Last time we visited Chibi-Mikuvan, it was still a mottled fleshy-pink blob of fiberglass, insulation foam, and microballoons. Over the past week, I went full artist and completed most of the paint and decal work that turns it into something vaguely resembling its larger namesake. 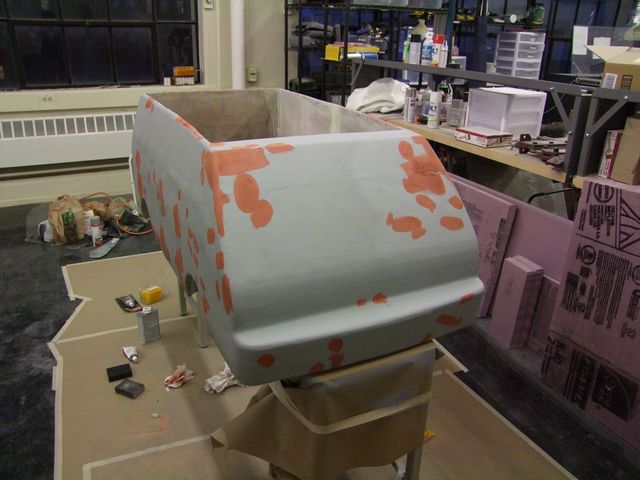 Corrections! I turned the pink blob of foam into something that looks truly diseased and disfigured.

This was taken after I already put one layer of primer on. I already knew that the fabric texture would show through because my layup was too dry – caused, it seems, by too much squeegeeing. I decided to not glaze or fill the entire thing and only focus on the really troublesome parts where the cloth looked basically unwetted (it was, but there was not nearly enough resin to fill the gaps). The primer was used more as a way to see where the true problem spots were. After the spot putty dried, I sanded it smooth and put on another coat of primer.

In retrospect, this was a bit of a bad idea. The spot fills with glazing putty looked great! after the paint, but everything else just looked so contrasting. If I were to spend much more time on this, I would have either microballooned or thinly Bondo’d the whole thing, to fill the texture, before any painting at all. 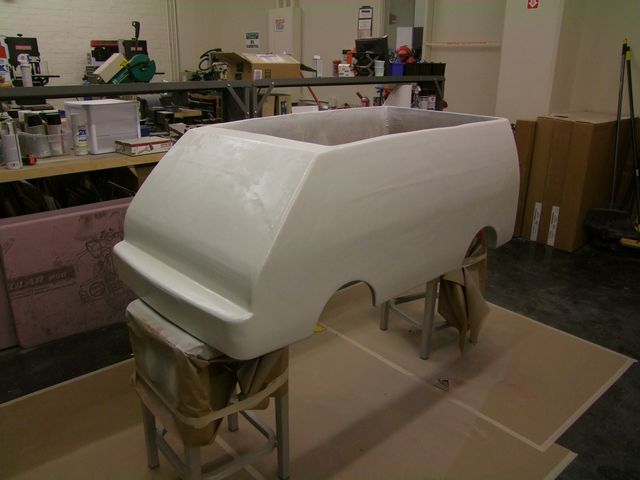 After all the primer and spot putty wads dried, I went over everything manually with 220 grit sandpaper to smooth the high putty spots down. After that, it was time for several coats of white. This took about 2 days, because I decided to do everything accessible from the top, wait for that to dry, then paint the less-critical bottom edges. 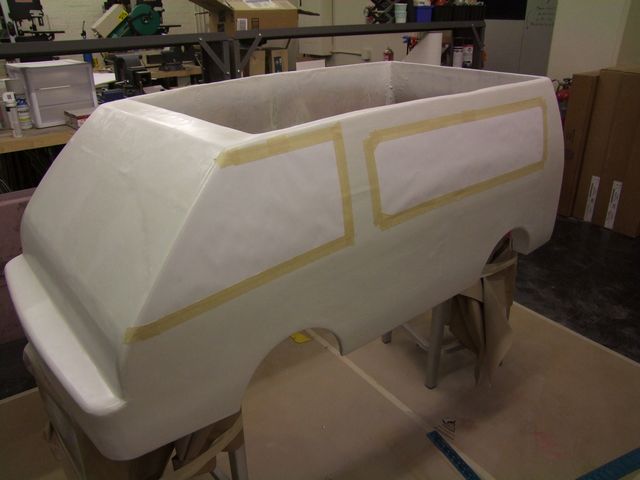 With the white base coat dried, it was time to add the dark gray and black window detailing. I used an “inverse stencil” method here, which I am sure is a legitimate thing but I re-invented it in 5 minutes on a laser cutter. I basically cut the outline of the shape I wanted, masking-taped it to the location I needed… 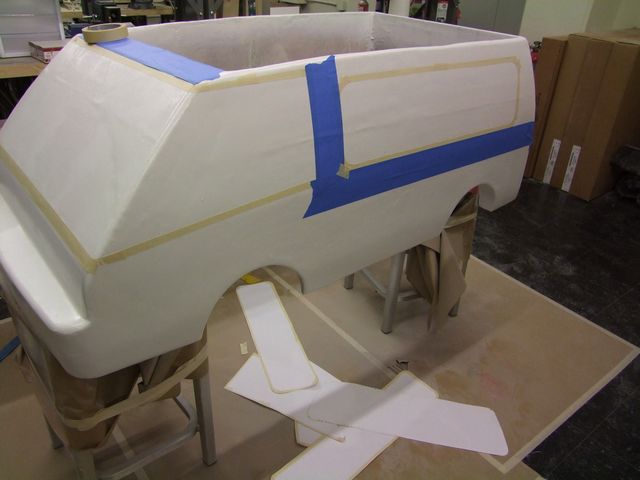 …and very carefully trimmed out the original paper, leaving a masking tape outline. Then, it was easy to apply much more masking tape to close off the areas that had to remain white. 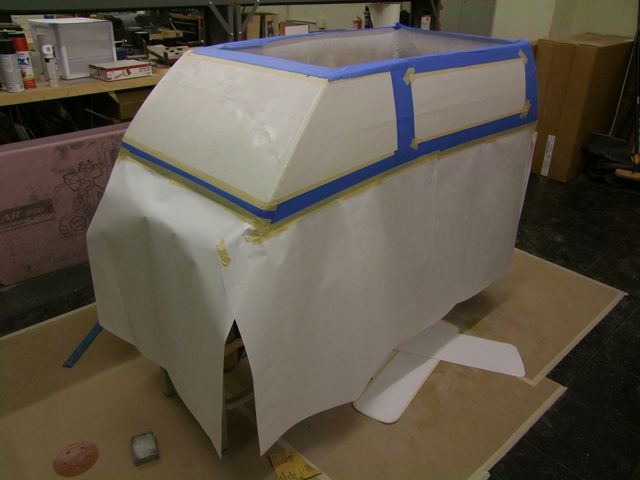 To give additional cover after I got far enough away from the masking tape edges, I just hung some spare poster paper down the sides. 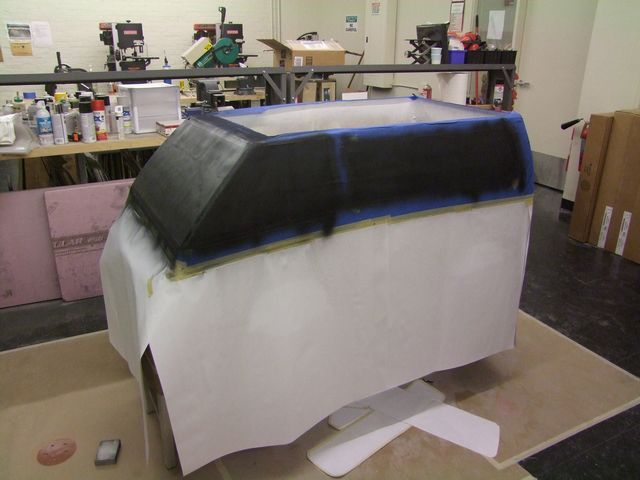 The first window coat is a dark gray. I wanted to use a more pure black to highlight the actual windows, and the dark gray to form what is the blacked out portions in Mikuvan’s actual paintjob – which I called “starship” for the longest time, but it’s actually called raccoon. – _ – (Concept image by Cynthia, of giant mechanical RWBY scythe fame. It shows a window blackout continuation I want to do eventually) 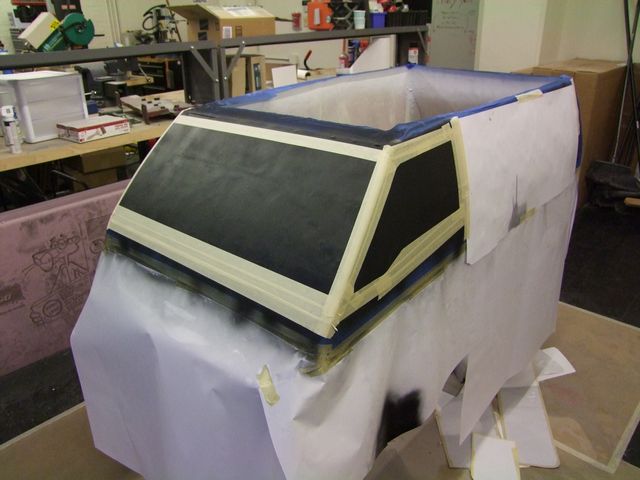 The next day, after the dark gray coat dried, I repeated the same inverse-masking process to mark out the windows. I planned on only adding this detail to the windshield and front door areas. 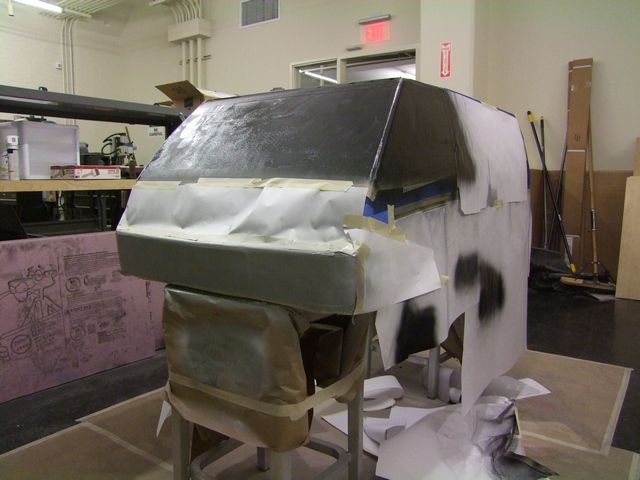 When the window details were “dry to touch”, I moved the masking paper around a bit and repeated the inverse stenciling for the front bumper detail. I decided to make this a medium gray shade since it reflects the somewhat sun-faded color of Mikuvan’s front bumper. 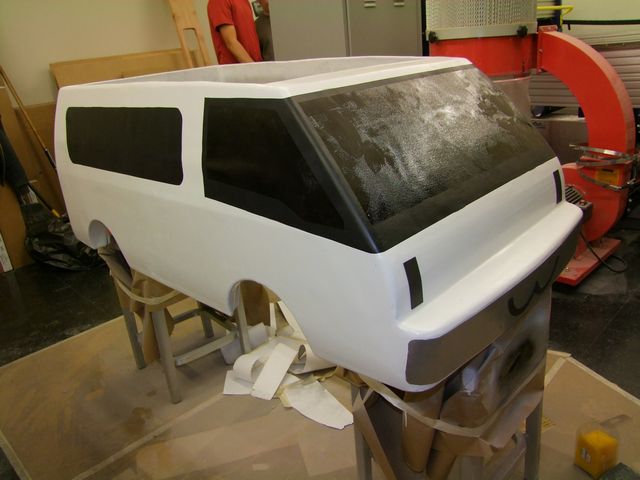 The next day, it was time to peel the masking paper and tape off!

So my “dark gray” turned out to not differentiate well with the pure black under indoor lighting conditions. It’s more noticeable outdoors or under natural daylight. I could have gone lighter a shade or two with the gray and gotten the same point across. After a gloss clearcoat, the two colors might look even more alike. 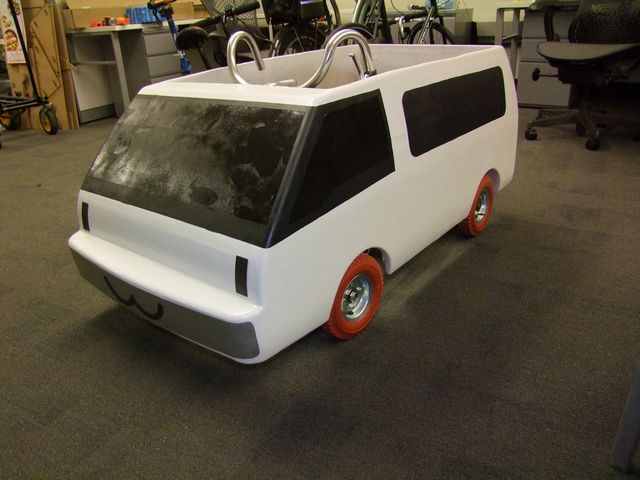 Test fitting the body! At this point, it’s missing detail lines. I decided to hire this out to Brian Chan, Maker of Like, Everything, Man. The rationale was that if I tried to make “detail lines” they would for sure end up being detail squiggles. Brian’s artistic background means his hand is far, far more calibrated than mine. We chose to only do a couple of major panel lines to get the idea across. 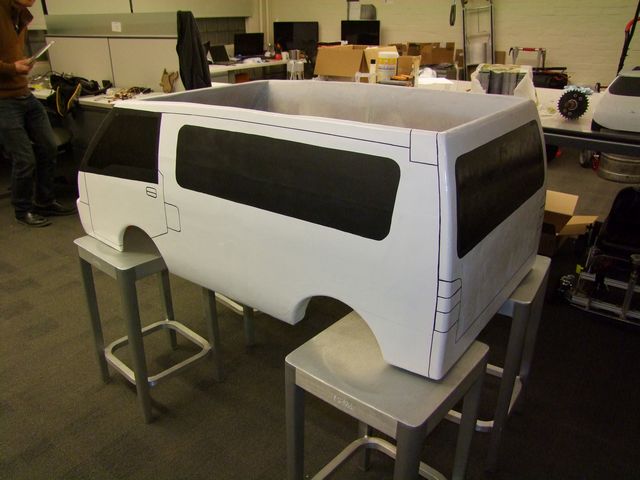 The operation was over quickly. My only bodywork task left is to add the taillight detail, which is going to be only an orange, light silver-gray, and red patch. This version of the body will not have functioning lights – short of maybe an EL panel or two. 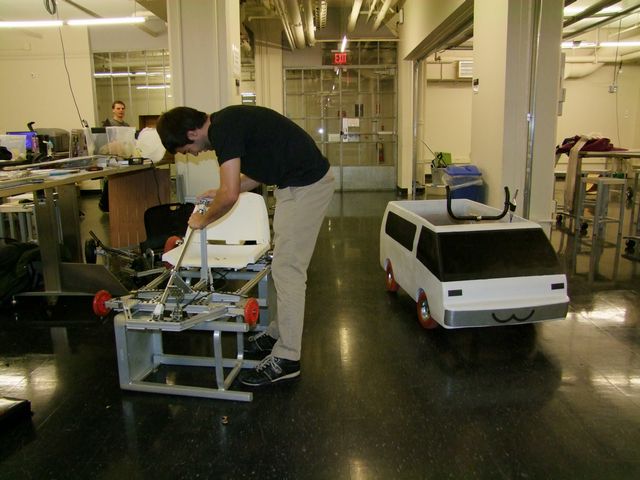 Chibi-Mikuvan is not impressed by your 2.00Gokart.

Notice the handlebar change between this picture and two ago. The body fitting told me that the big drop bars I got weren’t going to work at all : they were simply too huge. It restricted movement of the steering linkage, and the brake cables would run into my leg.

I went back to Cambridge Bicycle and had them yoink another junk handlebar from the pile – this time, it’s a plain U-shaped bar that was both narrower and did not curve back. This made it have way more upper body room. The brake handle position shown is likely the final one. 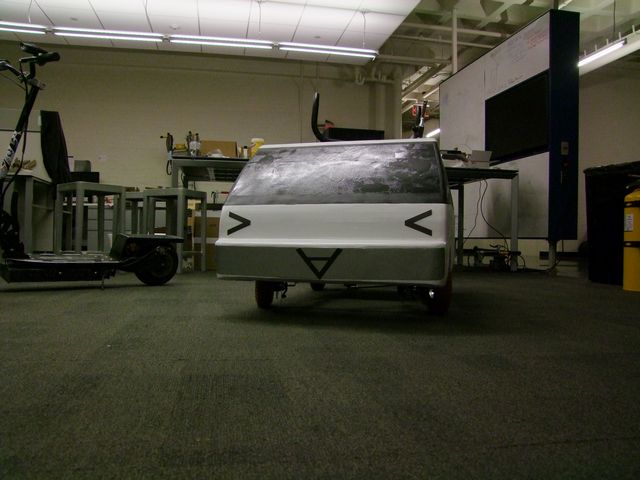 While my students were working on their vehicles on Friday, I popped out some more silly Shift-JIS emoticons out of the fridge magnet sheet. I plan to have a whole bunch of mix and matchable expressions, maybe for things like winning or losing or whatnot.

No, really, this was my whole motivation for building this entire thing. I swear.

The next post in this series will detail the extent of the mechanical work that’s occurred in parallel with the body shell. Finally, the Epic Inrunner has been mounted!