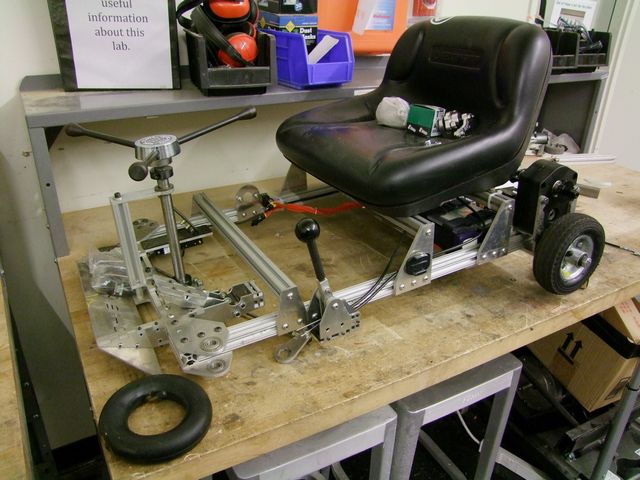 Even in non-hub-motor form, it’s been sitting in a pile of its own wreckage. During the late August summer go-kart finale, I raced against some of my own students and TAs, and about midway into the race, the left front wheel just completely locked up, skidded, and blew out. It’s even in the video: 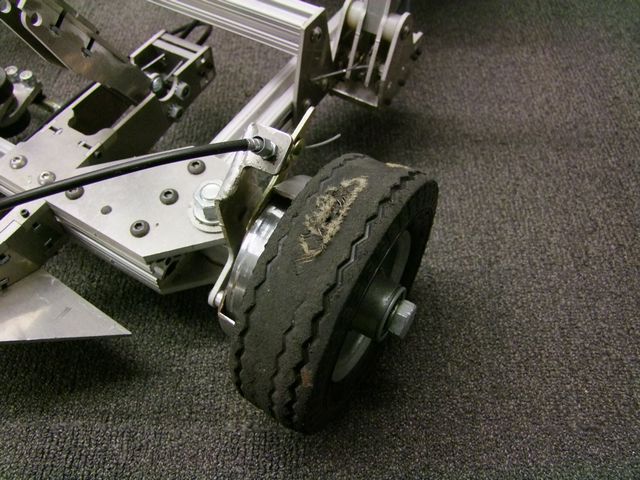 I never really got a chance to drive it well, since it was built during the rush of organizing the two kart classes, then rendered mostly dysfunctional right afterwards. Since then, it’s been living alternately under the bench and on top of it, reducing my moral authority to command people to clean their workbenches to near zero.

I originally used the scooter rear drum brakes as a parts examination, and came to the conclusion that no. But, it’s not really their fault – most of the failure is from the fact that the wheelbarrow tires are completely and utter trash – they’re out of true in every possible fashion! It’s almost as if they were not designed to be used on go-karts or something. Imagine that.

Anyways, I’ve had a mind to swap Burnoutchibi over to front disk brakes almost since I tried stopping with the drums for the first time. I figured that if the solution involved a custom non-shoddy hub for the tires anyway, then there’s no point in trying to machine or adapt a custom drum when a brake disc is just a flat chunk of metal.

That effort finally got rolling last month some time when I began to fiddle with my left over brake calipers. The brake calipers I speak of are the generic $10-20 scooter calipers commonly found on small gas and larger electric Chinese scooters, the kind retained by the likes of Monster and other scooter parts places. They’re simple, but get the job done. 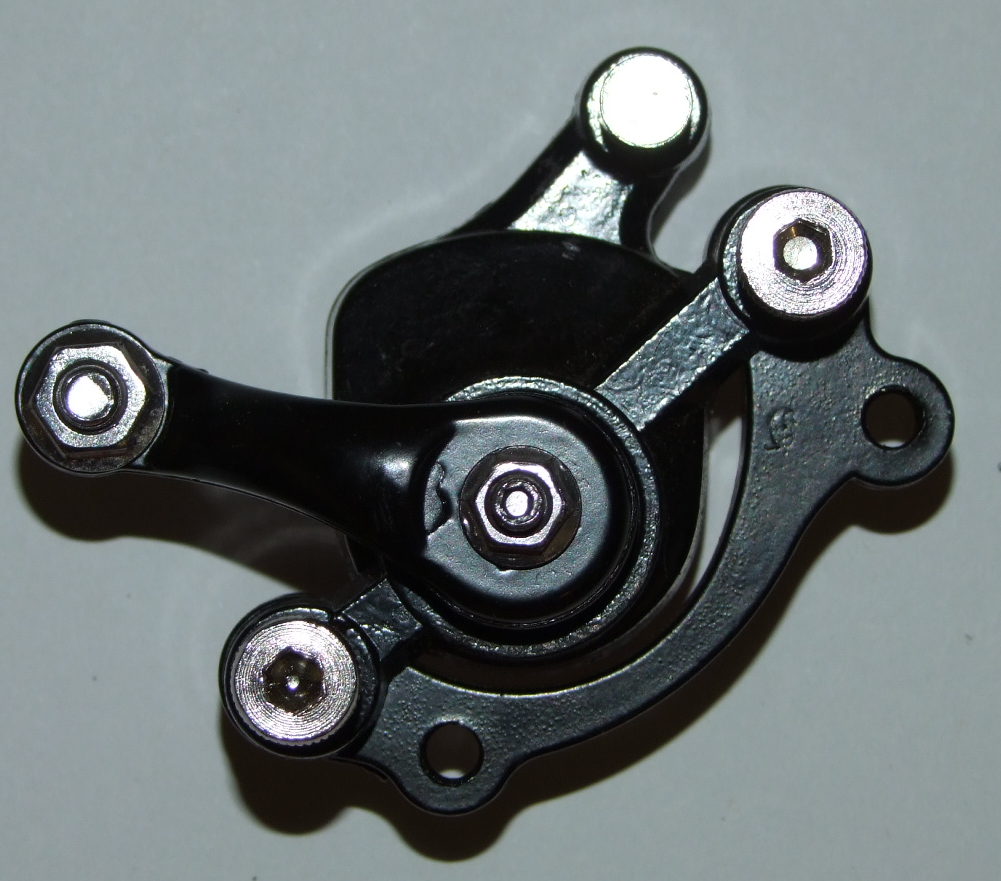 What I found in the course of my research about them is that nobody has ever modeled one in 3D. That I know of, anyway. Nor does an original model seem to exist at all. I’m strongly of the opinion that these things were copied once, then everyone else just duplicated dimensions without really thinking about what’s going on.

And so, desiring a model which I could line up in CADspace instead of assuming things about those mounting points, I set about correcting this issue by virtualizing the brake caliper. Now, these things don’t have a SINGLE straight edge to datum some dimensions off of, so I had to resort to tracing over an image: 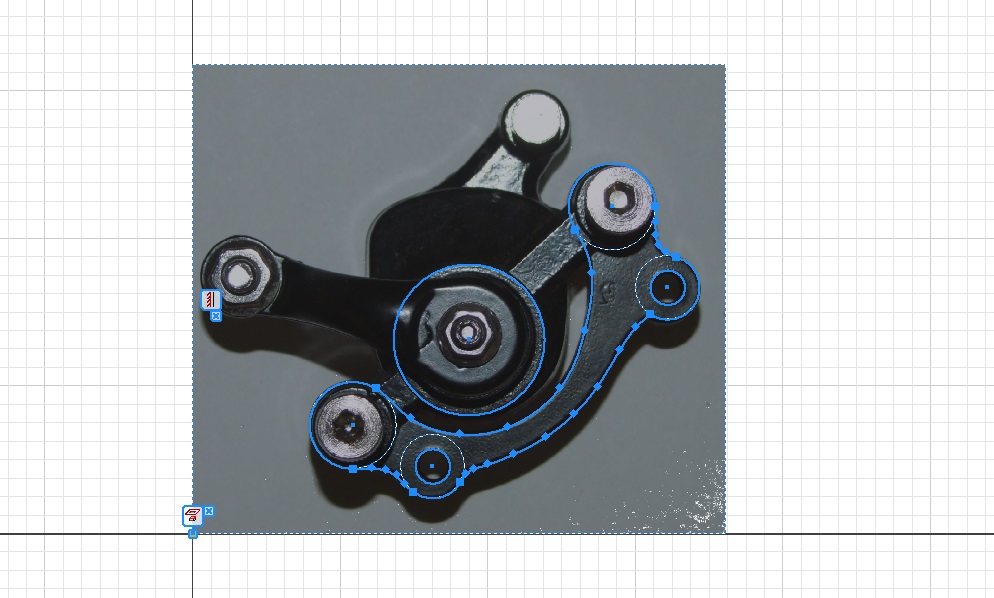 I took a very long-zoom picture of the caliper, end-on, and used it as a the backdrop to a sketch full of freehanded splines. The tight zoom is to flatten out perspective so I could capture all the features on top of each other. I didn’t do it perfectly, as some of the mounting screws might show.

This sketch became the basis of several features that used the profile information, in conjunction with real life caliper measurements, to generate some solid model parts of the caliper. Critical dimensions such as hole spacings were found physically and then those dimensions overrode the raw picture traces.

And there it is, a model of that which has eluded modeling. These dimensions ought to work for most generic small caliper brakes – later on, I show which ones I ended up getting more of, and even though they looked different, the holes and spacings were the same.

I’m putting this file up in the References section as brakecaliperrh.zip, in which are Inventor files, Solidworks files, and a generic X_T (Parasolid) for importing to other CAD platforms. Hole dimensions are exact to 0.1mm, and the axial spacing and thickness of the parts represent worst-case scenarios on purpose, such as designing to clear parts around them will definitely clear the calipers in real life. 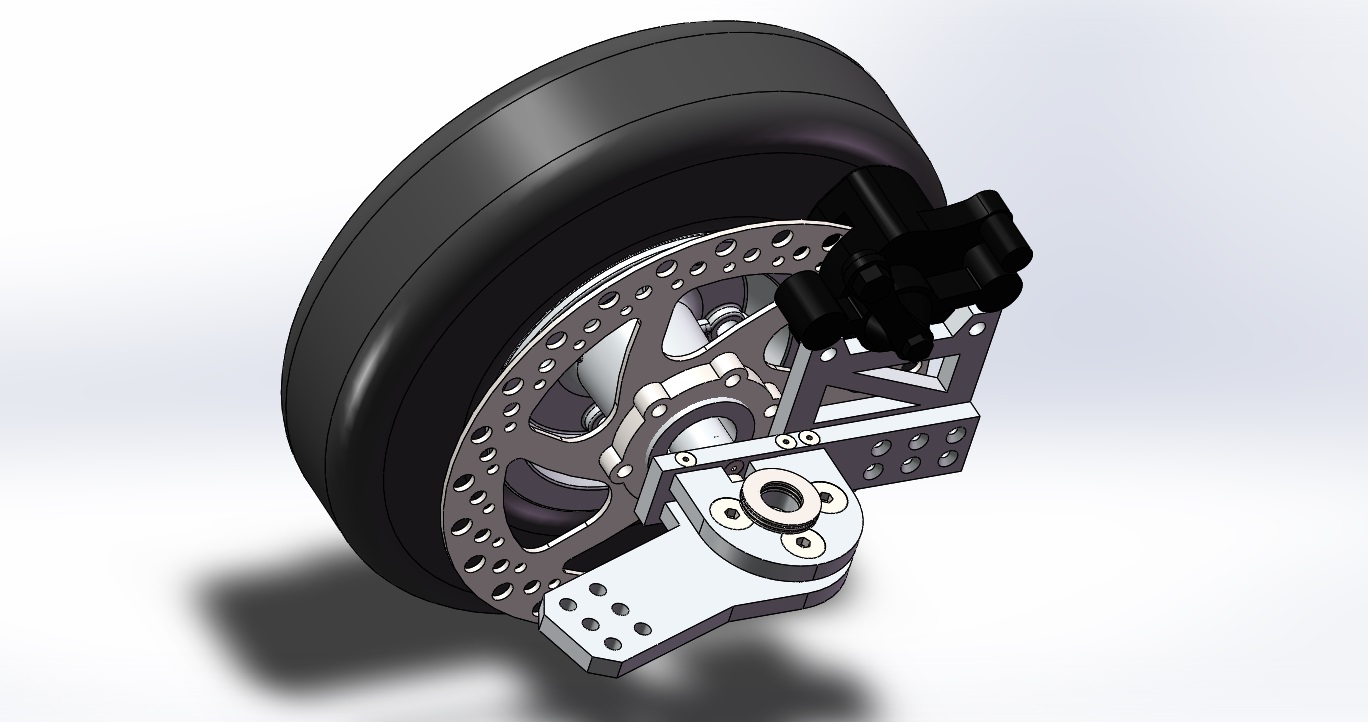 To verify, I grabbed a chunk of virtual Tinykart from Shane and dropped my caliper model into the ad-hoc physically located model they made for it. Result: Pretty much an exact match!

The next step was to adapt the new brake caliper to the front end of the kart. The placement of the holes and generation of the adapter plate was driven entirely off the position of the caliper. I made midplanes and mating axes to space the caliper out where I wanted. I was going to make a custom brake disc anyway, and the brake disc diameter was chosen based on not being so large as to hit the ground if the tire goes flat, using as much of the brake pad surface as possible, and being large enough to clear its own hub mounting bolts. Ultimately I decided on a 100mm (or 4 inch) disc.

A new ‘upright’ block, which the wheel spindle bolt tightens into, is required because the axial spacing of everything was so different. This set was made hastily and sort of out of square anyway.

This is the new combination hub. Brake disc mounts on the little end, and wheel mounts on the big end. The tube in the middle is a 3/16″ wall DOM steel tube with slightly machined ends. It’s basically a smaller, cuter version of the average commercial go-kart hub, like some of these. The discs are to be waterjet-cut, then welded to the steel tube.

I would have cranked these out of some aluminum billet, but I wanted to pilot this method for Chibi-Mikuvan, which will use a slightly larger version of this.

The idea is to strip the shitty rolled steel hub completely out of those wheels, using only the stamped rim halves and bolting them to my own hub which will, in the best of circumstances, be more true-running and less… I dunno, shitty than the stock wheelbarrow-grade hubs. 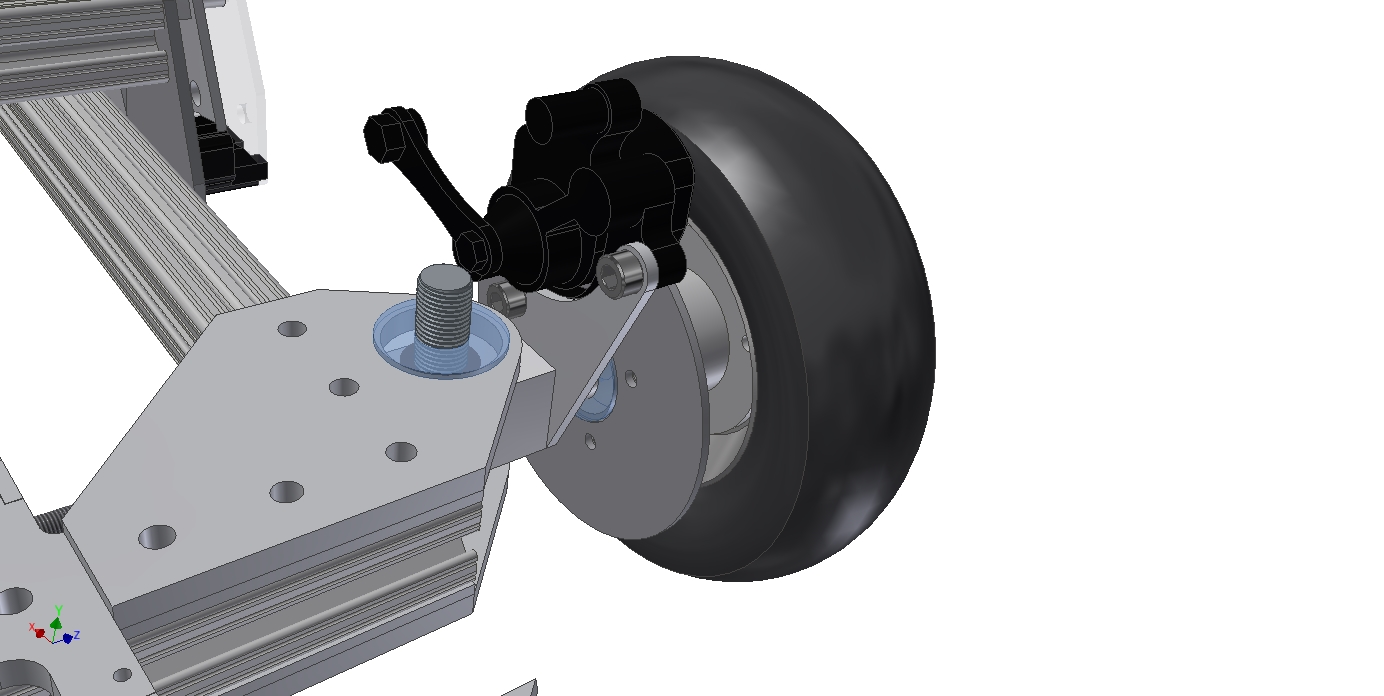 An overview of the new assembly to be manufactured. No matter what, I couldn’t get the disc brake design to have the same front track (width) as the older version, so this one will have slightly wider track at the front – but only a half inch. Not enough for anyone to notice but my alignment-obsessed self. That’s the one downside of using disc brakes with these smaller scooter- and handtruck- type pneumatic wheels. Unlike a car tire which is deeply dished on the inside to fit the hub, steering knuckle, and braking hardware without it all sticking out, here you usually just have to deal with a scrub radius of 2 or 3 inches.

(Unless you want some seriously wild camber. Stancekart?) 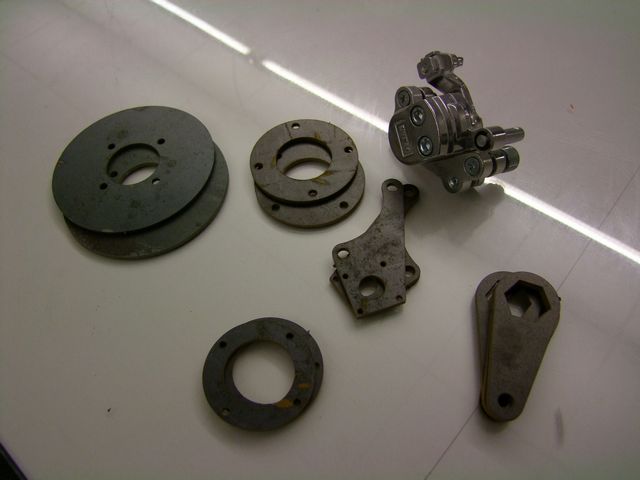 Brake rotors, hub components, and the caliper adapter all cut out from 11 gauge cold-roll steel (0.120″). To the right are some replacement steel steering links. The aluminum ones, while they worked in principle, started smearing their hex bores out eventually so the steering backlash began growing with each test. I decided to just make a weldable version; the geometry is otherwise identical. 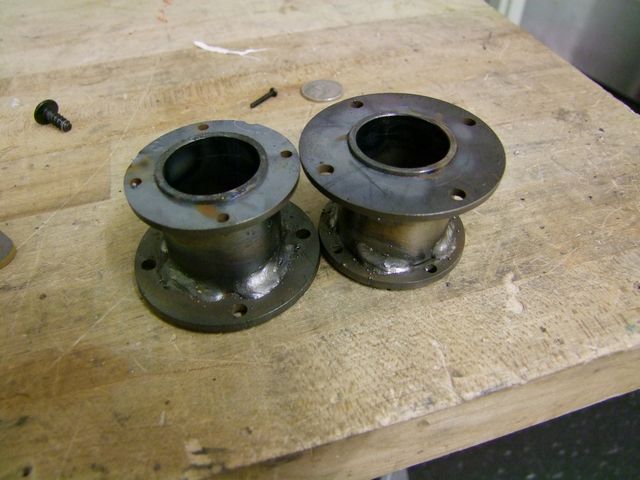 The beads were dropped with a MIG welder for expediency. I machined each steel tube end to be a slight press fit in order to keep the pieces from warping while being welded.

An interesting feature I noticed about the steel tube I got from Speedy Metals was that the outer and inner surface were both very shiny and tight-tolerance. This is in contrast to most DOM style tubing where there is a visible weld seam on the outside and inside, and the sufaces are dark with oxidation. This makes me wonder if it was actually extruded – I’ve heard of extruded steel but wasn’t sure if it was a common process.

So far, this only applied to the 1.5″ OD, 3/16″ wall stuff I got for BurnoutChibi – the other sizes that came in the same order for Chibi-Mikuvan are normal looking. 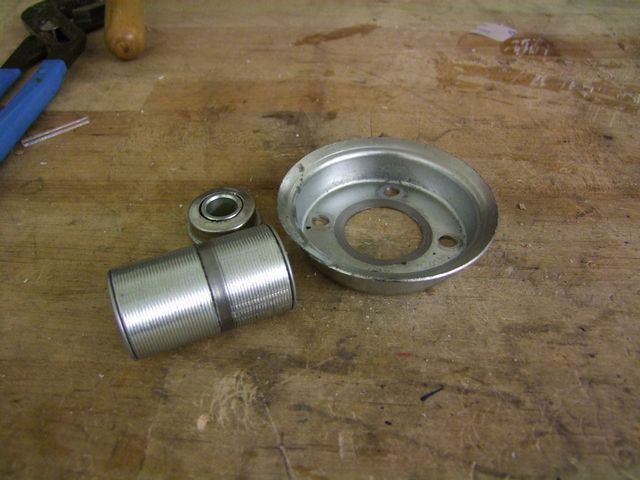 To cut off the stamped rim from the hub, I took a boring tool to it, cutting on the back side with the machine running in reverse, until it just popped off. 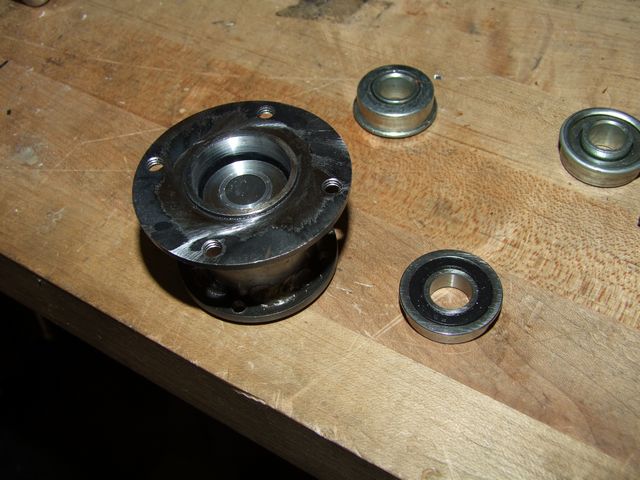 Using some 1″ OD by 1/2″ ID aluminum extruded tube, I made the internal bearing spacers. The faces of the spacer were turned down to leave a little shoulder so the whole thing wasn’t rubbing on the bearing seals and races. There’s no reason the spacer has to be so thick radially, but the close match between spacer diameter and hub ID means there’s less playing “Guess where the spacer is!” when shoving the axle through. 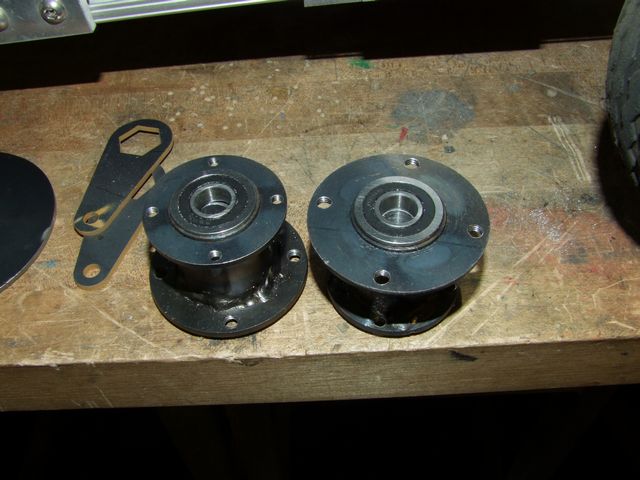 Finished hubs with holes tapped. The wheel side threads are M6 x 1 to reuse the bolts they came with, and on the other side, the brakes are #10-32. Yes, mixing metric and U.S. threads. Yes, I am a lazy american. 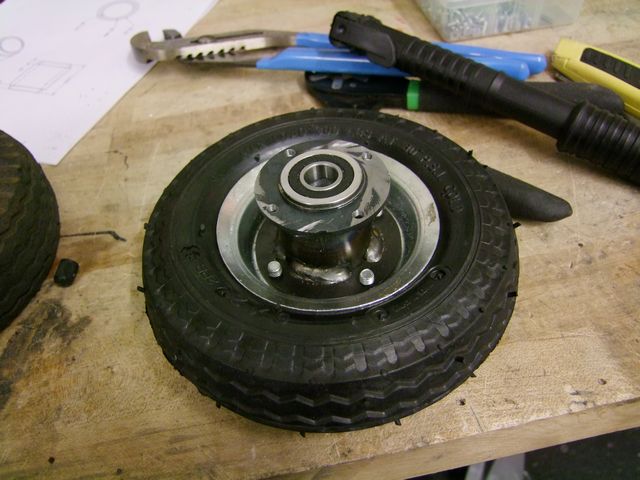 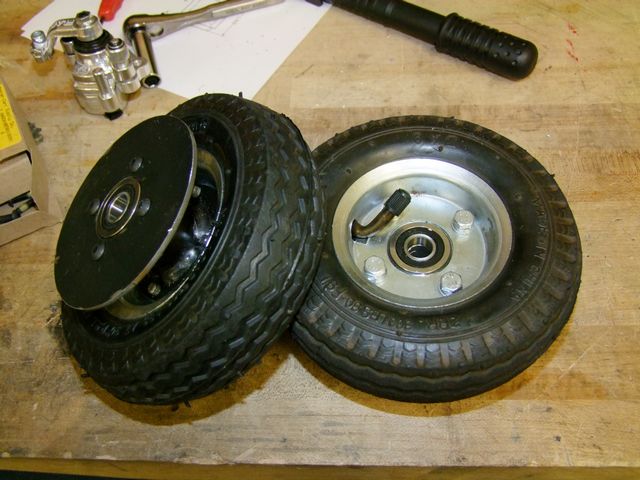 And both wheels completed.

The hub is designed such that the small projecting boss of the steel tube is the right diameter to align the center hole in the wheels. This contributes immensely to true running. Combined with the flat hub and real bearings, the amount of wobble in the wheels is now minimal, and practically none at the brake disc. 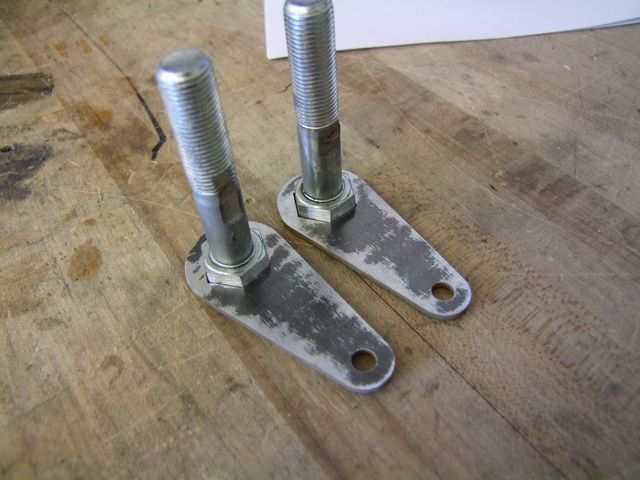 Moving onto the new steering links, this is how they fit onto the existing kingpin bolts. 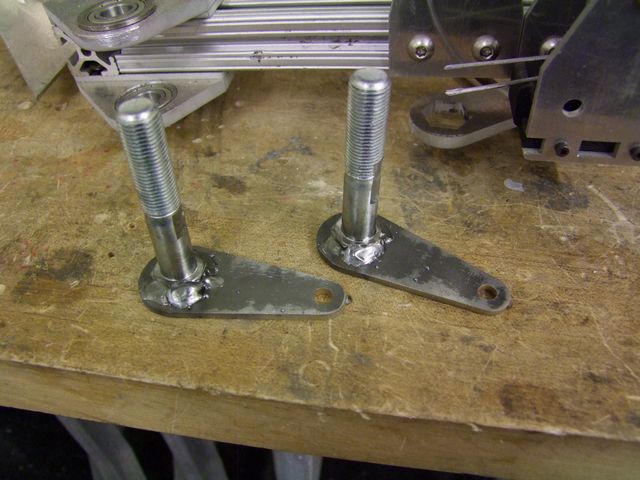 And they are welded the same onto them. Now there’s no more need to constrain them from the bottom with a bolt and washer, and ideally this system will have no backlash…

What I have to do now is to remachine the upright blocks and then mount the wheels. At the least, then I can try a test drive to see what difference it makes.

Next on my list with Burnoutchibi is a rebuild of the shifter mechanism – while the principle was sound and it worked great in the short tern, the aluminum ball detent slots rounded off pretty quickly and right before the race, it was pretty hard to keep in gear. I’m going to move towards a spring steel bar (incidentally the same spring steel bar that I made 12 O’Clocker’s front legs from) that can bend in and out of slots, like a lawn mower shifter gate. Since there’s only two require positions, it’s not exactly difficult to come up with a pattern for it!