In the past few days, basically from Sunday to Thursday, I’ve managed to put something like 150 miles on Mikuvan, which is no small feat for purely local – Boston, Cambridge, and associated suburbs driving outside of regular daily commuting. For me, the “daily commute” is something like 1.1 miles by scooter, so for the most part said driving consisted of helping friends move large objects – it being end-of-semester moveout season, picking up more cruft on Craigslist, and purposefully going way too far westwards just to grab lunch (I sincerely recommend Blue Ribbon BBQ in West Newton). And even participating in helping search for a stolen car, but that’s a story for another day.

All in the name of Science, of course – I’ve pretty much been doing all this just to observe the vehicle’s behavior under different driving conditions, ranging from highway to extremely low speed start-stop city driving, to the occasional stoplight pull which will remain undiscussed.

I haven’t been able to break it. For all intents and purposes, Mikuvan is a fully functional car. There hasn’t been any stalling or overheating, no more fluid leaks, no rough shifting or other transmission business. There’s quirks and worn parts typical of a car about as old as I am – the front blower is not functional and the power mirror (oh boy, power mirrors!) switch is also broken, and the air conditioning belt isn’t hooked up (and I’m sure the system is totally drained too). Plus, those rust patches.

The de facto beginning of summer was marked by the start of incessant rain, after which I assume it will actually get warmer. I took the opportunity to give the whole outside a proper washdown, aided by the rain. It had been living under a tree for a month or more, so there was tree drippings and bird shit everywhere, and other environmental deposits. 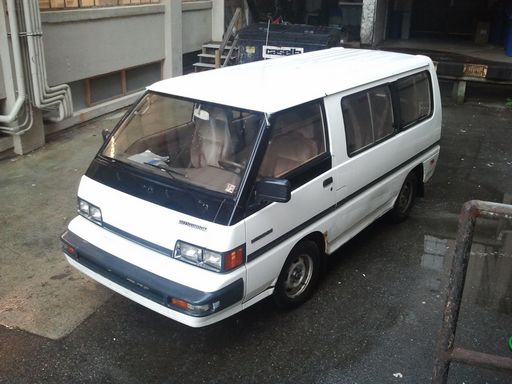 Lookin’ pretty good. I got rid of most of the grunge from the presumed side-swipe damage on the left lower bodywork also.

One of the nice features of the great N5x building complex, where MITERS and other shop-nests are, is that there is a two-post auto lift installed in the area where the automotive racing teams (FSAE, Solar Car, et. al) work out of. Many students have used it in the past for wrenching on personal cars, and I now join those ranks: 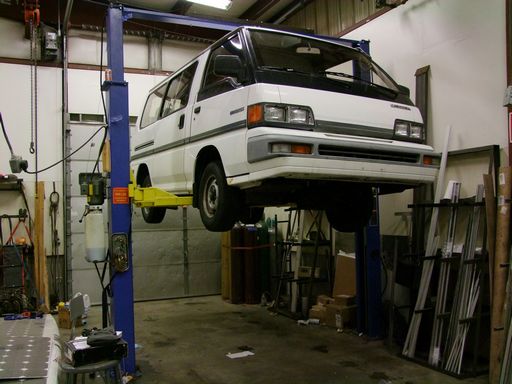 I ran into an interesting problem in that my wheelbase was too short to swing the lift arms under the frame. To fit, I had to remove one pair of lift pads (one is at the end of each arm), swing the front set under, manually push the van a few inches back to clear the rear set, and then reinstall the pads in-place.

The goal of hovering Mikuvan was to perform a full mechanical inspection of the underside as well as to clean the engine and transmission to locate the source of a very small but persistent oil leak. 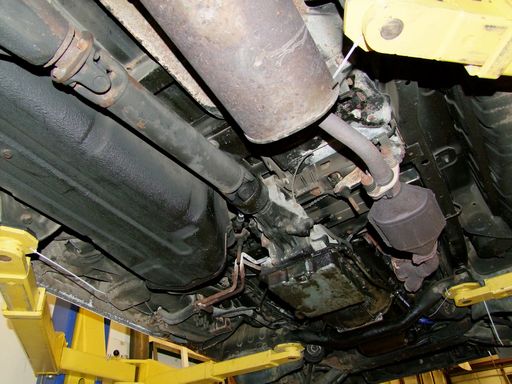 The belly of the beast, front to the lower right. The engine seems to have been burning or leaking (…or both?) oil for a long time, so there were “sludge bunnies” as we called them everywhere. Most of the underside frame near the engine is coated in a thick sludge film. I suspect it has helpful anti-rust properties, but still. Eww.

For the uninitiated, Mikuvan is actually mid-engined and rear wheel drive. The engine and transmission center of gravity is a few inches rearward from the front axle. 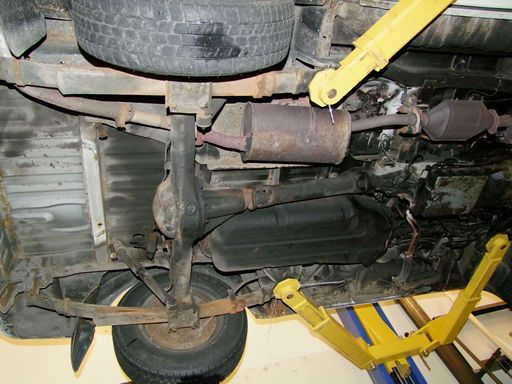 Here’s the underside rear. The clean spot to the left was where the spare tire lived; I had removed this because the rim itself was basically rusted out, and also removed the tire hanger in the process. It’s also where I think the eventual Siemens 1PV5135 will live. There’s many big square frame rails to attach things to in this region. Attachment strategies have been floating in my head and are varied – one part of me thinks I should just buy or Procure Through Alternative Channel a Borg-Warner eGearDrive, a transaxle designed to mate with  the Siemens motor. The other part thinks flipping the diff around and mounting the motor longitudinally (shaft pointing front-back), with an external 2:1 custom reduction, would be better. The differential is a native 4.22:1, so an external 2:1 is almost perfect.

A minor third opinion is to use the guts of the former Mercury Milan hybrid transmission from the old Electric Vehicle Team project, the ELEVEN. It’s basically an embedded eGearDrive, but just a pile of eGears that would require a custom housing. But it comes with a roughly 8:1 total ratio and a parallel-drive (not right angle) differential. 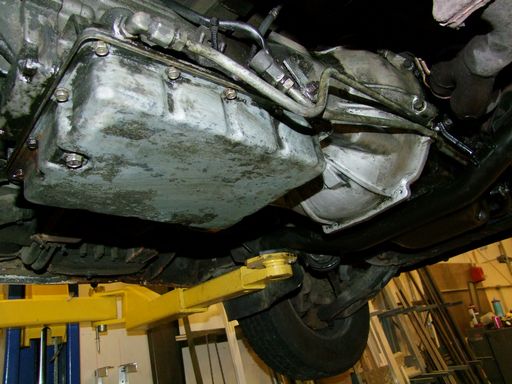 Using several cans of carb, brake, engine, and colonic cleaner, I gave the underside powertrain components a scrubdown. Every once in a while, I’d notice a new dot of oil on the ground while performing pre-drive fluid checks. With the engine and transmission so coated in junk, it was hard to see where it could have been coming from. Hopefully, now, I’ll see a little dark brown slick or something from the point of leakage. 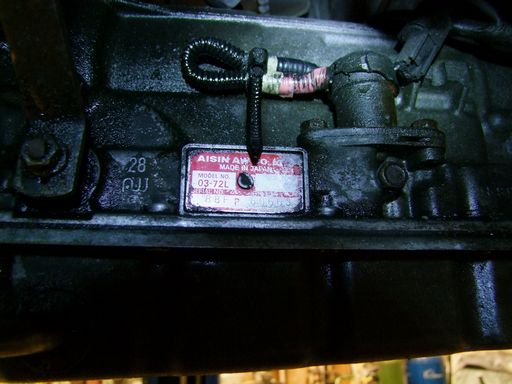 While scrubbing the transmission, I actually found the nameplate! It had been so thoroughly coated I haven’t even noticed it was there.

Interesting enough, the first Google ping for “4G64 AW03-72L” (my model of engine and transmission) is this very theraputic and fascinating teardown video, set to… Christmas music? I’d get to about the 7:00 point and then have exactly shit clue about how to get it all back together. 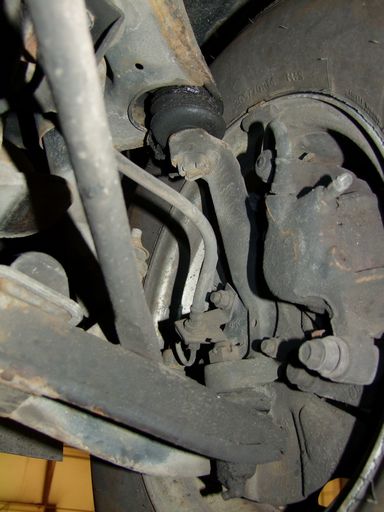 While lifted, I also went around to the wheels and checked suspension and bearings. Nothing seemed obviously bad about the suspension, but I’m also not a professional suspension inspector. The rubber bushings were not cracked or looking otherwise fatigued.

The bad bearing up front has been confirmed – the front right wheel is a tiny bit loose in all directions. If there’s one thing I know about most car axles, it’s that they use tapered roller bearings which must be preloaded (forced together at all times), so any wobble at all is a bad sign. The alleged (now confirmed) bad bearing had been manifesting itself as a rumbling noise at moderate speeds. I haven’t noticed that wheel center becoming substantially hotter, but I’m also not keen on waiting until that point.

No other wheels were found to be loose, but so long as I’m taking one side apart, the other side will also be replaced at the same time. Guess I know what’s coming up next!

While I was initially excited about taking the summer to get most of the way through an electric conversion, I’m now further in support of the second thought – keep the engine for now, and address all the little mechanical and electrical problems first. Get it in good mechanical shape first, patch the rust holes, and fix the accessories. That way, when I do finally manage to grenade the engine or commit fully and drop it, the rest of the vehicle is ready and able to drive right away with a new power system. Whereas currently, even if I were to somehow install the electric powertrain tomorrow, I’d still be faced with a bad wheel bearing, no front fans (forget even air conditioning!), body rust holes, and such things. Since I don’t depend on a car for daily commuting, I can afford it to be a science project and learn how to address these issues.

Plus, as long as I’m paying insurance on it, it might as well be functional and automotive and stuff. My policy is set to expire, with option to renew, at the end of October, which coincides nicely with the season that Mikuvan should not be on the road to avoid further rust spot damage from road salt (if those have not already been sealed by then).

I think the battle plan will be something like this, in no particular order