Excuse me while I try to explain why this thing exists.

Basically, I spent 3 days at the GT Invention Studio putting together a new 12lb bot after binging cordless saw motors at Harbor Freight. The bot is a “full body” spinner, classically called a “thwackbot”, which has a very quick and powerful drivetrain (made of the aforementioned cordless saw motors) to spin itself at high speeds. I have no reasonable explanation for the Carly Rae Jepsen part. It doesn’t really need to exist.

But the benefit of it existing is one more entry for me at Robot Battles 2012, as well as a chance to explore another possible way to press cordless tools into service for robotic drivetrains. I haven’t had a 12lber in a long time, and this thing is fun to drive.

Long story short, the Model 67026 18 volt cordless saw from Harbor Freight is usually on sale for $25 to $30 and contains the following: 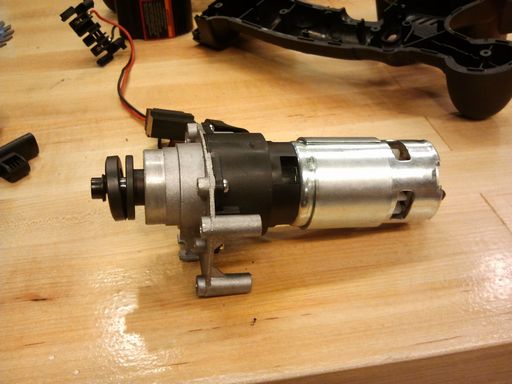 Beefy. I actually binged 3 different types of cordless saw: a jigsaw, a reciprocating saw, and the cordless circular saw. I might make a Beyond Unboxing post about the three some time, but right now the conclusion is that the jigsaw and recip saw are too specialized to be of immediate use to a robot drivetrain. 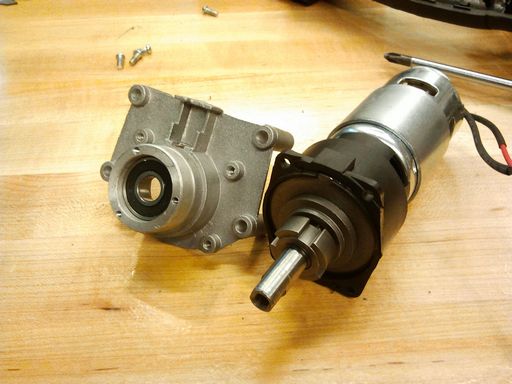 Unscrewing the gearbox itself from the weird cast output structure, I found that the ring gear was actually well-contained and modular. A large iron-bronze bushing pressed into the ring gear cup supports the 12mm-stepping-to-10mm output shaft. The nub thing is the spindle lock for changing out blades and doesn’t transmit any torque. 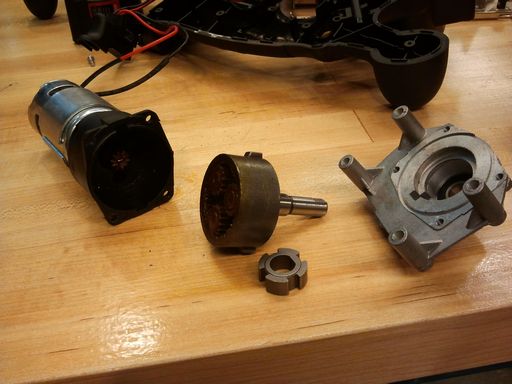 The gearbox is a single stage planetary gear with teeth much larger than drill motors – looking close to 1.0 module (24 pitch-ish) with an 8mm face width, though I didn’t measure diameters. The ring gear has 42 teeth and the pinion has 10, making this a (42/10)+1 or 5.2:1 gearbox. With a 3800RPM rated output. That’s pretty damned fast, so it might not be directly useful for a drivetrain in most cases, but certainly with external reduction or just tiny wheels.

I decided to find a way to use the gearcase by itself, without the strange casting. The iron-bronze output bushing of the motor lends itself well to using a stacked plate configuration to approximate the stepped profile of the business end of the gearbox. Behold: 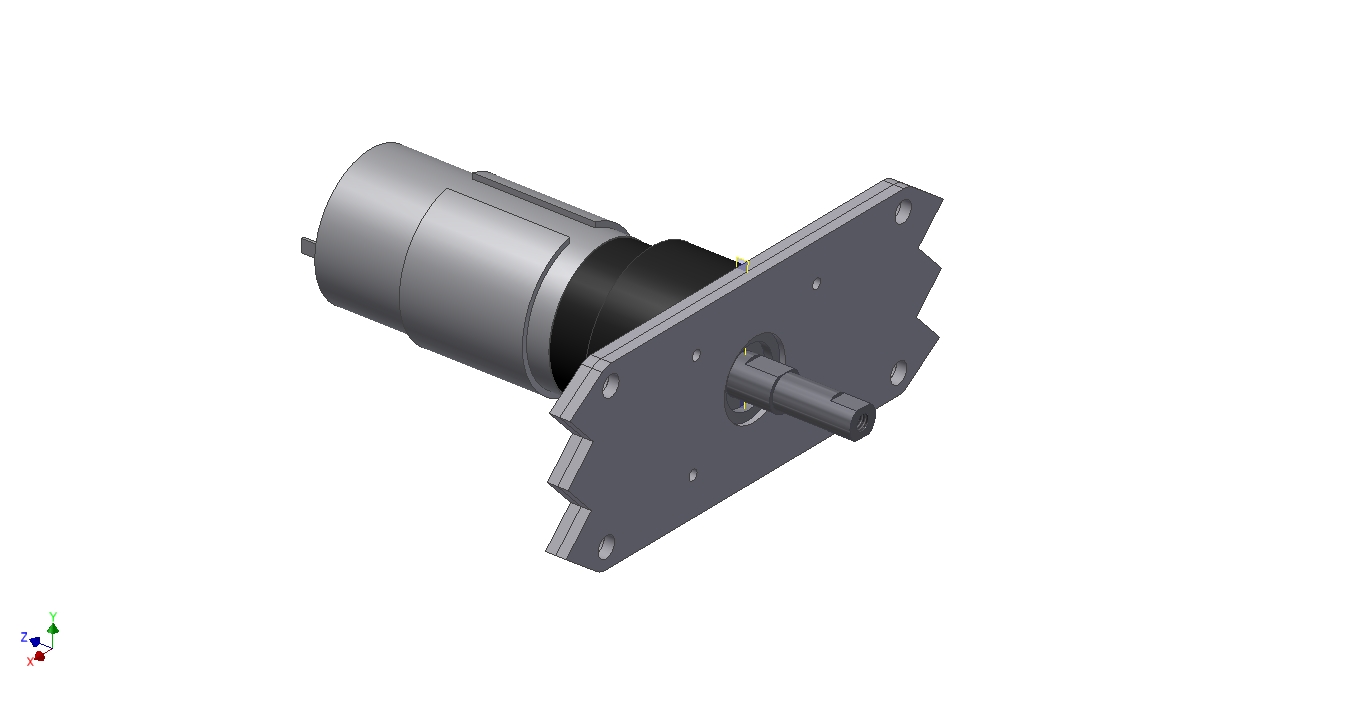 The first (innermost) layer supports the plastic gearcase, and the second layer holds the bushing in place. The dimensions worked out very nicely.

So what does the rest of this thing look like? 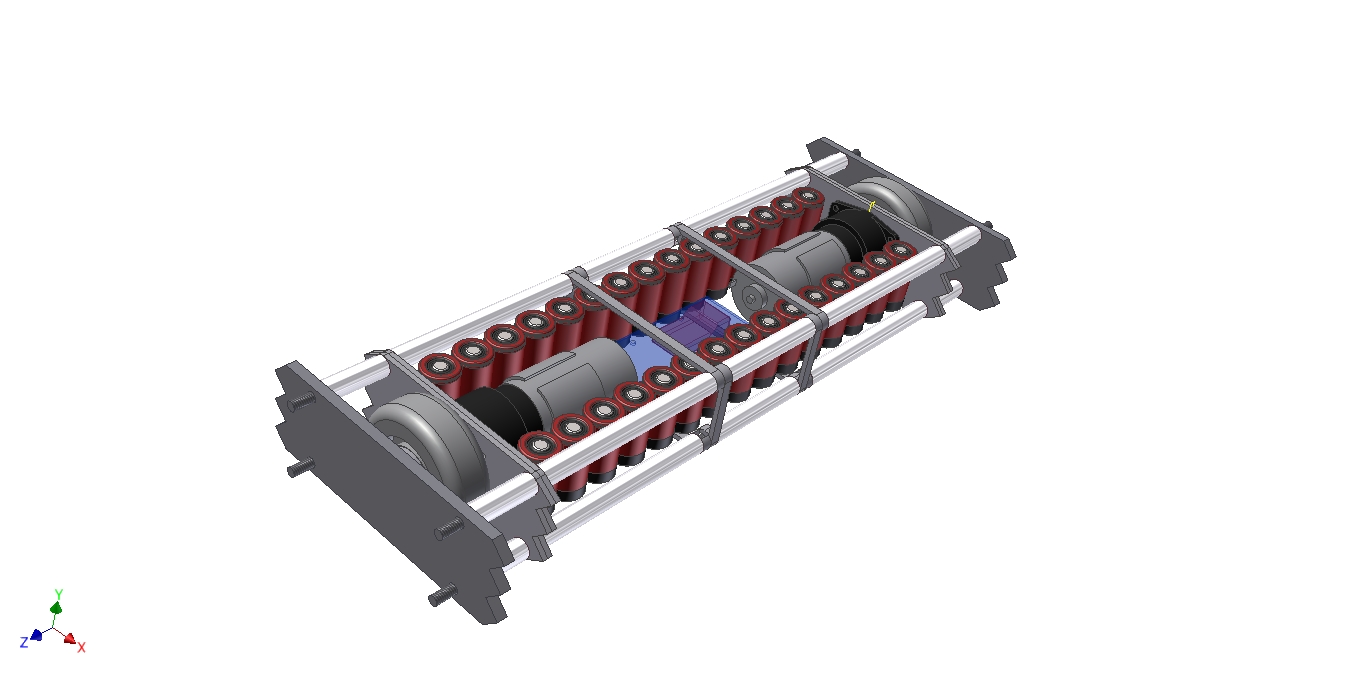 I generally have trouble explaining my design rationales, so that’s it. I basically decided it was going to be a 2-wheel-drive “thwack” type bot. A few frame drawings were made and discarded before they reached the 3d model stage. One plan was to make the bot essentially round and have steel knocking teeth on the outer radius (looking much like a “shell” type spinner), but it was deemed impractical in the limited time I had. Another design had the wheels inboard, only 3 or 4 inches apart, to maximize the inertia of the frame. I did want to retain significant mobility, so a very narrow wheel track with the motors facing inwards was ruled out. I then started the frame design constraint by spacing the motors far enough apart to install a Ragebridge board if needed, since I had packed a spare.

Finally, realizing that the easiest way to mount the motors was with thru-holes and standoffs, I elected to make the robot entirely from standoffs and plates, which can be quickly whipped out on the GTIS waterjet (yes, even when I escape MIT, I cannot escape my waterjet addiction).

Four long sticks of grade B7 threaded rod clamp the frame together. It’s an essentially one-piece frame that can’t be messed with without taking the nuts off and hence loosening everything. However, when the rods are cranked, the frame should be stiff enough to not deform under the hits it can deliver. 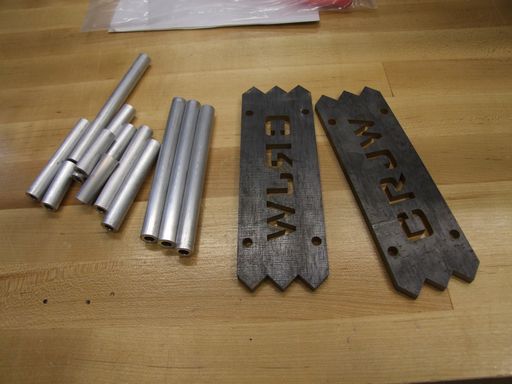 Exercising my Atlanta resources for the first time in years, I went to Metal Supermarket in Doraville and bought some 1/4″ steel plate and 1/8″ aluminum, then drove to McMaster-Carr (yes, to McMaster – this was something that regularly happened during high school FIRST seasons) for the rest of the parts. I also bought some wire and connectors from Hobbytown USA in Duluth, another one of my old robot trip stops 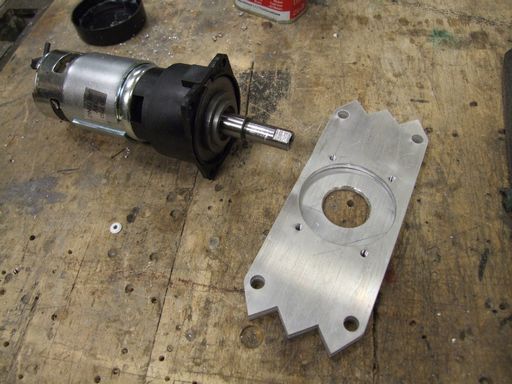 This is the series of 2 plates mentioned previously. I had to do quite a bit of “deburr-boring” to get the holes to the proper dimension – must have screwed up measuring the roughly molded plastic. 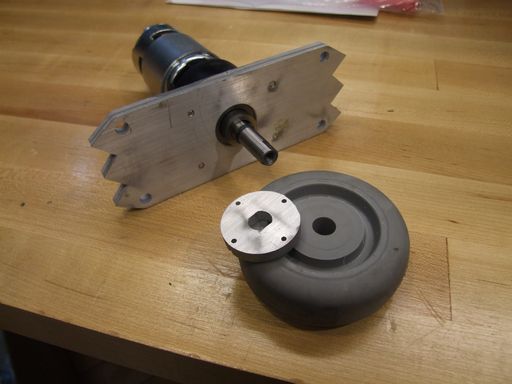 The wheel mounting arrangement is a little unconventional. The wheels are 3″ “McMasterbots” wheels, the same that I will also be using on Überclocker. The width of the wheel, plus a little here and there, is perfect for suspending off the 10mm portion of the shaft. A small spacer, machined to the correct length, will be the axial constraint method. The shaft otherwise has no snap ring grooves or shoulders to axially locate it when force is applied into the end – i.e. pushing the shaft into the ring gear. The spacer will act as a thrust bearing in this situation, and I made it appropriately out of the iron-bronze output bushing found in a typical drill motor (it can be seen on the shaft in the picture).

The end of the shaft has a convenient double-flat profile, so the wheel hub is just a single waterjetted biscuit of aluminum with a matching double-flat bore. 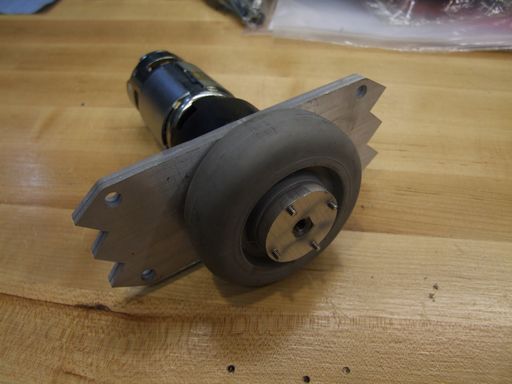 The holes in the wheel were drilled in-place using the hub biscuit as a template. The wheel bore itself was enlargened to 10mm first using a lathe and drill. This whole thing is retained by the original blade locking screw from the saw. 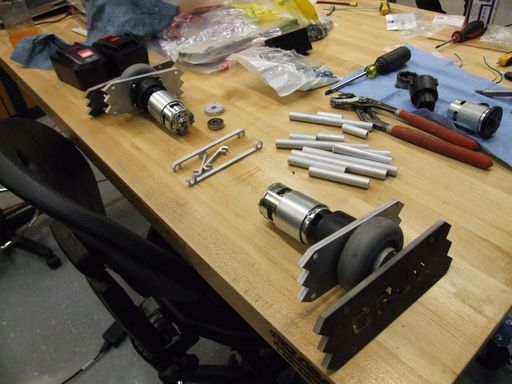 Here’s the bot laid out in pretend form, before I threaded the long rods through. 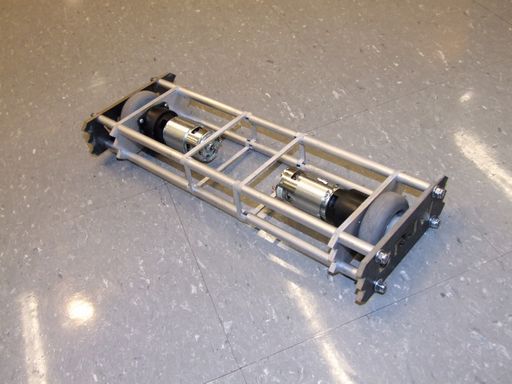 And here is the whole frame bolted together.

I like those middle rail bulkhead things alot. At first, I was intending to waterjet whole rectangles with thru-holes, but decided it was a waste of material. I split each rectangle into sides, and each side actually looks like a little open-ended wrench that slides over the threaded rod (see previous picture – they’re next to the frame standoffs). Therefore, I can install them after threading all the standoffs through, in-place. The idea was to have a fast way of dismounting electronics if I needed. 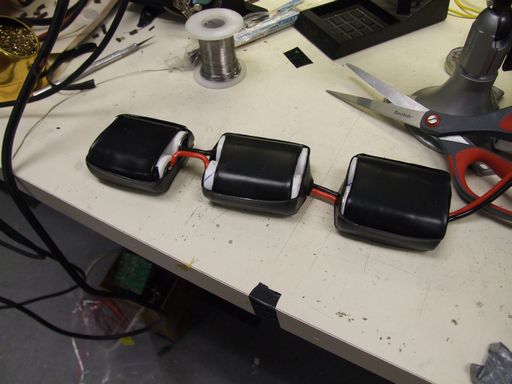 Speaking of electronics, I decided to fall back to a classic solution of mine: A123 cells. I have 2 strings of 15-cell nicads drawn in the model, and the intent was to use the stock batteries that 18v drills came with. However, the cells are very low quality in those cheap things, and I’ve measured them as dumping *10* amps, max. In a sub-C package.

Kind of derpy. Even with two strings in parallel, the voltage stability would be unacceptable with those 775 motors throwing the bot around. On the contrary, the A123s can happily shit out 60-80 amps briefly.

I made a “flexy” pack since it needed to span the bulkhead and the A123 cells were too wide to fit in the design. The pack is 6S1P, and there will be 2 in the robot for 6S2P, or 19.2v at 4.4Ah. Much more substantial than the 18v and 2.3Ah the drill packs would have offered, and these weigh less. 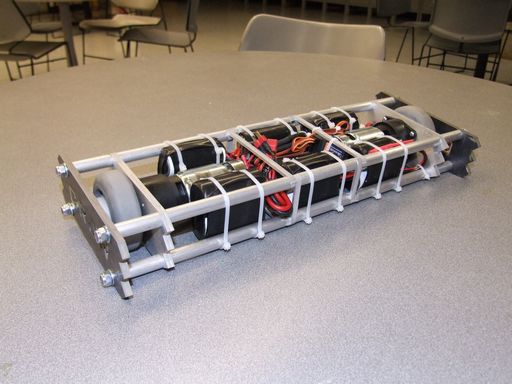 I’m gonna have to remember to add more zip ties to the thing in order to retain the batteries radially.

These motors hit 3800rpm at their native 18 volts. This results in a linear speed of something like 35mph tops, but I will never get up to that speed on stage, clearly. The bot does handle quite well for being so fast, because it’s also extremely wide and has high traction. The maximum rate of spin with the motors going full opposite is about 800RPM, for a linear tip speed of around 40mph.

Way too fast for Robot Battles – there is a 20 feet-per-second max anything speed rule. Luckily, on 50% dual rates set by my transmitter, the spin rate is much closer to 20FPS. So this bot will just be run with my radio’s gentler stick settings. 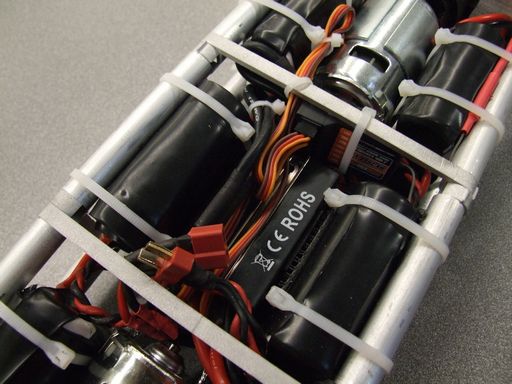 So what’s controlling this rig? I brought along my spare 65A Botbuttz controllers in case the Ragebridges in any of the bots failed or needed emergency replacement. These are brainwashed Hobbyking brushless ESCs which have been convinced they can only drive brushed DC motors reversibly. With firmware being open-source and developed by members of the robot community, nice things not normally found in cheap single channel ESCs such as exponential response and ultra-narrow deadband are possible. So in other words, this thing is smooth. They also run perfectly on 6S A123s, and were a good amperage match for the 775 motors. 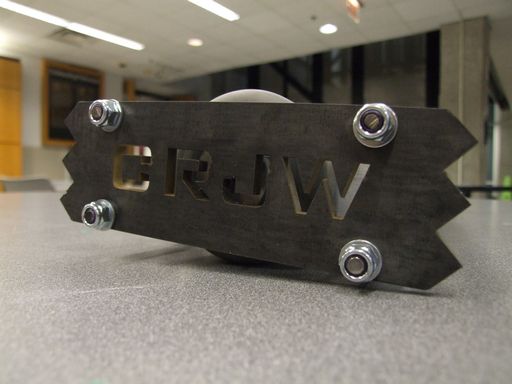 So here’s the side of the thing, with steel knockers. They’re unhardened, so I don’t expect them to stay sharp very long.

This thing basically goes up in 7 hours. I don’t expect it to last very long, but it will probably be a (and only one) hit.