With Null Hypothesis pretty much squared away except for the occasional motor detonation, and no real leads on that regulator problem besides “wait more than 1-2 minutes before turning it back on”, I’m going to start fixing up my current ‘flagbot’ (like flagship, I suppose) Überclocker Remix.

Having been mostly neglected during my focus on building more silly vehicles than silly robots, Clocker has always been on the receiving end of last-week hacks and fixes to address only the issue that came up in the competition previously. In 2010, to fix the problems from 2009, I replaced the shitty 775-type motors with DeWalt drill motors. In 2011, to fix the issue of the DeWalt motors being used with improper torque transmission methods, I just press fitted harder. And in 2012, to fix the problem with the chain falling off now that the motors are relatively reliable, I’m gonna…

Fuck, I need to make actual upgrades to this bot. Changes that should have occured in 2010.

The actual story, though, started a few days ago when I wanted to spar Clocker against Null Hypothesis just to shake down the bot a little more to see what else might have been creeping up on it. Long story short, I couldn’t get the lifting fork to actually lift anything – something, it seems, was slipping before the big gear clutch. Having seen this problem before, I quickly decided it was the tapered gear shaft on the Integrated Dual Frankenb0x – the retaining screw probably loosened or stretched or something. But it was an excuse to open the robot up and examine it completely.

Often times, what you don’t know and can’t see is better off being undiscovered. 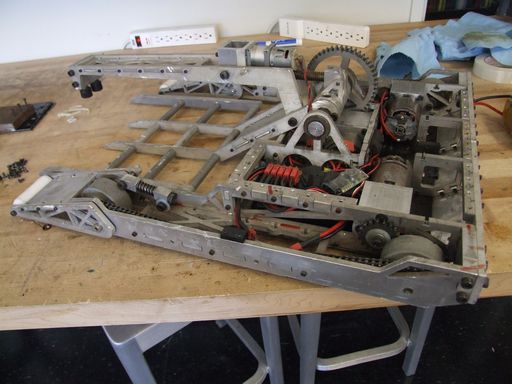 Alright, so here’s the bot. It’s just looking worse and worse too – dirt and grime has settled into all the little metal dings and gashes. Shiny new cuts in aluminum look ballsy and cool, but dirty oxidation does not.

Clocker is a great example of one of my bad habits of designing things very sequentially. In order to take out the lifter gearbox, I have to execute the following sequence of events:

Basically I unbuild the robot to replace a critical component. If I just dive in and go, it takes about 10 minutes to go one way. 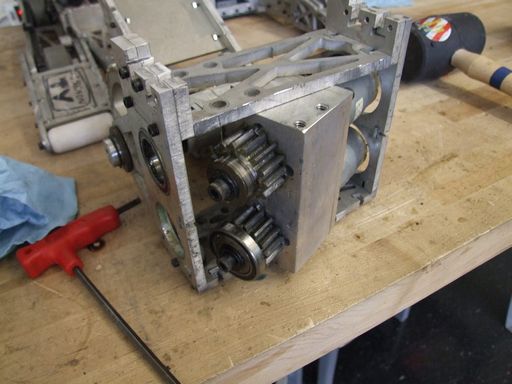 And after all that is said and done, it pops out!

…with one of the bearings permanently fused to it. Hurray? 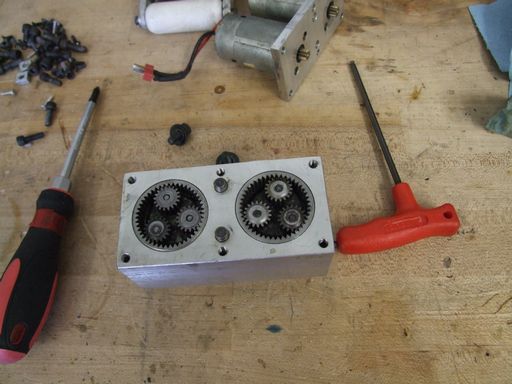 Ah, the IDF, one of my finest machining examples. Combining the parts from what must be like 6 cordless drills, it’s a twin 3-stage 216:1 reduction all made of shitty sintered iron and maybe steel.

When I test ran the motors still attached to the gearbox, something sounded bad. Really, really bad. Time to take those gears out… 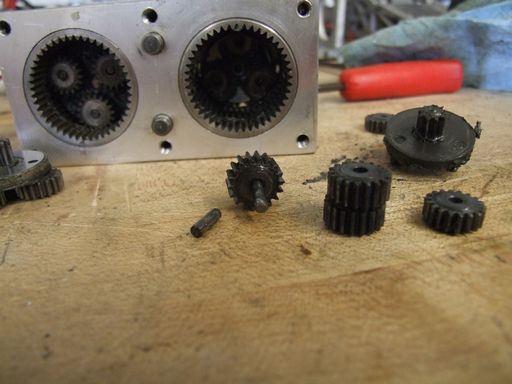 Gearbox 1 is missing all of the pins ever on its output stage. This is a known failure mode of the cheap drills when overtorqued, because the carriers are seemingly made of mild steel and the press fits just explode instantly, causing the pins to fall out. Some times, if the loads are light, wiggly pins are enough when backed by the intermediate stage to not cause much noticeable trouble.

Not good at all. 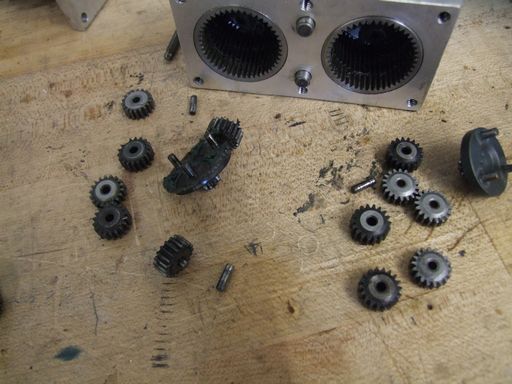 The funny thing is, I bet these gearboxes have been running like this since at least Motorama 2010 when Clocker might have experienced the highest shock loading forces on the fork. I’ve literally never touched this gearbox since when I closed it up in 2009 and now.

I went from possibly having something which was still working now to either a few hours of machining to replace just those shafts (which might just fail once again), or cooking up a new and potentially way more expensive solution.

Time to take apart the gearbox some more. 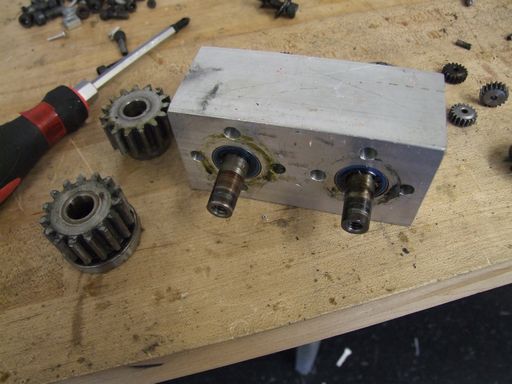 I really liked the tapered shafts for these gears. They take some amount of screw pressure to transmit a ton of torque using the full width of the gear box (unlike, say, a pin or partial keyway), and in the worst case they just let loose and slip. They took a lot of effort to get back off – I had to carefully secure the gears by their teeth in a vise and tap on the shaft with a hard punch and hammer.

After getting the gears off and appraising the condition of the carriers, I spent a little while brainstorming about what to do from here.

Solution 0: Just remachine the damn thing from one of n drill motor shafts I have sitting around. Prone to failing in the same fashion? Yeah, definitely, because cheap drills are cheap drills. It would take less than 30 minutes because taper-cutter.

Solution 1: Machine a tiny Wubba-wubba drive! Prone to failing: Probably not. Probability of me actually getting it right: Ummm….

Solution 2: Overnight myself some Banebots P60s and emergency-redesign the whole system to accommodate them.

Solution 3: Attempt to weld the pins to the carrier plate, just the way they are.

I decided to try solution 3 first, since it involved 1. trying to use our TIG welder because this is a very precise and delicate piece, and 2. The shafts were already broken and could only get broken even more in the name of learning and practicing TIG welding, or fixed. 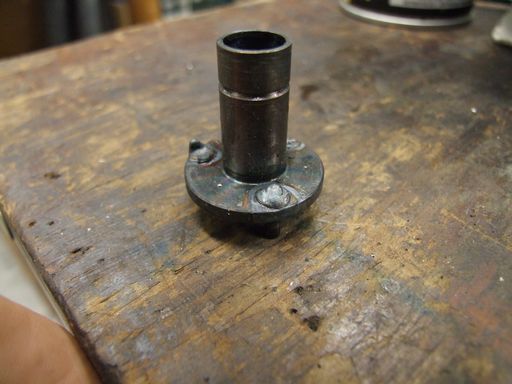 Say hello to the blob.

I’ve only used our cheap Harbor Freight TIG exactly once, and it was to weld the tungsten to the random plate of scrap practice steel 15 minutes after we set it up for the very first time. This was going to be fun!

Since MITERS is used to MIG and very few people (save for Amy) had aptitude with the TIG machine, it was a little neglected. I resorted to using a chunk of mild steel MIG wire as the filler rod, and it definitely took a few tries to not weld the tungsten. But after practicing on some more angle scrap, I began to like it better than MIGing. It’s quiet. Deceivingly quiet – just an eerie blue glow. There’s no disgusting splatter and crackling.

Next, I practiced on a scrapped drill shaft from some project I can’t recall, but it was in my little baggie of drill parts.

Taking Solution 3 can actually have very indeterminate results depending on what kind of steel the Shady Chinese Power Tool Co. Ltd. had lying on its shop floor when the shafts were made. Welding different alloys, especially a very hard high-carbon alloy like the pin (….presumably) to a low carbon soft alloy like the squishy shaft steel will most likely cause cracking in the heat-affected zone. Welding high carbon steel is just terrible in general.

But the pin steel, as tested with some pliers anyway, didn’t seem to be that hard. I’m not exactly surprised – given how shitty the shaft steel is, I wouldn’t expect nice hardened pins. I decided to preheat the whole mysterious assembly to a nice golden brown color (approx. 250 celsius)  based on this site’s recommendation for a medium carbon steel.

The results of my first practice run is shown above. It’s definitely blobby – I didn’t let the puddle form for nearly long enough. I started with a fairly low current of 40 amps, too, so it took a little while to reach even that stage. I might as well have MIG’d it. 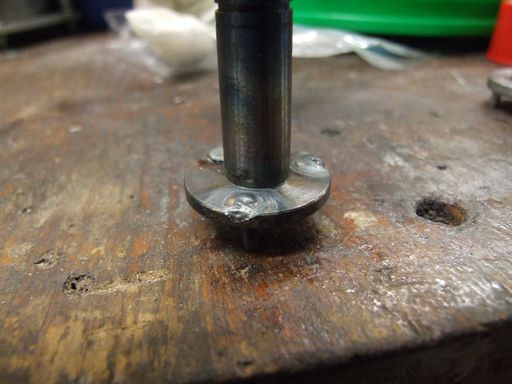 Attempt number 2. I think I’m getting a little better at this. I upped the current to 60A, and it just looked better. The liquifaction starts at the top of the pin (where I aimed the electrode) and propagates to the body. Once the puddle became a few millimeters in diameter, I dipped in a little MIG wire. 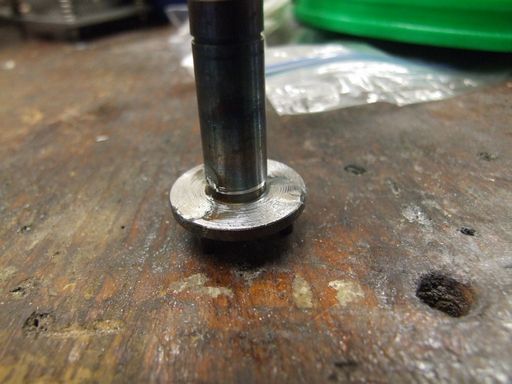 Since the IDF runs with just 1 0.5mm shim of clearance between the carrier and bearing, I decided to machine down this weld to see if I made it reasonably far into the steel. Interesting effect – the pin’s weld puddle is much harder than the surrounding steel. 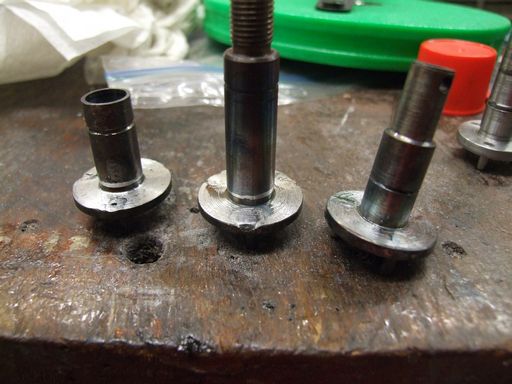 Here’s 3 attempts on 3 scrappy drill shafts, all machined down. The first one on the left clearly shows some porosity and lack of filler, and I’m really starting to like the 3rd on the far right. Overall, I’m liking Option #3 as a potential saviour technique for my drill shafts (as well as preserving them from being damaged in the first place). While it may be metallurgically unsound and may earn me cold stares from certified welders, I’m going to guess that any metallic inteference is better than a slouchy press fit.In the best case, the metals join reasonably strong and I up the failure ceiling a few more ft-lbs and I win. In the worst case, I’ve made a mushroomed metal head on the pin so at least it can’t just slip out backwards, and I…. win? 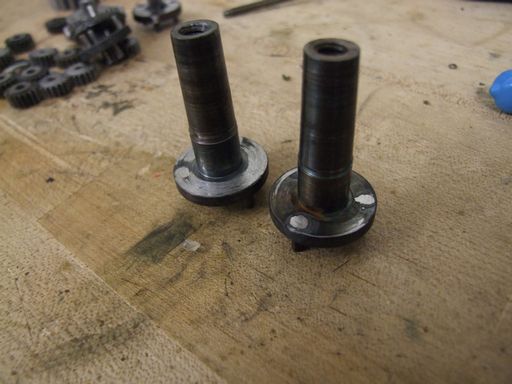 Enough practice – hows about some production parts? These are the two drill shafts after welding and machining. The one on the right I kind of skimped on surfacing a little. 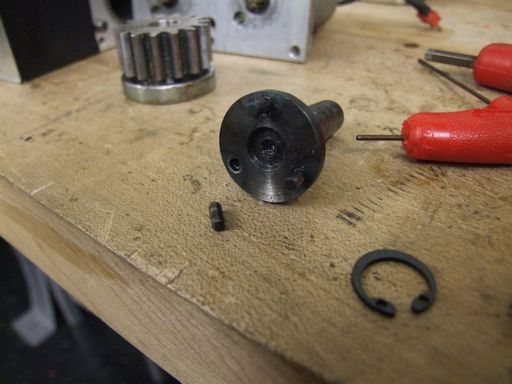 Unfortunately, my joy was short lived. I’m now going to admit a slightly embarassing mistake I made with all of these practice pieces: they were water quenched. Like straight off being red hot and into the sink.

Anything I’ve welded in the past has been gigantic, ugly gorilla welds in mild steel which can’t possibly heat treat in any way, and dunking the parts in water just became second nature to cool them down quickly. Well, with alloy steels and medium to high carbon steels, I think that was a dumb.

The pin there broke off after I put two stages of planetary gearing back into the gearbox and turned it by hand. Sadness.

Alright, it looks like I’m going to have to remachine these shafts anyway. However, before I do so, I will weld the pins in place and then more gently cool them down, possibly even applying a proper tempering process. MITERS does have a tiny oven which has been used by some members to cast aluminum.

So, how’s about them TIG welders?