After a brief detour to Otakon 2012, I’m back and ready to push forth on the everything ever that needs to happen for Dragon*Con 2012 and its associated Robot Battles. There’s actually alot that has been going on lately, but I haven’t been keeping up with the site updates. I’m going to fix that now… but notice how there’s no update on Null Hypothesis yet? That’s because I haven’t started on it. Hmm…

First up is a new chapter in my neverending fairy tale of chasing after the mythical working motor controller, Ragebridge. First addressed in the NH post, but actually designed several weeks ago, Ragebridge is my newest attempt at finally making a reasonably reliable small H-bridge controller for robots or certain DC powered vehicles. My first (and only) successful H-bridge was one hell of a start – it was a 60V, 100-200A (the amperage never having been truly pushed) unit for LOLrioKart. I have not produced a single working H-bridge since, and I really can’t say I understand why even after this board.

The last update concluded with myroPCB taking eons to process my order. I’m glad to report that since then, I’ve gotten the boards! 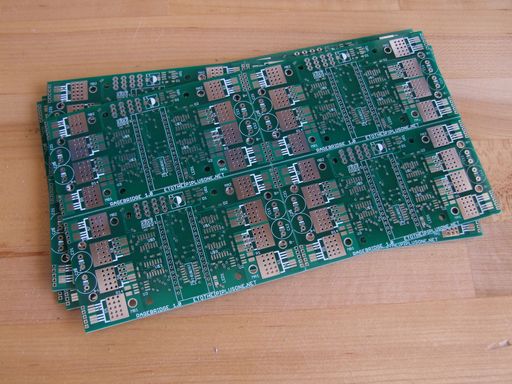 …all 4 panels of them. Wait, I only orderd one panel of 4 boards, and now I have 16 boards. Is Myro’s excuse for fucking up your order in-production (their excuse when I called them to inquire, 2 weeks past the 1 week leadtime guarantee) to just send you an asston of boards so you’re happy?

Well, I’m sure as well happy. Who can stay mad when there’s more boards?

Now, these things had better work… If they do, I really might consider releasing some of these to other robot builders to test, because 16 boards is alot of door decoration. 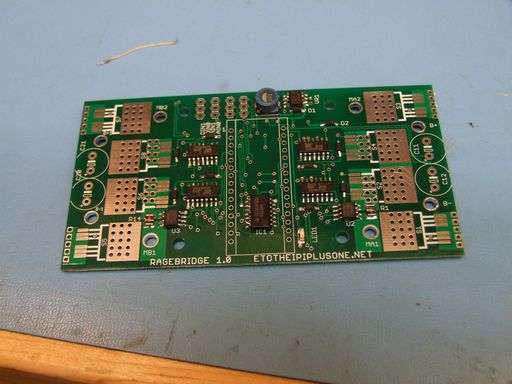 I begin the board population by placing all of the ICs and flat stuff.  The FETs and capacitors, since they stick up pretty far, will go on last. On this board, I placed almost all of the passive components (the Rs and Cs, and some other things) on the bottom side. Diodes, such as the zeners for the FET gates, are all on the top side, since they’re semiconductors.

If I were actually to try and get this board made by an assembly house (or maybe I’ll just sell it to Hobbyking), I’d try my darndest to put all of the components on one side. Double sided boards are more challenging and expensive to populate because they involve flipping the board. So if the design proves reliable, I might make some more layout permutations and possibly even form factors/sizes. 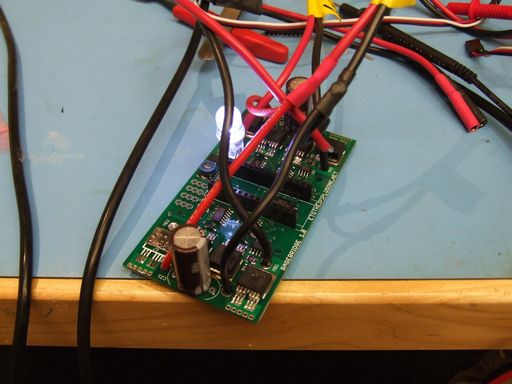 I tend to test my boards in stages – getting the logic power working is one such stage. Here’s some verification that my 15V gate drive and pre-logic rail is indeed working – it’s lighting a 12V LED incandenscent-replacement.

Incidentally, this step took a little while to finish. I accidentally replaced a logic bypass capacitor with a 0 ohm jumper resistor. That explained why the regulator was only outputting 50 millivolts and becoming very unhappy. It took me a while of searching for accidental net overlaps in Eagle and solder bridges before I thought that the number of resistors did not quite match up with the board design.

After that minor issue was fixed, the logic power began working fine. 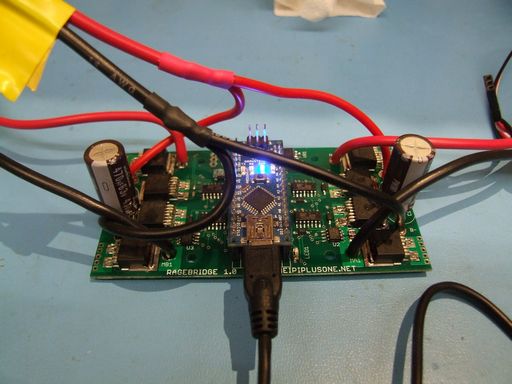 Now with more Arduino. I first wrote a “dumb” PWM testing program to make sure the outputs were all working. This just entailed putting a 50/50 PWM on each side, alternating between forward and backward every 5 seconds to test if the gate drive and PWM AND’ing circuit worked. During this process, I discovered that one FET was dead – which was unsurprising, since it was salvaged from another controller.

The FETs I used on this thing are some 3.4 mohm units from Infineon. I’m generally a die-hard IRF fan, but their shit is getting too expensive for me to keep blowing up ($6-7 each, and I went through a whole rail of 25 for the Tinytrollers and LBS boards…) and these D2PAK-7 FETs were only $2.18 each in reasonable quantity… And it’s not like I’ve had a controller fail from overheating yet. 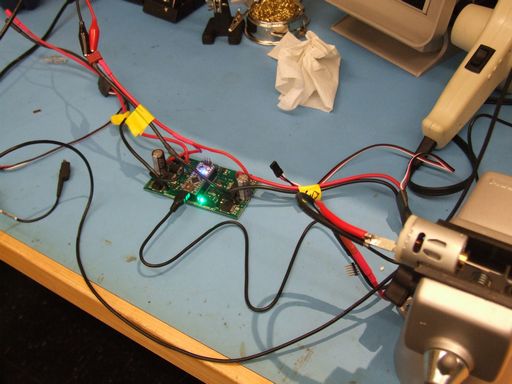 Since my outputs were all valid, I decided to throw a small test motor on it. This small 24v random motor worked fine, even on a bench power supply with hard stepped reversing.

Mostly because it stores too little energy to actually do damage. I next tried this exercise with a classic robot motor, the EV Warrior. Hey, I figured if it can hard-punt an EV Warrior on 24 volts (by this time, I was running 75% duty cycle on a 30 volt power supply), it could survive anything. Except it was still on a power supply. Power supplies, generally, do not “sink” current very well – if there is an attempt to reverse current flow, they either tend to crowbar (protection circuitry) or the voltage on the output will surge uncontrollably as the reverse current charges the output capacitors. In my case, I briefly saw the supply flash to over 60 volts before it shut off its own outputs.

I was left with an entirely dead side  – the spike itself was likely much higher than 60 volts. After appraising how much of a dipshit I was for trying that stunt, I replaced the dead IRS21844 chips (and 1 blown FET) and all was good again. 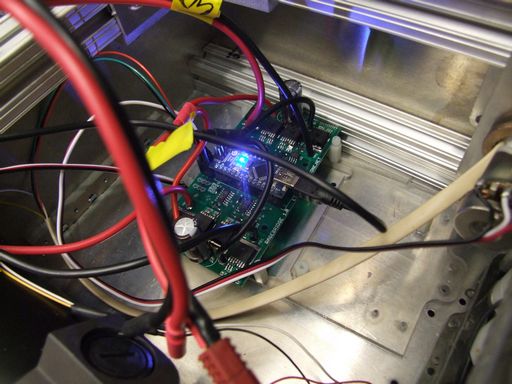 The original application for Ragebridge is to drive the Silly Media Lab Vehicle project I’m working on this summer (like… just about every summer, now that I think about it). Now, while I like documenting and publicizing things I do, this isn’t really my project to do so with. So here’s a picture from a little later when the test board has been installed into the vehicle. The drive motors are some 500W wheelchair motors which are rated to 100A stall, so they should be a pretty healthy load for this board.

Ragebridge’s first test was a little inconclusive. I began running into the same regulator latchup problems as Tinytroller – the LM2594 circuit would, seemingly randomly (but vaguely correlated with surge loads) enter a state where it outputs approximately 6-7 volts and makes an audible buzz. The situation is only resolved with a power cycle. These things are supposed to switch at 150kHz, so if I hear it, something’s gone terrbly wrong.

I spent a while trying to figure out what might be causing it, going through my usual motor controller differential diagnosis processs like…

I never got to that last one. Since Tinytroller exhibited the same kind of regulator latchup, and seemingly nobody else in the world has ever seen this problem happen, I decided it must be some kind of systemic terrible layout fuckup that must be obvious. I submitted the design files for Ragebridge to He Who Has Actually Reliable Motor Controllers and Stuff, and the verdict we agreed upon was that nothing substantial was wrong with the design, except this weird arrangement of capacitors:

This is where I need to explain how the IRS21844 gate drive chip works. It has two different grounds, one for logic and one for power. Hypothetically, they are allowed to float 5 volts apart, providing some semblance of isolation between logic and power. It’s not as pure as fully optocoupled logic in terms of noise robustness, but they sell these things to people so they must work, right?

Anyways, the pin on the chip that is supposed to be logic ground is called VSS. I generally call my boards’ power-side return (/battery negative) VSS also. The actual pin on the 21844 which is supposed to be on the power ground side is called COM, and the datasheet recommends a ceramic bypass capacitor between VCC and COM to accommodate the pulsed gate drive current, which can reach about 1.5A for a few dozen nanoseconds (read: super-fast dI/dt). If you’re lost, don’t worry – clearly so was I.

I’ve generally copied and pasted my gate drive & power schematics from one controller to another. Looking back, this particular nugget of the schematic was taken from Tinytroller. After Melontroller 2’s success, I decided to start totally over with the layout. This is where the mistake occurred: Instead of routing the “low side” bypass cap from VCC to COM, I bridged it between VCC and logic ground, the chip’s “VSS” or my “AGND”.

So basically what this means is, first, the low side had no bypass capacitance at all. Looking at the Ragebridge original design picture, gate drive return current has a hell of a long way to go before it can reach the regulator’s return, all through narrow traces with lots of corners and vias.With pulses of 1.5A needing to evacuate in matters of nanoseconds, I’m not exactly surprised that substantial voltage transients could have been induced in the ground traces. The job of bypass capacitance is to absorb these rapid voltage transients very close to their source (the drive chip) so they do not propagate to the rest of the board.

Second, should the local 15V gate drive supply become unstable because of the pulsed current draw, its effects are capacitatively coupled into my logic ground. Again, while possibly small, it can’t be that good. 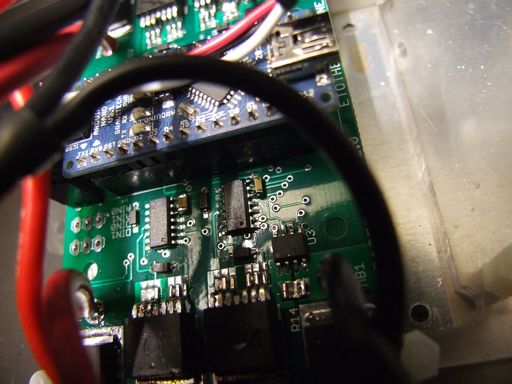 I had to execute a little bit of ninja soldering using the finest SMT tip I could locate in order to fix the (not even certain) problem. The caps were removed from their pads on the underside and then carefully jumped across the requisite 21844 pins (VCC and COM) on the top side.

And it worked. I’m guessing moving the errant cap to the correct side of the divide made the VSS-COM distinction actually useful, because this seems to have cured all of the ills that was plaguing the regulator.

While I can’t really post video of the SMLV working, I have yet to get Ragebridge to reset a single time after this change was made, even under rapid forward-backward direction switching. The maximum batttery-side current (measured with a Wattmeter) was 76A, though this was surely very brief. But it proves that Ragebridge can at least handle those kinds of surges. The 3.4mohm FETs used on this board should be good for at least 40A continuous duty. The components on the board are selectable for a wide range of voltages – the board I put together above can probably run 36V robot systems without problems, with 60+ volt rated major power devices.

I’m confident enough now in this design that I want to pitch it on a robot. Even as powerful as the SMLV motors were, they were fighting against alot of inertia (literally, my morbidly obese ass) and generally moving very slowly. I can’t just whip the whole thing back and forth on a timescale of milliseconds. A robot motor, such as the venerable 18V DeWalt motors, have much less inertia and can change directions (and currents) very quickly. This test would be to see how well the Ragebridge design stands up to these higher, faster transients. If they prove to be no problem after the changes were made, then I will rage-quit everything because god that was so obvious of a fuckup.

Too bad I took apart my only generic 30lb drive base last month. Fortunately, I’m building another one soon. Overall, I’m glad that to fix at least 90% of the problem, no traces and wire jumps were needed because that would have seriously made these boards unattractive for use.

3 thoughts on “Ragebridge: It Needs More RAGE (and Testing)”