I mentioned last time during the Great Project Purge that RazEr rEVolution was due for a rebuild very soon. I don’t actually plan on calling it RazEr Repackaged, but that’s pretty much what’s going on here. Like the rebuild of Kitmotter, it’s intended as a literal repackaging of parts I already have – a case mod, I suppose. The goals of this rebuild would be to update the frame to a new construction style that I’m favoring more, as well as to clean up some other design loose ends like adding a brake (mixed-up priorities, anyone?) and building in support for the Jasontroller. 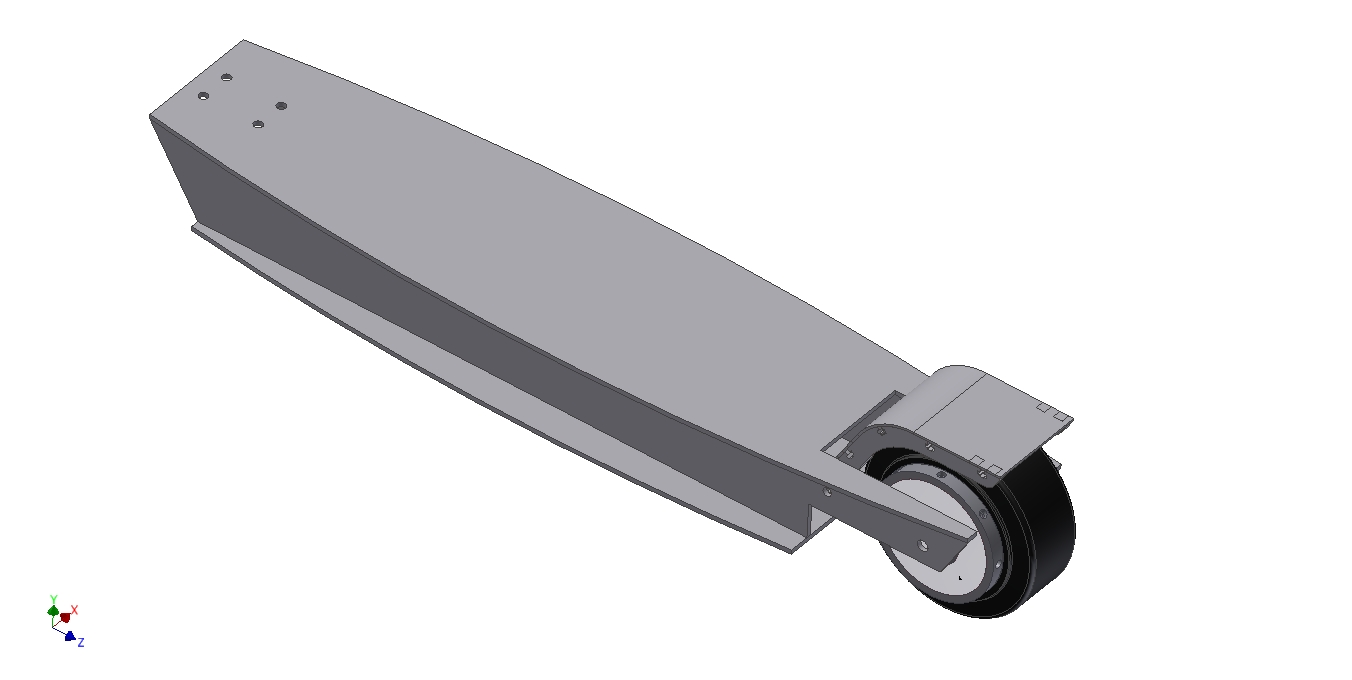 The new frame is of roughly the same dimension as RazEr Rev(1?), but it is no longer made of 1/4″ plate for the sidewalls with exposed T-nuts. Instead, the whole structure is 1/8″ aluminum now. Not only does it save weight by reducing unnecessary material use in the side walls, but it opens up the interior volume a little more. The “cavity” for controller and battery is also about half an inch longer. The 1/8″ plates will be attached together with corner blocks similar to those I used in NK.

Additionally, there’s no more structural vs. nonstructural top plate. The black Garolite deck of Revolution is gone in favor of a single top plate and the silvery metal look (changeable with selective application of grip tape or paint). 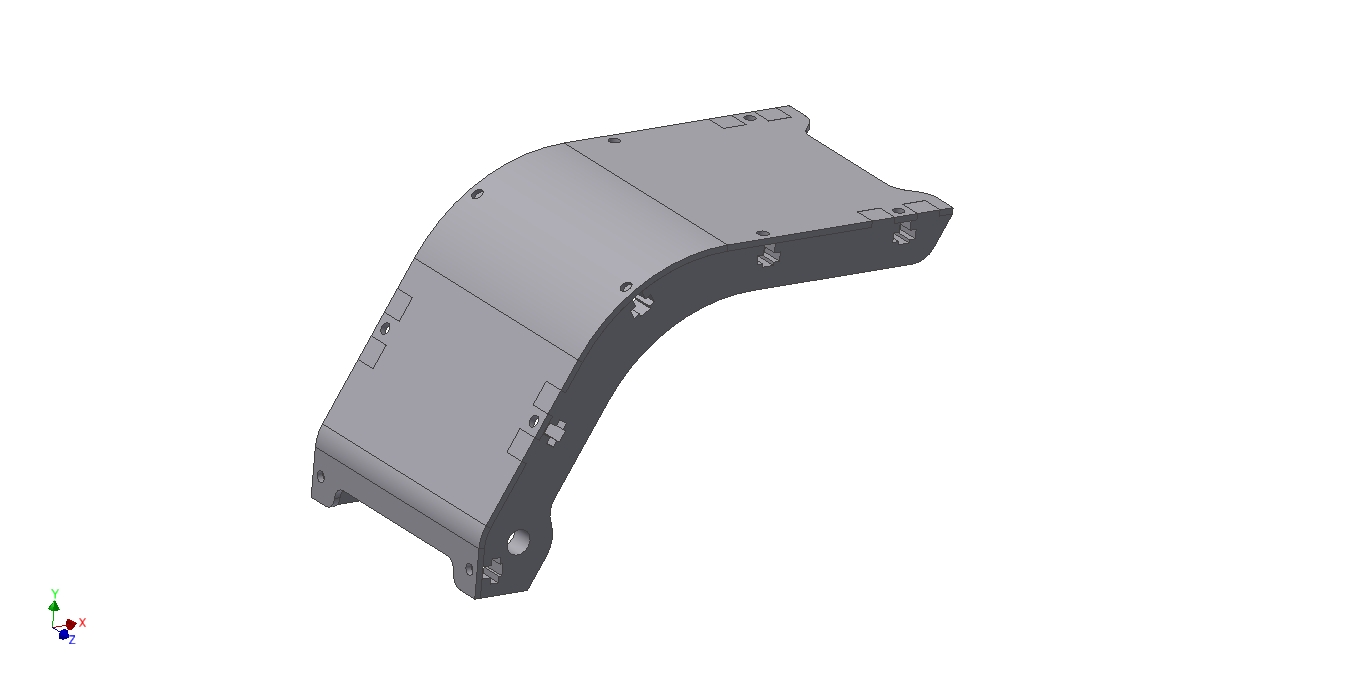 The first subassembly I put details in is the thing that RazEr Rev never had: a fender brake. By that, I mean it neither had a rear fender (until I appended one crudely) nor a mechanical brake. This being the revision that I hope to address shortcomings, it’s going to get a brake.

I finally spent some time to figure out the way that Inventor processes sheet metal geometries so I could make properly mating sheet metal parts. The side of the sheet metal that you make features on really matters, as does the role of sketched bend lines (start-of-bend, centroid of bend, etc.). Yes, I’ve used Inventor for like 7 years without really touching sheet metal features in depth.

Not shown in the above image (but in the one below) is the spring for the fender – it uses a simple bending plate of spring steel instead of a torsion spring due to the limited space under the fender. 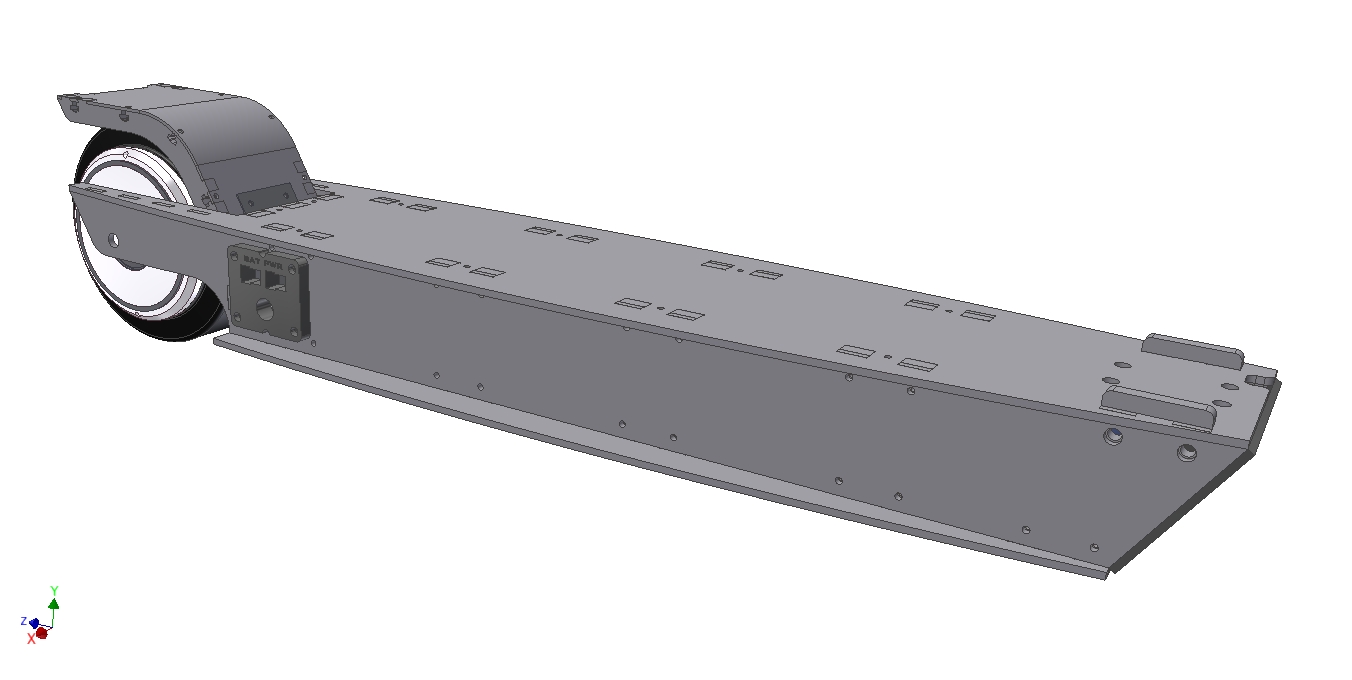 There’s other trimmings to be added too. Instead of a Deans shaped hole in the side plate, I’ve just opened up a big rectangle and will be using 3d-printed electrical panels. Right now, the configuration is for two Deans and a switch. One connector is a battery connection and the other goes to the controller – this way I can easily jack in a Wattmeter or similar. Should I decide to change wiring arrangements, the electrical panel is reprintable. 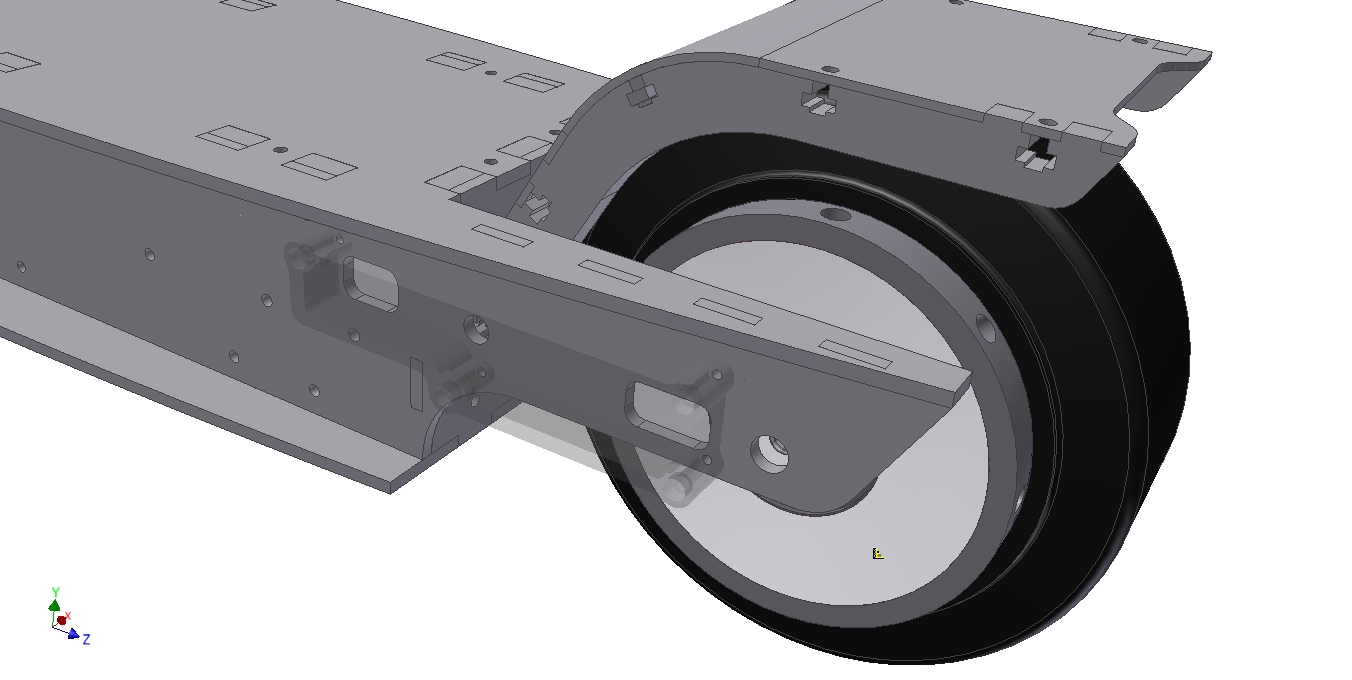 The motor wiring will be hidden behind a 3d printed cover. While not Apple-like, this at least cleans up the exterior wiring of the vehicle substantially. I’ve been entertaining the idea of a “kit-class” scooter based off RREV for a while, so maybe this rework will move towards that a little more. 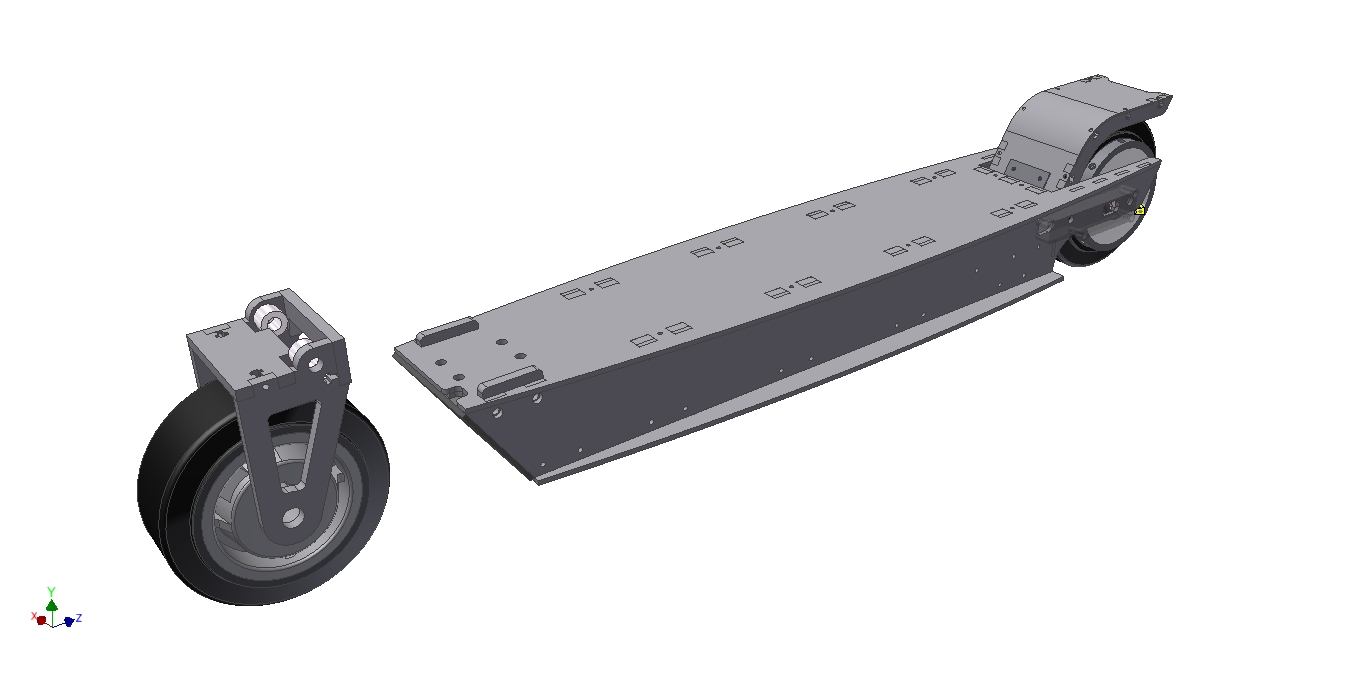 The front fork remains the same from the old frame, since it is a solid design. Here’s the front posed roughly where it should be. One of these days, I sweeeeaaaar I’ll model up a handlebar from a Razor scooter. 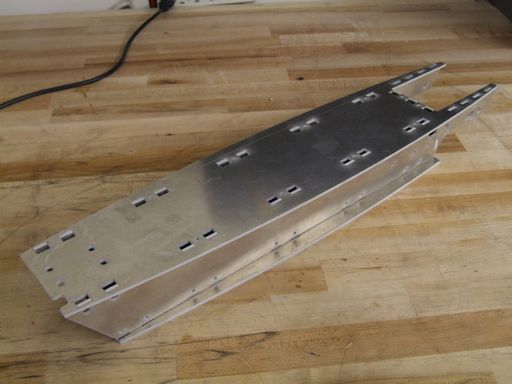 I cut the frame out of 1/8″ 5052 aluminum. One of the main reasons for moving to all 1/8″ on the frame was the fact that I could get the sheets for much less – they tend to show up more on the surplus channel for one reason or another, 5052 even more so. 5052 is about 2/3rds as strong as 6061-T6, but the vertical height of the material is still more than sufficient to carry the loads I need. 1/4″ 6061 just didn’t make sense any more in the side plates. 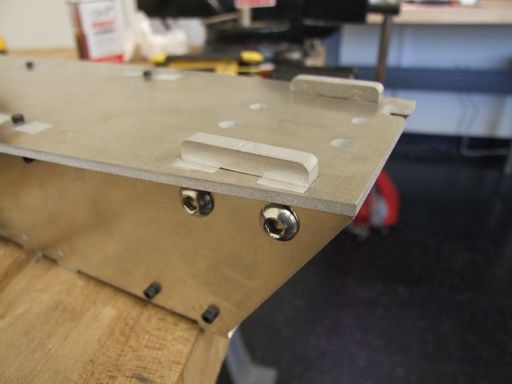 This time around, the attachment for the front folding joint is done through a “clip” which makes a material-to-material interface. This opens up space underneath the folding joint which would normally be taken up by a giant nutplate, but this time I can scoot the batteries forward under it. The method is decidedly less stiff, so a “backup plate” of another 1/8″ thickness is also clamped underneath. 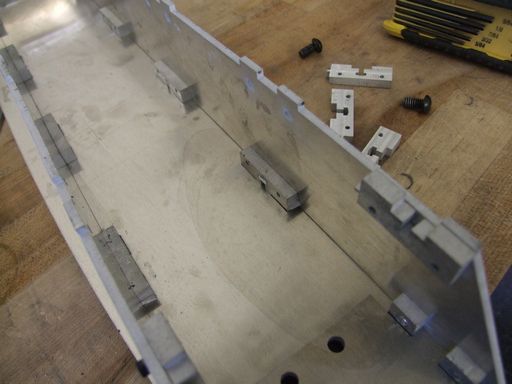 1/8″ is too narrow to hold T-nuts directly, so I’m using some 1/4″ to make corner blocks.  I probably didn’t need to use this many either, but it was an easy linear pattern to make. The backup plate is seen at the lower right. 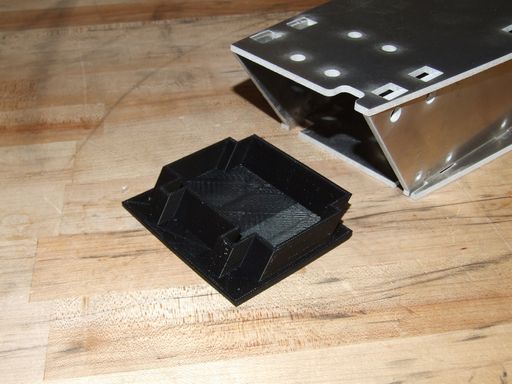 Another Classy Thing I’m putting on this version is a 3d-printed “endcap”, similar to the ones found on stock Razor scooters. For this version, I just used the theoretical outline of the corner blocks and internal plates, which means it doesn’t actually fit if the frame is fully tightened and assembled since these dimensions are compressed a little. It’s not supposed to be waterproof; just a splash guard.

Once the frame is done, I should be able to throw it all back together in a day.