I got absolutely fed up with the toolpost on the MITERS lathe tonight when it, despite my best attempts to prevent it, loosened on a cut in some steel pipe (for Pop Quiz’s motor can) and chipped the head off one of the new carbide-tipped bits.

So I spent the next 8 hours after that designing and building a new toolpost to replace the 80-year-old-steel-on-a-stick business current on there – it’s called a “lantern” toolpost, and is just about the biggest pain in the ass ever contrived by man.

After browsing through some designs for DIY toolposts, I settled on a simple one-tool, height-and-angle adjustable design. I decided to not go totally balls-out and try to make a real quick-change one. Rather, I just wanted something that didn’t have 96,105 degrees of freedom, and was alot stiffer. With the amount of time I spend messing around at MITERS, it was worth the effort, but not too much. We also have no dovetail cutters. 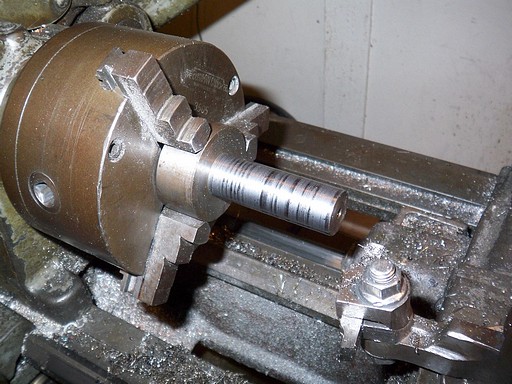 The first step was to make a post. Luckily, a strange plumb-bob-like thing made of steel, with a 2″ body and a 1″ stem, was hanging around in the metal bin, saving me from having to turn an entire 2″ steel round down to 1″. Some quick passes to cut off the threads on the stem and I was in business. 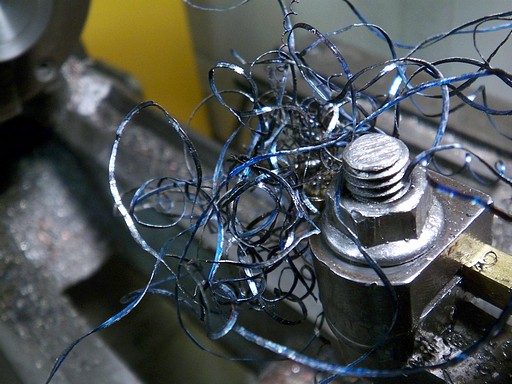 Here’s a great picture of blue steel curls. This is probably bad, but ignorance is bliss and so are cool colored chips. 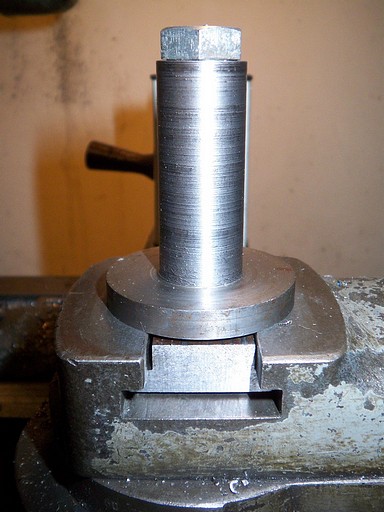 But now you can laugh at the amazingly shitty finish on the post. Also notice the T-nut machined from some handy steel bar, and the 1/2″ bolt that holds everything together.

After this picture, I put the post back onto the lathe and smoothed it down with some sandpaper. The OD on the post is one inch. 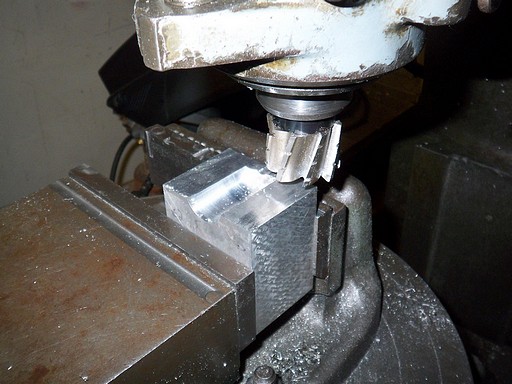 Next was the tool holder itself. I found a giant aluminum billet which someone apparently tried to bore through and stopped midway, and cut a chunk off on the bandsaw.

I finally got to play with the big shell mill. Quite a change from the little endmills, as it was consuming aluminum at quarter-inch depth & full width as fast as I could crank the handle. It also left a brilliantly smooth finish. 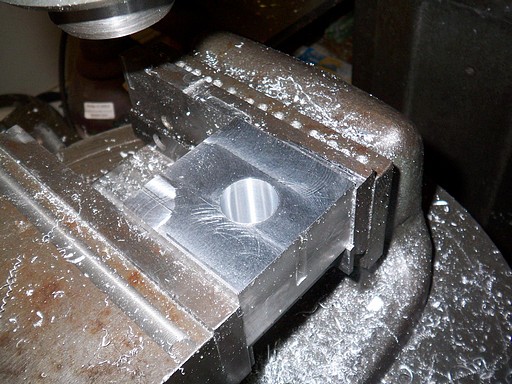 In another episode of new tooling experimentation, I decided to try out the boring head to make sure the holder fits snugly over the post. This 1.01″ hole goes all the way through, enabling the holder to pivot on the post and be clamped down anywhere needed. 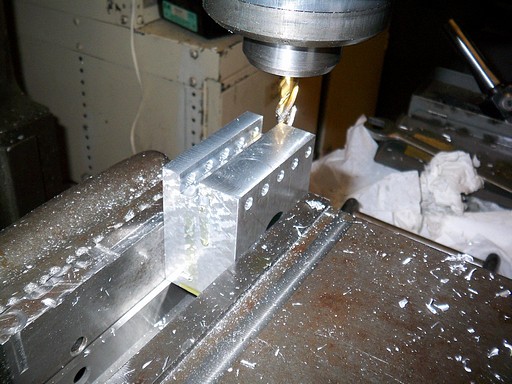 I decided to accomodate up to a 3/8″ bit for now. The slot was positioned such that the top surface of a 3/8″ square bit would be aligned with the rotational axis of the chuck. Since we mostly have 5/16″ and 1/4″ square bits, it means the tool should never “bottom out” in normal use.

Five set screw holes will eventually hold some big cap screws to lock down the tool bit. For some reason, I drilled them all the way through when halfway would have been enough. Does not affect anything. 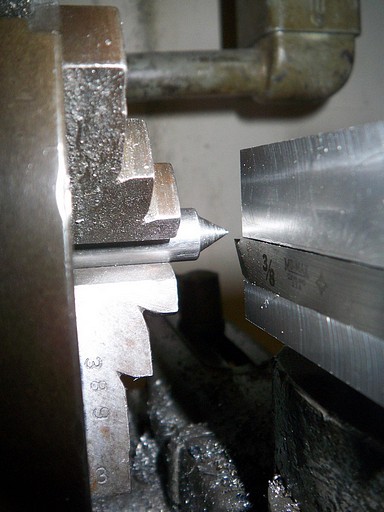 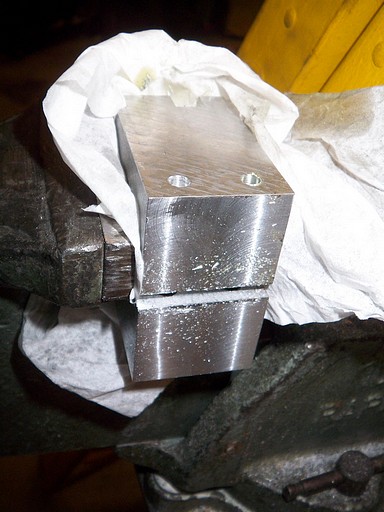 Here, the “slit of clamping” and clamp screw holes have been machined. The top half is threaded, the bottom half is a loose clearance, both for 1/4-20 cap screws. I could have used a single large screw, but couldn’t dig up a 5/16″ or 3/8″ cap screw of the needed length. All threaded holes are 1/4-20. 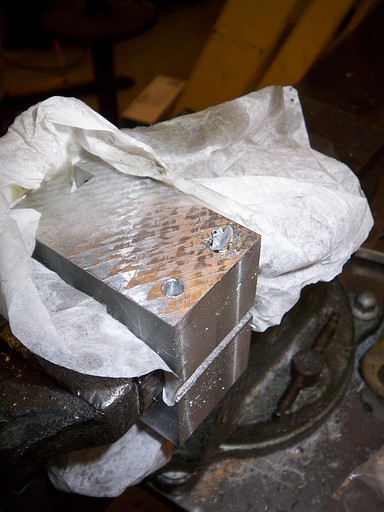 The robot gods had to intervene somewhere, of course, and it was on the very last hole tapped for the night. There wasn’t enough to wrench it back out, so I ground the broken tip down flush. One clamp screw *should* be enough. There is space between the two screws to add a third if necessary. 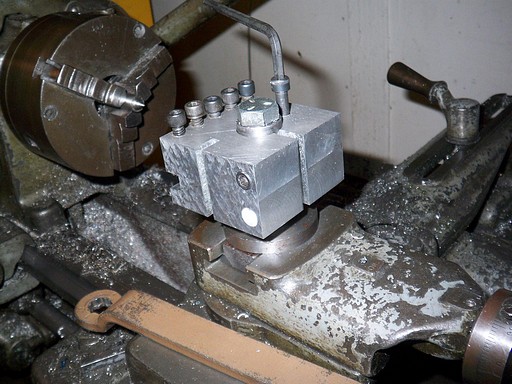 Here’s the height adjustment in action. Another cap screw threads vertically through the holder and pushes against the post, allowing precise levelling of the bit. Once that’s set, the clamp screws are tightened down and the whole thing locks up solid.

It allows clean height and rotational angle adjustment, plus the ability to “hold” settings between tool changes. One twist doesn’t affect the entire setup, unlike the lantern post.

The bottom of the holder can be raised up to 1/2″ off the post. If it is up this high during operation, something has gone wrong. With a 1/4″ bit, it should be around 1/8″ up in order to cut on the centerline. Adjustable to taste, material, feed rate, bit style, etc… 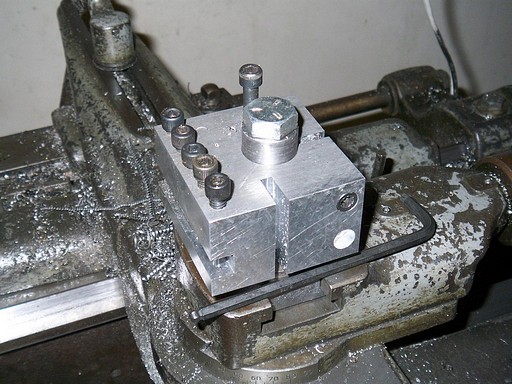 The finished product. It really should be steel too, but I couldn’t find a big ingot of steel lying around. Big aluminum works also.

Notice the slot cut at a right angle to the original clamping slot. This was done after I realized that about .75″ worth of aluminum was not going to give way to a single screw’s clamping pressure. So I had to weaken my own part on purpose with the slot to enable the clamping to be more effective. The tool holder tightened down easily on the post after this quick mod.

Time for a test run, in a steel round. This was a really ballsy cut – .03″ depth, but at a somewhat slow power feed (196 TPI?). About half this depth was the “danger zone” for the lantern post. I wanted to take it further than I would normally do so just to see what would happen. It took the cut fine. By the way, the sudden shake near the end was when one of those flaming hot steel curls hit me in the nose.

So what’s next? Hmm, now that I have a grasp at how this works, maybe it’s time for a cutoff tool holder. I’m seriously getting fed up with wielding a hacksaw on my pretty finished parts, too.