I did something bad.

About a month and some ago, I made an account on mfg.com out of late night curiosity into the world of sourcing fabricated parts out to random people you have never met or talked to beforehand. For a while now, at least a year, I’ve occasionally gotten suggestions from people around the MITs to try putting some of my parts on there to be made in volume, or at least in quantities above what I cared making by myself. From those impressions, I figured mfg.com was like some kind of dating website for factory foremen, shop heads, and engineers. I now think that assessment is pretty spot on. It really is like a dating website. You make a profile and create a Request for Quotation, which filled out like one of those personal quiz things that abound on the Internet, except about your part…..as in, the part you want fabricated: what materials, processes, distance from you, and oh yeah include a picture and/or 3d model. The RFQ remains open for quote for a time period you determine, and you also set things like anticipated delivery date and payment and logistics terms (such as “T/T Ex Works”, which I took to mean “Paypal only, and Fedex it or something”).

But musing about the website is besides the point. I elected to at least try the system out, and spent a few minutes thinking about what part I found really bitchy to make that either took a long time or required precision operations, or both. The answer I arrived upon in my early morning stupor was motor cans. Specifically, I uploaded a CAD file of the skatemotor can, and to avoid the potentially really expensive one-off sample pricing, I said I wanted 10; they were to be made of whatever steel you found on the floor (though I specificied low carbon such as 1012-1018 or equivalent), I am the end user of the parts and do not really expect to need more of them (answers to such questions as “Anticipated Usage Per Year”) and I whipped up a basic 3-view drawing with labeled tolerances and finish requirements. Then I closed the window and let the magic happen.

The problem is it did.

I received in the neighborhood of 20 quotes, since I opened the floor up to all and besides the host of shady Chinese backwater shops (all privately messaging you information about how shady and backwater they are and linking you to their own websites, just like a dating website but with engineers), there were also plenty of local American houses and even a Croatian one. From my experience in mechanical engineering and machining & fab, the U.S. quotes were essentially what I had guessed they would be (mfg.com lets you set a target price, which is not visible to the bidder). In other words, I can’t afford it – sure as I am that “graduate student” is not the most highly paid of engineering positions, I’m neither a company nor have seed funding nor a rich uncle. And so American manufacturing slips yet another small delta: I elected to concentrate on Chinese quotes, which fell into three very distinct bands: they ranged from not much less than local Yankee-made parts, to reasonable considering the RMB to USD exchange rate and material costs, to… seriously, are you kidding me?

At the close of the quoting round, I was totally ready to ditch a nontrivial (for me) amount of money to see if getting my 10 cans machined at the seriously? rate was even a legitimate physical phenomenon. I was both intensely curious at how inexpensively outsourced parts could be, as well as a little scared at the realization that maybe the complacent U.S. manufacturing industry was deservedly upset about Chinese manufacturing. 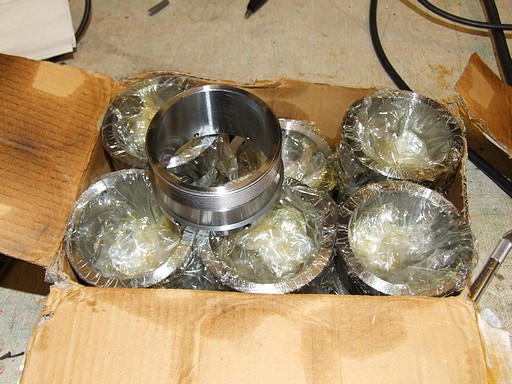 It’s a real thing. I actually got updates as the parts were finished in rounds, and received an inspection report for 5 of them along with the order. A little cross checking with calipers found that at least one of them is closer to my specifications than I ever cared to hold.

They’re steel. Q235 type steel was the selection, material to be provided by supplier. Q235 is a Chinese standard roughly equivalent to type 1012 low carbon steel, so it was what I would have used anyway.

They’re shiny. Definitely a separate lathe and 4th axis/rotary indexing job, since I could see the faintest of grip marks on the inside of the very well finished cans – a 4-axis combo machine would have been able to do this in one setup. I designed this generation of motor to be made on such combo machines if it came to be the case.

I actually got 12 of them – either 2 somewhere did not meet the inspection standard or they decided that just making 2 more to fill the damn box correctly was worth it, but hey, free cans. For the total price quoted, I was really not going to be disappointed if I got a chunk of cast scrap iron that was vaguely motor can shaped. My expectations have been well-exceeded.

The problem that I now must confront is, what now? I have 12 motor cans and no end plates, stators, shafts, and only one set of magnets to match. 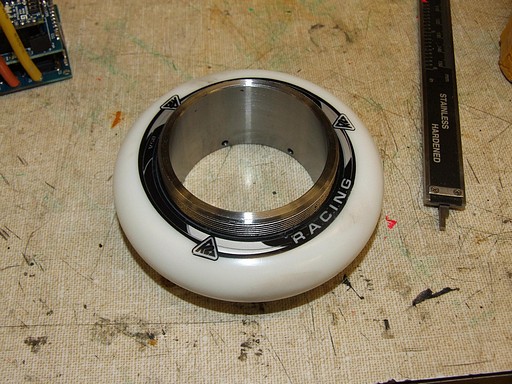 While having metal shaped to my liking is nice, there are other very hard to find and/or bitchy parts involved in making one of these motors that I am actually curious about bypassing through the magic of sourcing.

1. Wheels. I’ve had to machine out wheels to fit over the rotors, and if I can get a “ring of polyurethane” kind of part molded, then that makes everything much better and more convenient.

2. The stator. Wound. Finished. Maybe not pre-terminated and with pigtail cables, but winding the motor takes forever. I know this is the kind of work that gets farmed out to marginally-paid migrant workers in Southern China somewhere, but if I can get wound stators for a reasonable price, that is actually the make-or-break for me regarding whether or not I will pursue this as a serious endeavour.

2a. Raw stators. Having a dependable source of stators that isn’t “this random-ass laser printer I pulled off the loading dock” is a start.

8 thoughts on “Hub Motors on Everything, Part IV: Crap, Now I Really Mean Everything”