It hasn’t blown up yet!

I spent most of today finishing the driving code that I half-started on Sunday night. Because the new board mounts do not have the microswitch to detect the rider, I was left with only the radio failsafe as a way to kill power. Before, an invalid radio command (or the total absence thereof) did not open the contactor, but that was changed to buffer that line of defense against runaway miniature tracked vehicles. Next, in a fit of i-hate-software-induced rage, I coded an asymmetric ramping function which took a master throttle command from 2000us to 1000us, with 1500us as ‘neutral’, and ramped it at adjustable rates to adjustable endpoints. The ramping was set up such that increasing throttle and increasing braking (both on the trigger channel of the transmitter) was ramped, but decreasing throttle or braking force was passed straight through.

LBS is practically impossible to ride without some kind of ramping or other controls damping, so I decided having this more complicated but tunable code would come in handy during ride testing. As an added bonus, the code is very modular – I could splice in the master radio command with the average displacement of the rider’s center of gravity after the load sensors are installed. 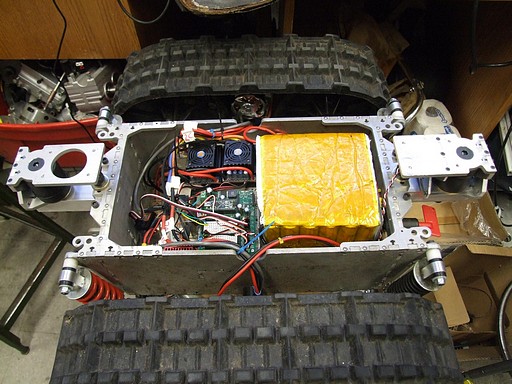 So this is what the whole thing looks like after finalizing the wiring with zip ties. 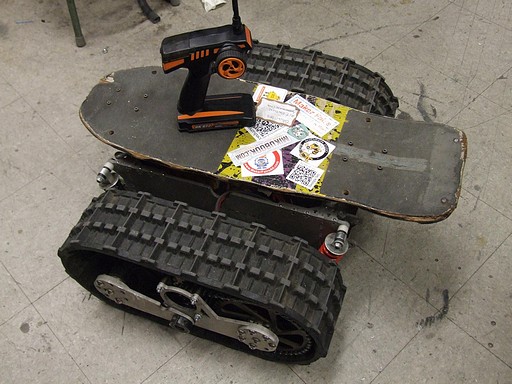 And with the board remounted. It doesn’t really look that different from the previous version, but it has more stickers!

Ride testing revealed that even upgrading to the 70A rubber bushings was not enough: the board is still too soft. They seemed to “loosen up” with repeated bending, too. Even worse, it’s very underdamped: Because there is no friction element in the joint (only the bouncy rubber bushing), it’s easy to trap yourself into an oscillation of full left and right tilt, resulting in a very quick destabilization as the tracks pulled left or right. This behavior was termed “latching” after the unstable behavior exhibited by malfunctioning amplifiers. Part of the fix is adding some rubber washers or other friction-adding element to the joint, but I do need stiffer bushings. Space is the most constraining issue here, since the mount was designed around the 2″ long, 2″ diameter rubber bushing mounts. I’ve thought about casting my own ~80A polyurethane ones, or making an extension of the joint which actuates gas springs.

I also discovered that ramping the braking force contributed to alot of “laggy” control feel – after turning up the gain repeatedly, the best results were obtained once I just pegged the ramp to full – that is, following the braking command both in and out as quickly as possible.

Otherwise, the optimized behavior of the HK cartrollers to R/C car racing (and not, say, rideable vehicle propulsion) showed through – starting in a sharp turn wouldn’t result in one side’s track braking, since by default the controller is designed to coast after it has detected zero motor speed. Only a small amount of forward throttle coupled with the turn would actually result in stopping one side. This is not something which is addressable in the controller’s calibration settings. Turning on smooth surfaces is still a little unstable, since these controllers are not actually “speed controllers” so much as just open loop voltage drivers. True speed control (even synchronous rectification) would guarantee a yaw rate because the tracks will be forced to travel a certain speed, and the faster cannot drag the slower to a higher speed. This is something which will be addressed in the near future.

At least they haven’t exploded yet – after all the testing, the cartrollers were reasonably warm, and the SK motors burning hot. It was all on flat ground, however – going up the wheelchair ramps here would probably make the cartrollers unhappy. The first burnout was most likely due to very high current spikes because the sensors were totally off. I would trust the 150A version of the cartrollers much more in this application.

What’s more important is that I get this thing on a more slippery surface and run it around before determining that all of these are shortcomings. After all, real ATVs and tanks aren’t tested in parking lots; they’re tested in rough terrain. The brushed drive worked just fine in the grass at Maker Faire, but was almost impossible to handle on-road.

Enough rambling. I know what the Intertubes wants to see:

3 thoughts on “Land-bear-shark: Now With More Tilty-sense Board (than it should have)”