I forgot which update I’m on again, so pick a value of n and k of your liking which evaluates to the previous update + 1.

Finally got a chance to actually work on the wheelmotor… the days so far have been absorbed by the abrasive waterjet cutter at the Media Lab, among other things. I should be able to get some more work done soon.

Remember the aluminum biscuits I got a while back? Shouldn’t have gotten them supersize. The side plates are .393″ thick at the maximum and I got .75″ slices of aluminum. This meant I had to turn down almost half the length of each disc, which was sketchy enough considering the lathe’s limited spindle speed and feed options.Â  Worse, I still haven’t figured out how to activate the power feed for the cross slide, so it was hand cranking all the way… 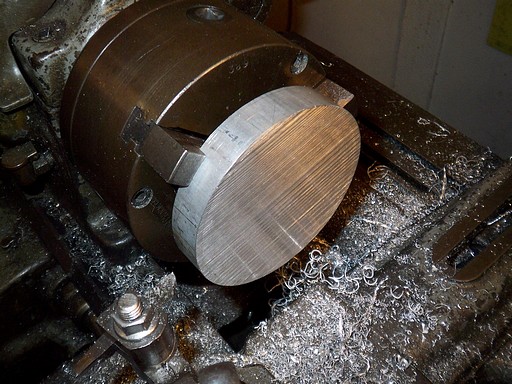 I dug up the reversed jaws for the chuck in order to hold the 4 inch piece. This first facing cut was just slamming one bandsaw-finish side onto the chuck, since I need at least one flat, round surface to start.

The piece was then flipped over and spaced with milling parallels shoved between the chuck and the flat face. This gave me some reasonable accuracy and trueness despite the different setups (and the very frighteningly loose chuck jaws). 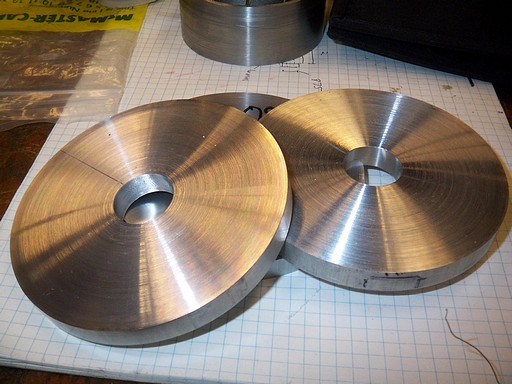 And violin, three trimmed biscuits. They’re both .393″ thick with a nonplanarity between the faces of at most .002 across the diameter, which is pretty good I think for ghettocentering. One piece was faced too far because of some strange force of machine nature which causes the tool to not cut until I crank the handle past my original target dimension, at which point it removes all material up to the new dimension at once. Oops.Â  The short piece is .385″, and has been designated as the practice piece.

Two pictures don’t quite convey the passage of time, but these three discs took two hours. 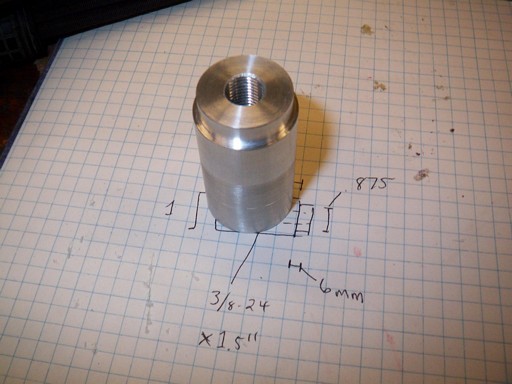 Because you can’t machine an outer diameter while holding onto the same outer diameter, I had to make my first metapart, a part which helps make parts. Dale clued me in on using a mandrel, or custom spindle mount, for machining the other features of each side plate.

This doohickey is made from 1″ aluminum round and has a .875″ section which the discs mount on. A large custom washer (not shown) fits the bore of the discs from the other side. The whole thing is retained by a 3/8-24 bolt. Like a giant inverse prop adaptor, almost.Â  Each disc has a center bore of .875 (or close enough to it) to mount snugly on the mandrel. The were, of course, made using the not-boring-bar. 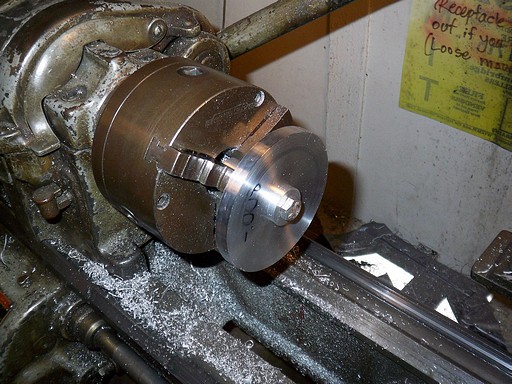 Test cut! I threw the short disc onto the mandrel and tested everything. Seems to work great, and the runout is minimal once the mandrel itself is secured and centered. I called it a night there, as it was somehow 4AM.

Now that the raw outer-dimension parts for the side plates have been made, I can take another evening and actually make the final parts. More pics to come! Everything is actually round this time! Holy Robot Jesus!