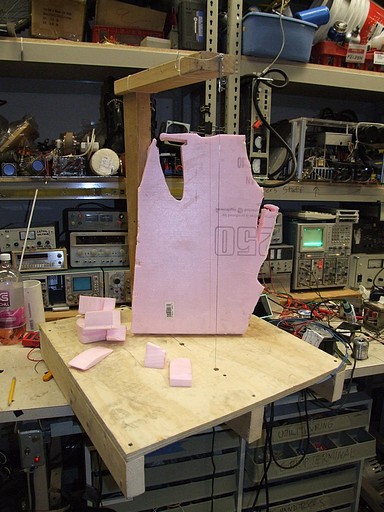 I’ve been spending a little bit of time thinking about how I wanted to approach a hot wire cutter. There were several designs available – hand-held, portable (but large framed) like this, horizontal, and vertical, like what I ended up doing, and plenty of plans and advice from people who have built them were on the Internet. I was also playing around with a few different methods of keeping the wire tensioned. An initial tension set by an adjustable screw or something isn’t enough, since the wire relaxes when hot, so it needed to be some sort of spring loaded tensioner. And of course I was also investigating what materials I could make the structure out of – wood was easy and cheap, 80/20 was more legit and potentially lighter, and in either case MITERS had plenty lying around.

Then I was told I was acting too much like a grad student.

Enraged, I beasted the above product in 2 hours without thinking about it, and it works great. There’s just something about academia that makes you stop and think about things too much.

I could use a little (read: tons) more wire tension, since I bought 22 gauge Nichrome wire, which really should be under something like 50 pounds or more of tension here. A little extension spring provides maybe 10 pounds, but that’s enough to get good results if I cut slowly.

So what’s next after this? 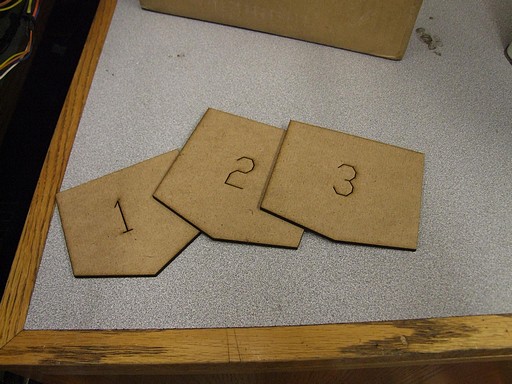 I’ve been waiting for a foamcutting solution before I started on Chuckranoplan 0004, since it was going to be, you know, made of foam and all.  With the hot wire cutter done, I made templates that represented the body sections. They are to be glued to the ends of a piece of foam to act as a wire guide. The templates above are made from 1/8″ MDF (or some equivalent particleboard… it was found in a pile). The laser did a pretty good job on them, leaving a good clean edge finish, so I’ll probably keep using the stuff in the future. 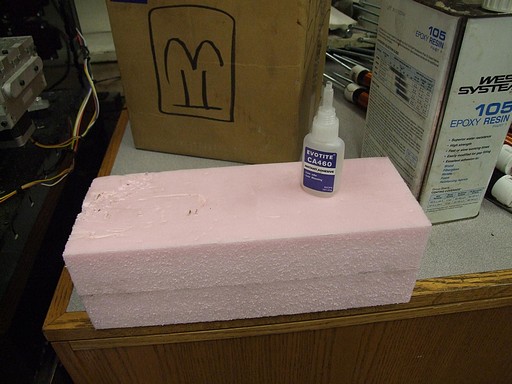 There was plenty of pink foam scrap stored at MITERS, so I found some that still had square edges and trimmed the pieces square on the vertical bandsaw using a blade guide. I must say, foam kind of machines like really dense air.

The trimmed pieces were bonded with some foam-safe CA glue I bought a while back, in the absence of the classic solution 3M 77 adhesive. I’ll need to run to a hardware store to get some of that later. They were then sanded slightly so the ends were squared up. 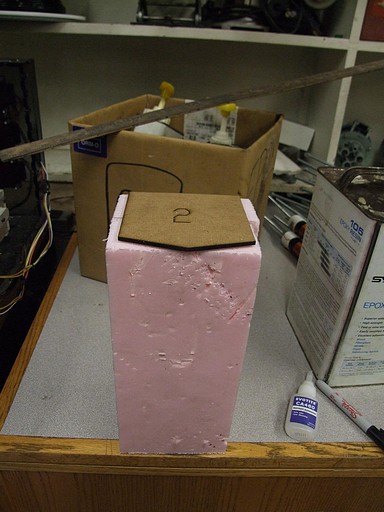 I then glued the templates on the end. This piece looks like it’s a little short to catch the tip of the V there, so that tells me I’ll need a stack of three in the future.

A few minutes of wiggling a chunk of foam around a hot wire later, he result is… 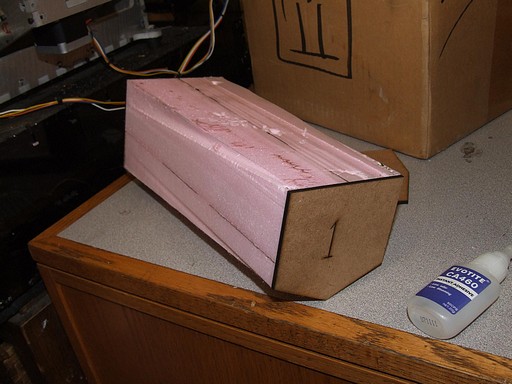 Overall, I can’t say it turned out bad. In fact, it was much better than I had expected. As a confirmation of the general rule of thumb I seem to see everywhere, a slow and steady cut is better than beasting it.

What I did observe, and which warrants the most practice, is making sure I end the cut at the vertices of the cross section simultaneously. In other words, making sure the wire is taking the shortest possible path between the two points. Otherwise, this happens: 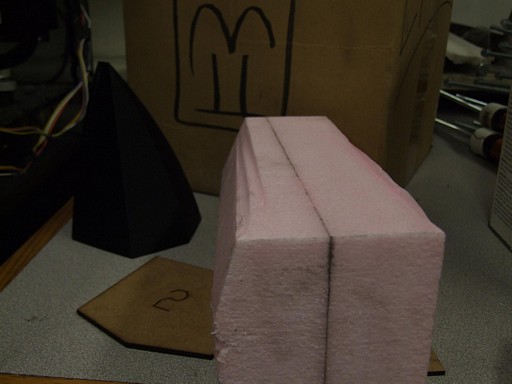 If I slip one corner first by accident, it makes a hyperboloid-like surface. In the aeromodelling world, I think that’s called an oops. 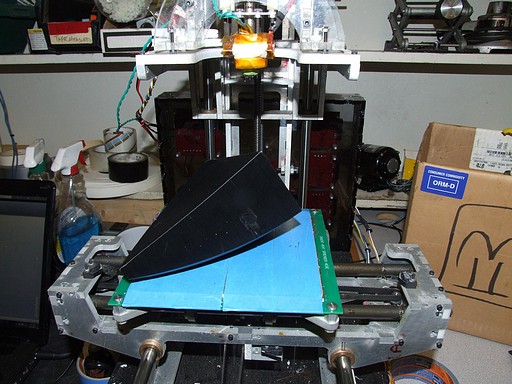 I made a test print of a new nosecone design that is substantially smaller than the last one. The ducted fans were going to be mounted on the nosecone portion, but I decided that it was perhaps not a good idea to hang some screaming EDFs off a thin section of printed plastic. So, the foam body section has been made longer in order to mount the fans, and the nosecone got correspondingly shorter. This also made it easier to print – the large cross section at the back was having trouble with splitting and cracking. This new nose should be completely hollow, nonstructural, and easily replaceable when I inevitably faceplant 0004 into something.

This is also a two-layered (1mm wall) print. The weight of the nosecone should be about 1.75 ounces…. meaning I don’t have a scale precise enough to actually weigh it.

The real part will be made from white ABS so it can be painted easily if necessary. I’m almost out of white ABS, but still have plenty of black left over, so this test piece is in black ABS. 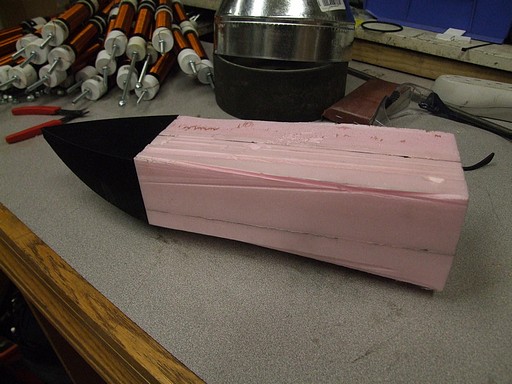 Besides the wire slips, the test fit looks pretty good. There will be a total of 3 foam body segments and two wing sections, along with two wingtip pontoons. Looks like there’s alot laser cutting in my future.