Well, technically I didn’t say that; I just said I’d never print a whole model except for geometry studies and laughs. However, I still intend to use the capabilities of MaB where it would make things convenient. Some of those Areas of Convenience include the front and back of the fuselage. Planes and ships alike are usually pointy, but that implies curved surfaces that I don’t really have the patience to carve by hand.

So here’s a picture of the biggest thing by enclosed volume that MaB has ever printed. 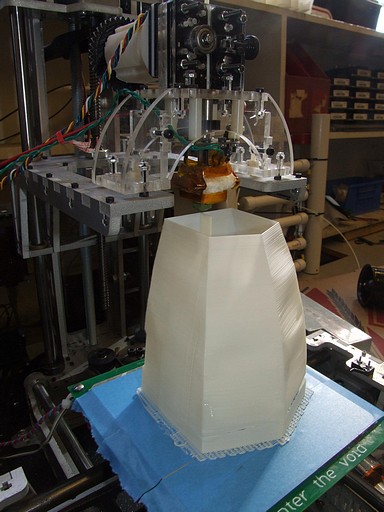 The hull of 0004 is about 4 inches square. The tapered portion of the nose is 7.5 inches long by itself, and that’s just a bit under my 200mm maximum Z axis travel limit. The above print is just a raw single shell export of the nose, with no internal ribbing features. And it definitely shows in the wobbly, bowed sides and corner splits. This was mostly a quick test to see if MaB would even be able to pull it off. 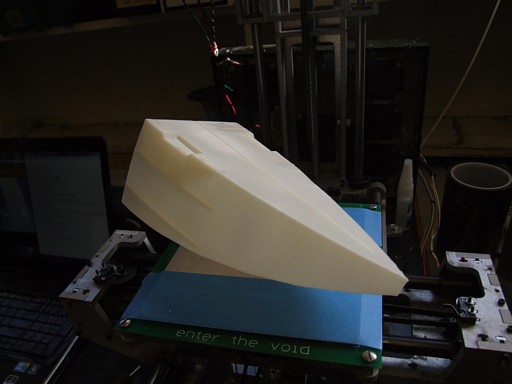 The answer: Yes, but just barely.

This revision has lots of internal ribbing added to keep the sides stable as the whole thing is built up. Those indents in the back are eventually where I’ll mount the pivot hinges for the ducted fans. The total weight of this thing is about 1.8 ounces.

What this view doesn’t show is some of the back corner lifting that occured. When you’re building a part this huge without surround-heating, inevitably the thermal stresses in the plastic rise above what the masking tape interface can handle.

It seems like the largest parts I can realistically make without that warping are about 3″ x 3″, or something like 50% of the way up this part. So I might actually not print off the entire nose of 0004 at once. I might take another cross section at said 50% mark and make the back 50% from foam. It’s probably better off that way, since I don’t particularly trust a thin wall plastic part to hold onto a pair of screaming ducted fans. The result would be that only the tip of the nose, about 3-4″, will be hollow ABS.

So what’s this thing going to be made of anyway? I spent a bit of time splitting the parts up into their different anticipated materials to get a better weight estimate: 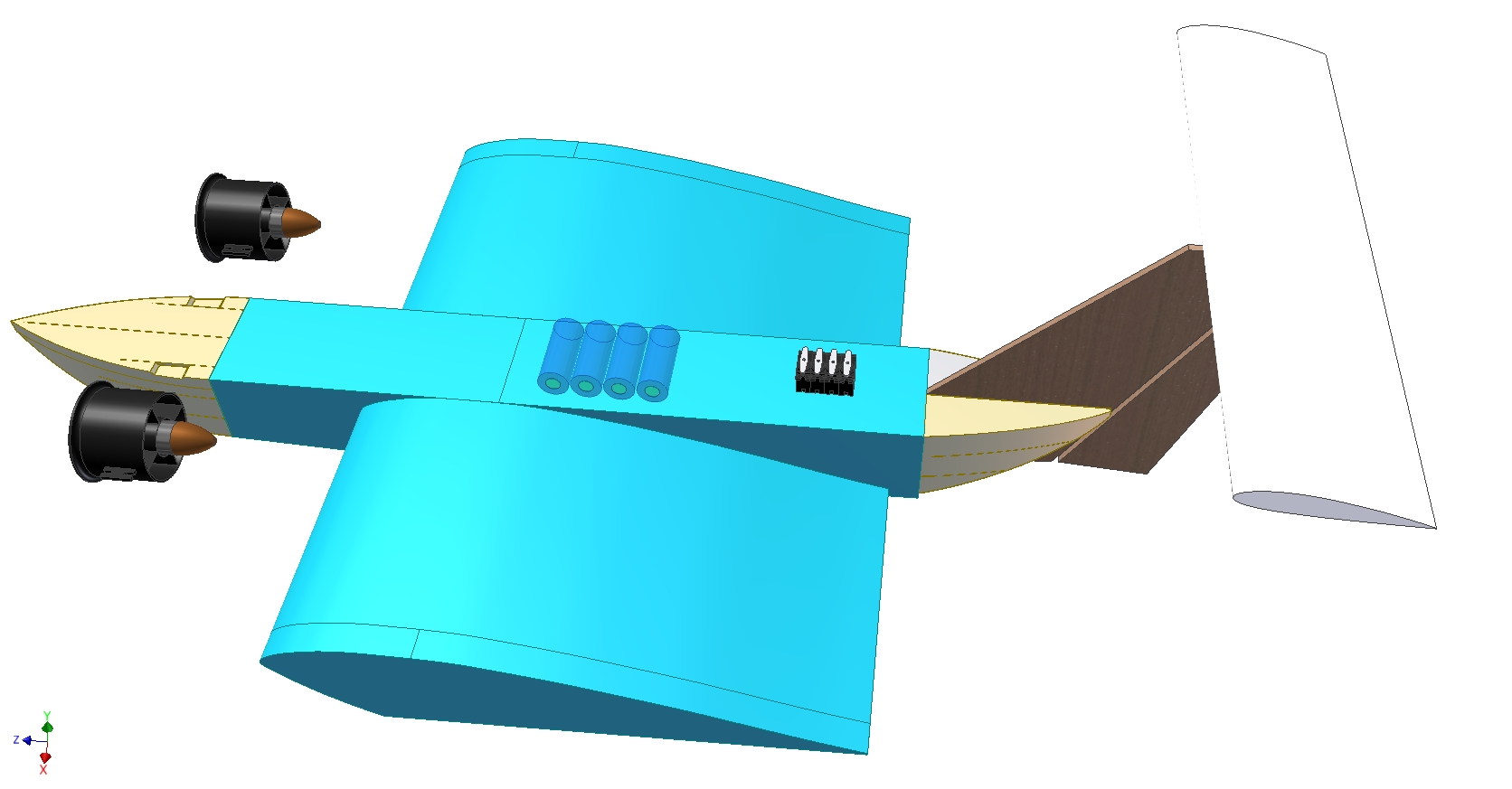 I swear that is not the final color scheme…

Most of this thing is going to be chunks of blue Home Depot XPS insulation foam (or pink – it could end up pink, depending on which one I see first!). The tailplane is “wing stock” EPP foam, shown here in white, and the vertical stab is balsa. The balsa tail is surrounded by two hollow shell prints that round out the stern area. I’ve also thrown in 4 A123 cells for kicks, though realistically I might use a 4S / 3Ah lithium polymer pack for maximum energy density. The A123 cells are easily available, but not that energy dense. The little HK939MG servos I got were also meticulously modeled and inserted.

I also modeled the HK3720B 70mm EDFs. I got a chance to actually spin one up…. and it’s beastly. A pack of them can probably take on Fankart, and I’m tempted to buy like 10 more because why the hell not. I definitely got one up to almost a kilogram of thrust, and I was running into the power supply current limit.

The calculated weight of everything shown is about 2.5 pounds, with slightly low estimates for foam density. If I assume the foam is closer to 1.3 lb/ft^3, the weight increases to about 2.8 lb. The two EDFs by themselves outweigh the entire superstructure. I still find it mildly wrong to think about something 1.2 meters long only weighing 3 pounds.

But, in other words, 0004 will have a greater than unity thrust to weight ratio with both fans installed. If it still fails to do anything, I’m going to commit a very slow and ritualistic suicide somehow involving a waterjet (because that would be the best way for someone like me to go, right?!). This thing better hang itself in the air for absolutely no reason.

Still looking for feedback from real Crazy R/C Airplane People… I know at least one of you read this site!

One thought on “A bit of sporadic Chuckranoplan 0004 work”