“Hey, does this thing work?”

With this, I present the end result of another completely unproductive day: 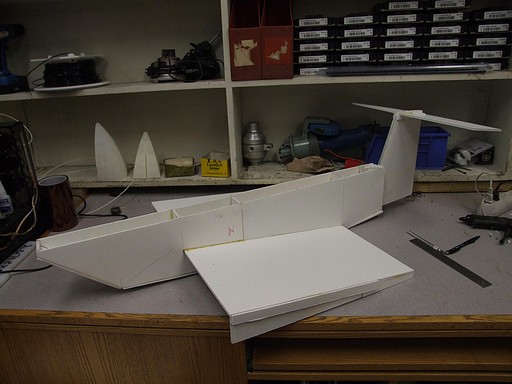 Paper-chuckranoplan grew! It was a carefully tuned process of feeding and watering, as well as exposure to the proper amount of cosmic radiation.

Or carving foamcore. Whichever one you think would work.

Paper-chuckranoplan 0002 (the last effort, while nicknamed 0004-FML, has now been given its official designation) is about 1.25 meters long (45″) and has a .6 meter (24″) wingspan. The tail span is 18″. This took about 7 sheets of foamcore and like two whole hot glue sticks to finish. 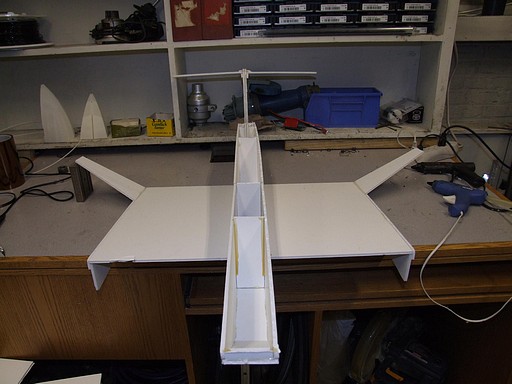 A view from the front. I built this frame double-walled since a single-wall one would just look silly at this scale. In this picture, I’ve also added the roll control winglets, which are 7″ span (each) and 4.5″ long at the root.

Being double-walled and large, I might actually commit some of my recently purchased modeling components to it. In other words, it might get flight electronics. I actually ended up using two 3S/1.3Ah packs as nose ballast (in lieu of finding a large enough nut).

So how well did it do?

Like awesome. Walker Memorial’s first floor is about 100 feet along the diagonal where I did most of the flights. I estimate PC0002 was able to glide about 80% of that if I gave it a good shove. I’d say that’s legit, and totally waiting for a set of ducted fans. I was constantly shifting the CG aroud during the tests, which is why some of the flights look a little shaky. The CG really is crucial in these things – too far back and it never picks the tail off the ground (or just straight pitches up and then falls over), and too far forward and it just drags the nose the whole thing.

2 thoughts on “When Building Russian-inspired Machinery, Do as the Russians Do”