I’m going to throw it down right now: the next Chuckranoplan will be a 100 meter model, like the KM here. I’ve come to the dejecting realization that air molecules, in fact, do not scale. At the ~10 wingspan inch scale I’m working with right now, it requires a level of construction delicacy that I can’t quite fathom. Moving to a much bigger model allows a great increase in the wing area, and a few grams here and there won’t matter as much. It will also force me to work outside my 3d printing work envelope, so I’m not just sitting there watching the thing be made. I can finally use real parts.

If you haven’t figured it out, that’s me saying that 0003b is still too damned heavy.

However, I’m inclined to believe that this round of “too heavy” is in fact caused by my choice of power system, which as i have been informed is for something like 3 or 4 times bigger. What it boils down to is that most little models like this weigh less than my battery. That’s what you get when you have a background in things made of solid metal and carrying as much battery as you can shove on it.

I left 0003b in mid-construction before taking off to Monaco, so here’s what happened after I dropped everything back off in MITERS. 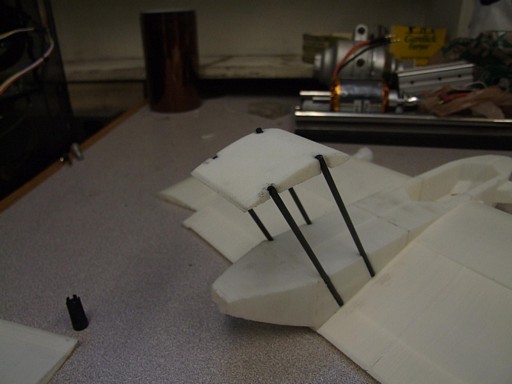 The advantage of using these edge-slots to mount the tail is that I could glue down the center portion and verify everything before throwing the outer tailplanes on. This helped prevent another drag chute situation like last time. I just fixed one corner with CA glue, then fiddled with the angle and pitch until it looked right. 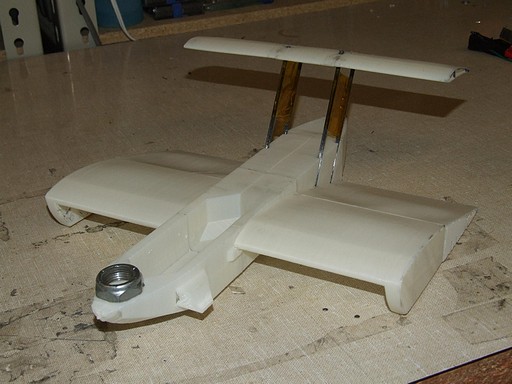 And here’s the base model completed, with a single Nut of Center of Gravity Shifting. I’ve added Kapton tape around the tail rods for extra style points.

This model by itself weighs 4.2 ounces. Kind of chubby, but becoming more acceptable. It actually glided fairly well alone, staying aloft after a strong pitch for about 15 to 20 feet down the hallway. With the NOCOGS installed, there was no pitch-up tendency… well, unless I accidentally threw it up in the air. Then it immediately rolled over, lacking any real vertical or dihedral surface. 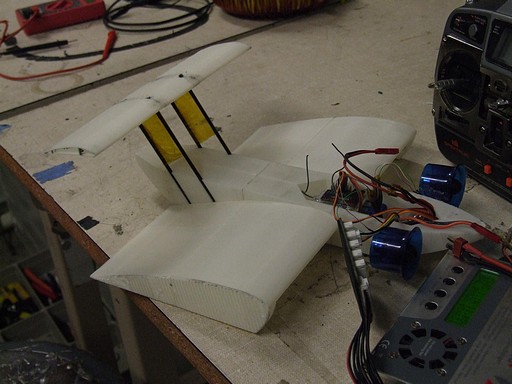 And here it is with the 30mm mini electric derpy fans installed.

Anyways, here’s where it went totally wrong. The power system doubled the weight of the thing to a full 8 ounces. Now it was just kind of sad and hopeless. While it would get about 10 feet on its own thrust, it would quickly start veering in a circle due to ground contact. It didn’t really help if I gave it a head start by pitching it – the wimpy fans couldn’t hold up the weight of the thing after a few feet anyway.

Time to do it for real.

The plan is to move straight to a 1 to 1.5 meter model (yet to be CADed or materialized in any form other than scribbles in a notebook) that follows roughly the same wing geometry.

The construction will be fairly standard foam cuts, with areas letting me take advantage of the better manufacturing facilities I currently have available, such as laser cut bulkheads and stringers and the like. Difficult geometries such as  areas of multiple curvature (like the nose and tail) are areas where the 3d printer really shines, so the extremities will still be thin-shell printed. Because the thrusters will still be up in the nose area, it will be easy to integrate the motor mounts into the nose just like I have done now. I’ll probably also whip up my own mounting brackets.

The thrusters themselves will finally let me get back into power levels I’m more familiar with. I’ve currently spec’d out these 70mm EDF units from Hobbyking, but just in case, I have this miniature 250hp bus motor also spec’d for dramatic overcompensation.  Oh, yeah, it’s going to have control surfaces! I think I’m comfortable enough with model aircraft construction that now I’m going to try to integrate a rudder and flaps into the thing. No elevators yet, since hopefully this thing will stay within h/c < 0.1. I’ll probably use a garden variety park flyer servo for each, in order to keep the weight down.

The anticipated weight of the entire thing is about 50 oz or less. This is actually very difficult for me to fathom. How the hell does something which barely fits on my desk weigh as much as my beetleweight? The materials and construction methods used for aeromodelling is below what my mental finite element analysis can handle. I’m going to have to get used to it.

Finally, using all those model airplane things for their intended purpose.