I’m proud to say that the LandBearGryllsMelonSharkTankWeek is now completed with the exception of electronics. Which is really to say that I’ve finished another dumb aluminum sculpture and have reached the end of the design assembly file, and will now proceed to make things up as I go. It also means I strongly risk finishing it next year, or never at all. 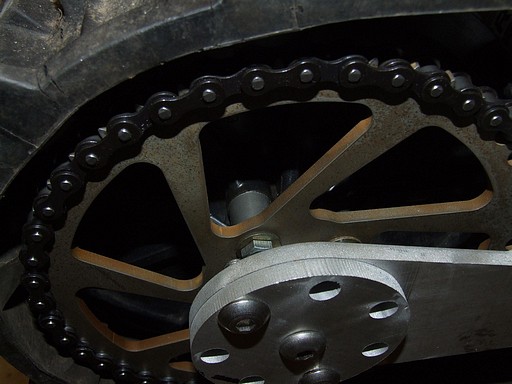 So, the last time when I put the chains on after knocking out the motor sprocket adapter, I discovered something terrible but not very surprising. Namely, the distance at which the chain sprocket is mounted from the face of the track sprocket, combined with the absolutely terrific (in the classic meaning of the word) molding quality of said sprockets, meant that the chain would simple get jammed by one of the protruding track sprocket tooth things and lock the whole assembly solid. Now, having a tracked vehicle in which the tracks are immobile is about as cool as having a traffic cone – not even one with a blinky thing on top, mind you. So I made eight quick little spacers using aluminum rod in order to positively place the sprockets further from the track sprocket teeth. 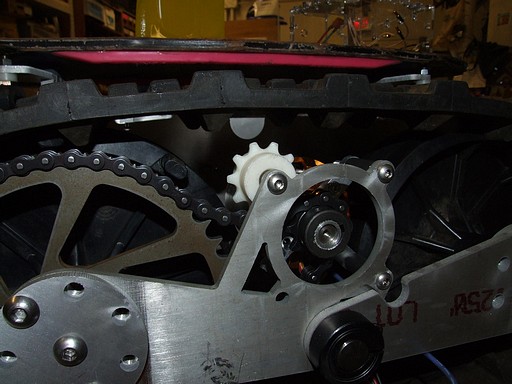 I was trying to find a 1.5 to 1.75″ round of some slippery material to make a chain tensioner with when suddenly I realized that I had a 3D printer and so might as well print some damned idler sprockets. This idea worked splendid, but the first pass just used a copy of the motor sprocket, which was actually too small to reach the chain. How embarassing. Downloading and editing an 11 tooth sprocket model fixed the tensionless tensioner issue. I like this whole 3D printing thing.

Incidentally, during this process, I discovered that MaB’s extruder motor had finally broken down. The DC extruder motor has a bad reputation in the community because of its frequent and often mysterious failure mode where the terminal resistance drops significantly from ~30 to 40 ohms down to as low as 1 or 2, enough to cause the extruder controller to freak out and shut down… but it would still work otherwise. I temporarily bypassed this issue with a 10 ohm power resistor shoved inline with the motor leads so that the extruder never sees in practice more than 1 amp, which is well within the rating of the driver chips. It meant my test print came out slightly anemic because of the power penalty, but a temporary adjustment of the thread width parameter fixed it.

It also means I finally manned up and ordered a compatible stepper motor to build a stepper motor head with, because the software and hardware fully supports them now. 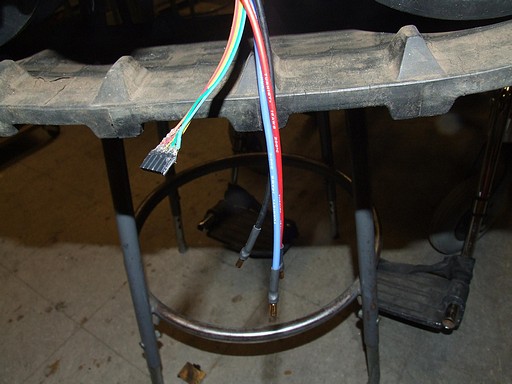 While contemplating tensioners, I added terminations to the motors. The usual 5 pin sensor connection and 3 bullet connectors for the motor phases goes on. 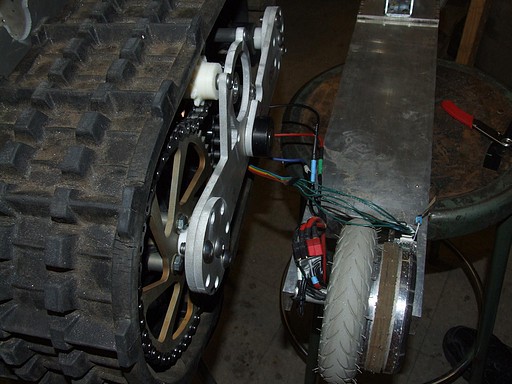 What does having the motors all wired up means? TEST TIME!

I ran a quick first run using the Kitmotter Demo as a commutation source. Even on the built-in 15 amp battery current limit, the track assembly turned smoothly and with a pretty decent amount of torque. I’d say the rewinding of the Turnigy motors to twice the number of turns and Wye termination was successful. Next, Shane wanted to see how much a difference his look-at-me-i’m-so-special-and-control-theory-minded sinusoidal field-oriented control motor driver would make over the cheapo square wave block-commutating Kitmotter controller. The resulting test video is below.

Note that while there isn’t a test video of the regular motor driver, the noise in either case was strongly dominated by mechanical sources… like the flapping chain and track belt. 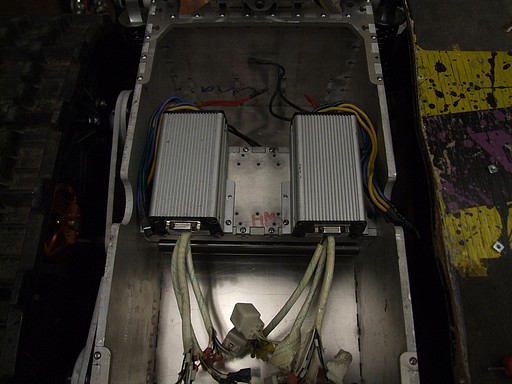 Enough stalling and delaying the inevitable. It’s time to start on the electronics, and the first order of business is mounting the motor controllers (a very mechanical step, fortunately). These are the deprecated KBS36051s scrounged from the CityCar Graveyard. I don’t intend to use the stock something-or-other connectors that house the signal contacts; and half of them have been cut out anyway, so I’d need to make an interface board with some kind of signal processing onboard, probably Arduino based.

The final plan for LBS is to have a dual-hand wireless control solution similar to the glove control I have set up for the skates. However, I want to ride this thing sooner than that. So, for the time being, I’m going to run a wired control from a makeshift interface board to… I don’t know, two knobs or something. Here’s the beginnings of said interface: 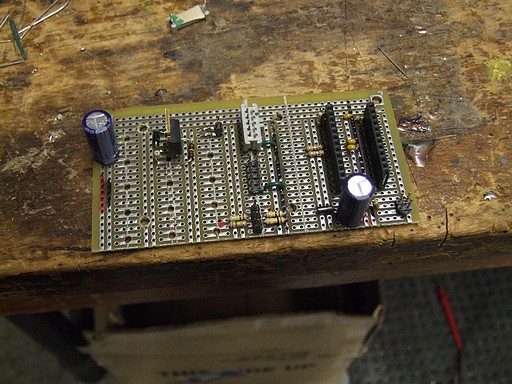 I’m not sure where to begin describing it. It’s being constructed on the remains of half of a 6.131 class protoboard salvaged from the bowels of MITERS. On the right is the obligatory socket for the Mini Arduino. This style of protoboard really does not suit the point-to-point wiring method I’ve taken a liking to. Component placement here isn’t freeform due to the crossing rows of conductors, some of which I’ve had to slit to make space for more adjacent parts. So, I’ve yet to actually add wires – just trying to figure out where to put parts for now.

Anyway, on this board lies a contactor driving switch (second column from the left), the two Kelly interface connectors and throttle connection, the Arduino socket, and then at the very bottom right is the eventual rider-detect switch, which will just be two OR-wired microswitches read to determine whether or not I’m still on the thing. The idea is that after a certain delay of neither switch being closed (to account for shocks and airtime!), the throttle will be brought to zero and the contactor opened to prevent the vehicle from moving. The contactor would only block or conduct motor controller power, so the thing doesn’t turn off, but just Positively Stops Moving unless I ‘m on it.

I found some 10-pin IDCC connectors for the controller interface, but really only need 4 wires on each – an analog throttle, a digital “enable” line, a reverse toggle line, and ground. But I had them, so they’re going on there. 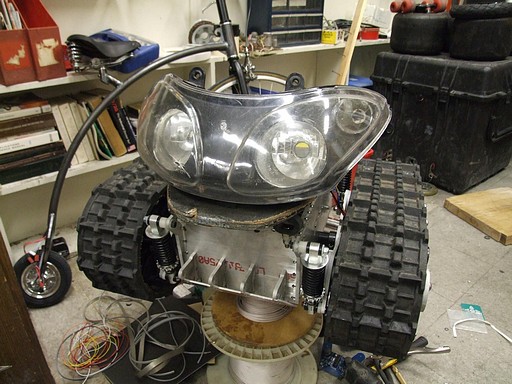 What the hell? Is that some kind of cracked-out anime version of WALL-E?

While that’s a great idea for Halloween, it’s actually the headlight module off a cheap sports bike the EVT gutted long ago for parts. Some of it ended up in here, and a specific subset of that made it close enough to me such that I was able to pick it up and giggle uncontrollably. No matter how tacky and bubbly it looks, it’s kind of growing on me.

By the way, the stick with a wheel back there is pf. 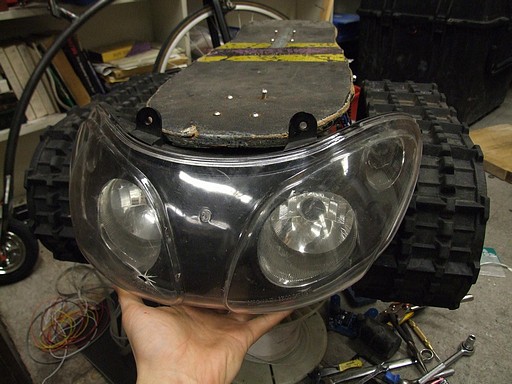 Alright, so I actually think it looks better in this configuration. It looks like some kind of treaded insect.

I might not actually buy replacement headlight hardware for it, but I’m definitely going to design up some bracket to mount it on the front there because it looks too damn good (and by that I mean hilarious).

One thought on “Sharking Into The Future”