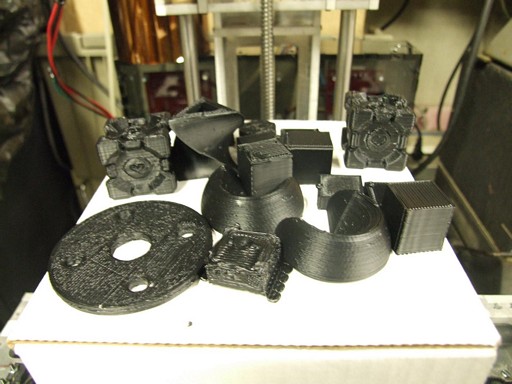 Above is the product of one night’s printing. Tons and tons of calibration cubes, then a few reruns of shapes I tried already to see if the quality improved on anything but a cube.

Let’s start with the first one, which I have nicknamed the Abortion Cube: 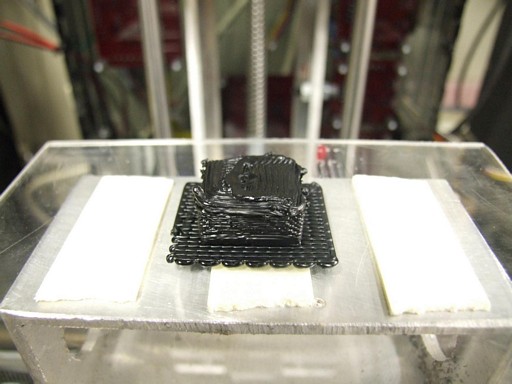 I tried the advice on the Makerbot Blog about one way to calculate a workable feed rate for the machine. From pulling a test extrusion, I found that the extruder actually worked at around 26mm/s. Unless I really missed something, that did not work out at all. It was clear from watching the epic blobular formation that the machine was in fact moving far too slowly. So I went for the logical next step: turn it up. 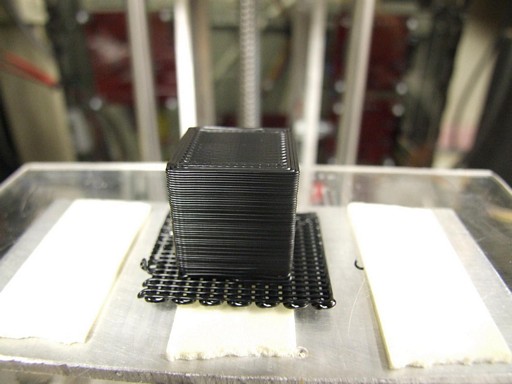 Muuuuch better. Now it’s on par with the stuff I see coming out of other peoples’ Makerbots. This was still on 0.4mm layers, though. I began playing with the “aspect ratio” of the filaments by adjusting the Width Over Thickness values and making more cubes. A wider thread adheres better to the one below it and can fill areas quicker, but appears to make the machine more prone to globbing. 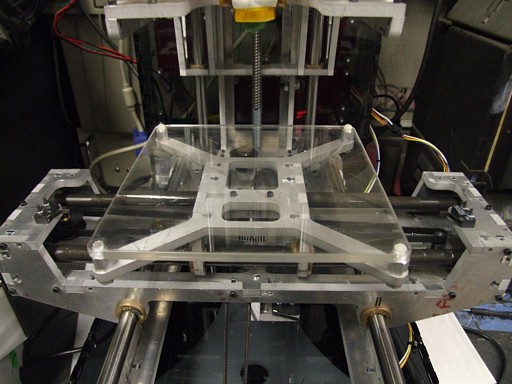 After Cube #2, I decided that a stiffer platform was in order. Further lowering of the layer height was probably a futile effort if the platform itself has more “rock height” than the layers. With Advanced Circuits still working on my trippy heater PCB, I elected to make a stopover solution in the form of a 7 inch square chunk of 6mm acrylic. This represents the final outline of the PCB (yes, it’s massive), but the heated area is a 6×6 inch  patch in the middle. 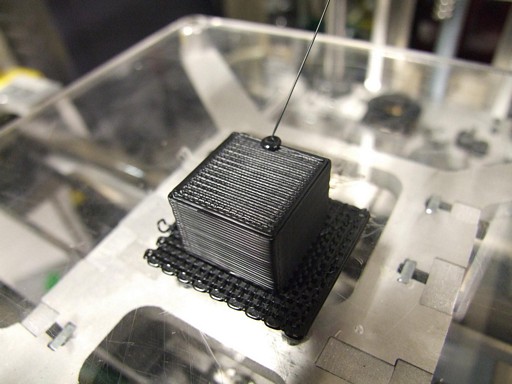 Here’s another cube that turned out great. This represents the numbers I ended up settling on for the time being. The layer thickness is now 0.3mm, and the feed rate is 55mm per second. 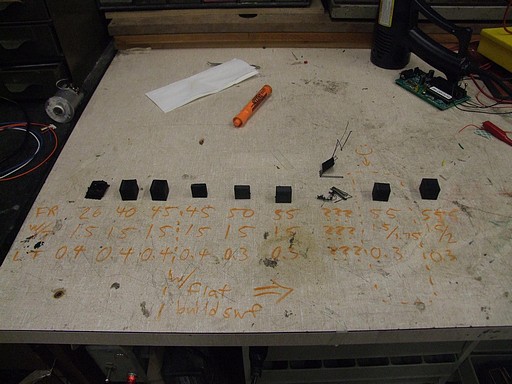 I began logging all the settings used for each cube as I made them. From left to right, the lineup represents a gradual reduction in the layer height and increase in the feed rate while trying to maintain a constant thread aspect ratio.

While making the solid test cubes, I noticed the internal fill cooling unevenly with respect to the outside edge, causing “cube obesity”. To mitigate this, I adjusted the aspect ratio of the infill threads such that Skeinforge takes them to be wider (the 1.75 in “1.5 / 1.75”), and thus puts less infill paths down. This solved the bulging issue exhibited by the two middle short cubes.

The cubes were some times stopped after 20 layers or so because I figure by that time I got the point already and could move onto the next. 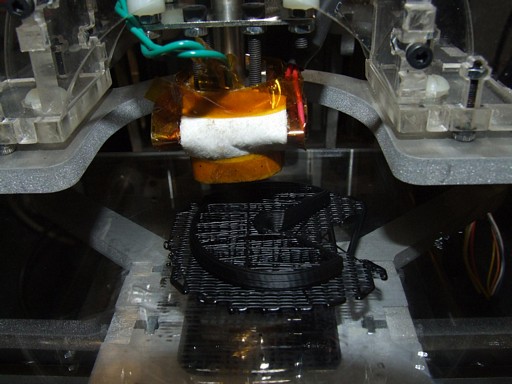 I sent MaB off on a mission to make another funky quarter sphere thing. The effects of the increased feed rate were primarily seen in the outside shells, where there was less “globbing” from the machine pausing briefly. I also went back to using the ‘straight criss-crossed lines’ method of infill, over squares or circles. 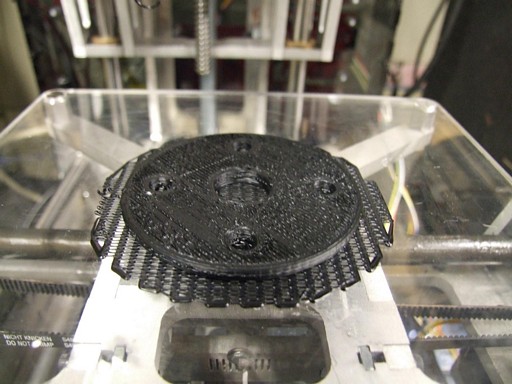 The first useful part MaB makes, however, is this spacing piece for a…. well, you’ll just have to wait and see. The part was designed to be 3/16″ (0.1875″) thick, and this print managed to hit 0.180″ consistently. Accounting for plastic shrinkage, that’s pretty close. The hole internal diameters came out slightly small, but there’s a setting to compensate for that in Skeinforge.

Here’s the family photo again. I remade the Companion Cube using the 0.3mm layer height, and oddly enough, it came out a little shorter than the first 0.4mm print. I also had a second go at making the funky triangular prism (for lack of more descriptive terminology…)

The finish at 0.3mm per layer on convex (external) surfaces and straight lines is pretty impressive. Concave surfaces, though, like the inside surface of the quarter spheres, are still a bit rough.

Overall, I’m content with how dialed in the machine is right now. The current setting is now my baseline for experimenting with new ones.

In the coming days, I hope to push MaB to the limits of sanity in terms of axis speed. I’m currently aiming to hit 70mm/s and 0.2mm per layer.