This will be a really short update, since there’s not too much work left on Über-RazEr besides putting it together. Last time, I got the motor spinning by paralleling the two halves and running them on one controller. I’m now proud to say that the twin-DEC controller is also working. Not under load, mind you – that is testing to come. 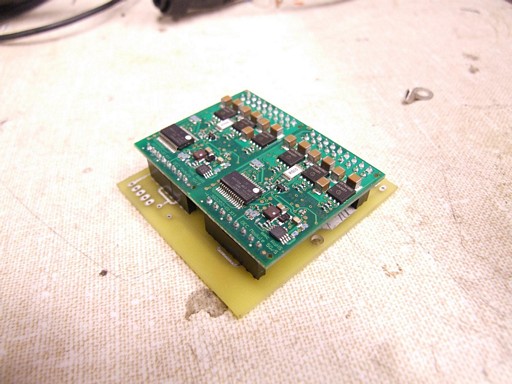 Putting all my DECs on one board is akin to putting all my eggs in one basket, but these are some pretty hardcore eggs, so I think they’ll be fine. The carrier board is pretty much just there to route signals, as the DEC modules are more or less self contained.  The inputs to the board are the hall sensors and their power (5 wires), a throttle (3 wires), and a… reverse switch. This might end badly. 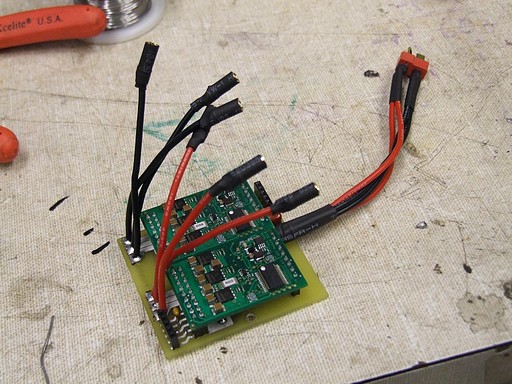 Here’s the board after being prepped with headers and cables. A power-up test confirmed that I somehow avoided making solder bridges between my .01″-separated power and ground traces. 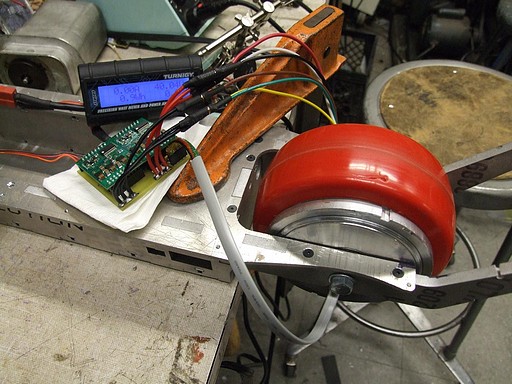 I initially powered everything off our variable power supply in the interest of not dramatically grenading the DECs with 40 volts of lithium batteries. However, the pulsed current draw of the motor was too much for the PS to handle – it flickered in and out of constant voltage mode about as quickly as the motor spun. This power instability likely contributed to a few DEC freakouts – which fortunately are soft shutdowns, not explosions like if I had made them.

Not only that, but a few times I slowed the motor too fast and the quasi-regenerative characteristic of the DECs caused the power supply to latch into shutdown.

So I threw it all into the wind and hooked up the 40 volt A123 battery. And here it is:

I recorded the no-load speed this time at 1,360 RPM, pulling almost exactly 2 amps no load, confirming the ~33 RPM/volt characteristic.

At this point, I think it’s safe to start packaging up the scooter. I’m very curious as to the ability of the hacked DECs to run under load.