My annual robot party, Robot Battles @ Dragon*Con, is right around the corner. Again.

This is a competition I’ve been attending since 2002 and competing in since 2003 – it’s been my “end of summer festivity” for every year since then, except 2007 when I was retained by the mits for freshman orientation.

For most of my RB history prior to the MITs, I’ve had a primarily drivetrain-centric entry, Test Bot, that worked all the time and was undefeatable so long as I didn’t mess up. After that, beginning with Test Bot 4 in 2006 and really kicking off with Uberclocker version 1 in 2008, I began focusing more on cool actuators and weaponry.  That probably explains why I haven’t won anything since, or really have a robot that can put on a performance without being unreliable. Cool weapons and whirly things are funny until you can’t get it to move straight across the arena to beat the other guy senseless with it.

I’m kind of sick of that. Lack of any real motivation to fix the drivetrain issue with Überclocker Remix thoroughly has led to its losses in 2009, 2010, and 2011. That’s 3 straight years of fail, and I can even name the reasons why. In 2009, the robot lost drive functionality early on because I dared to think that using $2.50 drive motors was a good idea (and brought no spares, also a good idea). I upgraded the gearbox and motor rig to a custom DeWalt solution for 2010, but it slipped a poorly-made output shaft and I didn’t care enough to try and ninja-fix it during the actual event. And finally, last year, with the drive motors finally reliable, the robot ditched chains left and right. Literally. Both of them. Poor tensioning results in the chains catching on… something – I couldn’t tell what was actually going on, but it cost me the tournament. Again, what just totally sucks about it is that it was no fault of the design itself, but just my inattentiveness or ambivalence.

So I’m starting a new 30lb build which will be 100% drivetrain. The goal of this build, really, is to just come up with something that’s fun to drive and run into things with again. Piloting the (comparatively well-handling) Cold Arbor test rig around a few weeks ago reminded me of how important it is to keep your robot short, dense, and 4WD with the center of gravity smack in the middle. Soft wheels helps too, as does an immense amount of horsepower in the motors. This 30lber will act as a baseline to compare all my future designs with. The drive will be modular, with one motor per wheel, quickly replaceable and with easy to find spares (something Clocker has never been very good at). The frame will be pretty damn near indestructable. If I can’t beat the all-drivetrain pushy-brick with a new design, then anything else is pretty much hopeless. It will function as the null hypothesis test of robots – to be a proven design, it has to reject (/defeat) the null hypothesis. 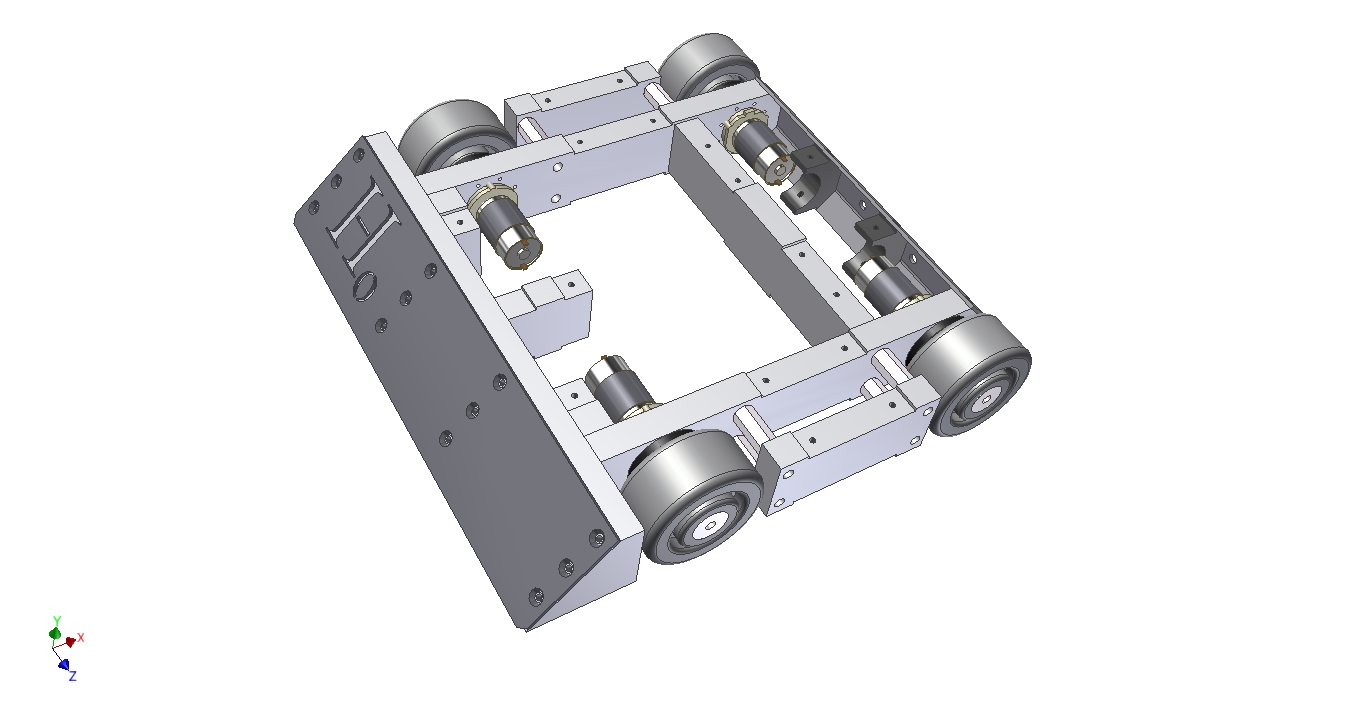 Well gee, it looks like I’m almost done designing it already. Usually my CAD posts start off with a rectangular extrusion or something equally simple, but I’ve been slowly digesting this design for a little while.

The design above is the “first pass” appraisal of the concept. It has a solid UHMW front wedge that was intended to be carved from a 3 x 4″ block. That turned out to be $150 of UHMW, which seems to have gotten way pricier since my last UHMW brick in 2006, because UHMW is just condensed natural gas or something.

Note how it gets a little weird and irregular out back – I wanted this bot to have no rear traction gaps. A classic “box” frame leave you a finite, usually less than 45 degree, tip angle before the frame lifts the wheels off the ground (for Test Bot 4.5 this was only about 25 degrees because it’s so damned low). One solution was to cut up a pipe and round off the end of the frame, but this left me little space to mount the motors. Hence, I settled for 45 degree ‘facets’ that can get pushed further back to let me add mounting features for the drill gearboxes.

The ground clearance is called “true” 0.75″ because the top and bottom covers are inset into the frame. This leaves me with a 2.5″ frame that has 2.25″ of internal space given the choice of 1/8″ polycarbonate top and bottom, which actually turns out to be not that roomy. 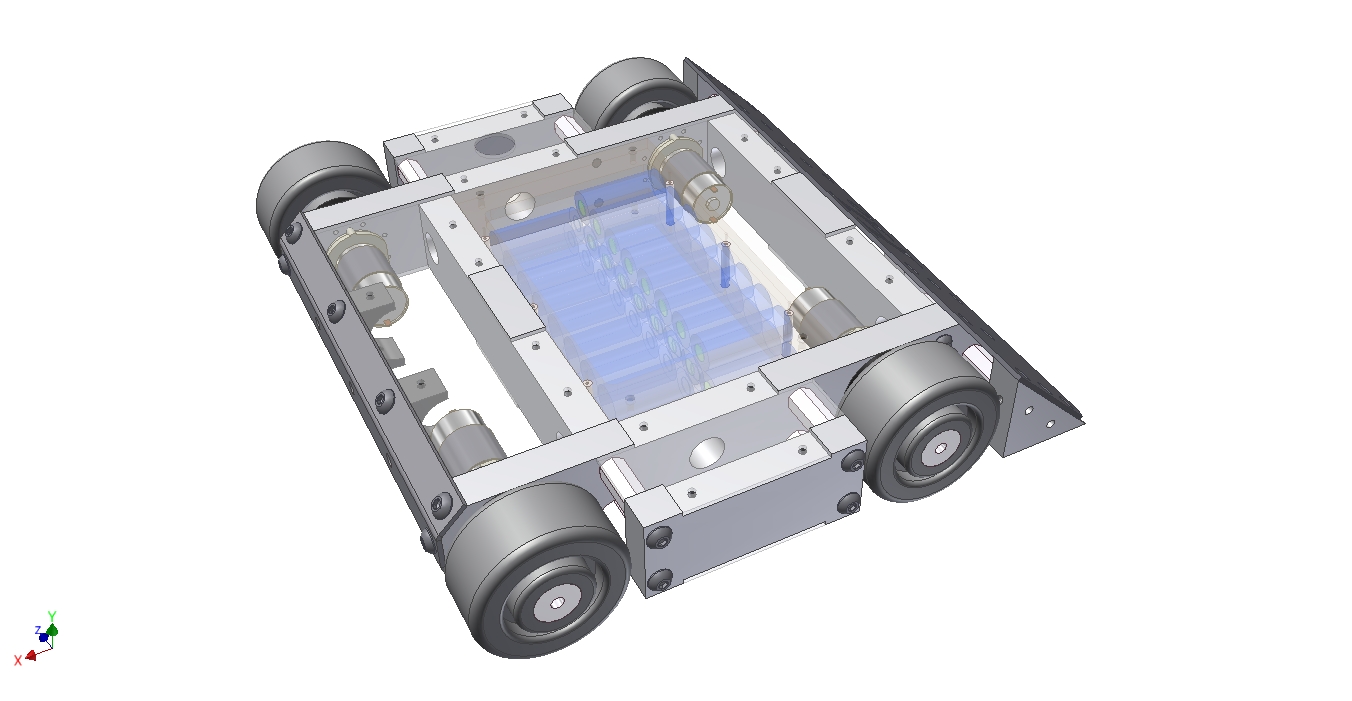 Here’s a “second pass” of the design. When I do a “first pass”, it’s generally just to puke ideas and generate shapes. Some times I find that the shapes end up being nonsensical or impossible.

There wasn’t such an impasse with this design, but I decided to get rid of the solid UHMW brick front. As funny as it might be, I really can’t justify spending $150 on UHMW just to use maybe $70 of it. The wedge ‘sections’ are made of the same barstock now as the frame. A 1/8″ 4130 steel plate forms the business end – I got a plate of the alloy for reasonably cheap, but there might not be an oven big enough for this thing with immediate reach to fully heat treat and take advantage of its strength.

The battery and its retaining mechanism is now shown too. It’s actually really hard to make an all-UHMW 30lb bot – UHMW is just not dense enough, really, so the weight needs to be made up. In this case, it’s with theoretically enough  batteries to run 4 or 5 matches back-to-back. The intended voltage of the system is going to be 25.6 nominal, 8S A123 cells, with 4 effective cells in parallel, physically arranged as two separate 8S2P packs. This should yield a decent top speed of 15mph: not too quick, but also not sluggish. Middle of the road pushybot.

The battery packs will be made with shock mounting padding, then captured inside a 3/8″ or 1/4″ polycarbonate ‘cage’ inside (hard to see, with polycarb being modeled as transparent). The cage is part of the top and bottom plates.

Electronics-wise, I’m trying to decide between the Botbitz controllers that I got to test for Arbor, or my full-custom board (yes, again): The hell is that thing? I christened it RAGEBRIDGE because, somehow, I have never managed to produce a reliable small H-bridge controller. Landbearshark’s custom controllers were a miserable failure for several now-obvious reasons. I’m also really in need of a synchronous-rectified current-control-capable H-bridge for an outside consulting project – which is really what this board was developed for.

So I took another stab at it. I took every precaution to not loop my grounds and cross my logic with power, so I hope this can become a reliable hardware base.

That is, if i ever receive it. It’s been nearly a month, MyroPCB. The excuse I got was that my order was ‘damaged in fabrication’ and had to be redone. Well hhmm, I hope it wasn’t all those vias….

The reason I’m still holding out hope for these things is because the BB controllers can’t do “true 24v” systems – the Hobbyking ESCs they’re based off of are rated to only 6S lithium polymer cells, or around 26v peak. There are 35v parts all over the place, including the main power capacitors, and the FETs are 30v parts. In other words, a freshly charged 8S A123 battery at 28.8v is most likely too much for them. And I’m not going to back down from that – NH will be too slow if I only run 6S.

Worse come to worst, I have all of those Victor 883s (classic ones, mind you… The FET layout above is clearly borrowed from the Victor883107-7.). 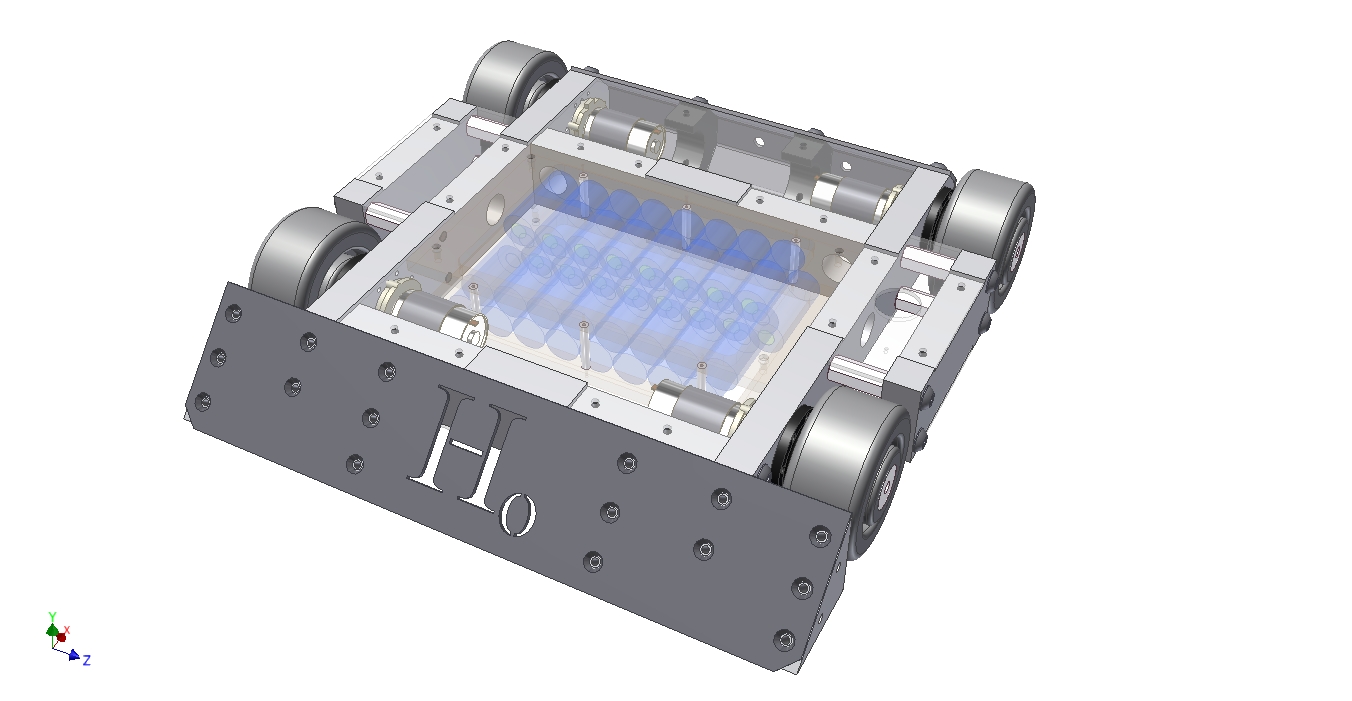 Here’s the front end of the bot. I’m most likely going to just stencil-paint (or laser-etch?) the H_0 onto the front, instead of making it a cut-through, because that weakens the steel too much. Else, I might weld a backup plate behind it.

The top and bottom (and wedge) hardware on this bot is all 1/4″-20 countersunk cap screws, with the side/frame screws being 3/8″-16. Big, meaty threads. I considered using giant lag bolts for maximum grip strength, but they were not available in anything other than “giant oversize decking and timber-clamping Hex head”.

Random little electrical details will be added soon, when I can decide on the choice of electronics. 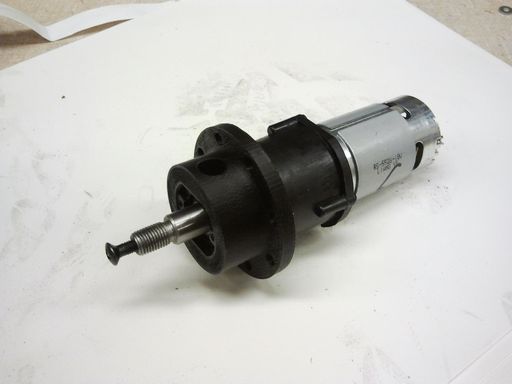 Here’s what’s going on. The McMasterbots wheel will use the nose portion of the black flanged piece as a secondary ‘bearing’. This is a scheme to avoid hanging the entire wheel solely off the 3/8″ shady drill steel axle (as is common in drillboxes). The D-shaped nose of the drill gearbox is additionally supported by the mounting flange, giving it more plastic meat. The motor is prevented from torquing and moving axially using fine-threaded set screws (the cross holes in the picture). The flange itself is screwed into the UHMW side rail.

I’ve ordered pretty much everything I’m going to need to make the mechanical bits of this bot in the coming two weeks or so. I have eight drills now, and the buffer pile on my desk is becoming insufferable.

I have to make a decision about how to build the frame. While I was initially going to buy and mill slots in UHMW barstock, I snagged a large plate (48 x 8″) of UHMW on eBay for very cheap. It has all of the square footage needed to build the frame, but separating it into chunks will be a bitch.

While my normal tactic when faced with a giant plate and needing bars and shapes would be to Just Waterjet It, UHMW is well known to be so soft and abrasive resistant that it cuts poorly. 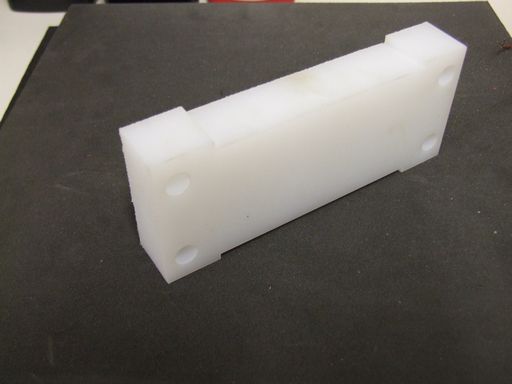 I laid out some test parts (these are the side bumper things) using different qualities to see if any were remotely tolerable. Anything short of high quality (or in Omax terms, “Quality 5”) just doesn’t even make it through all the way, and I can’t get the part out of the material! Even the above piece, which was on Q5, needs all the holes drilled out. The outline is reasonably acceptable, though, and I may make the parts which don’t need to be critically square using the cheap plate. This include those side bumpers as well as the little wedge triangles.

I bought a 4 foot stick of UHMW for the parts that can’t be waterjet-cut, but I might have to get friendly with this plate and a slitting saw in the near future.

This is not it. I have several other robot updates on deck as August rolls in, including: