Propositio Prima: It is wholly possible to put together an extremely powerful and efficient personal electric vehicle using common hobby-grade equipment for under $400 in total. Depending on the requirements of the individual, this amount can be drastically less.

Propositio Secunda: The best way to learn about something is doing it. 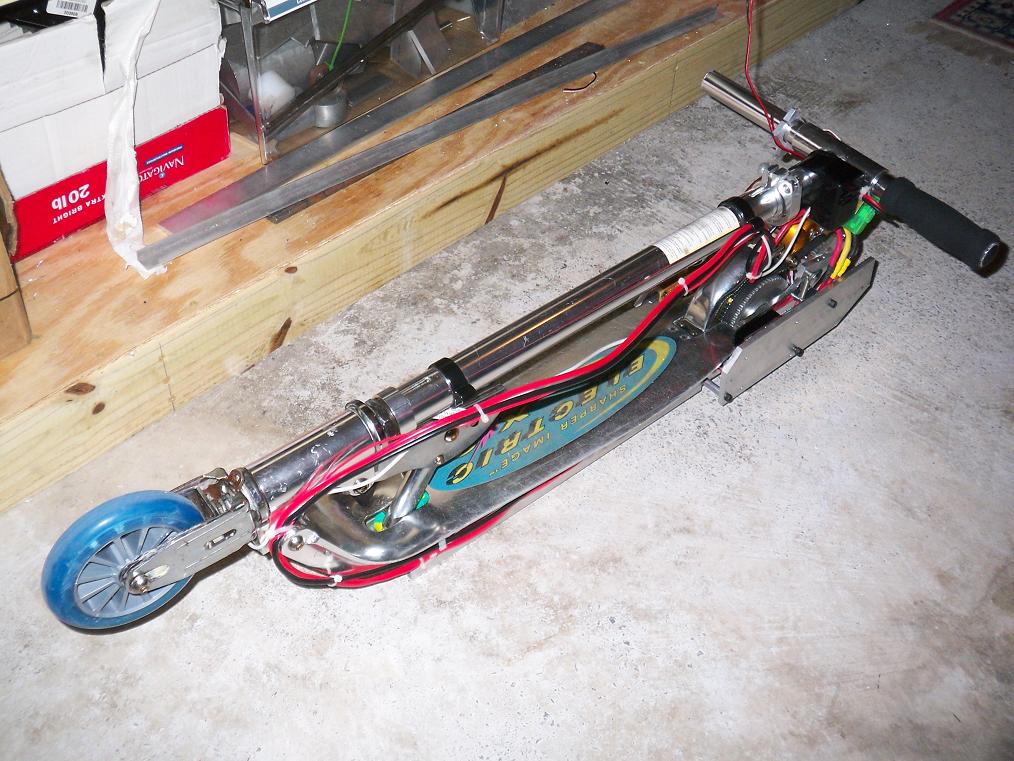 It was certainly the most fun impulsive build I’ve ever completed. What began as a desire to mount a giant brushless motor on something, anything, turned into a foray into the world of exotic power systems, electric vehicles, battery technologies, and electronics engineering. After I finally learned how to control the motor’s power, it became a great local transportation device. However, after a month of operation, I’ve decided to pull the plug on Snuffles.

Actually, it sort of pulled its own plug, but I was the root cause. The pot-to-R/C interface board pretty much completely shattered over the course of several trips around Boston. This just shows that I needed more support on the board itself. The most important thing, though, is that if you want extreme performance, electric will triumph over internal combustion. This was known to me for a long time, but only by building Snuffles did I experience firsthand the power curves of a giant electric motor.

Too giant, actually. The 3.5″ diameter brushless airplane motor was utter Ã¼berkill for such a small chassis. I couldn’t stay on the thing the first few times. Gradually, I learned that I could only stay on if I give it a really good kick start and then slowly ease the throttle in. More practical performance can be had with a motor significantly smaller – perhaps even in the 40mm range. The 70×50 motor of Snuffles would be slightly powerful even for a bike.

The successful execution of what amounted to a prototype and proof of concept therefore begets refinement and improvement. Recently, I have exercised the power of Googlepedia to perform more in-depth research on in-wheel electric motors – that is, slamming all the drive components into the structure of the wheel itself. This opens up space that would other be used to house drive components and lets you… well, use it for something other than drive components. Like cushier seats. I had used integrated motors before with Pop Quiz, which had a motor built into the blade. It worked well for the amount of quality non-control I put into it.

And so this is where the next chapter of my obsession with giant brushless motors will start. Now that I have membership at the MIT Hobby Shop and am working with the Media Lab, I have access to just about every weird manufacturing process available. Over the past few days, I experimented with designing wheelmotors for Snuffles. The goal of the design was to pack the motor into the confines of a 125mm scooter wheel such that minimal modification of the rest of the structure is needed (the only mods being, for example, drilling extra wiring access holes.) The real “inspiration” for this madCADing was my… uhhh, ravaging of several large copy machines (Example picture from earlier in the year). For those of you who don’t know, large copiers tend to have rotating-can brushless stepper drive motors.

I drew up two motors in Inventor. One is a conventional ironcore “outrunner” motor as built by R/C hobbyists around the world, using parts from the copier. The other is a more radical axial flux ironless motor which is used in high performance, high efficiency motors and generators. For narrow applications such as the scooter wheel, an axial-flux type motor seems to make more sense for space efficiency. However, I was just as successful in shoving the copier stator into the wheel.

Here are some pics.

The outside of the axial motor. Actually, they both look sort of like this. To mount the motors, I have to drill out at least one hole in the wheel mounting locations on the scooter frame to accomodate running wires outside (since you can’t really get power to something like this without wires). A hollowed-out screw will be used so the shaft can be fastened while providing access to the wires.

Here’s a shot of the inside! The coil shapes are obvious stand-ins, since I have yet to figure out how to draw an odd-shaped coil in Inventor. Nor do I intend to, since that’s over the top. The coils stay stationary, and a hole is drilled crosswise in the dead shaft to give wire access.

Two of these magnet rings are used, one on each side of the windings, to give the best concentration of magnetic flux. This part rotates, attached to the wheel sidewalls. I had to “composite” smaller magnets together into bigger ones, since not everyone makes 3″ diameter flat motors with 14 magnets (read: I can’t buy the right magnets stock)

The inside of the conventional motor. In the end, only a weird combination of metric and english unit parts made everything align and space correctly – otherwise, things were always too far apart, too close together, or some other anti-three-bears condition. Four magnets group together into one bigger magnet, and there are again 14 of those.

To understand why I’m using 14 magnets, one must understand the concept of LRKs.

Here’s the outside of the conventional motor with one side plate removed. In reality, there will be little amber copper windings wrapped around the stator arms. Or big ones… I hope to either use giant magnet wire to push as much current as I can through it, or use a multitude of tiny wire strands in parallel. The latter achieves better volumetric packing.

When will I build it all? Nobody knows. Unfortunately, I have these stupid things called classes.

However, I hope to integrate this with the research I am helping the Media Lab with – which involves, of all things, light electric vehicles. So watch this space!