No, I haven’t gotten into the electronic music industry, but a lot of electronic was definitely consumed during this stage of the CAD! The build season is in its last week or so, which means I’ll be prioritizing shipping a working robot with build reports and more photos to follow the April 5th ship date.

With the mechanical design basically complete for the first pass – everything at least having a shape I can think about later if need be – it was fine to give the electronics a home. The typical electrical system for a bot like this is relatively simple, and components come in bite-sized modules that just need to be mounted to something in a vaguely robust manner. Rarely do you see fully custom PCBs or integrated controllers, unless the builders are electronics engineers by practice or hobby (an example is Dale’s bots).

OH2 is sort of a mix of the two cases; while I’m not using my own RageBridges due to the simple fact that they do not run brushless motors, the controllers I am running are extensively hacked and modified to serve in ground traction application (More on that soon, I promise!) But they’re still in their original cases, so my job is kind of easy – THROW THEM IN THERE WITH SOME VELCRO AND DOUBLE SIDED TAPE AND BE DONE WITH IT!

Nah, I think I ought to do just a little better. Since the functionality of the system is a known quantity from my testing with Sadbot, I was out to optimize the survivability and serviceability. Particularly, the goals of the electronics containment structure (hereafter nicknamed the e-deck) were:

Historically, when I’ve made an electronics enclosure at all in a project, it’s been a constructed (usually t-nut) box made of polycarbonate or some other plastic. So let’s start with what I know. First, here’s the layout and the space I have to work with. 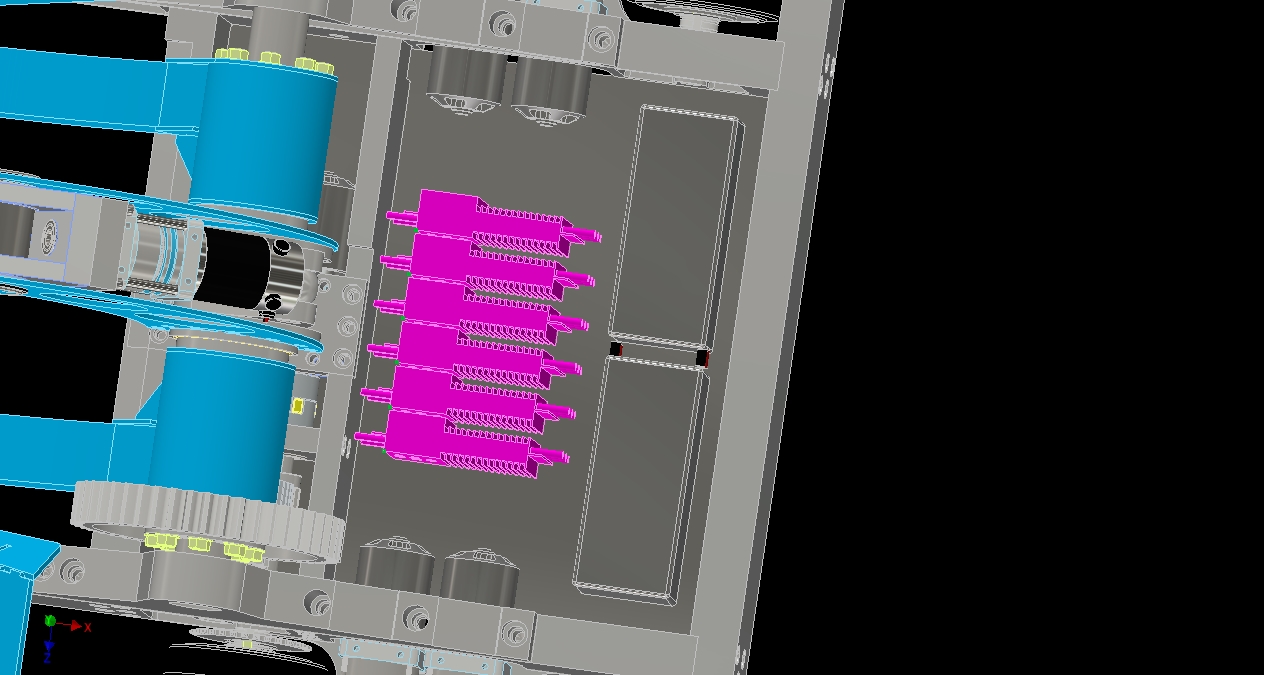 At the time of this design version, the Hobbyking Graphene batteries  had just arrived on the market, and I was eager to try them out. OH2 is not a bot which needs to pull hundreds or even thousands of amps in an instant like a kinetic energy weapon would do, and the new large-capacity Graphene packs (12AH and up) were highly attractive. I designed around the 12Ah 6S packs to begin with. They’re represented with external rough dimensions provided by the HK product page here, in gray. To their left is the final configuration of the DLUX 250A motor controllers after playing with exact spacing. 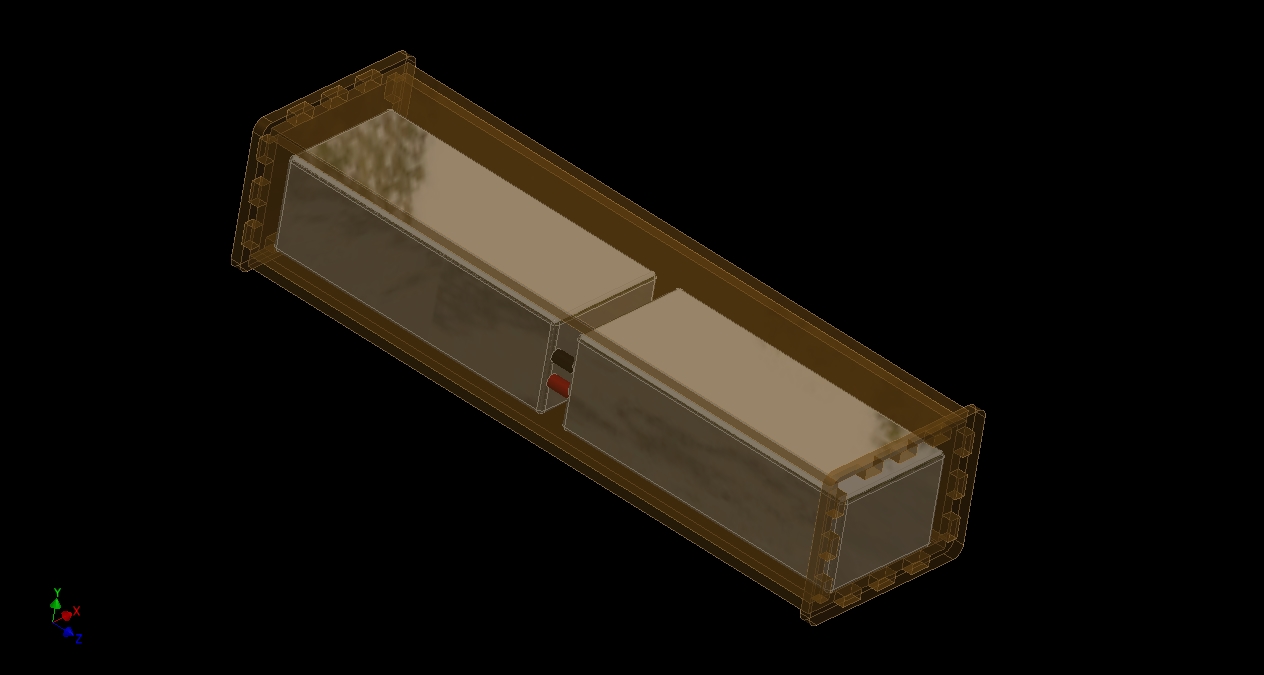 I decided to start with the “known known” and package the batteries up first. They were going to occupy the only large contiguous space in the back of the bot, which was originally designed to fit four of the Hobbyking Nano-Tech 8Ah packs that OH1 used. These are actually slightly shorter than two of those back-to-back, so I had a little more room to play with.  I made a “minimum dimensional enclosure that’s a clean fraction above the size of the packs”. The enclosure will be made of  1/4″ polycarbonate, likely waterjet-cut, with plenty of my special-sauce t-nut joints holding everything together. This part I’ve done dozens of times, so I left the geometry simple for the time being in order to move onto the rest of the system. 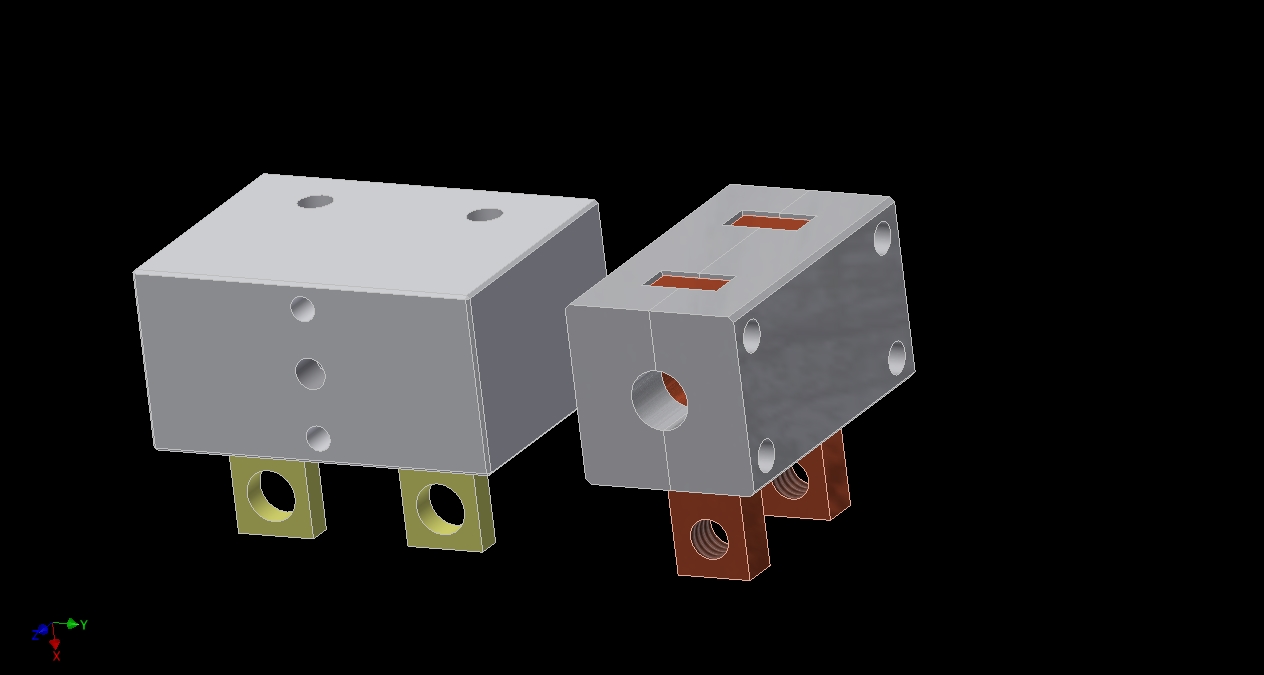 By this time, I had begun receiving lots of parts in the mail, and I began realizing something very distressing – that two Whyachi MS-02 switches were going to be too large to fit. The newest BattleBots rules now require you to have independently-switched weapon and drivetrain power systems. While I had submitted an application showing two Whyachi switches, actually trying to size them in the design showed me that this was mostly ‘last minute homework question’ and practical. Essentially, yes I could fit two MS2 switches, but I would prefer not to.

So naturally, in keeping with the trend for this bot – I designed me own. Gee, can you make touching two wires together scientifically any more complex? Yes, I can. 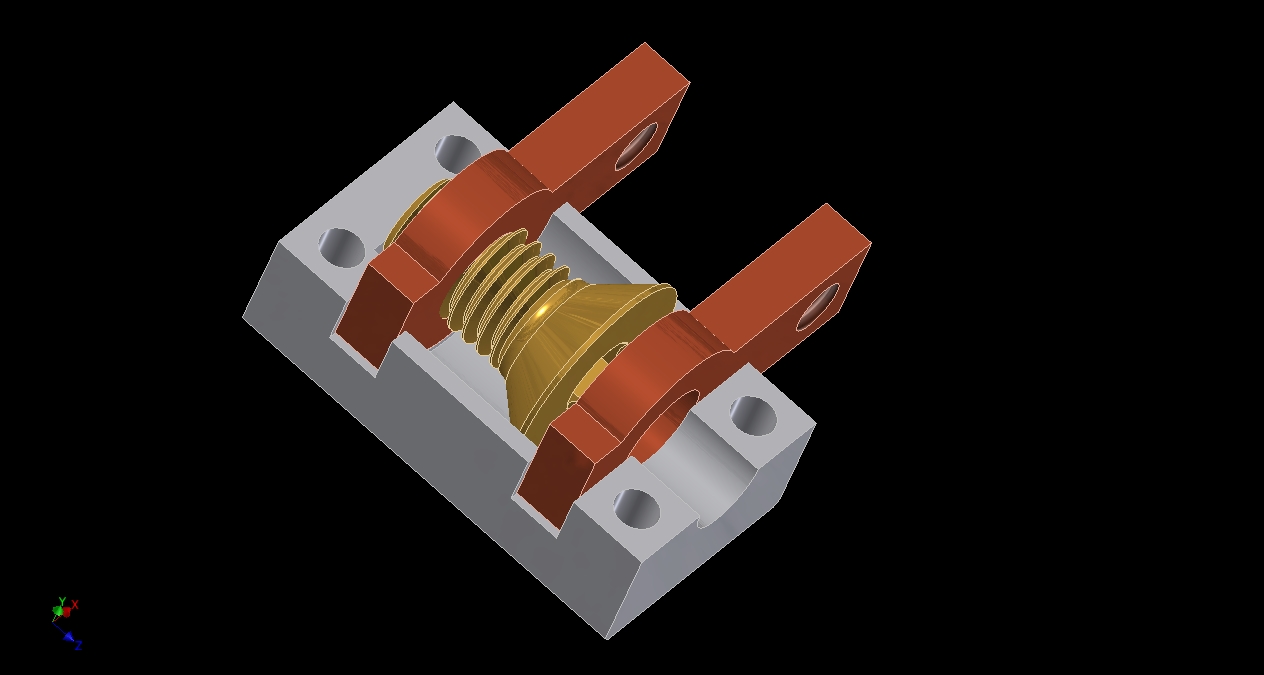 Here’s what’s going on inside that block of nondescript 3D modeling clay. Hint: It’s not much. It’s literally a gigantic Fingertech switch. I designed it such that the square area of the face of the switch (where you crank the contact) is half the size of a Whyachi MS-2, so I could fit two side by side in the space of one MS2. It goes “back” further, but I had that dimension more available.

I didn’t want to get fancy with the contact method, so Fingerth-style “tightening two conductive things onto each other” was the way to go. The terminals are 1/4″ thick copper, and the contact is a 1/2″-13 brass socket head screw. Brass isn’t as conductive as copper, but sheer area makes up for it here – the cross sectional equivalent is a 6 gauge copper wire.

That is revision 1 you see up there. Come build time, I’ll show some updates to this design that make it more refined and less terrifying to use, with the possibility of it being a future Equals Zero product. For now, once again, the shape is set and I can stop thinking about it for a little while. 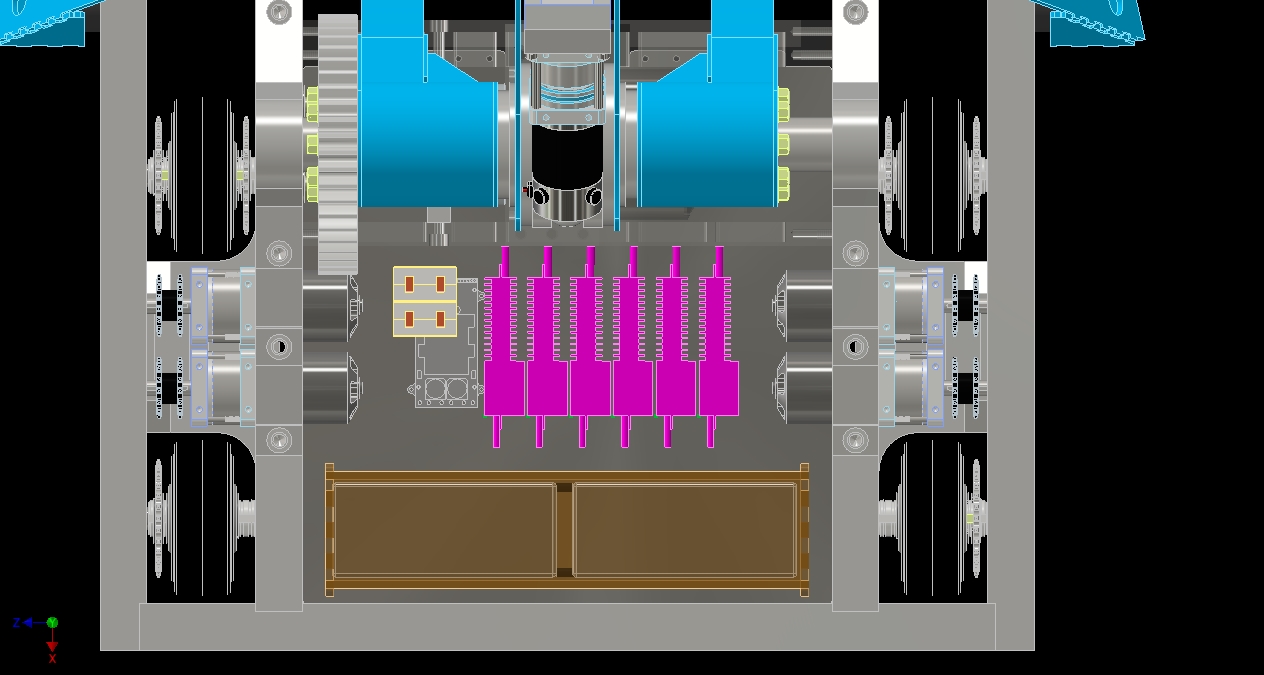 I’m playing the layout game a little more here, having added a RageBridge 2 to the equation. Instead of “rack mounting” like I am going to do with the DLUX controllers, I decided to lay it flat. The reason behind this was that Rage2 is rather short (heightwise, from the heat sink plate) compared to everything else, and I needed the same area to also be occupied by the switches. If the Rage were also vertical, I’d have needed to push everything sideways, right up to the width between the motors. Leaving some breathing space in a big bot is good for serviceability, the fact that I didn’t want to optimize the design into a corner right away notwithstanding. 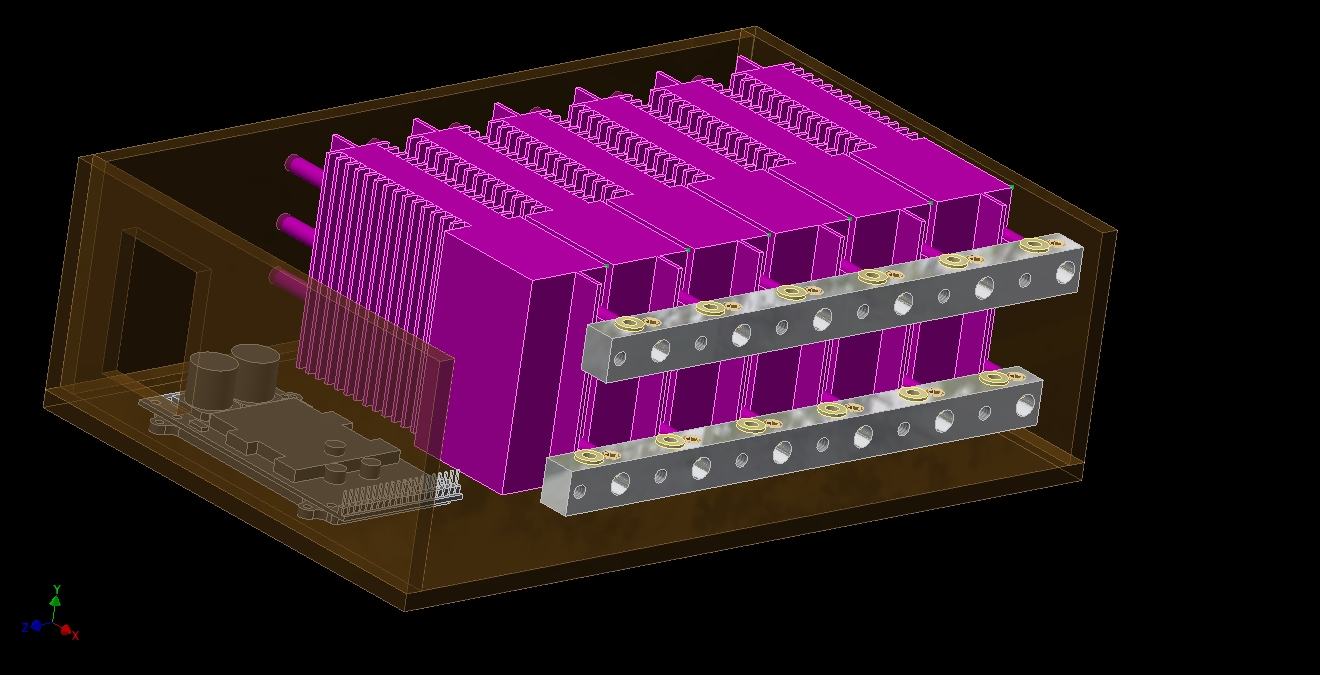 I began generating an ESC box in the same manner as the battery box. Check out those big bus rails – that’s how power distribution will be handled. While thinking of ways of avoiding a gigantic tree-root of wires splitting off into smaller wires, I was reminded of the existence of bus bar products after digging through my wiring parts bin and finding some car audio power distribution blocks.

However, most industrial bus bars look like this, which requires putting ring terminals on the controllers. While not the end of the world, I usually prefer the direct wire contact style of the audio distribution blocks. There’s also busbars which look like this, more commonly called ground bars, in the audio power distribution block style. I started shopping around for them, before the realization that they are simply blocks of metal with set screw holes tapped into them hit me.

Well, fine then. Not like I wasn’t going full hipster on everything else electrical already, right? After doing a bit of research on bus bar manufacture, I decided to get some alloy 6101 aluminum from McMaster-Carr and just drill and tap some holes into them. 6101 is the most conductive aluminum alloy in common use for electrical appliances. Aluminum has less conductivity than copper, but you make up for it using more. The equivalent cross section of the bars I modeled is 6 gauge copper wire at the minimum.

The bus bars are offset horizontally from each other by about 1/2″. With another set of holes oriented vertically, it means I can stick a hex wrench through a hole in the top one and land it in the set screw socket of the bottom one. To prevent accidental crowbarring of the circuit (nevermind the fact that the whole bot’s going to be turned off, battery disconnected, and most likely this whole electronics deck removed from the frame when I work on it), the screw access holes will be given little nylon bushings to insulate a passing tool. 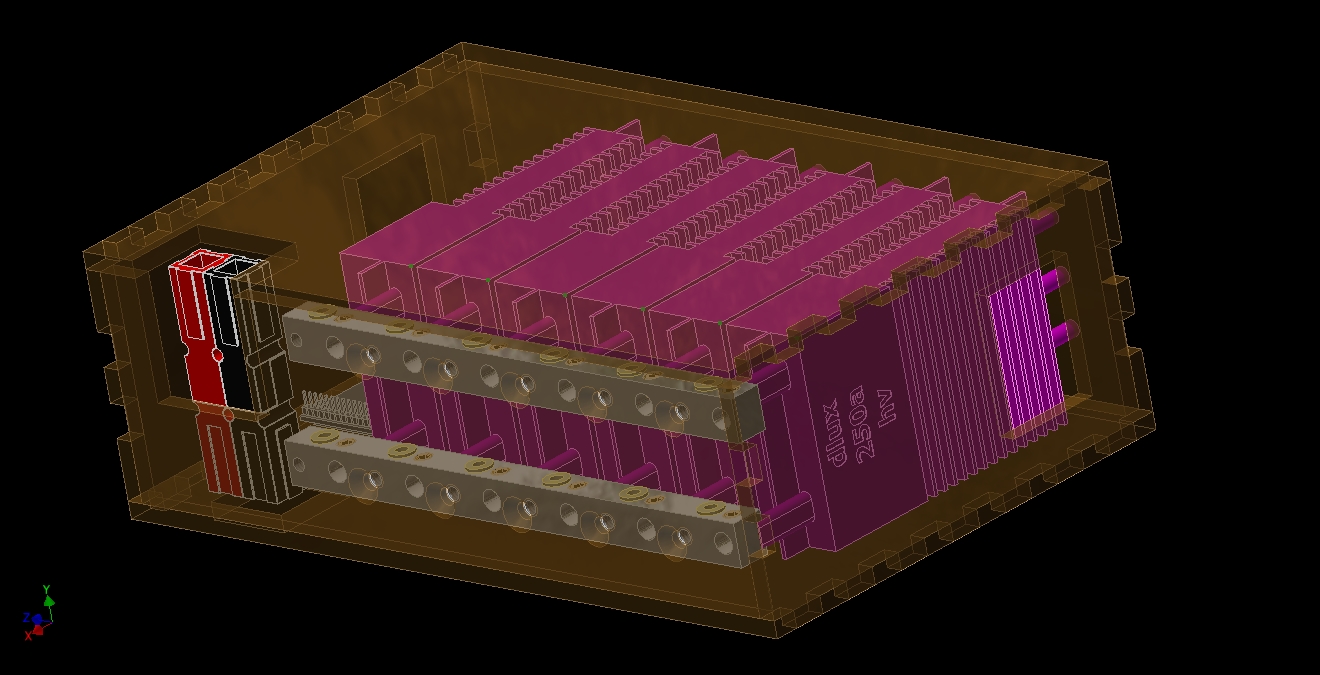 Moving on from generating the crude rectangular-box housing to stitching the edges together in my usual style.

Shown also are Anderson 75 amp Powerpoles. It’s a well known fact in the robot world that the 75A Powerpoles are actually capable of substantially more than 75A in bursts. Since I’m not a giant spinning weapon, I needed something which was more substantial than an XT or Deans connector, but to size an actual industrial connector to my load “like 200 or so amps” would make OH2 just one big connector. I brought in two pairs of them to check on the available height for mounting.

In a way, I’m counting on running extremely high voltages to avoid using high current to push power (the alternative being a low voltage system like 18-24v and like all the amps ever). 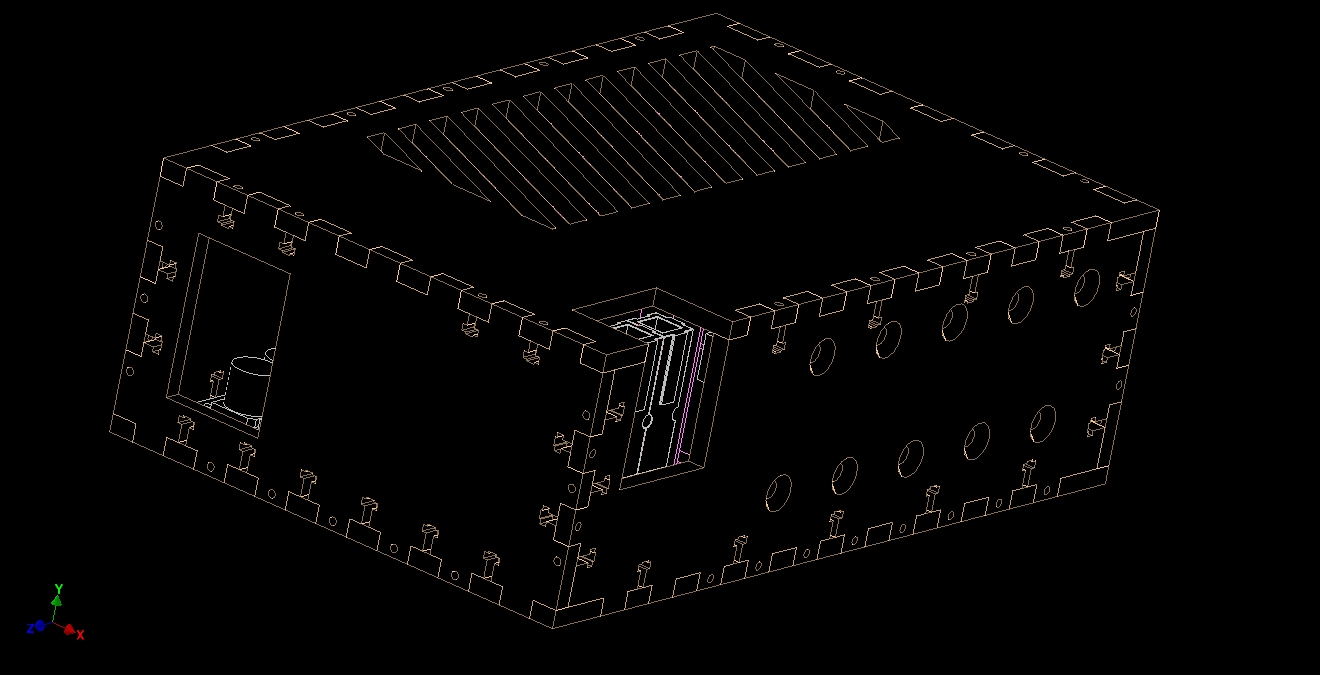 It began being easier to look at in dark wireframe mode – basically Shaded with no shade. Wireframe was too messy, and the transparency of modeling in polycarbonate with default looks meant it was still hard to see the edges. Above, I’ve added the slots for the #4-40 t-nuts. 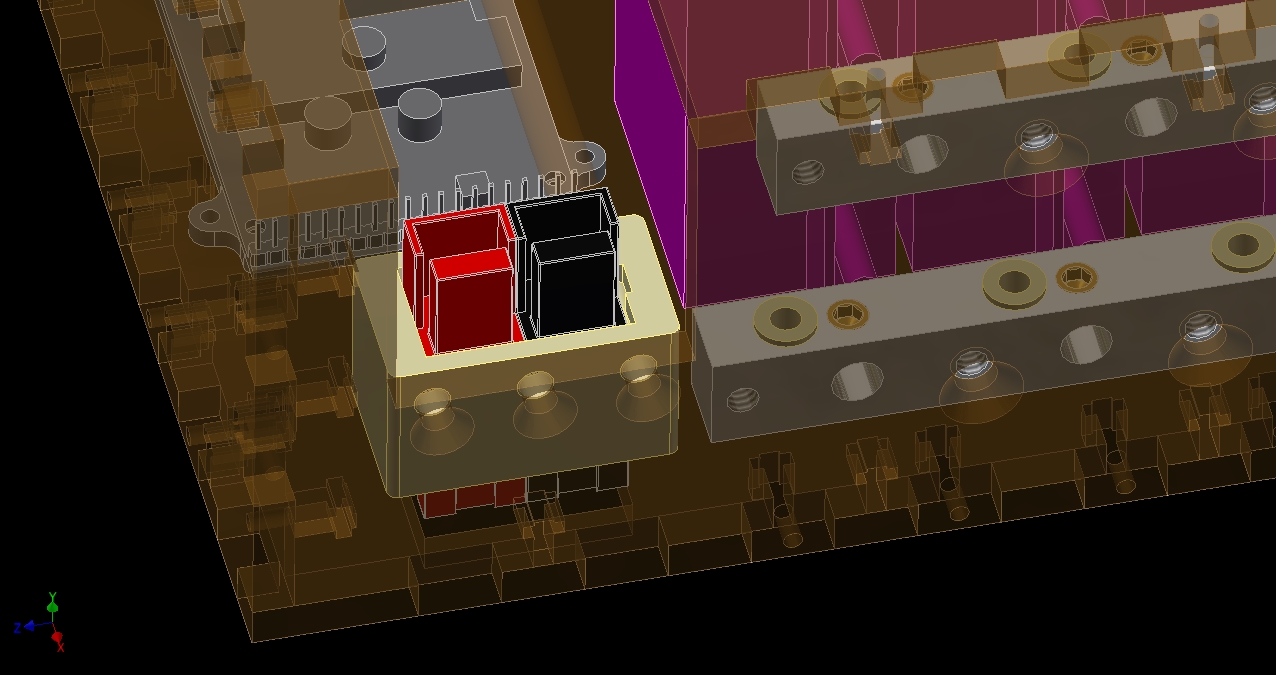 I toyed with the idea of a backplane connector style of battery attachment, where the Powerpoles are mounted to the polycarbonate enclosures, and the whole assembly kind of snaps together and gets bolted in place. I even modeled a 180-degree rotatable Anderson Powerpole mount to do this, seen above.

However, the more I thought about it, the more I wanted electrical connections to be as compliant as possible, not hard-mounted. So, the bot-side electronics enclosure will get this Powerpole mount, but the battery itself will just have a loose connector pigtail. 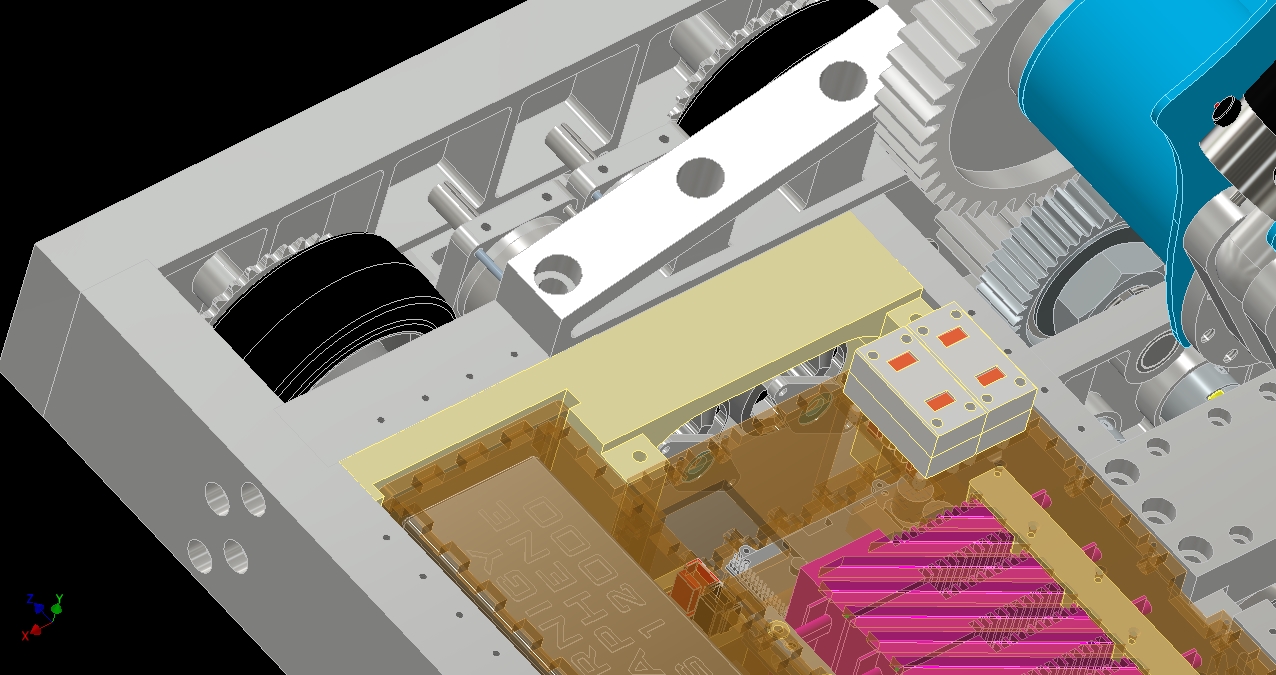 After establishing how big the enclosures were, it was time to flow a bracket around them to hold them in place. This had potential to be the largest part ever printed on a Markforged machine yet, so I was highly tempted.

The premise of this universal bracket was to contain the enclosures using massive areal contact of something mildly compliant (nylon), and also to presenting vertical bolting features to further restrain horizontal planar movement as well as vertical movement.

It also acts an air guide shroud for the drive motors. At this point, I’d been thinking of ways to do forced-air cooling of the whole system, and the holes & vents in the electrical deck were created with that in mind. I was planning on having a central fan somewhere – likely in the empty space to the right of the lift motors and having it pull air through the bot. 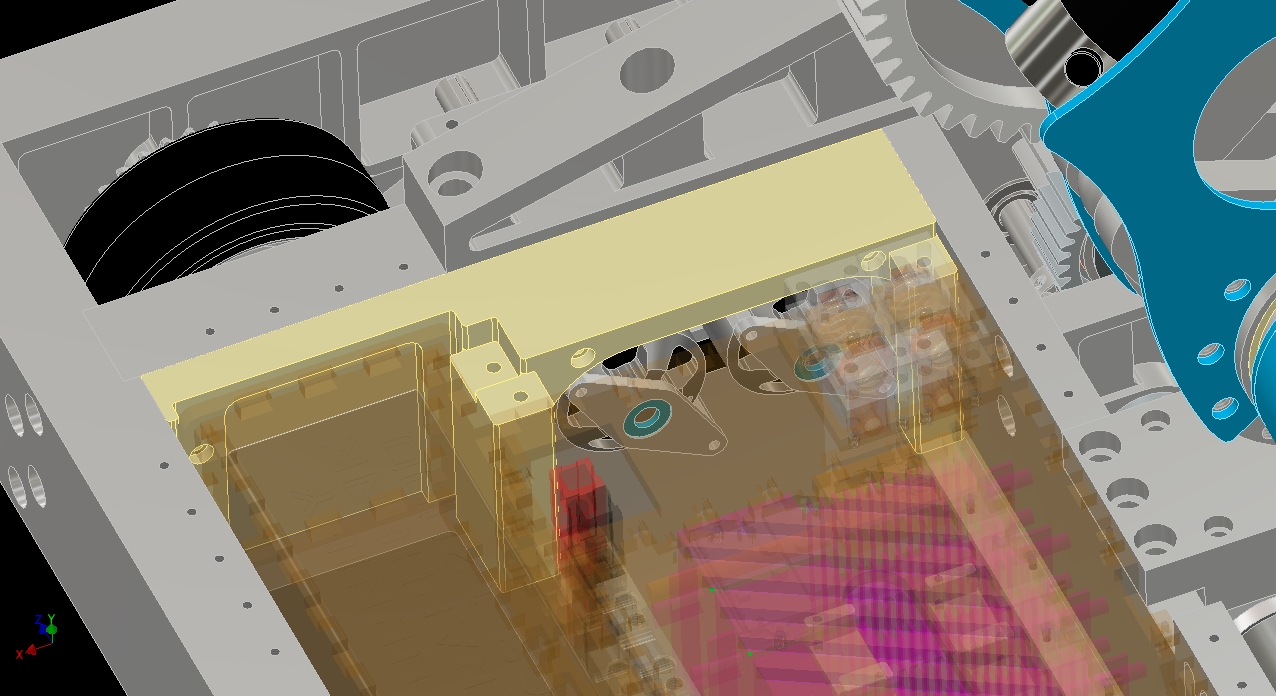 Here is the completed Everything Bracket, with its own mounting features.

I’m now at a point where the whole design is basically “first-pass complete”, meaning I know where everything goes and what it should do, even though it might not be well thought out or optimized. I find that this point is a very helpful one to reach, because the changes you’ll make to the design tend to be evolutionary instead of revolutionary (scrap it and start over). Not to say I haven’t done the latter, but…

In the next episode, I’ll introduce some of the very last CAD kibbles before the real fun starts – the build reports!

One thought on “The Overhaul 2 Design & Build Series, Part 6: Electronica”