The semesterly action has died down to the extent that I no longer know what to do with myself. This is the gap of three-odd weeks between the end of the spring semester and the beginning of the summer action. As usual, the IDC is hosting mobs of Singaporean students as well as MIT students involved in The Collaboration. Like last year, I’m about to indoctrinate a fair percentage of their current freshman class with the Church of Chibikart. The specific implementations of this summer’s Silly Go-Kart Church Camp will be discussed soon. There are omniwheels.

During this break, I am of course going to be working my various problem children who need my attention. Most of this will involve facilities upgrades and improvements of the current robot or silly go-kart fleet.

Truth be told, I’ve actually been spending most of the past week, and likely much of the coming weeks, designing something which I think is gonna be pretty damn interesting. This is a far out enough concept that I want to flesh it out concretely before taking it public, so you’ll have to deal with this artificial cliffhanger for a bit longer.

In between, Chibi-Mikuvan has been accruing more stickers. It is a well known principle in auto racing that stickers make you faster!

Well, perhaps a different type of sticker. They most likely didn’t mean…. 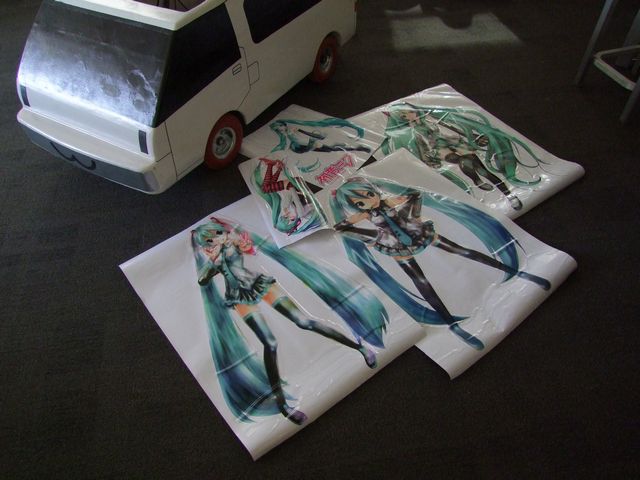 It’s amazing the huge range of quality you are presented with when you search for “miku sticker”. I gradually homed in on one sticker/decal house with an eBay store, based in Malaysia, that had the highest count and variety of Miku stickers. The characteristic I was seeking the most, though, was huge. Loads of stores had the tiny notebook sticker or cell phone decal, but only this place had them in 33″ tall, and in high quality with the transfer layer.

Granted, the shell isn’t that tall, so some parts of Miku will necessarily be lost. I decided this was fine, though, as most itasha decor seems to focus on making the most recognizable parts of the character as large as possible (I need LED rims). I think for this version I’ll spare the fully custom paint job – it’ll be stickers on white to start with.

What followed was days of arduous experimental Miku-placement, researching and answering the toughest of unresolved issues in this field such as “Is it tacky to have more than one Miku per side?” (The above example would indicate no, it isn’t). 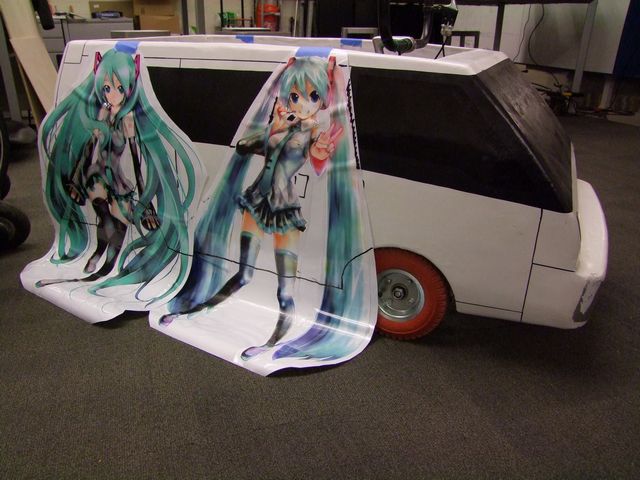 Dry erase marker and masking tape was the layout method of choice. I scribbled roughly where body lines were going to go in order to come upon a satisfactory placement. 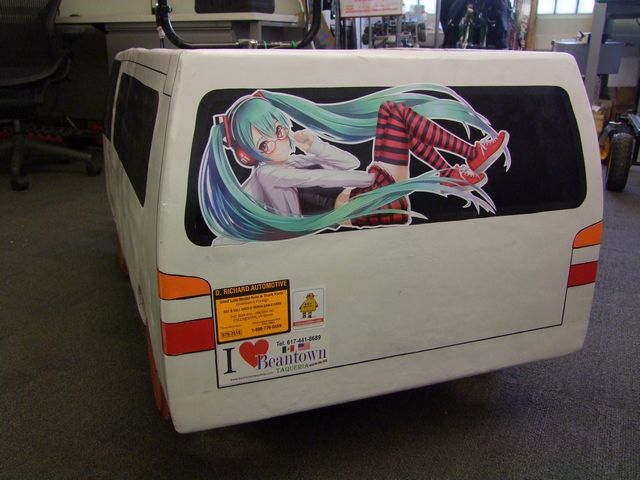 This one, at least, was fairly obvious. It was of the exact correct height and aspect ratio to take a ride in the rear window impression. 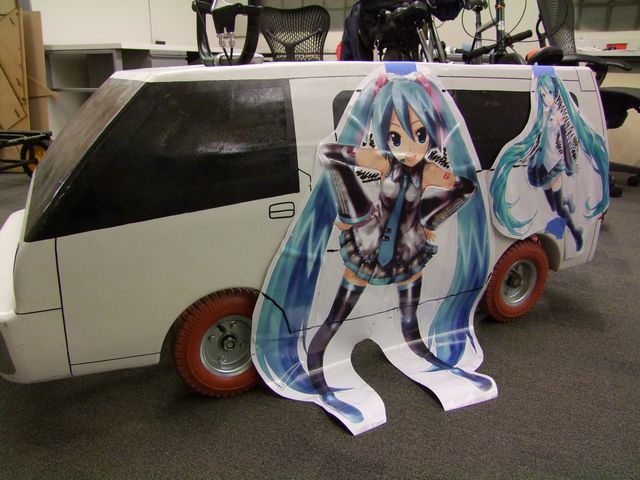 And on the left side.

I was conflicted on whether to use only the two largest ones, or also include the others. The two in question are of the same art style and by the same artist (KEI), giving a more cohesive look, but of course had poor coverage. The two art styles shown here definitely clash a little. 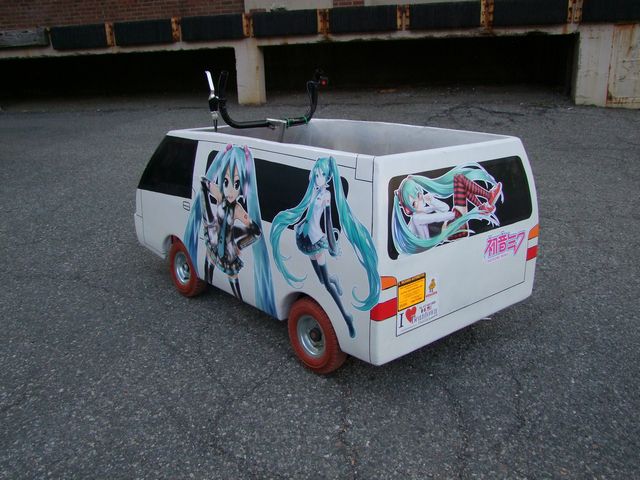 After placement was finalized, I rough-trimmed the stickers to shape, applied them, then very carefully precision-trimmed the bottoms with a craft knife. In all, the results were quite good.

I actually ordered another pack of stickers – this time, with more logos and banners (the single lone Hatsune Miku logo wasn’t enough!). They should arrive soon. 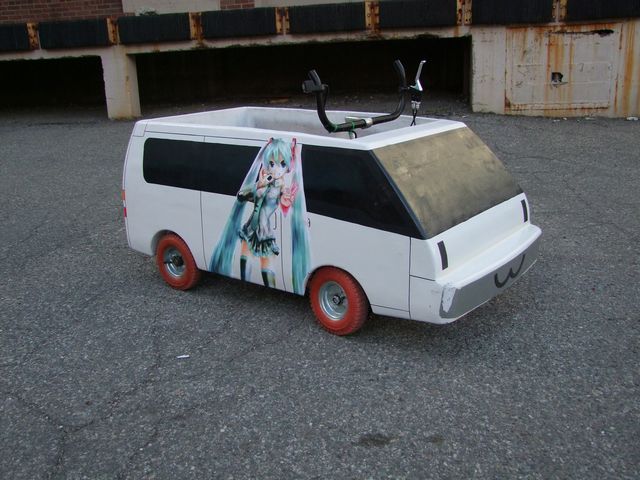 The right side, for now, will lay a little more bare. Maybe all the new ones will go on this side! 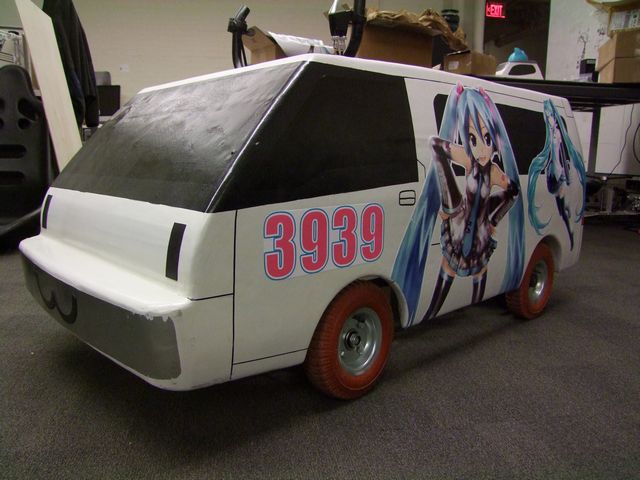 I moved onto the issue of car number. The two numbers traditionally associated with Miku – “01” and “39”, are both taken already! Sadness. Well, I’m certainly not going to try and claim the 01 number from the team until I beat them.

The door decals were printed on sticker vinyl by my good buddy Ted, who knows graphic things and stuff and whatever. I tried printing them, but my poor CMYK only printer can’t handle the BRIGHT NEON MAN-GENTA coloration of Miku’s graphic logo (the 初音ミク bit) – it kept coming out orange-red. Apparently, professional printers just have a BRIGHT NEON MAN-GENTA color channel. The lettering itself was made using Inkscape.

I carefully knifed the number out by hand (and ruler) – no cut templates were made. I supposed I could have fed this into the vinyl cutter if I had planned this better. In ambient room lighting, it looks tacky because the background stands out, but in bright outdoor light, it’s not as noticeable.

Little known fact: For one reason or another, after the previous garaging video, the Trackstar 200A controller died. It didn’t die in flames – rather, one phase simply stopped driving. So in fact I could ‘skateboard’ Chibi-Mikuvan up to 5-6mph, hop in, and it would actually still keep on driving. However, with a dead phase, it couldn’t start or run at low speeds. Inertia! It works!

Having one of the student teams this past spring suffer a Trackstar failure in almost exactly the same fashion, I began to suspect that the up and down jostling and high frequency impacts of being used in a vehicle was causing the signal board to come loose inside. As documented in One Thousand and One Hobbyking Amps, the signal board on these things is held on by 1 small header, and allegedly retained by rubber foam tape. However, when I pulled that unit apart, the board came off really easily, with not much compression of the foam tape visible.

It’s my hunch that impacts shake the signal board header loose just enough to cause one bank of FETs to possibly become disconnected from the driver chips, and since the power board doesn’t appear to have any gate protection hardware (pulldown resistors and Zener diodes), that phase probably died instantly from cross-conduction or dV/dt damage to the gates.

I decided that the power board was not worth saving for a few reasons. First, it’s a massively heavy (6 ounce or heavier) board with copper conductor bars soldered to it – rework would have been borderline impossible. Second, it’s potted for waterproofing, as far as I can tell. The FETs are sandwiched right next to the conductor bars.

Hence, I gave in and just ordered a replacement. Damn you, Hobbyking! 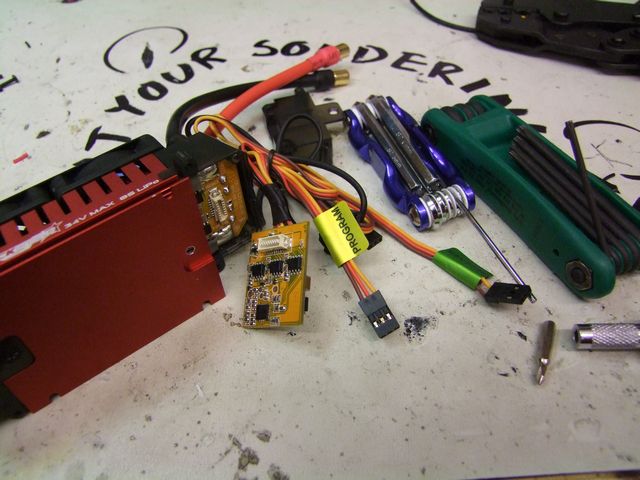 This time, the first thing I did was to crack it open. Shown on the right is the number of tools I needed to use to do this. I have no clue what the hell these screws are supposed to be, but some prefer a 2mm hex, some a T9 (!?) Torx, and two of them Phillips. 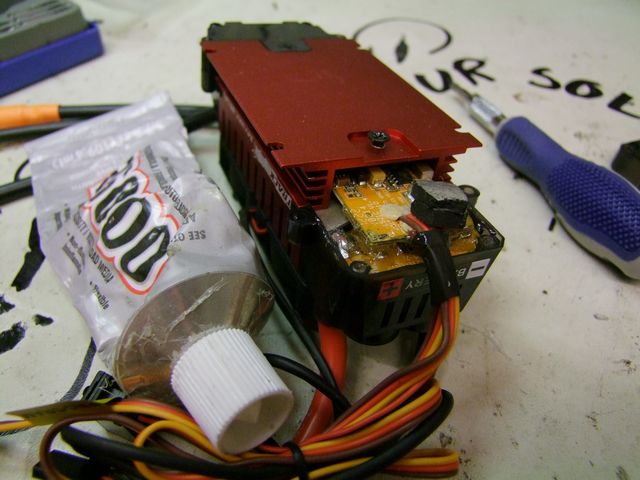 Next, I took out my favorite contact cement & robot wheel retread compound & waterproofing coating & what have you. E6000, and its related adhesive Goop, are some of my favorite adhesives. In this case, I’m using it far more as a structural filler. I put 3 big globs of it on the near two corners and far edge of the board.

I’m basically resigning this controller to be never repaired, but that’s fine.

After replacing the controller, I joined in another MITERS silly vehicle proving session in the garage. This time, I couldn’t get the dashcam to stick to the helmet any more, so had to rely exclusively on random people filming, which always ends so well. The art and science of holding a camera steady is one that is only developed through a habit of documentation – most people can’t do it. This is all the useful video I was able to get that wasn’t jittery, out of focus, or cut too short.

That sound at 0:16 which is oddly reminiscent of a gear falling out of a gearbox is…. yeah. Under heavy motor braking, once again the pinion got yanked off its taper by the action of the helical bevel gear. It proceeded to screw itself back in once I hit the throttle really hard. I need to remake that entire input shaft at this point, since it’s doubtlessly been gouged up and damaged by the slipping gear. I’m also going to reduce the maximum motor braking force back down to 25% – I left it at 50% for this test – for actual racing, since it seems to be a point of reliability trouble.

This run, I beat my previous time (57 seconds) by 2 seconds since I carried more speed through the end turns. I’ve figured out how to get this thing to not understeer near top speed – the answer is lean all the way forward. I believe this puts me within 2 seconds of the all-time garage record by Tinykart.

Left to do on Chibi-Mikuvan is making the water cooling circuit, for which I have all the parts for already. The next thing to do after that is to make spare everythings: battery packs and entire motor-gearbox assemblies are first. This way, if I have a motor or gearbox failure during the race, it’s easy to swap and get going again. Eventually, I want to set up the 2.00gokart course again and run one full simulated race scenario – as many laps as possible on one battery, a battery change, and a tire change.

I’ve signed up for the Detroit Maker Faire race, which is a feasible one to get to, so shit will get real soon!

One thought on “Chibi-Mikuvan: More Stickers is More Power, Right?”