Another spectacular season of 2.00gokart has been produced! This time, instead of holding the garage challenge like I have done in the past, I decided to reuse the “road course” that our group put together for the summer SUTD visiting students. Why?

As awesome and science-filled the garaging is, it’s kind of boring. It’s a great theory-to-reality comparison: the mostly-straight course (Let’s face it, 100 foot turn circles for a go-kart is basically just bad toe trim), is all uphill at the same grade the whole way, and of consistent traction characteristics. It’s easily analyzable by relatively simple first order estimates of gravity, rolling resistance, air drag, and drivetrain loss.

But its downsides are also many: there’s no line of sight from one garage level to the next, so we had to use a network of 2-way radios. The narrow concrete-lined end turns required padding or shielding to satisfy the safety office and make sure students don’t actually wham themselves (these two goals are mostly divergent). And of course, to collect the best data, only one team goes at a time, so there’s no head-to-head element, and a lot of waiting.

I  put together the road course idea because the summer students weren’t really in it for grade or explicitly to learn some engineering curriculum. Since that artificial carrot was gone, I figured that the final competition should be a lot more fun-oriented, and what’s more fun that running your peers over with a go-kart you build yourself?

This isn’t to say that science isn’t possible to do, since the Energy * Time metric works for any type of motion with two endpoints. It’s just that for a road type course it’s harder to predict without going into more advanced modeling of friction/scrubbing during turns, the impact of speed variations, and the like. For the summer, we did collect energy * time numbers, and it did provide practical insight into subjects like why two karts of basically the same powertrain layout could have drastically different scores.

With that said, here’s the media trail from just before the infamous “Milestone 7” rolling-frame inspection, through the semester to the competition itself, ending with the compilation video for this year. 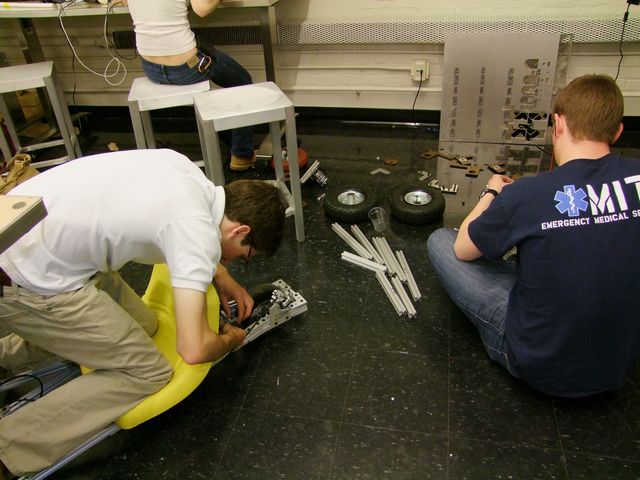 As the inspection approaches, it’s customary for students to find any open nook or corner to work on their vehicles. Usually it’s exactly where the vehicle died or some part fell off. 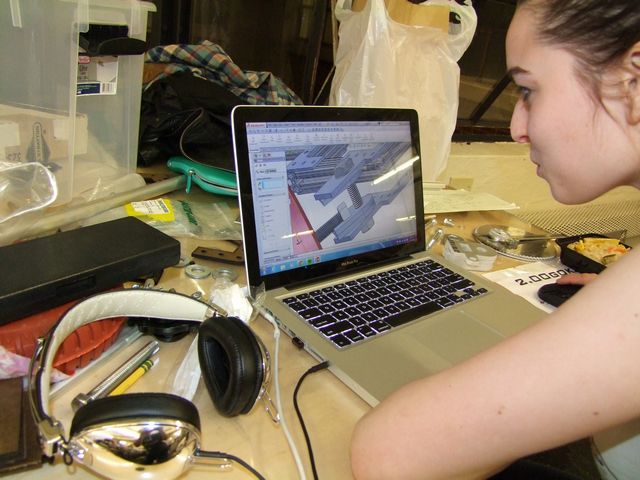 A common setup in the few days leading up: Food, drinks, headphones, Solidworks, and intent staring. 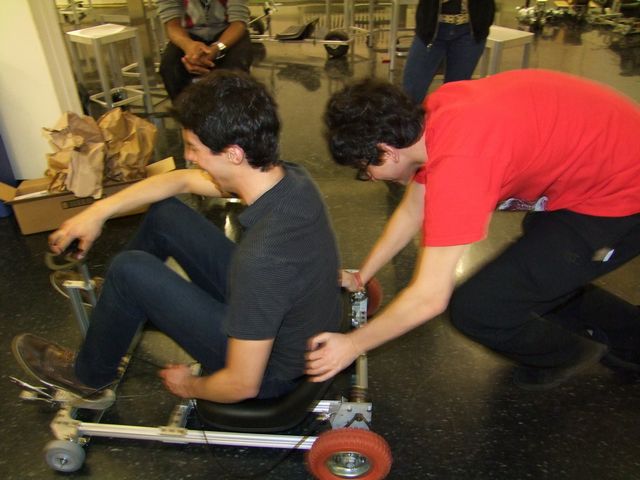 The inspection itself constituted a visual overview to check that your frame is rigid, your bolts are tight, and so on.

And, of course, the brake test. Your teammate pushes you to a brisk jogging speed, then you mash the brakes. My measure for passing is if the braking wheel could lock up – that indicates, at the least, that the vehicle’s available braking force exceeds its available traction. Karts with short wheelbases and rear brakes would of course excel at this test, albeit at the cost of actually being able to stop well in real life. 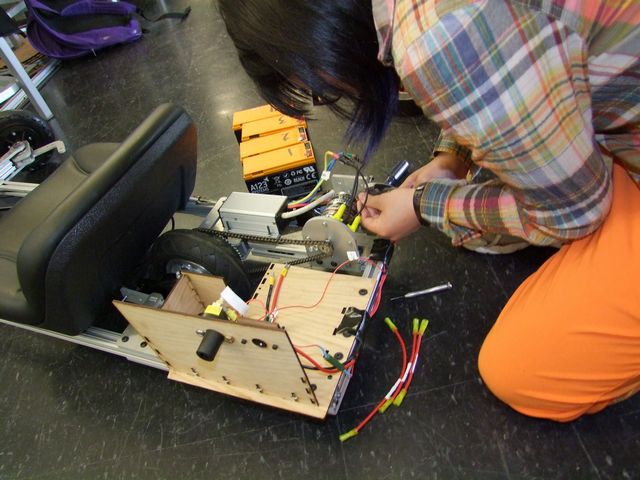 After Milestone 7, the teams have three weeks until their kart has to be done done (not just done, but like, done-done!). Good luck with that, Google Translate.

The last 3-4 weeks of the class are generally reserved for electrical work. I issue batteries once students put together their electrical systems and I or one of the TAs look over it real quick to make sure they aren’t immediately plugging it all in backwards. Later on is okay, of course. 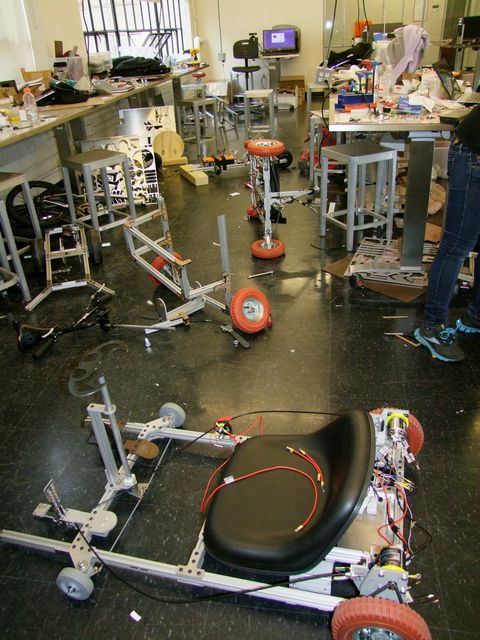 In the final week, the shop enters tornado disaster mode. 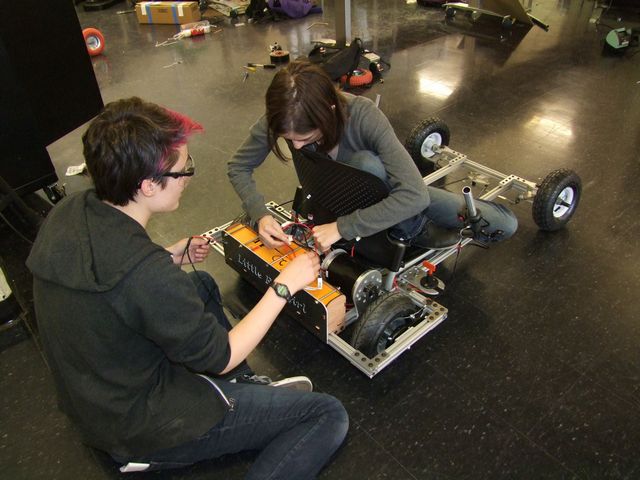 Electrical system testing and debugging was some times performed live.

By which I mean, actually with live systems. I tried to discourage this practice, of course, but with no moral authority to stand on…. 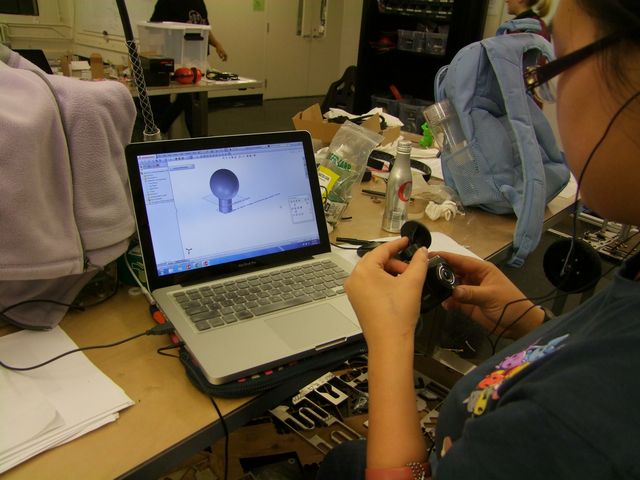 One thing I wanted to experiment with this year was getting onboard video from the karts. This was something I hadn’t had time to think about before, since the class before this point hasn’t been streamlined enough to “run itself” (so to speak). I investigated a few options, from GoPros to Sony Actioncams and the like, even the odd wireless webcam. I was looking for a combination of small  and unobtrusive, inexpensive (so that basically took out GoPros), and streaming video if possible. After some consideration, I remembered that there was a burgeoning market for no-frills small cameras that stuck to something and recorded: Cheap Chinese dashcams.

I only know them because I watch too many Russian dashcam videos. I honestly believe it should be a compulsory element of drivers’ education here, but Americans are probably too squeamish for that. Anyways, these Chinese dashcams offer a wide array of features – some have GPS, automatic G-sensor based file saving to capture the fucker hitting you while parked, voice and motion activation, etc.

All of those features aside, what you get is a relatively inexpensive ($100 or less covers it) camera that can record HD video and is easily portable, and that you won’t miss if it gets run over. I decided to forego streaming video for the ability to have many of them: By this time, I’d already worn down the class budget to a little stub.

Reading a little on dashcamtalk, I decided to go for the latest on the market: The GT680W. It’s resold under a couple of brand names in the U.S., but all of them talk to you in Engrish when you boot them up, as far as I can tell.

My only gripe with the GT680W ended up being its very short battery life. It has a very (very) small internal battery that’s only good for maybe 10-15 minutes of recording outside of a power supply. I’m guessing this was an acceptable compromise for a dashcam because most of the time it would be powered off the car’s 12V rail, and the job of the battery is just to close the video file when the power is turned off.

I provided a ball mount template to the students so they could devise their own creative mounting brackets for the camera’s stock ball and socket mount, which is seen above. Since they’re designed to hang from windshields, the ball mount it comes with doesn’t point back far enough to be used on a level surface.

Lots of dashcam footage was collected during the race, and some of it cam be seen in the highlights video! 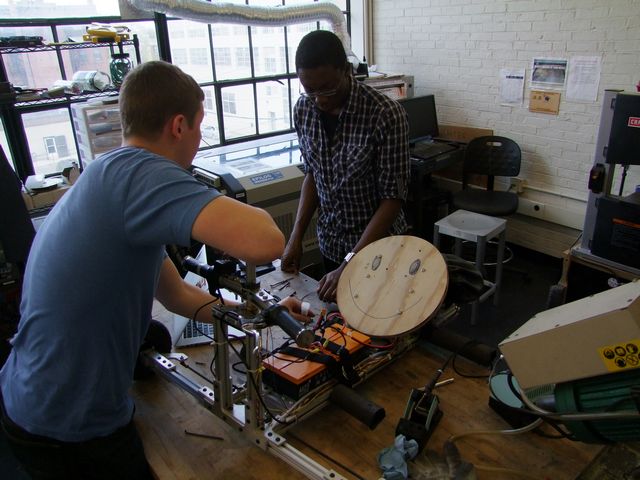 As final inspection day approached, students began scrambling to finish important aspects of their vehicles such as the gaudy lighting and themed decorations. 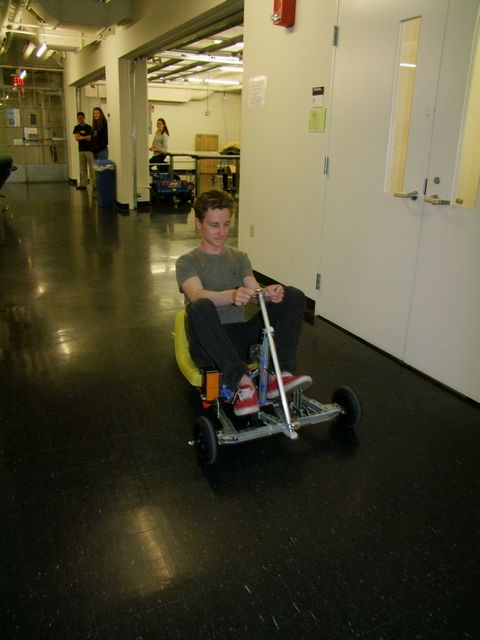 During the week of final inspections, I set up a makeshift track around the conveniently looped shaped third floor of the building, mostly by setting traffic cones out and warning people working in the research labs that they need to yield before merging into the hallway. This was more or less when people started discovering that they should have listened to me when I warned them against chain drives…

The next thing everyone knew… 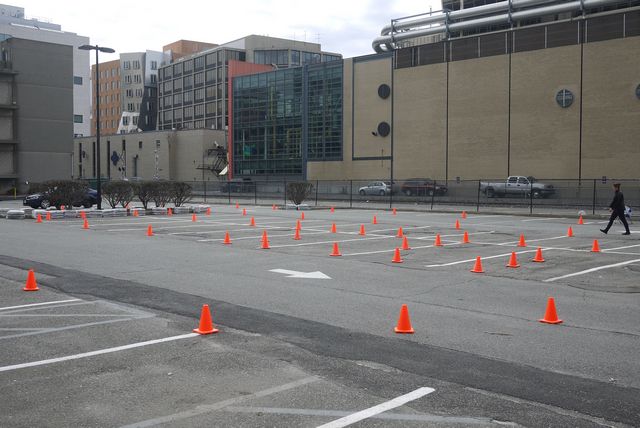 …it was race day! The track was set up the night before by myself and a few cohorts, so all we had to do in the morning was run power to the parking lot and set up the start and finish. All  of the pictures from here on are courtesy of shewu and Dane.

Being next to a power plant and all, you’d expect there would be easily-accessible outlets everywhere. No such thing – our only source of power for tools and charging came from a 150 foot extension cord run from like halfway inside the plant. I in fact had to walk around with a plant staffer for a minute before we even found one. Last summer, I used one that was much closer to the door, but this time when we tried, the circuit was clearly turned off, and the staffer was not an electrician, so he didn’t know where the circuit breaker for that one was. 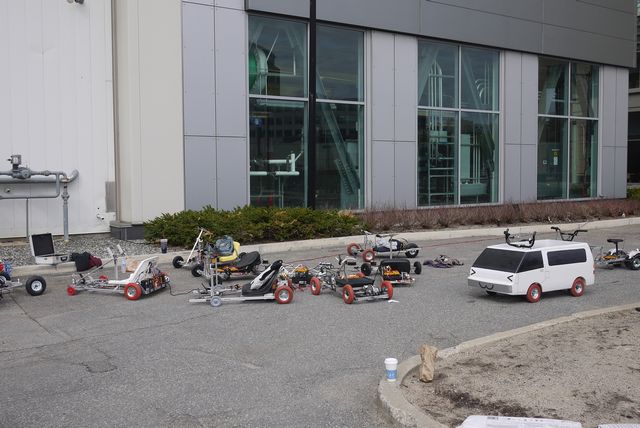 A morning shot before we began at 9am and before this area became a total disaster too. 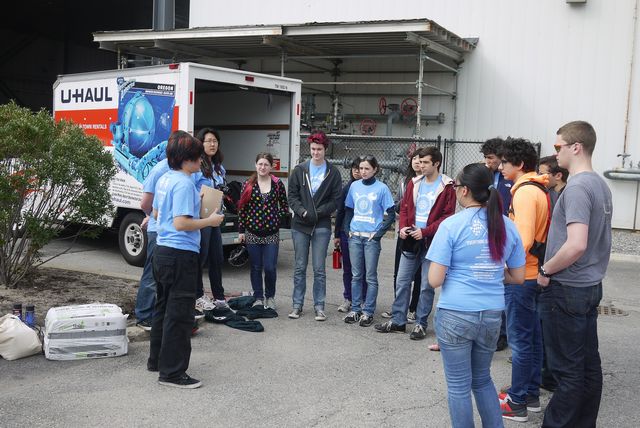 Driver’s meeting! I go over the track layout, the competition format, and various logistical issues such as the nearest class 1 trauma center. 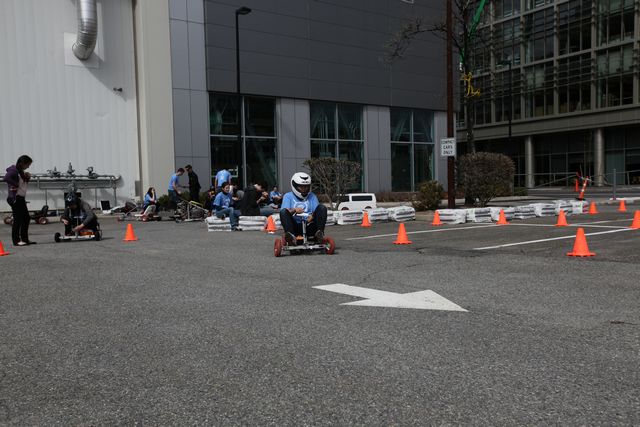 At 9AM, runs begin with individual driver time trials – quite similar to Autocross. We rigged the karts with Wattmeters as per the usual procedure, so people could record their energy usage. Each driver got two practice laps and three scored laps. 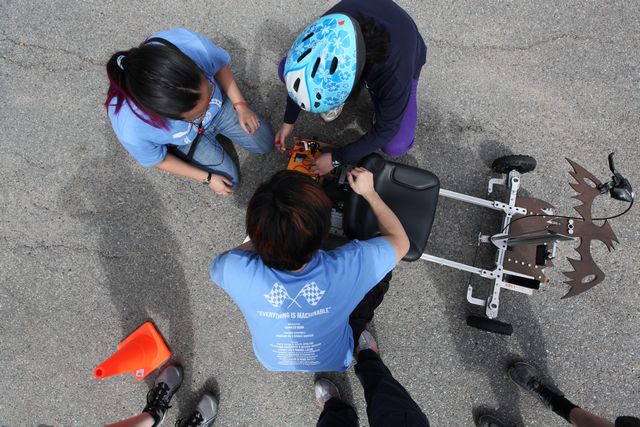 Some live debugging going on. This team has a build blog! It needs updating! Hint, hint. 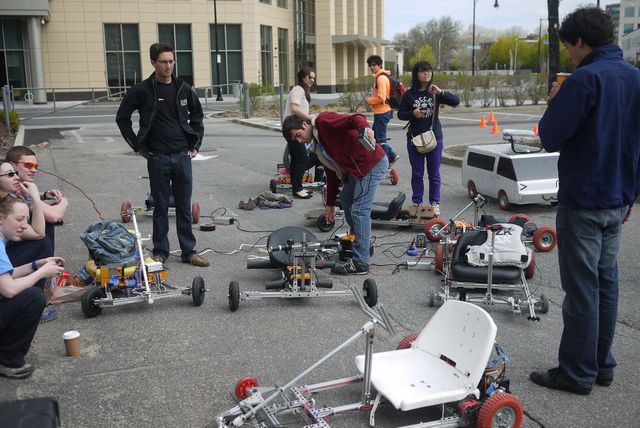 By midmorning, the pit area has become a tangle of power supplies, chargers, and soldering iron cords. 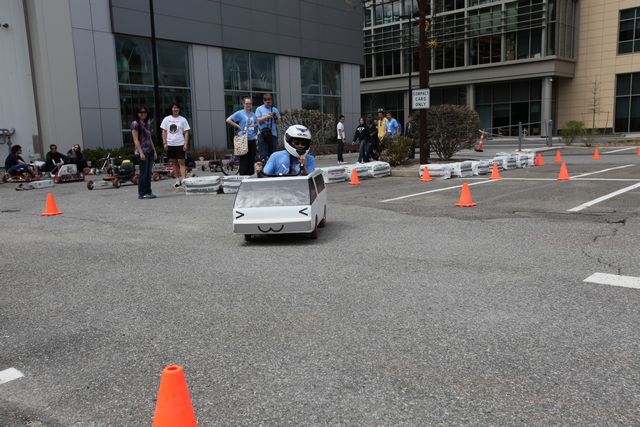 During the lunch break downtime & recharging time, I took a stab at my own course with Chibi-Mikuvan!

Having about 3 times the available motor power of my students, I of course, took the best lap time at 20.7 seconds. The quickest student team was 25.6 seconds. This is clearly indicative of my years of experience and accumulated skills. 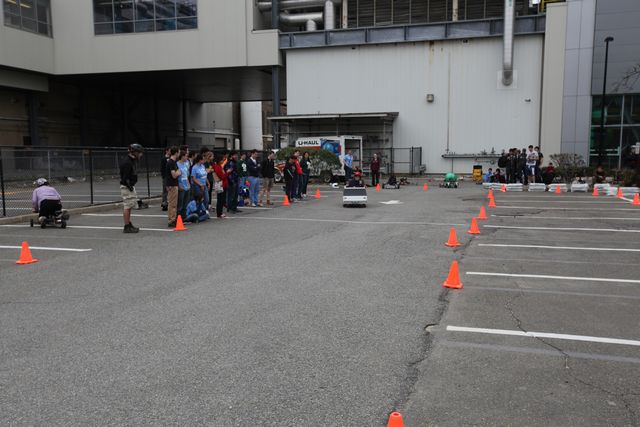 Chibi-Mikuvan catching a dab of oppo. I’ve now realized that it’s entirely possible on dry ground if I keep my weight forward a little (i.e. hang off the handlebars a little). 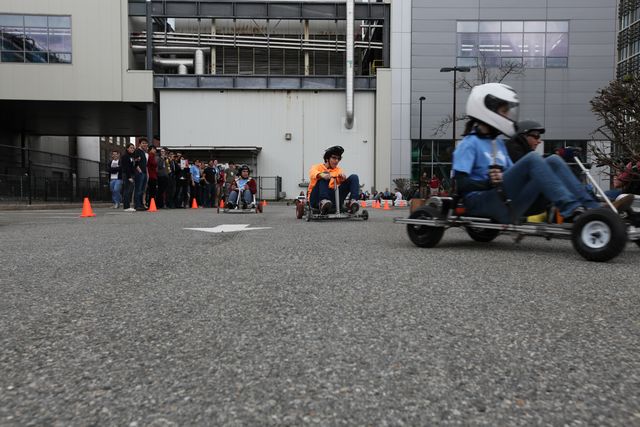 After the individual runs were finished, we entered Anarchy Hour, with multiple head-to-head races. Whoever had a grudge to settle from the term did it here! 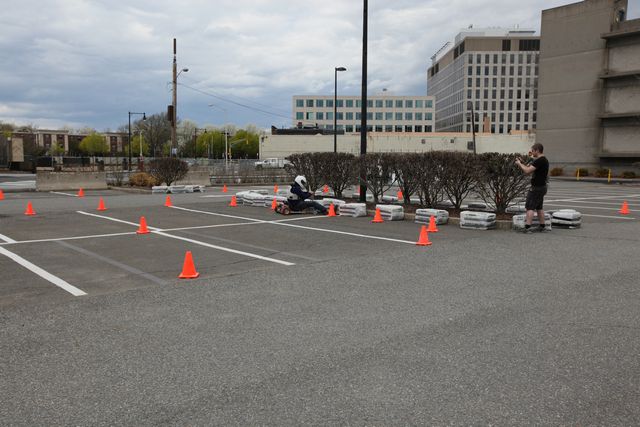 Coming into the center hairpin turn just a little too hot…

Those fluff bricks were set up for a reason, and they performed admirably. 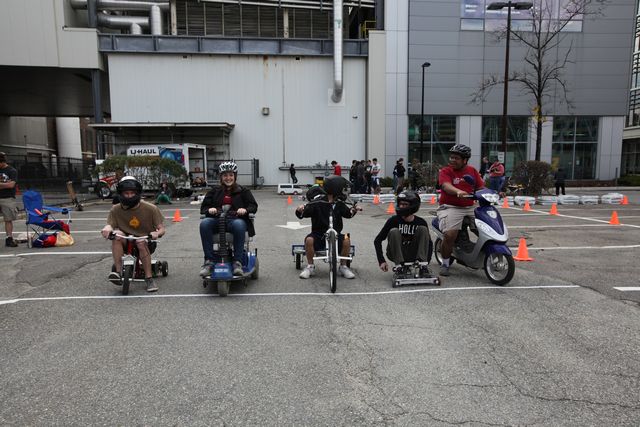 By this time in the early afternoon, vehicles from across campus had started showing up for Anarchy Hour. Seen here is bentrike, tinykart (not that tinykart, though maybe next time), and a few Electric Vehicle Team members. 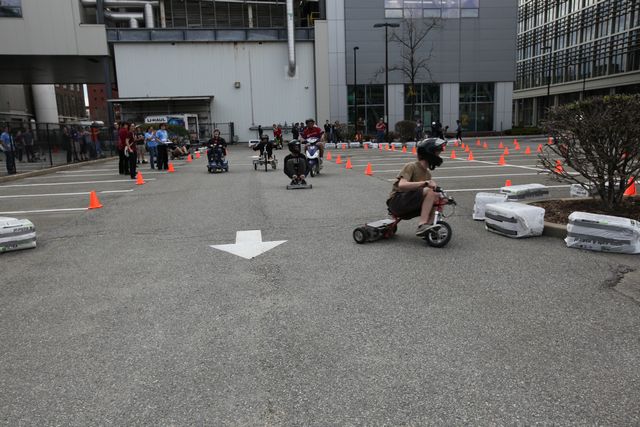 Ben, of course, hands everyone their collective asses. 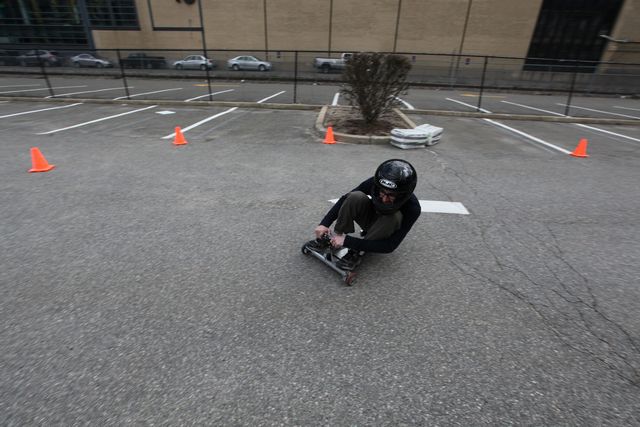 Watch out for this guy – not only did he revive LOLrioKart, whose wreckage  has been hanging in MITERS since 2011, but is up to plenty of his own no-good. 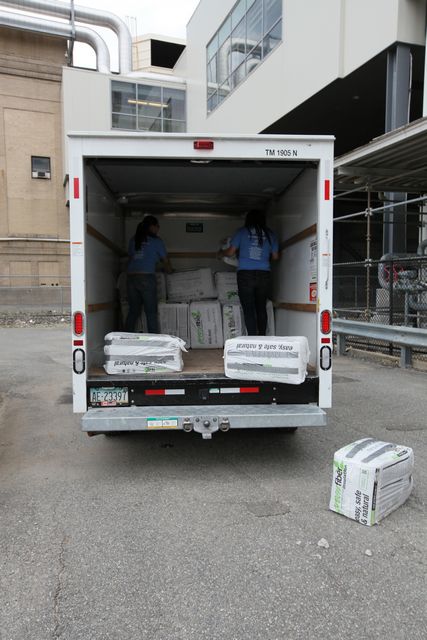 After everyone’s batteries finally ran down, it was time to pile the race apparatus back into the truck!

From here, the students have a final presentation this coming week to recap their builds and talk about their competition performance, then it’s time to clean up from the semester.

My thoughts for this time around:

And finally, as promised, the highlights video. Doses of insulin for your impending diabetes are to the right.

So ends another season of 2.00gokart! I have some shop organization to do in the coming weeks before the Singaporeans get here, and I also hope to finish the last little details of Chibi-Mikuvan.

After the races were over, I decided to try using a GT680W in its intended application. Well, to be fair, I don’t think they meant for it to be used in this particular mounting configuration…

I approve of the night video capabilities of this thing, which I think is almost equivalent to my 2010-era handheld camcorder, except without optical image stabilization. Being so flat, it buffers in the wind too, contributing to quality loss. I think for a $90 camera there is not much more to be asked.