In the intervening week and a half between the last update and now, a few things have happened. First, I untorqued the oil filter, and bought a set of torque wrenches. I hope you guys are satisfied.

Next, I tweaked and diddled enough things to get Mikuvan driving – tenuously, and only for a little while.

We… err, muscled that one back home.

This video was taken before the arrival of my new mass air flow sensor. The engine was easy to keep running when cold, but difficult otherwise after it warmed up, to the point where it would stall quickly if I let the throttle pedal go. The reason for this was yet unknown to me, but a few friends thought it might have something to do with the engine temperature sensor or intake air temp sensor, neither of which I’ve inspected with a voltmeter.  The missing MAF couldn’t have helped either.

But it showed that it could move under its own power! There was hope. I didn’t get up to a speed to shift into second, however, so the transmission remains untested.

After that, still waiting on the MAF replacement, I decided to give the underbody a much more thorough rust inspection. 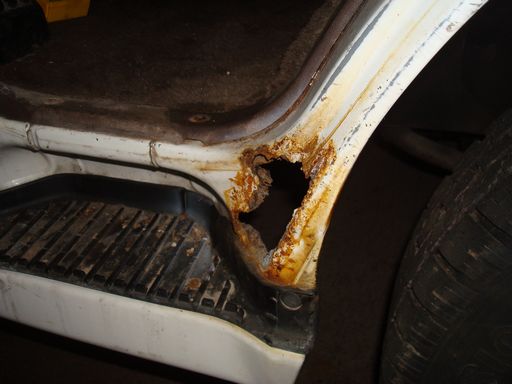 The matching rust holes in the front step got much bigger with some scab picking. Oh boy.

I chiseled each rust patch to the point where the metal became ductile, so some of these holes were growing distressingly large. But these are the full extents picture. 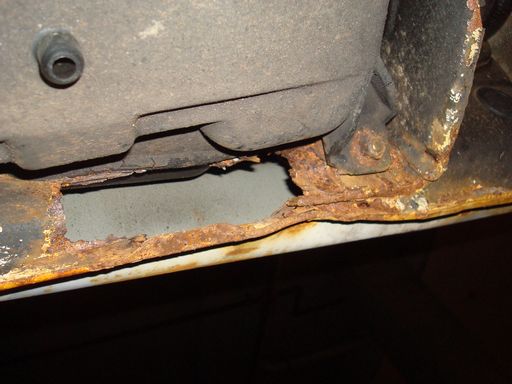 The left side which has seemingly met another vehicle in a somewhat amicable fashion has a large through-hole on the bottom. There is a matching set of holes on the right, which are smaller. 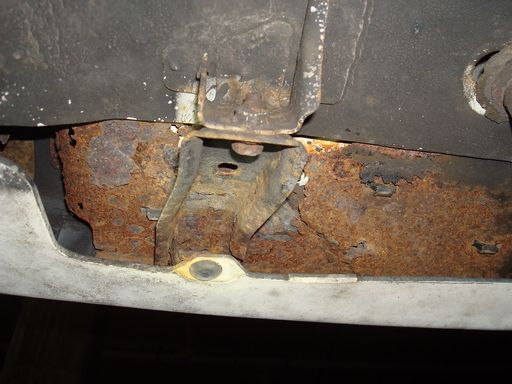 The bumper, though, was in horrible shape. Not the frame where the bumper attaches, fortunately, but just the bumper metal. Above is a picture of the right side bumper attachment point, and this thing was so bad that it was crunchy when I stepped on the rear tailgate. Clearly no longer structural. Replacements for the bumper stamping seem to average $600+, so I might start asking on derpy van owner forums for cars being parted out soon. Worst case, I’m gonna weld a mockup from something ridiculous like 1/8″ waterjet-cut steel plate later.

The deterioriation of the other side was also significant, but much lesser – the metal was still ductile.

I didn’t check extensively for this when I bought it in PA, so I suppose it’s also my fault. I can’t help but think Mikuvan is a little “lemon flavored”. However, given the talks I had with the seller, I ‘m not sure if he knew of the extent of the rust either.

What I can take solace in is that the trouble spots are on the body sheet metal (patchable) and on a “consumable” item, the bumper. They must make the bumper from a lower quality steel on purpose – the frame around it is in fine shape. There is basically no frame rust, which is the important part.

I don’t intend on addressing these body problems yet. It would be nice to get it running before making it pretty – the summer months also have no threat of wet road salt, so if anything, this is a great season to find this out. 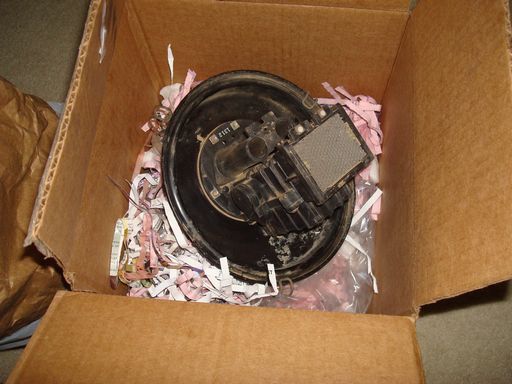 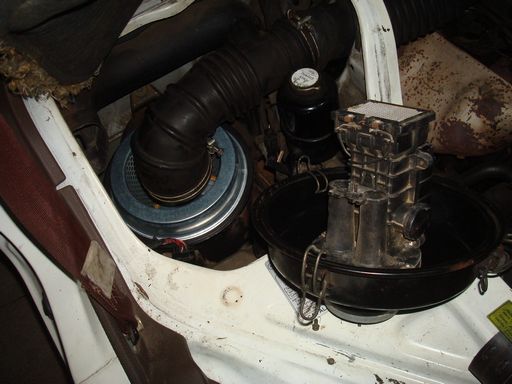 The MAF unit was the same, but the “can” it came in was much smaller. So, some screwdriver work later and I had the MAF unit swapped into my intake canister. I also got a new air filter during this time, on the left.

After replacing the MAF and resetting the ECU, I managed to get the engine going again enough for a new error code to appear (if the MAF was fixed or I bought a lemon-flavored unit). The ECU read “all clear” this time, but the problems were still present. Inconsistent starting, and this weird cycling behavior:

As I understood it, this might have been the ECU trying different fuel-air mixtures for starting, none of which were quite right. I’m not sure of the actual cause, since I’ve literally never heard an engine make this kind of sound.

One issue I had not yet resolved was checking fuel pressure or changing the fuel filter. I got a Harbor Freight fuel pressure meter, but it clearly required me to cut the fuel line and splice it in to use, something I was not keen on doing yet.

I could definitely try the filter in case it was clogged through: 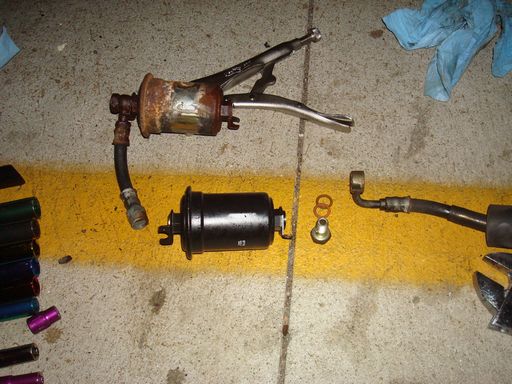 Cue 2 hours of gentle hammering later, and the “original” filter is out. My goodness, it must have been actually original. The thing was almost rusted through, and when I took it out and shook it over the oil drain pan, rust colored pasty chunks fell out of it.

The replacement filter was a few ounces lighter, and I can’t imagine it being a newer or better design, so I’m gonna say there was a ton of shit inside the old filter. 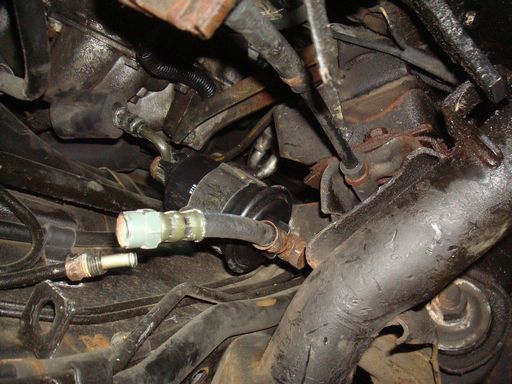 Remounting the new filter was a relatively painless process. It was in an incredibly awkward location, but at least it was accessible directly from under the vehicle, without dropping anything else, and with only one universal joint ratchet involved!

With the filter hopefully no longer depressing fuel pressure, I tried cranking the engine again. It still cycled as before. This time, I basically couldn’t get it to fire any more, or for it to “catch on” and start idling.

At this point, I decided to move onto the last “0.5” point of the 3.5 things that constitute spark, fuel, compression, and spark timing: the timing. The thing to do was to remove the timing belt cover, crank over the engine manually to the point where the camshaft pulley lines up with its timing mark, then check the position of the distributor rotor. The rotor should be pointing basically at the #1 spark plug.

So with some trepidation, I removed the distributor cap and and upper timing belt cover. 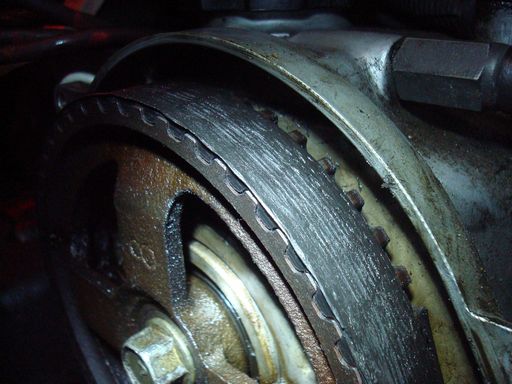 First, that timing belt is in bad shape. Like worn down to the cords bad. This indicated to me the tensioner roller was probably seized, or the belt was just dragging on something else. 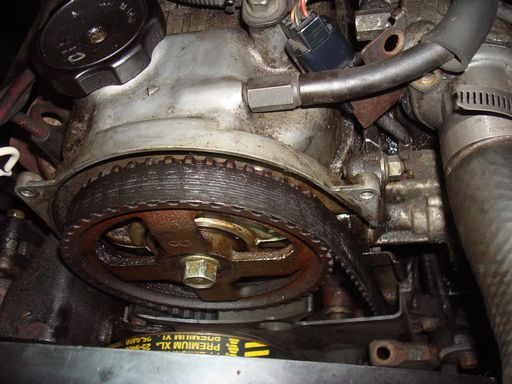 I put a socket on the big camshaft pulley nut and began pulling.

The timing belt jumps several teeth in response and I almost fly out of the driver’s side perch. There was basically zero tension on the belt – see the ‘convexity’ on the right side. I could push this thing in a good inch and a half. I’m amazed the engine ran at all. Perhaps the first few good starts were with the timing belt in a serendipitous position, and something I did caused it to skip teeth thereafter – now, there is no timing the engine can possibly be on which would let it run. 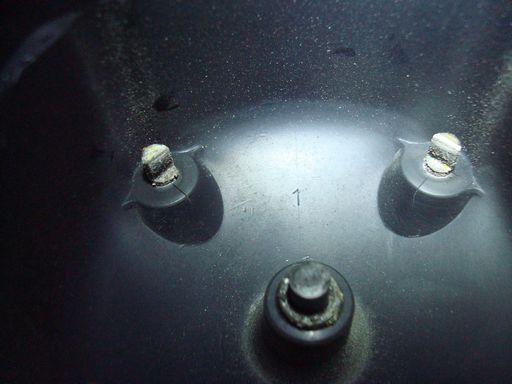 Speaking of the distributor, the points were also in seriously bad, corroded shape. I’m further amazed that it somehow ran now. Luckily, I have a new OEM rotor and cap.

I was clearly not going to skip the timing belt back to the right place, and at any rate, it needed to be replaced.

I was at a decision point here. Now, the Official Derpy Van Service Strategy Guide said nothing about what needed to happen before the timing belt was replaced – it just showed every part of the front of the engine in the clear, as if I could access it or something. I basically accepted this was an implicit “Drop engine”. At the very beginning, I said that if I had to drop anything to solve a problem, everything was coming out and I was going electric right away.

Before I did anything else, I decided to seek professional advice – by which I mean ask the Canadian Mitsubishi Delica forum. After getting some reassurance that I would only have to remove the radiator to do this, it became a more palatable task.

I basically declared #YOLO #SWAG: If the operation was completed successfully, then hurray. If not, or I badly fucked over the engine doing so, then more things will just be removed until I am left with a glider frame.

With this in mind, I ordered a new timing belt and tensioner kit: 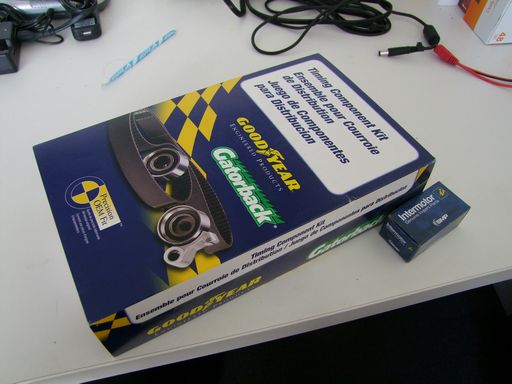 I got the part from Rock Auto, which seems to be the McMaster-Carr of random car parts. It was even the kit recommended by the forum! 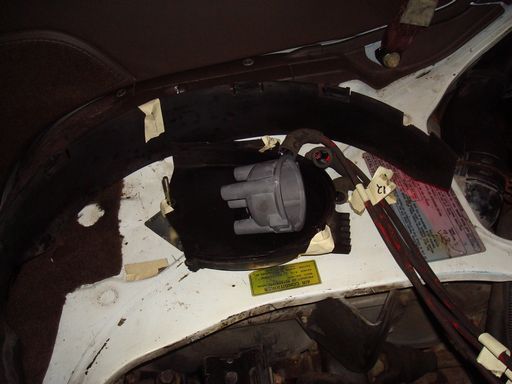 Time to remove more things to get the radiator out. I busted out the masking tape to label wires and tape fasteners to their respective holes so I didn’t end up with like 30 extra bolts after all was said and done. 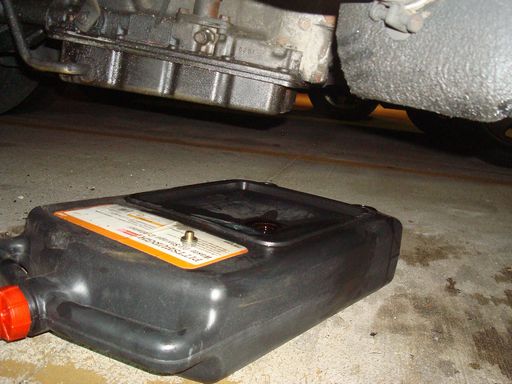 Hang on a sec – you mean the transmission is also connected to this radiator?

Fuck integrated systems, man. I had to drain the transmission first. Luckily, I disposed of the 20 tankerloads of black used oil last weekend at an Advance Auto Parts locally, so my filth container was available for the task.

The manual indicated that if the transmission fluid smelled burnt, it was a bad sign. Well, what if it smelled both burnt and rancid? I couldn’t describe the smell as anything other than a very sketchy Chinese restaurant. DEXRON-II tranny fluid apparently contains jojoba oil, a natural oil. (Here was when I learned that transmission fluid at some point was made of whale oil.)  Actually, given the history of neglect of this vehicle, it might as well have had used McDonalds frying oil added to the transmission.

(I also totally did not intend to capture the single droplet of transmission fluid in midair, but that’s pretty awesome.) 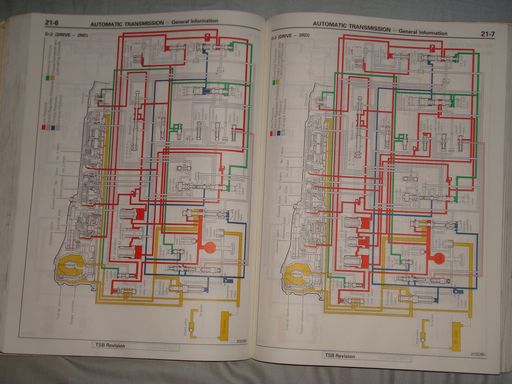 Also, speaking of automatic transmissions, what is this shit? How can anyone have thought this was a good idea?!

Fuck this noise so incredibly hard. my only previous car and every car i have driven was automatic. 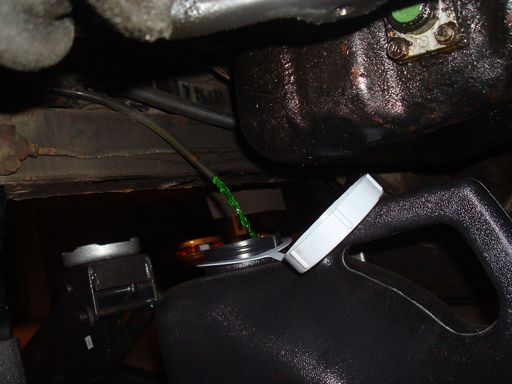 The bleedout of weirdly neon fluids continues with the radiator. This thing has clearly been corroding internally for a while, as the first few seconds of coolant was a bit brown. It cleared up, however.

At the same Advance Auto Parts I made the oil drop at, I learned that coolant could not be collected. Apparently it has to go (in MA) straight to the local public works department or hazardous waste collection site for disposal. That, or through some unscrupulous egging by friends, poured into the toilet so it goes through the wastewater system (as opposed to a storm drain, which around here goes straight to the Charles River, which is itself bad symbolism).

As I learned, the reason is because used oil can be recycled readily, whereas coolant (ethylene glycol) must be disposed of.

Maybe I’ll just polymerize it into polyethylene-glycol and then have a year’s worth of very smooth bowel movements.

After the radiator drain and transmission bleed, I decided to hold off on removing anything else until I have some  backup. Steps from hereon require working under the vehicle while on jackstands, something I am not comfortable with on my own – crawling around under this thing while supported by 4 little spindly steel triangles sound incredi-sketch.

Operation: BAD TIMING is scheduled to occur on Saturday. Here goes nothing in particular! Any peanut gallery advice before I dive in?

9 thoughts on “The Brief Rise and Fall of Mikuvan”