It’s been a month or so since my last post about my personal undergraduate victory garden, “2.00gokart”. At that point, nobody’s really assembled anything or completed their designs yet. That’s all changed. Here’s what’s going on now, and what will happen in the next few weeks! 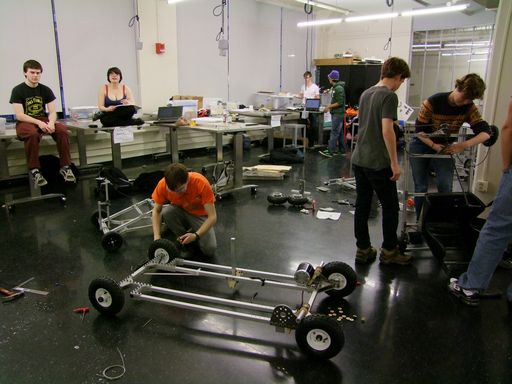 Chaos and half-assembled karts is the law of the land as the “Milestone 7” checkoff and inspection draws near. This is a full “rolling frame” demonstration – brakes must work and steering must be hooked up and functional. The vehicle mechanicals do not have to be final, but to get to this point, it’s sort of implied. Hacking systems together to pass the inspection was discouraged, and nobody really tried to push anything sketchy. After MS7, the only tasks remaining should be to finish up electrical assembly. 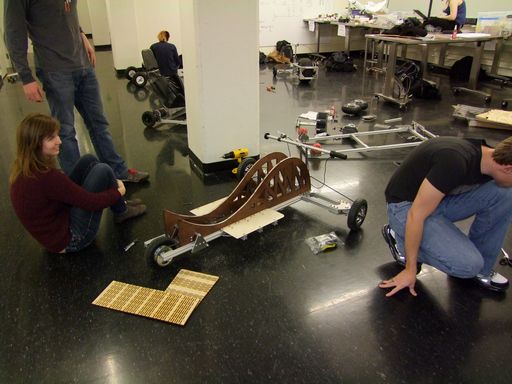 At this point, things were being raised onto wheels and the true creativity of the students began to show. 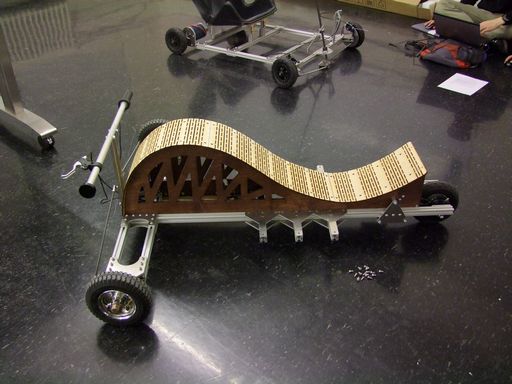 This thing, for instance, had a custom wooden coachwork/centerpiece which was partially CNC router machined and also featured living hinges laser-cut into thin plywood.  On top of all that, the steering isn’t a normal wheel or handle, but it’s tilt based. The builders, Nelson and Carolyn, both have blogs and I swear they add content more often than I do. This creation has been officially named Zoran, which I briefly confused with Zorak. 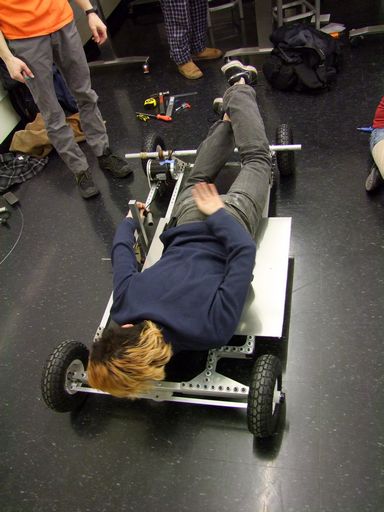 Some of these things are conventional, others just a little off the wall, and still others… well, they have interesting operating postures. I’m kind of glad to see that nobody is really building a normal 4 wheel kart – there’s really only one. But hey, that’s not bad either – last year, the most normal and innocuous vehicle was done on time, on budget, exactly as described, and performed reliably. 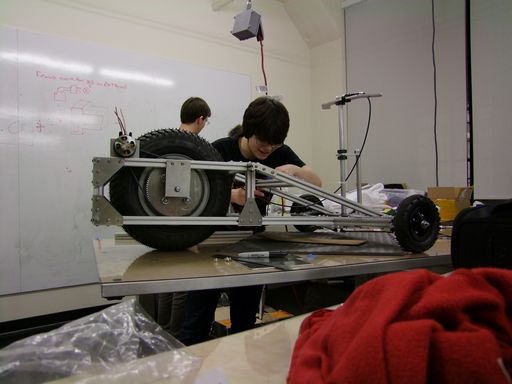 Other vehicles are defined by a central feature, such as Dat Wheel.  That’s a 18″ lawn tractor tire that the team specified off Surplus Center. You’d  basically be sitting directly over it.

So that’s a sampler of the oddball creations coming out of this crew of MechE sophomores. What’s next for everyone is putting electrical systems together. I’ve been giving short “mini lectures” about places to get electrical parts such as switches and contactors, and also good wiring practices and other safety-related device (such as in the background of that picture – no male-side connectors allowed on batteries!)

In about 3.5 weeks time, everyone will once again (hopefully) fly down the service road and up the garage. This year is going to be tremendous. 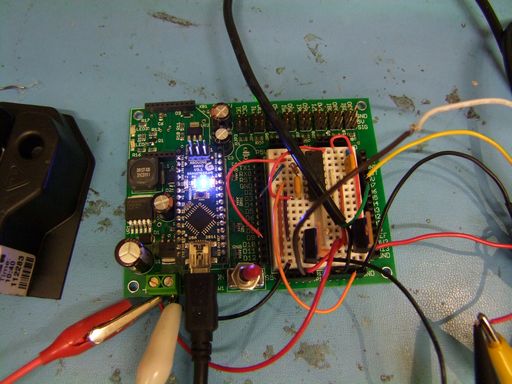 On my end of things, I’ve been recently tasked with creating a relevant homework assignment for the EV students. One of the homework assignments for 2.007 proper relies significantly on you having built a competition robot. Since none of the alternate lab section students have, everyone was a little distressed. I therefore had to invent an alternative.

My alternative is a miniature (1-3 amps) current mode controller for a DC motor. That’s right, your homework is to torque control. I created the hardware hookup most of the way, requiring students to read a datasheet or two to discern what else needs to be hooked up, and also how to read the DC current sensor. The half bridge is standard fare for me – an IRS21844 gate driver hammering on some obsolete but sufficient IRF2807 N-channel FETs. The whole rig is synchronous rectified by nature. Really, this can be scaled up 100 times and be fully legitimate plus or minus some power supply changes.

Once the students finish said homework, I’ll release the working code & “class solution”, which is the most documented and commented thing I’ve ever written, as a general resource. 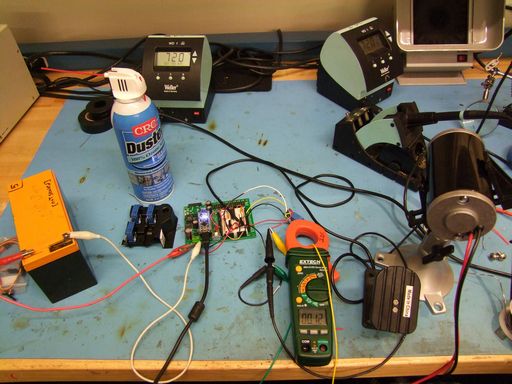 Here’s a picture of testing the whole setup, with a DC motor plant, ammeter to verify output, and a battery which can take regeneration current. Power supplies may be safer to hand off to a fuzzy duckling, but they cannot handle regeneration current, so a 10 amp fuse in the test battery will have to prevent things from going too awry. The controller is based off a simple integral-only (i.e. ramping) loop, which is more than suitable for driving highly inertial, dynamic loads like a vehicle.

So that’s explanation for the video last week! What really happened there was that I was pushing 15 amps (at 20 volts or so) into the field winding of the large blue motor (it’s a “separately excited” DC motor, so the mini half bridge board could crank 5 amps (briefly – I raised the limit just for the video) into it and have it just barely spin up. No, it is not creating perpetual energy. Without the torque control loop, it would have grenaded instantly.

From here out, I’m only bumping the students in the right direction to finish, and also making sure the appropriate paperwork and signoffs are in order for the final contest. In other words, “Wait, you want to do what with the garage?” “Yeah, we did it last year.”