After my Digikey and Avnet shipments arrived, I could finally finish out the 8 remaining RageBridge2 boards in the panel. Using my handy dandy hot-swap test rig, I’ve determined that they at least power on right now without exploding, which is a good start.

Update 16 October! The mixing firmware has been implemented.

The two RageBridge2 boards I assembled last time have been tested in real-life driving already. First, I installed it in Null Hypothesis in place of the RageBridge v1: 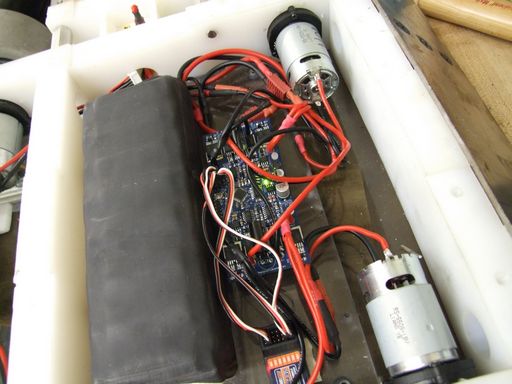 Then I gave board serial #2 to Adam and had him install it in his pre-Dragon*Con speedballed robot Blitz.

And then, we faced off at the Somerville mini Maker Faire:

Basically what it reduces to is two somewhat gimpy bots driven by two out-of-practice drivers. The motor that smoked in Blitz was on the front lifting tines, and it was being driven by a Victor 883.

But despite my best efforts to test these boards out in a strenuous condition, Blitz and NH are kind of… the same. They both run 4 overvolted drill motors (and keep breaking them… clearly these things have gone totally to shit) coupled to 4 inch wheels, and while NH has a higher top speed due to my more overvolting, the RageBridge boards limit the  motor current such that the motors kind of behave the same anyway.

I need more data points before declaring the RageBridge Certified Legit™. That is why I will now officially announce the….

These 8 boards will be released “into the wild” as much as possible such that I am not in control of their use and installation save for a short user manual page. I’m therefore going to put the call out for participants.

You may qualify for the RageBridge Breeding Program if…

If you agree with the conditions, send me an email (charlesg@ this 3-lettered university name .edu) with the subject “RAAAGE” (that’s 3 A’s) and the following information:

Because there are only 8 boards available, I clearly cannot take everyone. I’m seeking “diversity of loads” here – vehicles, robots, elaborate dentistry tools, etc. I will set a deadline for “applications” of MIDNIGHT on Wednesday, October 17th (that means as soon as the clock turns to 12:00 and it becomes the 17th). Eastern Standard Time. I’ll notify both accepted and rejected parties then. They’ll ship during the week.

I intend to send out one more board revision before releasing the design to manufacturing. This new revision will wrap up some of the hardware loose ends like component placement, manufacturability, trace routing optimizations, and like, making the RESET button actually reachable with an average finger.

Boards and parts (especially parts for 10…) are still really expensive, especially in low test quantities where I can’t take advantage of price breaks.

If you like the RageBridge and its new addition of a constant current output mode to the small- and medium sized robot/vehicle controller world, and want to support its development, then please let me direct you to my donations page. There is no suggested donation, and contributing does not constitute a pre-order for any product!

The whole mission of the RageBridge project is to try and make a compact, reliable dual channel high-powered motor driver using 21st century designs and parts, with no “fanciness” like dual encoder inputs, built-in PID controls, 8 different ways of taking commands, etc. in one unit. It is a rebellion against the new trend in robot controllers to integrate all of these functions and charge more money for it while not really being that good at, you know, driving motors. Basically, I want to give the venerable Vantec series and Victor 88x series of controllers a this-decade equivalent. Raw, simple power for applications which demand it, and nothing more.

Support us on Kickstarter! The link to RageBridge’s campaign is…

Not yet. I fully intend to pitch this sucker up on Kickstarter when I have a demonstrably working device. No promises and renderings here – I’m fully intending to use KS to gauge the initial market and to tell me how many times to hit the button. So if you’re just totally into a public fundraising campaign or find paypal links repulsive, hang tight!