Along with most of the rest of MITERS, I’ll be party vanning down to the New York Maker Faire on…. well, now. It’s this weekend.

Like last year, I’m hauling an immense pile of MITERS cargo in addition to a few hapless freshmen and sophmores (who I think count as cargo anyway?). Last time, I brought Landbearshark. This time, I’ll be bringing something about equal in mass but a little more fun: Double Chibis! Tagging along also because they fill space efficiently will be RazEr REV2 and Kitmotter Display Stand.

There go any chance of flying down the hillsides at the NY Hall of Science though.

The Chibikarts, unlike most of everything I build, have been working rather reliably. Chibikart 1 suffered 2 broken motors when MITERS used it for Orientation activities – I’m not really sure went on, but the front two motors were just totally unresponsibe – but the controllers were fine. However, Chibikart 1 still worked with the 2 rear motors, so that’s been its demo state for most of this month.

Last week I decided to crack them open in anticipation of repairs for the NYMF. 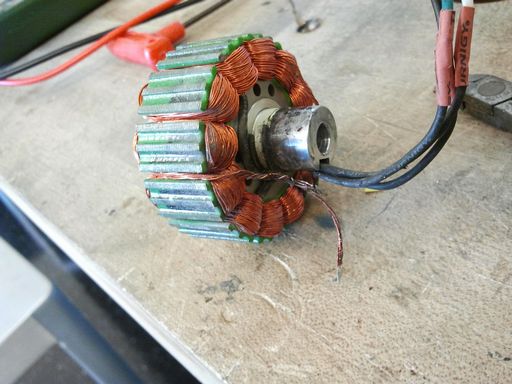 Well damn. It looks like my somewhat hastily-soldered phase star-point connections exploded. The solder joints became little balls of solder – indicative of a serious current overload or something. Either way, the damage to both of the motors was similar, so I just re-terminated them. I coated the windings in a thick layer of polyurethane varnish that the high-voltage crew at MITERS like to seal their Tesla Coil secondaries with.

A few days ago, Chibikart1 was involved in a…. “filming accident”.

While I was in the middle of the Poorly Coordinated Death Spiral, the right front motor lost power and started smelling real funny. Upon opening the motor again, I discovered that the windings were actually not burnt – but just shorted. As I unwound the stator,huge chunks of the magnet wire insulation were flaking off and coming apart. I was literally pulling lengths of bare wire from the stator.

Bottom line is, don’t seal your motor with urethane if it has wires made of urethane. On a similar note, titanium screws in titanium threads will degenerate into the slightly less useful case of a solid blob of titanium. 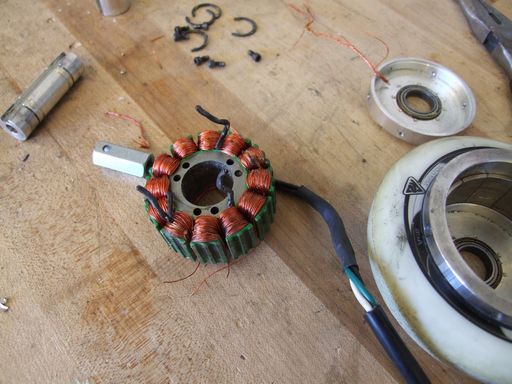 What was worse, actually, was that the urethane sealed the whole stator into a solid mass of wires. I could not hope to ever unwind this without baking or chemically destroying the urethane in some way. The magnet wire strands just broke off as I tried to pull on them.

I had to rewind both of the front motors, which didn’t take that long since I was used to it: 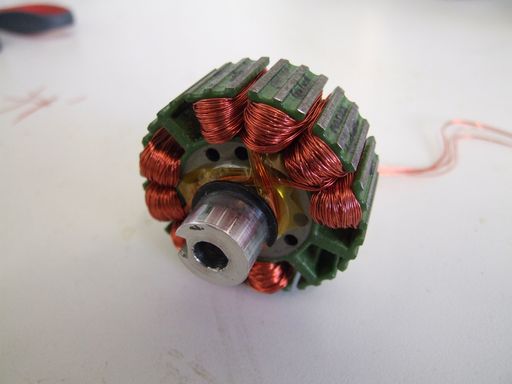 To give the wires one more layer of protection, this time I insulated the crossing strands with some Kapton layers. 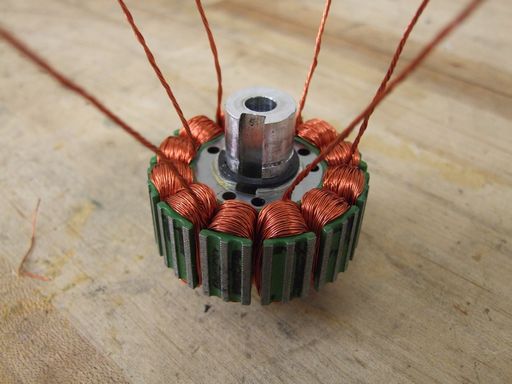 Completed rewind. I decided to group the star point connections into one termination this time instead of attempting to solder a ring of wire around the outside of the windings. The whole mess was coated in epoxy (like I should have done to start with…), and Chibikart 1 is now kicking again.

Chibikart2/DPRC has received no mechanical mods or upgrades, but I did jump the shunt on the 350W Jasontrollers a bit to give it some more punch. Because of the ~25A constant current limit of the Jasontrollers, DPRC is actually a little anemic despite having higher potential power. To really use those motors, I’d need some sensor boards (hmm, I wonder where I could get some) and use higher-current Kelly controllers.

Come see Chibikart and DPRC (and RazEr & co.) at the MITERS display area in the Hackerspaces area (Zone B) at NYMF!

Oh yes, a preview of things to come: 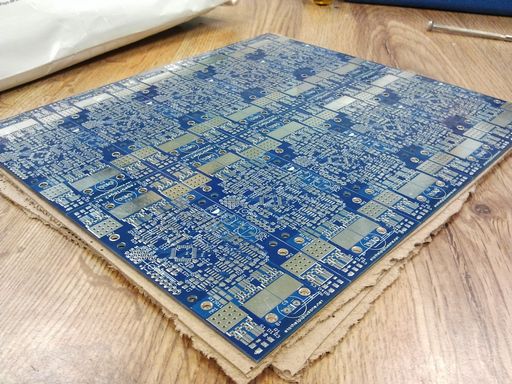