…you know, the stage of all my projects where they become stuck in software hell.

For Chibicopter, oddly enough, it’s not been the actual operation code which has stumped me, but the process of getting it there. As previously described, Chibicopter’s only means of code uploading after the ATMega328 has been turned into an Arduino is through wireless bootloading. This has been done successfully many times. In the Chibicopter board schematic, I included components intended to use the Adafruit Method, and a similar arrangement is used on the Gravitech XBee shield for the Arduino nano and on the 2.007 Nano carrier. So it’s gotta be pretty bulletproof, right?

Well, kind of. Here’s how shit went down.

First off, I had to make one last wire jump for everything to stand a chance of working. The reason is because I connected the RTS pin of the FTDI cable (through the wonderful Adafruit XBee adapter) to DIO8 on the XBees:

(Don’t mind where it says “DIO12” – that’s because Sparkfun’s XBee footprint is weird, or something – it’s actually DIO8 according to the manual)

I chose DIO8 instead of DIO3, the usual choice, because it was much closer to the appropriate pins of the ATMega based on component placement. It would have been less of a topological acid trip to route the trace there. The only problem with choosing DIO8? It’s not a thing. As in, DIO8 turned out to be only DI8 when I tried to configure it in X-CTU. 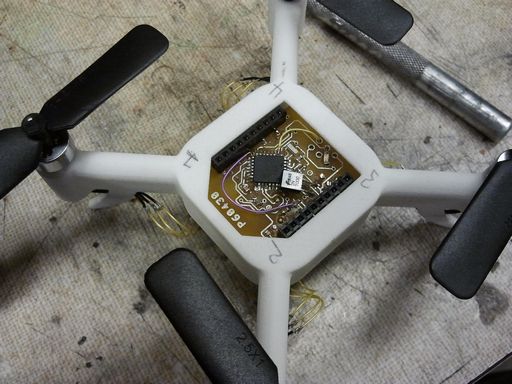 I performed a Little Purple Wire jump, after cutting the DI8 trace, to DIO6 across the other side. Conveniently DIO6 was also the XBee’s default RTS pin. However, in the interest of following instructions for now, I configured the pin as standard digital input (on the transmtiter side) and a default-high digital output (on the receiver side). Now, I’m assuming there’s pretty much no difference at this point between setting it as instructed or setting both sides to “RTS FLOW CONTROL” for this pin, but I could be wrong.

The fix was promising at first – I could upload blink programs of various durations with no problems through Arduino, getting to the “Done Uploading” stage every time. But as soon as I tried uploading a bigger program, it would quit – usually after only a few seconds (short enough to transmit a blink program, but nothing much else). The activity LED would turn off, whereas if it were transmitting, it would be on pretty solidly.

Scoping the TX/RX pins and the DIO pin associated showed that the reset pulse was making it through (as my hack D13 LED did flash) and at least something program-like was being transmitted. However, it would randomly shut off, and the process would abort with avrdude-in-Arduino complaining that the programmer was out of sync.

I thought it might have been a mild baud rate mismatch problem (and still suspect it to some degree), so I hardwired Tx and Rx straight to eachother on the XBee adapter board: 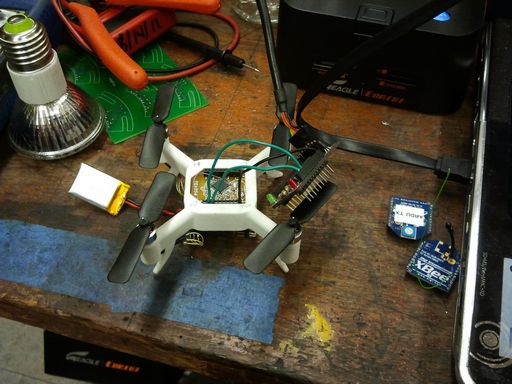 Of course this arrangement worked. The blame now lay square with the XBee, and at Shane’s behest, I reset both XBees to factory default, wiping every setting I might have changed, and then changed things back exactly as instructed. (The transmitting one came out of the defunct RazErblades glove controller and the receiving side came out of…. hell if I know where)

But only sporadically. I’m in a position now where some uploads will complete, some will totally fail within the first few seconds, and others will seemingly fail and cause Arduino to wait forever in the “Uploading…” stage until finally terminating, usually a full minute later, with an out of sync error.

Weeeeird. Well, at least I can upload some code:

I’ve since balanced the propellers much better (the whole thing doesn’t really resonate any more, though it’s still not in perfect balance) and have cut and paste enough code from Pololu’s MinIMU9 library to read all the sensors and process them. I’m not sure how you’re supposed to use their library, by the way, so I just copied and pasted the important I2C register-setting code from it and never looked back. Are you supposed to… instantiate a new instance of each sensor or something? It didn’t compile in Arduino 1.0, and the provided AHRS code was of little help since it had such lovely high level functions such as “Read_Gyro();” without explanation of where they came from, and which I couldn’t located in all the linked .h files anyway.

Anyways, Chibicopter is some more code and tuning away from flying, which is to say it will probably sit in a box for the next few weeks. If anyone from the Arduino hacker community has any idea why my code uploads are spotty, I am open to suggestions. My number one suspicion is still the 57.6Kbps baud rate mismatch now that other inconsistencies have been eliminated.

The next step is to revive XBYPASS and glue it back to my transmitter since for some reason I decided on making this thing talk over wireless serial. That step, however, has been done before. Wow, finally a legitimate use for XBYPASS that is not trolling the anti-Arduino crowd?! 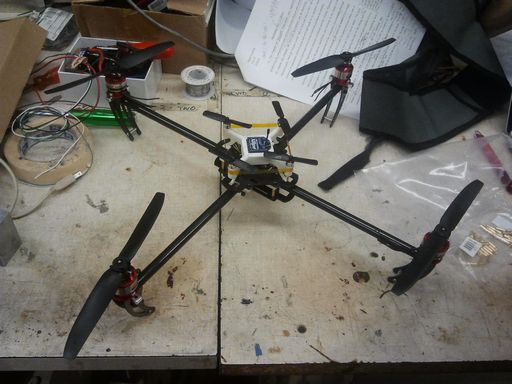