… well, okay, only when I’m not at the controls. Years and years of driving fast and decidedly non-holonomic robots  with questionable traction in battle conditions have conditioned me to “OH GOD FULL STICK” as the only method of transmitter operation. This, as flying both Tinycopter and 4pcb have taught me, does not work for aircraft – the overcompensation I apply can clearly be seen in the second half of the video.

Anyways, so why does Tinycopter fly now and not before? Oddly enough, the most important change was not in software: 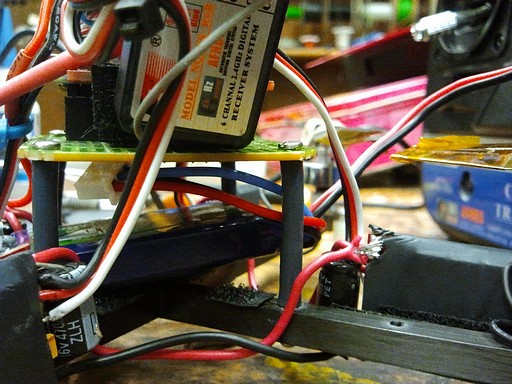 What is seen above is the four aluminum standoffs that formerly mounted the board replaced by some sections of 1/16″ ID soft silicone tubing.

I was suspicious of one very critical aspect of successful multicopters: sensor vibration/mechanical noise isolation. To me, mounting your IMU on a loop of tape or chunk memory foam seemed to make it into some kind of tuned mass damper kind of thing which would have its own vibration and noise problems, because the sensors have finite mass too. Mounting any kind of mass on the end of a spring (flexible member) will cause it to behave like an oscillator at certain frequencies. But what I never thought deeply about was just how high a frequency that system would actually resonate at.

Consider for example a sensor board that weighs 5 grams and a block of foam that has a stiffness of 1400 N per meter. 1400 N/m is not unreasonable – McMaster’s softest polyurethane foam is rated at 25% deflection @ 1psi, and for a roughly 1 inch square, 1/4″ thick chunk that holds your sensor boards, the equivalent ‘spring constant’ is right around that number. The resonant frequency 1/sqrt(M / K) for that system is above 500 Hz, which is well over the  analog bandwidth of the IMU boards you can generally buy.  Visco-elastic materials like rubbers and foams also provide good *damping*, generally, so frequencies outside that one magic resonance tend to be well suppressed.  On Tinycopter, I filter everything at 12.5Hz anyway.

But what really made me remount the electronics on little wobbly silicone legs was a visitor from Boston University’s IML, where they have real quadrotors. He made the suggestion that I could potentially mount my entire electronics board on some soft tubing instead of hard aluminum standoffs bolted to the carbon fiber frame. Okay, that’s it – a real quadrotor guy just told me something, so it must be legit, right?

Tinycopter flew much better after this treatment, so much better that I could actually start tuning gains. Before that, there was no gain low enough that it wouldn’t stop just violently oscillating and randomly revving the props. My noise must have been on the same order of magnitude as my signal – and there is no (linear time invariant) filter which can get rid of that.

The other thing I did was sit patiently and wait for new propellers. By the end of that round of testing, Tinycopter’s props were 50% superglue and 50% Kapton tape – they were so unbalanced that those vibrations were beginning to cause handling problems. 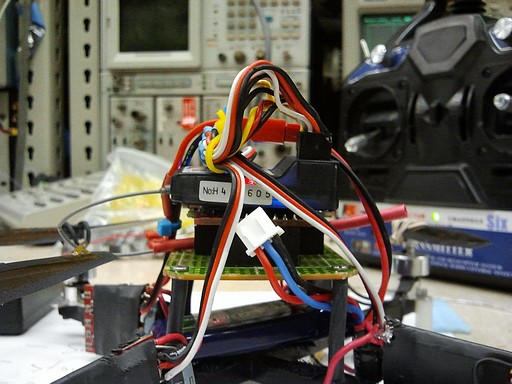 I also moved the receiver on top of everything else. This isn’t a change that made a huge difference or anything, but beforehand, the wires coming out of the receiver were both in a precarious blade-strikable location and were pulling the receiver off its Velcro mount. The new mount is located on top of the Nano and the IMU and is made of some layers of double sided foam tape.

After that, it was a matter of gain tuning and some practice before Tinycopter could fly stably and with reasonable control. As can be seen in the demo video, it flies very well and exhibits very little oscillation in the air.

Well, it all went to hell after they handed it back to me: 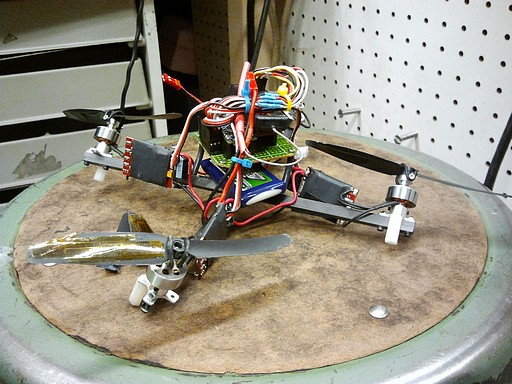 That was the result of that ceiling plant. Nothing’s broken per se, besides one prop, but it does need to be straightened and reglued. I also received my smaller Hobbyking controllers (the smallest in stock at the time – 10A, still a tad overkill), so I may take this rebuild opportunity to put those on.

In the mean time, Tinycopter’s current Arduino sketch (which now does fly things!)

Can I make Ballcopter again now?!