I knew I couldn’t leave it for long.

Born of the wreckage of the Deathcopter, kind of like a carbon fiber and superglue phoenix which is not on fire (yet), is a brand new quadrotor! Introducing tinycopter: 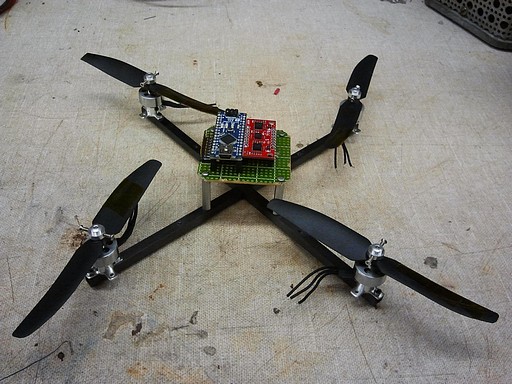 I pitched this frame together in a little under 4 hours with borrowed 4pcb parts and absolutely no planning beforehand. That means it should work perfectly when I wire everything up. 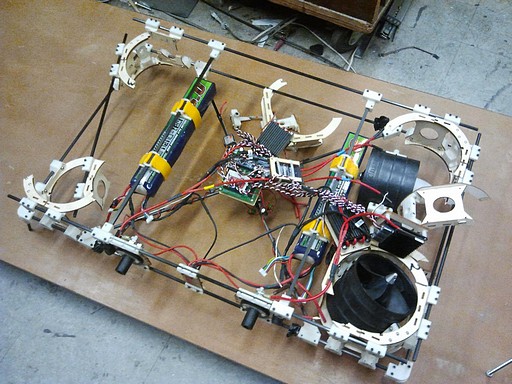 I began the process of scrapping the big frame after determining that using the two battery struts, which are square, would let me build a pretty sturdy combination motor mount and frame. I have still yet to test the two remaining fans – should they prove to be structural, maybe I’ll build something silly and fan powered again (or maybe an Avatar Gunship or something).

The IMU and Arduino Nano were recovered from the 2.007 carrier (which will see service in another vehicle some day) for Tinycopter. 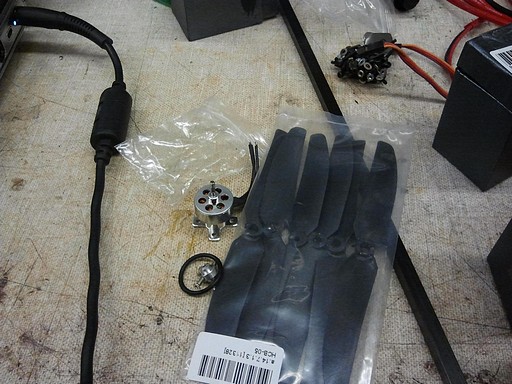 From the mass of quadrotor parts Shane purchased, I’m going to use the Hobbyking 10 gram motors and 5×3 propset (which were too big for 4PCB). Conveniently the 10g motors also have a cross shaped flange base, of which I will use two of the mounting holes. 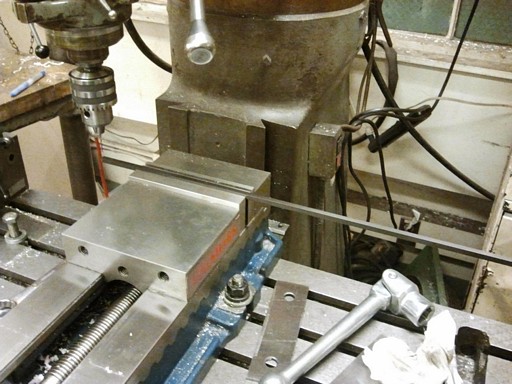 I drew up a quick Solidworks sketch of where the mounting holes should be, and then made both struts in series using the mill’s X axis for positioning. 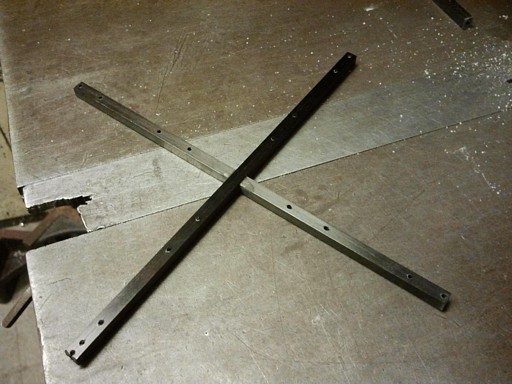 There is a “log cabin” joint (I am completely not sure of what the actual name of this is) in the middle of the carbon fiber rod that I just milled in the same setup. This allows the “X” to have a contiguous flush surface, so I don’t have to make any strangely shaped adapters in the middle. The four sets of holes near the center are for mounting electronics and accessories.

The joint is very tight-fitting, so I wicked some ultra-thin CA into it to keep the struts together. 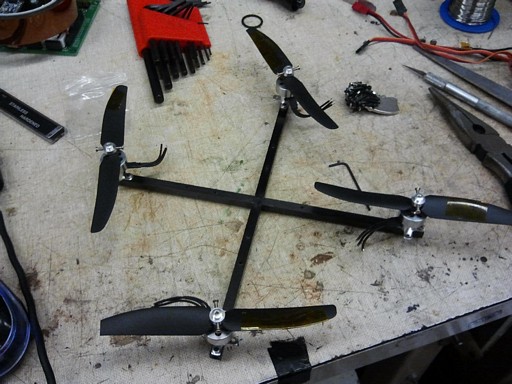 I spent a few minutes investigating different ways to assemble the 10 gram motors and props. While it comes with a prop saver type hub, it is terrible.

Okay, so the hub itself is pretty okay. The props, however, are garbage. Not only are they totally off balance (kapton tape is visible on them to correct for the imbalance – the worst one needs almost an entire leading edge full of them!), but the hubs are not level – they have sprue bits hanging off them requiring a bit of knifework, and the bore on the correct side of the prop to use with the prop saver is very loose and sloppy. The rubber band that forms the prop saver mechanism is also fairly loose, and I’m not keen on it flying off.

So I turned the whole thing upside down and used the prop saver ring to sandwich the prop against the motor face. Nothing’s being saved any more, but it’s way more solid.

Title image again! I quickly whipped up an electronics mount out of some perfboard. 1″ tall 2-56 standoffs, actually 4pcb’s spare landing gear, make up the electronics mount. The standoffs are flexy-CA-glued to the carbon fiber, since I could not get 2-56 threads to hold in the material. The electronics board will be very simple – just the Nano, the 6 axis Razor IMU, and some headers.  5 volt logic power will be supplied by the motor controllers directly.

I currently do not have a matched set of 4 tiny motor controllers, but they should exist (either found or shipped) by the end of the week. I’m planning on using some 6 or 9 gram controllers from either Hobbyking or equivalents from HobbyPartz, but that’s all contingent if some can be excavated on campus.

The battery will be a 2S or 3S, 480 or 500mAh pack. I was testing with a 3S pack and the motors seemed not to mind, but they produced far more thrust than I feel like was warranted – 100 grams or more per motor. However, I’d have to order 2S packs, since I don’t have any.  The plan is to have the battery, which is the heaviest single part, reside under the electronics deck. This keeps the center of gravity fairly high, and it should almost be inline with the props.

This is fully intentional: Intuition and urban legend both suggest that having a low center of gravity (defined as below the vertical center of thrust of the props) results in a more stable vehicle due to the pendulum effect. This is, however, actually not the case. The pendulum effect actually contributes more strongly to unstable oscillation the lower the center of gravity is. Ideally, the CG should be exactly in plane with the props such that inertial forces do not have a moment arm to affect the system, but this is practically difficult to achieve. In that case, it’s actually better to have it a little high, above the props. 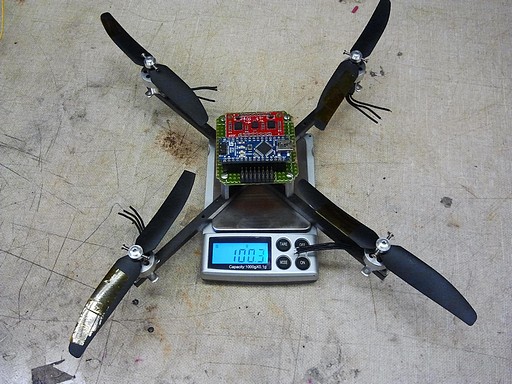 Tinycopter is going to be a bit chunky, since I still can’t grasp the idea that flying things need to be light. Without controllers, battery, receiver, or wiring, it weighs in at 100 grams. The battery should be about 50 grams, the controllers around 30 grams, and the receiver about 9 grams. So, the all-up weight of Tinycopter should be about 200g. I’m sure the battery can get smaller if I go ahead and order some packs (360mAh, 7.4v packs are usually around 30 grams).

Despite me just having sung its praise in the last post, XBypass will not be used on Tinycopter at first. Commenter beak90 has pointed me to the PinChangeInt library in Arduino, so I am going to try first to do that thing I described in the XBypass post with timers and pin change monitoring but without the ass of real software. This means Tinycopter will use a stock radio.

The electronics in Tinycopter have been positioned to use the “box” orientation, which I find a little more intuitive since I can think about it as some kind of flying robot. I’m used to driving robots on the ground, and my transmitter technique is definitely reflective of that. I should be able to make it ‘mode switch’ in software as needed. 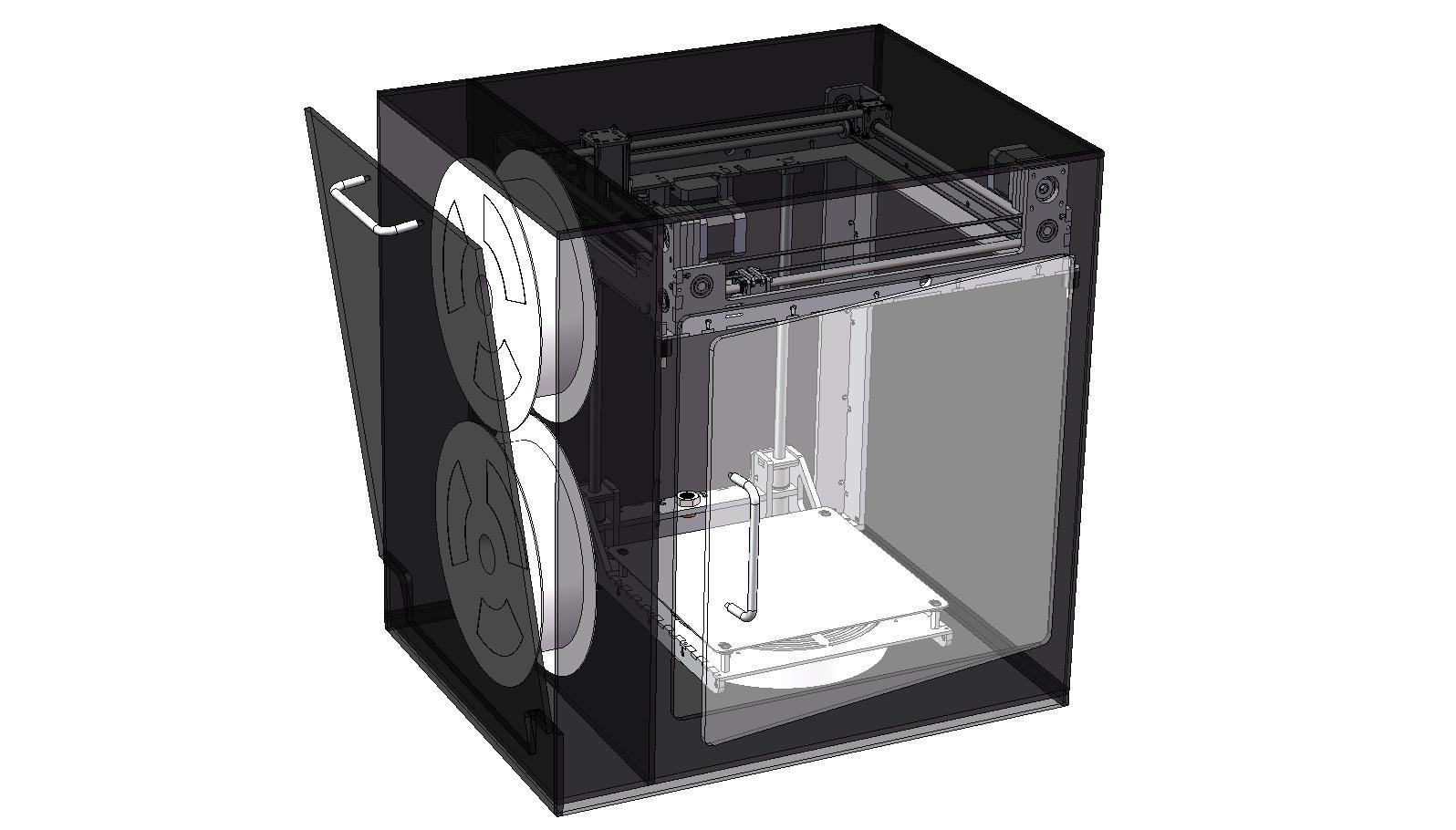 No external t-nutting or support equipment yet, but it’s getting there.

3 thoughts on “Revenge of the Quadrotor”