The past week or so has seen me throw 500 miles on a rental car as I dash back and forth between home base, the Invention Studio, and Freeside Atlanta (and a hardware store or two, among other places) working mostly on Pop Quiz.

Technically, Dragon*Con has already started (today being the first day of the con), but the robot events aren’t until Sunday and Monday. That’s fine, because Pop Quiz is done. 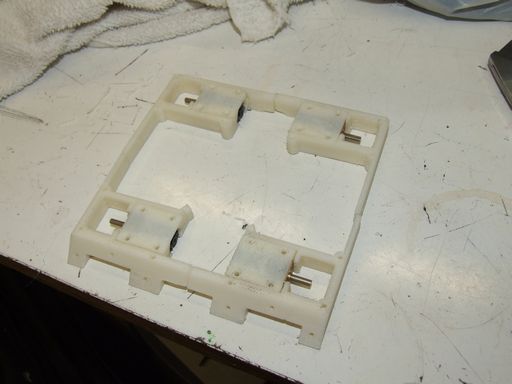 Step one: Clean up all of those 3d printed parts from last time with a bit of crafty knife work.  The small surface imperfections in the plastic print mean the motor mounts are extra-cozy – a bit of pressure is needed to seat the motors into them. This is good, since I’d rather have that than wobbly loose motors. 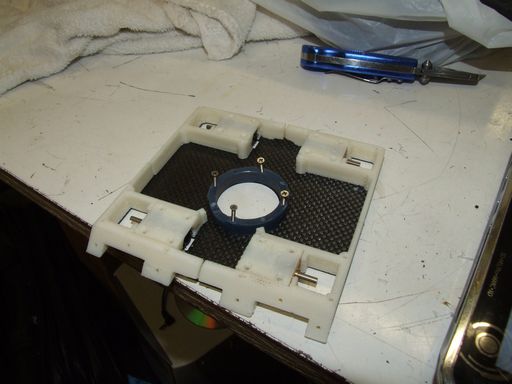 Holy panel gaps. After laying out the frame pieces on the baseplate, it’s clear there’s a small mismatch in boundary sizes. This is probably due to shrinkage of the plastic from the hot build environment to room temperature.Either way, about a millimeter on all sides will need bridging with epoxy, thick CA glue, Goop, or some other substance.

By the way, this is the last good picture for a while. For reasons I can’t fathom, my usual camera has now decided to take pictures only in the ultraviolet spectrum (that is to say, mostly black with some odd color patches on normally brightly colored objects). So I currently am split between using my HD camcorder as a camera (something it is surprisingly terrible at) or doing it up Jed-style and using a cell phone camera. Most of the build from here on will use the latter option, since it’s portable and with me most of the time anyway. 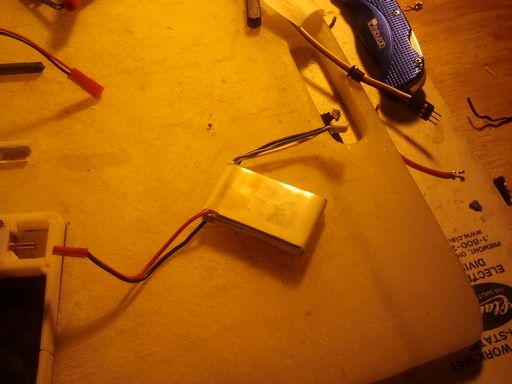 Horrible picture #1: redoing the battery pack. I neglected to bring Pop Quiz’s anticipated battery, a 500mAh 2S from Hobbyking that is the battery used now in MIT’s 2.007 robot building course. It’s the only small lipo I’ve found with reasonable capacity that is 10mm thick, or as thick as PQ is tall.

I did bring the 3S lithium pack I originally bought for Ballcopter. Not sure what I was intending to do with it, but it was simple enough to knock a cell out of the pack. This 2S arrangement is now also 10mm thick. 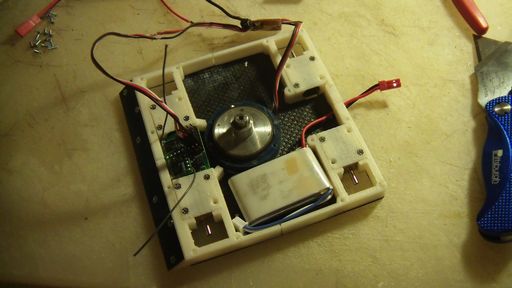 Horrible picture #2, with my HD camcorder (the HD aspect ratio gives it away). This thing has even worse low-light performance but holds a sharper focus otherwise. I’ve decased the Spektrum BR6000 and test-fit it in its final location. That gap width was designed around the internal board, so it’s a snug fit.

The battery lead, also the main power switch, routes through a small cutout in the back. Hopefully it won’t fly upwards and get sniped by the overhead blade. 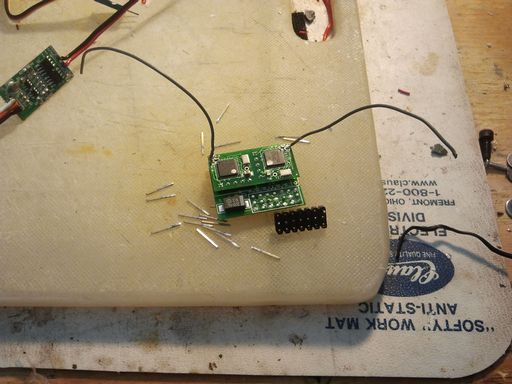 Back to the cell phone camera. That thing seems to have no white balance ability to speak of – the pictures only appear without a yellow tint as in the battery picture if I point it at a blue or green object, like this convenient receiver board.

I de-headered the BR6000 one pin at a time by heating up the solder joint while pulling upwards with pliers. I have never cleanly (reversibly) desoldered male header pins, or any high pin count through-hole component like them. This time, since I was going to hardwire the controllers anyway, I just removed the entire header block. 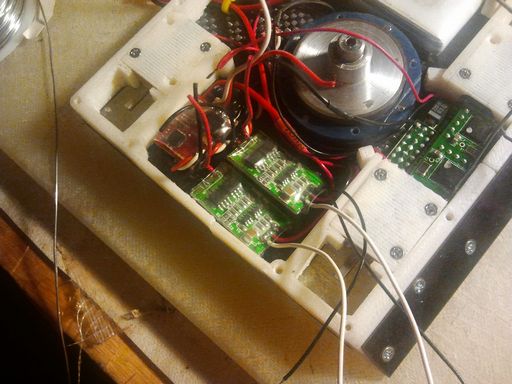 I took the VEX 29 motor controllers out of their cases. They are actually very compact – no more than 3.5mm thick, and approximately 14 x 25mm footprint.

They normally run directly off a servo cable using the 5 volt line. To get 7.4 volts to it, I had to break out the 5V and ground pins separately to the battery, and then solder a signal + ground wire on top of that. The white and black signal wires run off the bottom of the picture, while the appended battery inputs go to the nest in the back of the bot.

I gave the bare boards a wrapping of clear heat shrink afterwards. 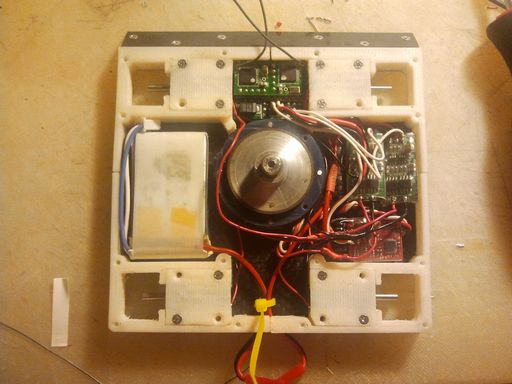 A view  from above with all the wiring in place. The signal connections have been hardwired and everything turns on without exploding.

The Vextrollers do seem to work on 7.4 volts (actually closer to 8.4 volts since the lithium cells were fully charged), making me think that they are actually capable of higher voltage operation. There is nothing on the board which directly indicates they would survive voltages higher than 10 to 11 volts, but it’s worth a shot. Time to put one on a power supply.

The majority of small bots like Antweights and Beetleweights tend to run 2S lithium systems anyway – at only $10 each, the Vextrollers seem to be a great potential resource if that limit applies to your design. This makes them way better than the overpriced specialty robot controllers. 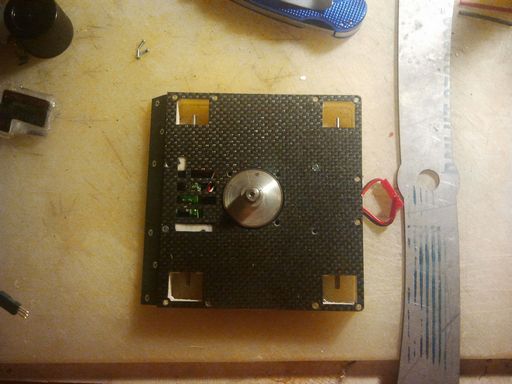 I put the top on for test fitting and to check that everything does pack down. With the top plate’s screws in place, the robot frame is forced to be totally flat again – otherwise, due to the very slight warpage in the frame pieces, the whole thing becomes concave. 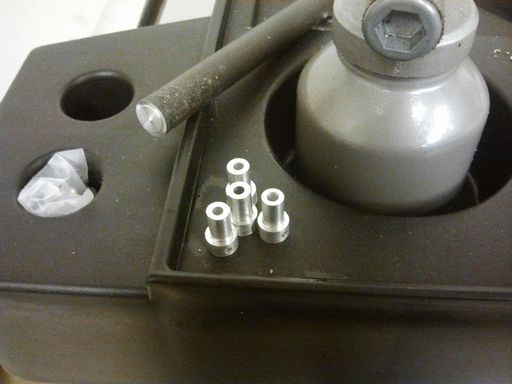 Back at the Invention Studio, I popped the wheel hubs out of some 1/2″ aluminum round stock. This was a fast lathe and mill-facilitated drilling operation since the parts were all small and all the same. 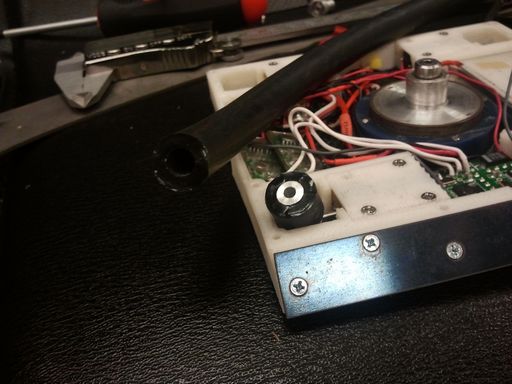 The tires  are some very soft (40-50A) silicone flexible tubing I got from McMaster. The outside diameter is 0.5″, and the ID is about 0.25″ so I turned the hubs slightly larger than that. I’ll probably drop some CA glue onto the joint to really keep the tires on there. 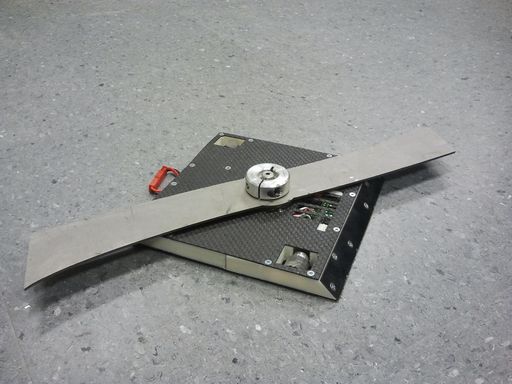 After wrapping everything up, the final bot. The frame pieces have been CA glued to the base and the ‘panel gaps’ also filled with thick CA. The structure is overall fairly rigid, a fact definitely helped by the carbon fiber sandwich design. The final blade height is 0.65 inches.

The bot is definitely underweight – I have yet to weigh it, but since I designed for 4 lithium cells and ended up using only 2, I think its at least an ounce and a half underweight. This might be taken up later on by more steel bits added to the inside.

Otherwise, the only thing I couldn’t find to finish the whole thing and have it driving was tiny 4-40 set screws for the wheels. The blade spins up very quickly, however, and PQ has already successfully lifted off and batted itself once.