My initial goals for Spring Break:

What has actually happened:

Anyways, with the relative success of 0003, I became more or less entranced over designing the next iteration. It was going to look much the same, but feature the internal printing trickery I explored for 0003, so I’m going to not designate it 0004 for now. It also doesn’t help that I bought yet another book on these things.  Maybe by the end of break I’ll actually know how they work so I can find employment building them after completely destroying this semester grade-wise!

The goal for 0003B is to keep the same overall layout as 0003, but make it powered. To that end, I’ve redesigned the nose and body to hold the two 30mm ducted fan units from 0002 and provide real electronics bays. 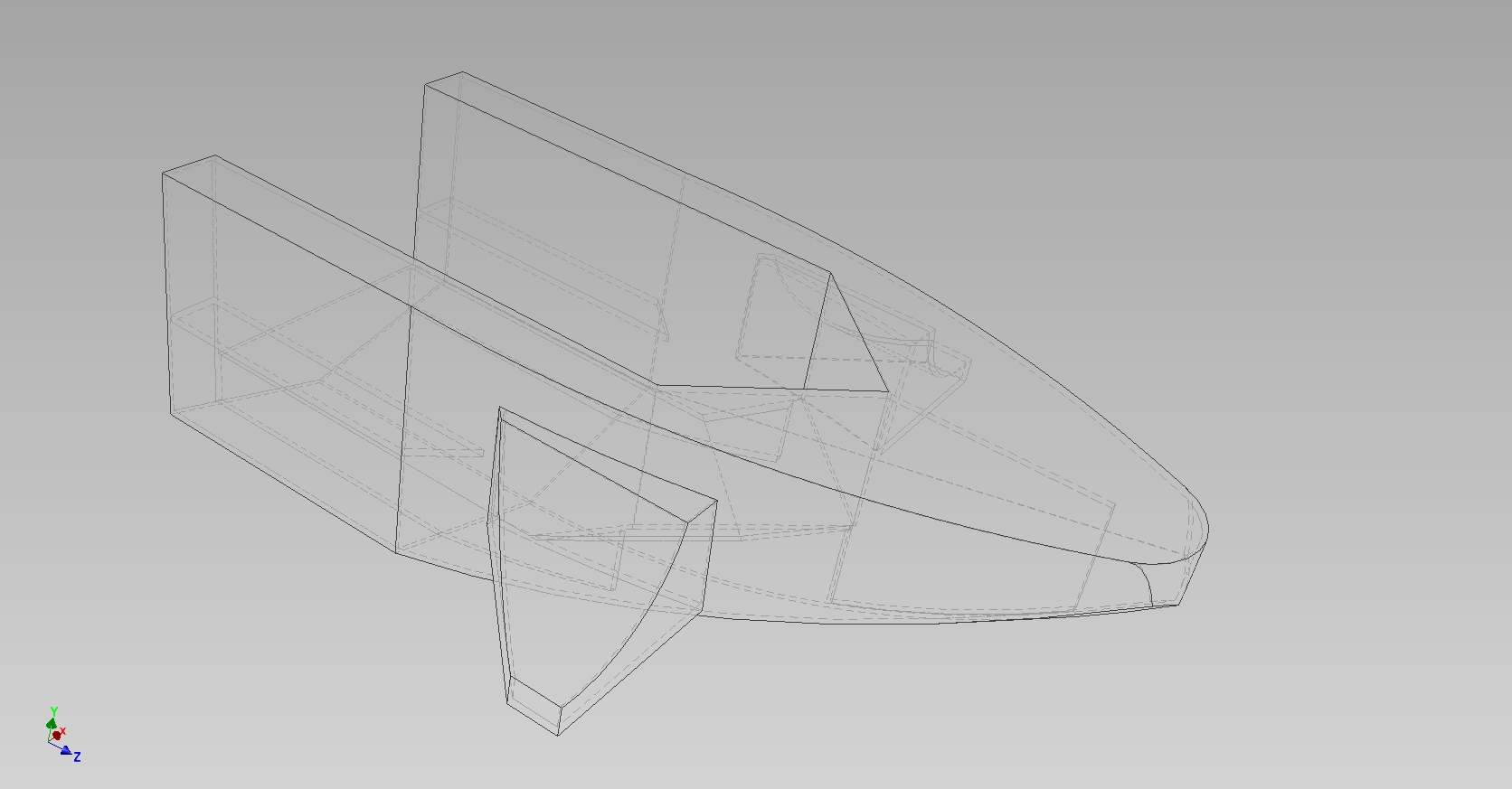 The nose is no longer a fully hollow shell, but now features a network of internal webbing that I guess is kind of like bulkheads and stringers. The Dual Integrated Bus Motor Mounts replace the dumb carbon fiber rod and hot glue mounts of 0002. The weight is still minimal, however. In ABS plastic, this part should weigh half an ounce. 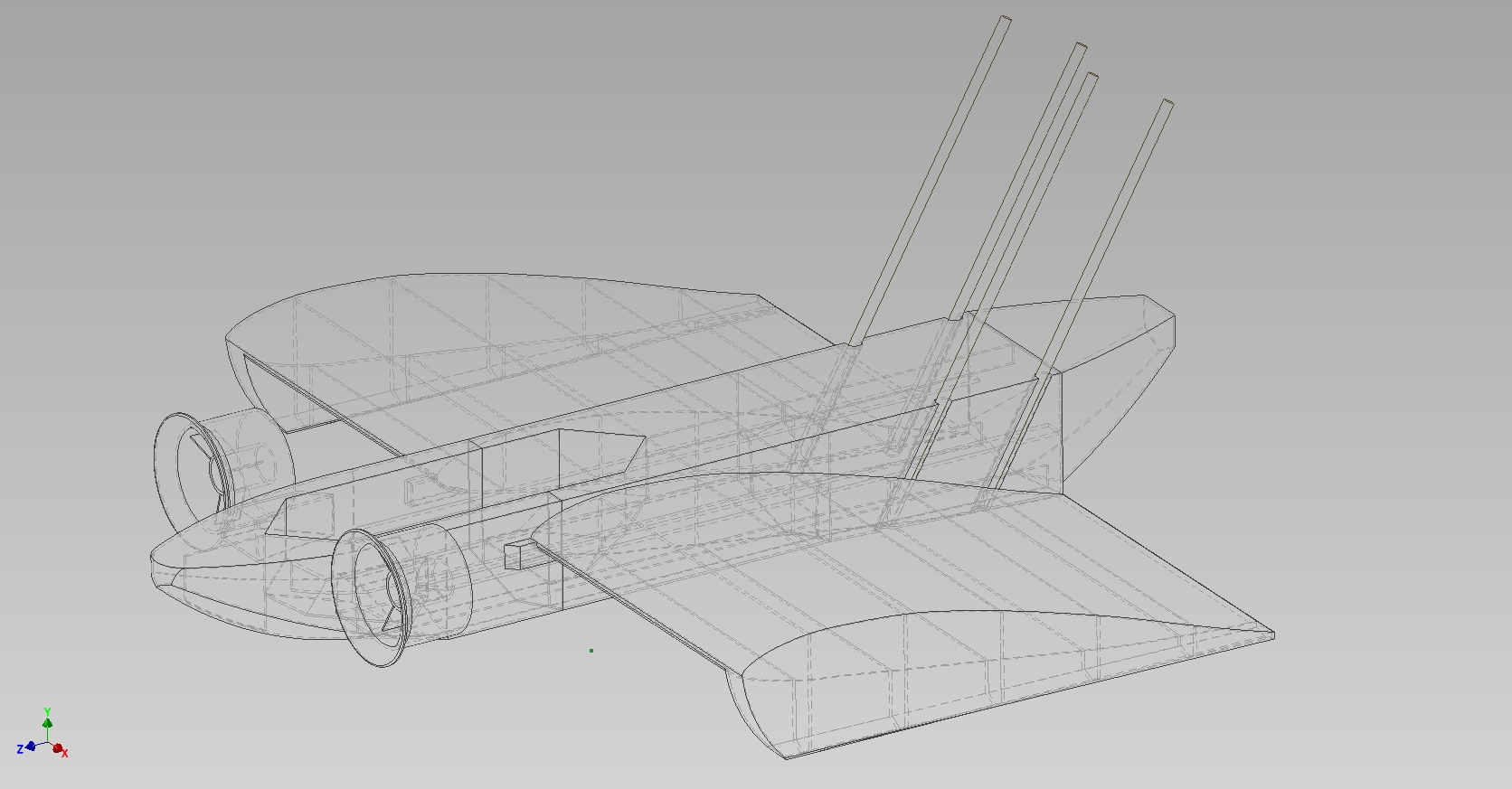 After a few more hours of not paying attention to classwork…

I’ve added more internal spars to the wing shell, mostly to discourage the buckling and warpage seen in 0003’s wings. Note also the “electronics bucket” where I normally put a bubble canopy model. I’ll probably load this up with batteries and then cover the top with a strip of duct tape. Headless but flying Chuckranoplan is better than visually appealing but dysfunctional.

In addition, there’s one more design experiment being applied to 0003B, and that’s the attachment of the tail rods. In previous iterations, I designed the rods to be inserted into printed holes in the body. However, I’ve found that MaB really can’t build a perfect hole at all, and especially not at such a steep angle from the horizontal (printing the holes with the fuselage vertical means 60+ degree overhangs, which without support material, is very difficult). To fix this, I’ve located the rods just outside the body, sitting in angled and rounded channels. Now, the channels route as part of the outer perimeter, which means it ought to be much cleaner. 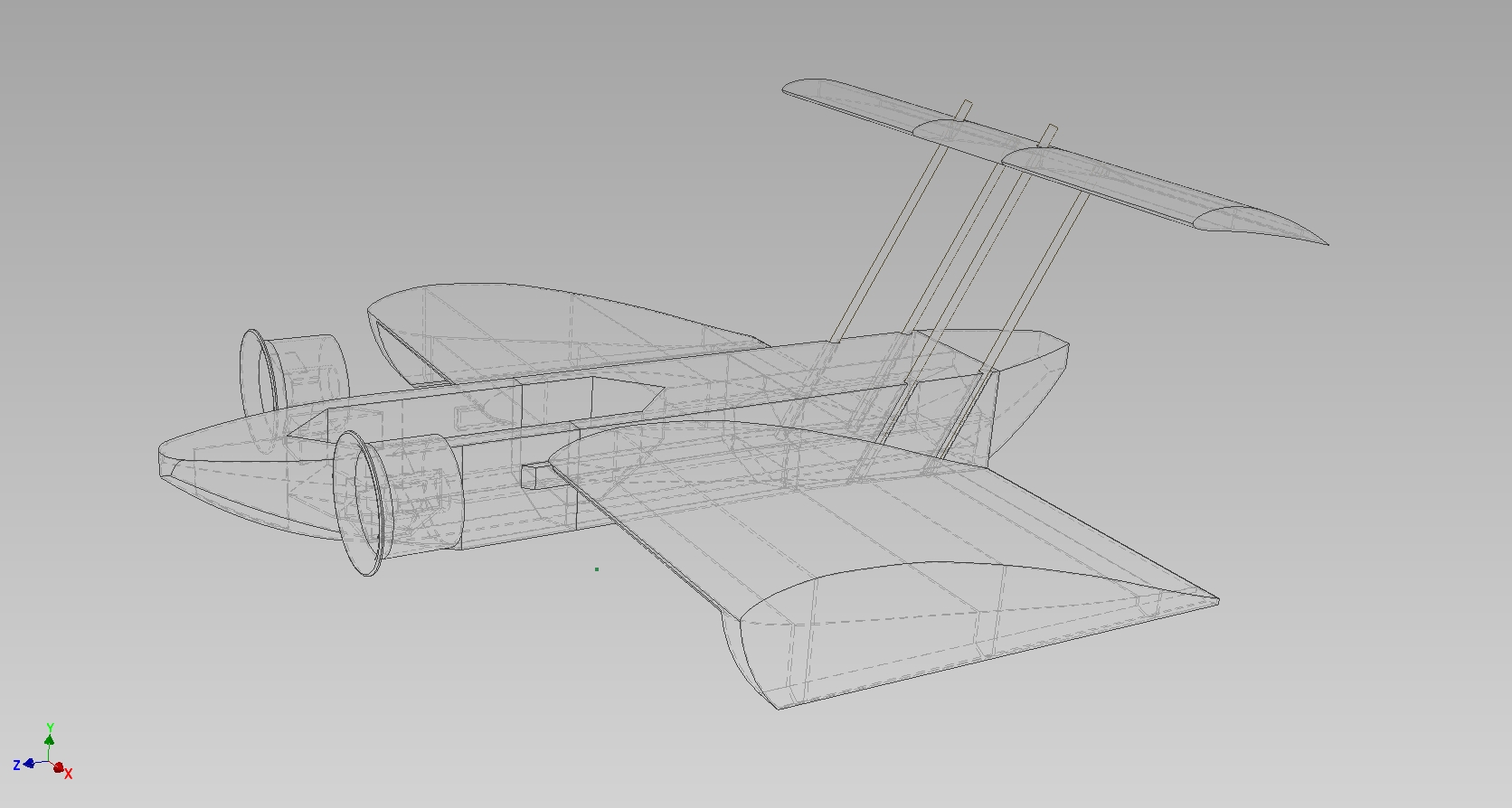 The same operation was applied to the tailplane. The center part, formerly with four through-holes, now has four edge slots. The idea this time is that I can actually mount the center piece first and check the angle before closing the rods off with the end pieces. So I don’t end up with another drag chute tail.

Also note the reduced amount of span members in the wings. I decided five was excessive and added weight which I needed elsewhere. 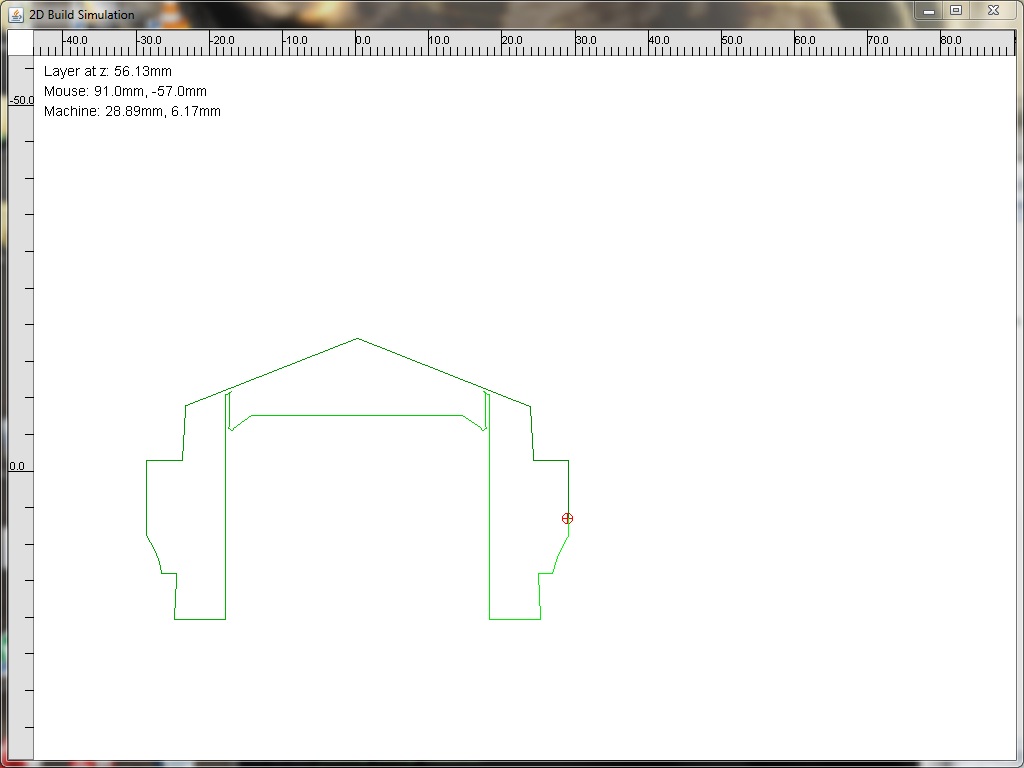 You would not believe how many tries it took to get this picture, since the simulator in ReplicatorG runs at 0.8 Mach. There exist Linux hacker ways of slowing it down, but I’m not in the mood to recompile a kernel, so I just kept recapturing the screen hoping to get a complete profile. And I did, finally. The above is a shot from a test route of the nose portion, showing the outer perimeter (just past one of the fan mounts), the internal cavity, and two underside reinforcement members being routed all as one single-wall profile. Ideally, if MaB just does this kind of thing for an hour, I won’t end up with gaps or thin spots.

One thought on “Chuckranoplan 0003B: What’s probably going to take up the entire rest of spring break…”