There’s plenty in the imaginary part of the update, but you can’t see it anyway. 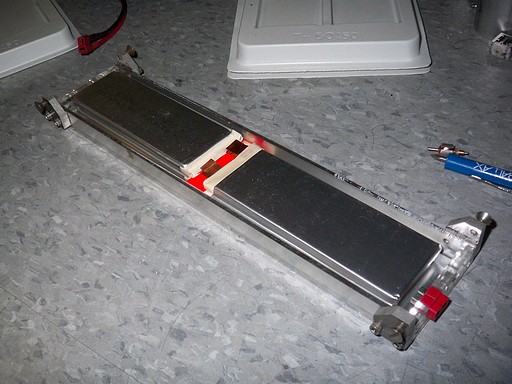 Hey, this thing looks kind of familiar… It’s the extend-o-pack, with 4 4000mAh lithium polymer cells in place. No, they’re not shorting on eachother, despite the precarious appearance of the tabs.

The Deans connector cutout is a snug fit and should hold a female Deans in place firmly with some CA glue. I need to remember to undersize slots and holes for the LASER cutter by a few thousandths to account for its kerf (since it cuts on the line).

Here’s how it was built. 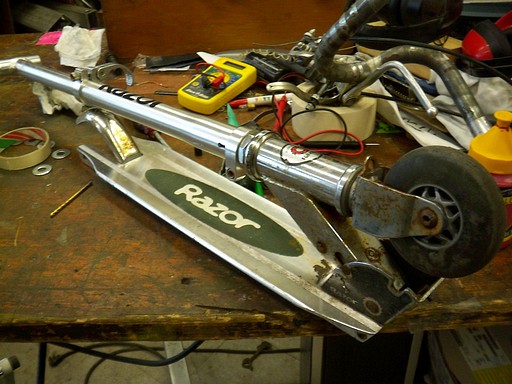 This is sacrificial vehicle #2, another junked scooter that was sitting around MITERS. I’m not sure if it’s an older generation or what, but there are quite a few structural differences compared to the new A3 model I’m converting. It’s certainly beefier in the folding joint (0.1″ formed steel plate!) and brake area, and there is more material in the chassis.

Efficient re-engineering or corner-cutting?! The world may never know.

The plan is to cut a 12 inch segment out of the chassis and use it as the extend-o-pack body.

After a trip to the bandsaw, this was what remained. It was much like partitioning a fish for cooking – remove the tail, remove the head… 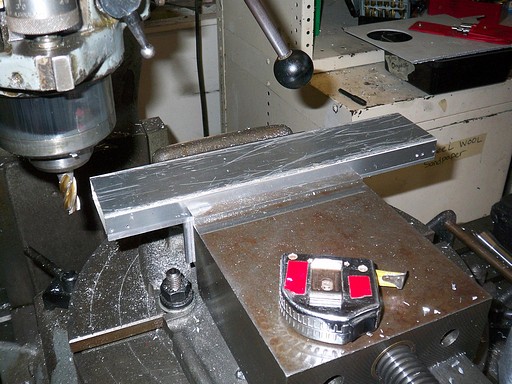 …and clean the middle. Oddly enough, with the parts that remain, I could make a very innovative vehicle.

Here, the side flanges that used to form the upper deck have been milled off, and in a previous unpictured operation, the mounting ear holes drilled.

It might have been better to mill with each flange facing upwards, since the cutting head is always at the same height as the vise above the table, but the vise might not be aligned with the table axis. I tried centering it in as well as I could, but across 12 inches of travel there was still .003-.005 of deviation, enough to have a flush-cut flange at one end but a very light remnant of it at the other. 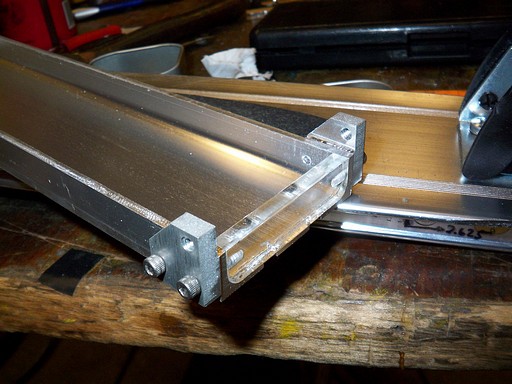 After trimming the flanges off, I milled the remaining channel down to the design height of .606 inches, which is just enough to clear the two cells with some breathing space above. I did this in order to minimize the ground clearance hit – these things aren’t known for their great terrain ability, and I was only going to make it worse by sticking batteries under it.

Here’s one of the LASER cut acrylic endcaps installed. They are retained by some drops of CA wicked into the cracks between acrylic and aluminum and one screw on each side.

The waterjet-cut mounting ears have also been installed. It turns out I was off by exactly 2mm on the width of the channel, so dumping all 4 blocks in the same vise and running an endmill through at 1mm solved the problem and made it a slip fit onto the bottom of the chassis. 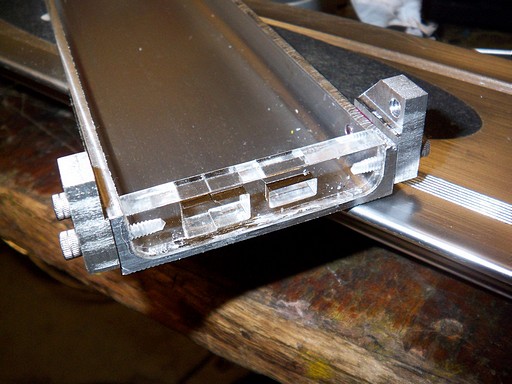 The other endcap with connector cutouts! On the right side is the last leg of the height-trimming cut where the milling cutter went Z-axis Tokyo Drift on me and ended up slipping lower. Oops. Crank the drawbar a bit harder next time?

And here it is installed. It actually looks quite elegant, with the exception of the other side where there is a small gap from the milling cutter slipping.

This whole assembly slides onto the chassis tube and the mounting screws grab the small flange on the underside to hold it in place. There’s lots of potential for “slide-on accessories”, actually.

So, with my Maxamps order on the way (two more cells to fill in the insides!) I need to get going and design the internal mounting structure. I suspect that it will also be a “slide-in” thing, but from the front – mounting via the four holes at the front.

It’s getting EVEN CLOSER! Holy crap, it might actually MOVE soon! I took the opportunity of a convenient gap in the schedule to get some more work done. The motor and drive (okay, so it’s one unit) is mounted, and pretty much now the only thing missing is electronics. And the battery bay – because despite my best machining abilities, things still take a while. 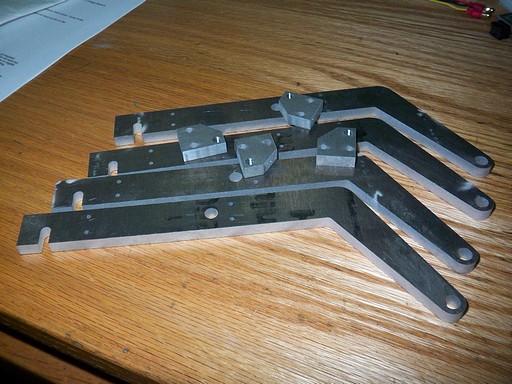 The motor mounting & structural & electronics bay mounting rails. These are waterjet-cut out of a sheet of 2024 aluminum. In fact, it’s the same sheet I had TB4.5SP1‘s wedges made from.

There are either 2 or 6 mounting points for the assembly, depending on how ambitious I feel. The quarter inch hole in the center of each beam clear 1/4″ screws to mount the motor between two of them (I cut four, in case I somehow fuck up twice). The 3/16″ slot at the front of each beam latch under the bolt which holds the brake fender in place. Overall, the assembly should only need those two (four) mounts, but I also have 4-40-tappable holes in a rectangular arrangement if I feel the need.

The small chunks are the mounting ears I designed for the supplemental battery pack. 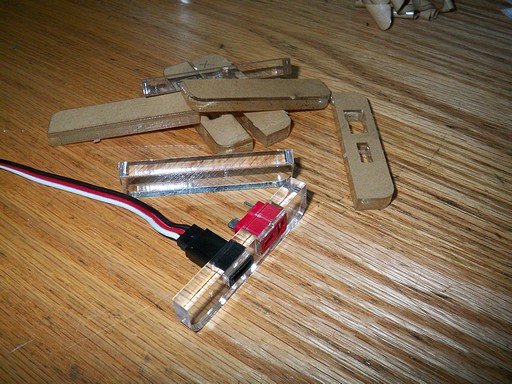 Additionally, I GIANT LAZER’d some acrylic endcaps for the supplemental battery pack.

WHAT? CHARLES USE ACRYLIC?! WHAT HAS COLLEGE DONE TO HIM!?

Well, it’s not a particularly structural application, and plus the Media Lab laser cutter does not have a proper ventilation system for handling the cyanide gas that burning polycarbonate can produce. Also, the waterjet would have left a nasty draft and clouded the edges.

So why not. It’ll glow better. 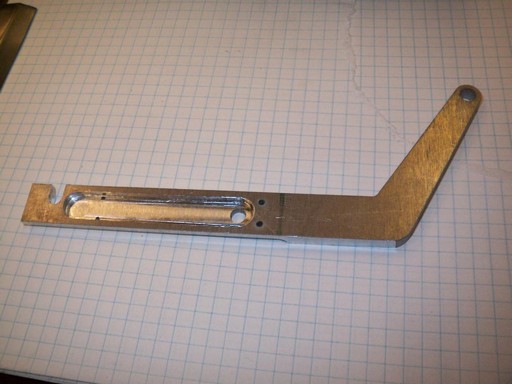 Additional machining was require for each frame rail thing. First, the mounting hole had to be counterbored 1/8″ deep at 1/2″ diameter to accomodate the motor. I could have done without this, but extending the motor shaft gave me a critical few more millimeters to run the wires out without squeezing them. Here, on the right side, the counterbore is “extended” outwards away from the wheel. The three motor wires will sit in the hollow until they pass in front of the wheel. 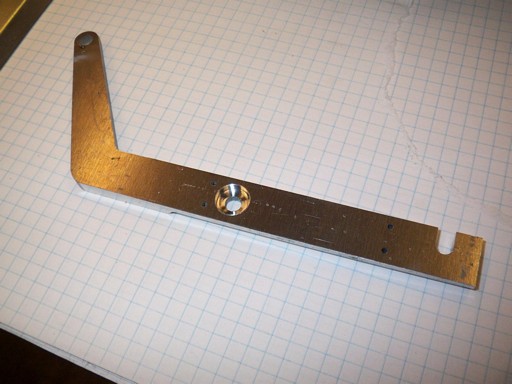 Compare to the left, which only needs the dimple to seat the motor shaft. 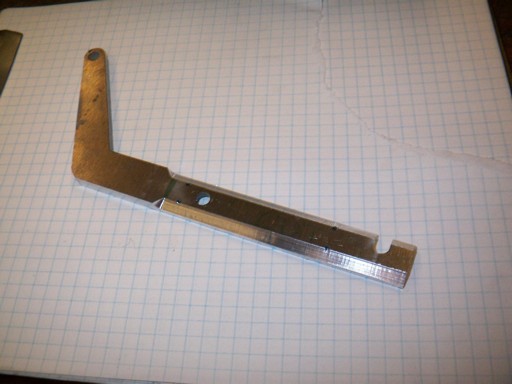 Next, each rail had to get a chamfer machined on its outside-facing edges. The interior of the Razor scooter’s chassis extrusion has a radius of about 2mm. I cannot duplicate this precisely, so a messy one-size-fits-all chamfer takes care of it.

Because I had no dovetail orÂ  real chamfer cutters, I milled these chamfers with a countersink. 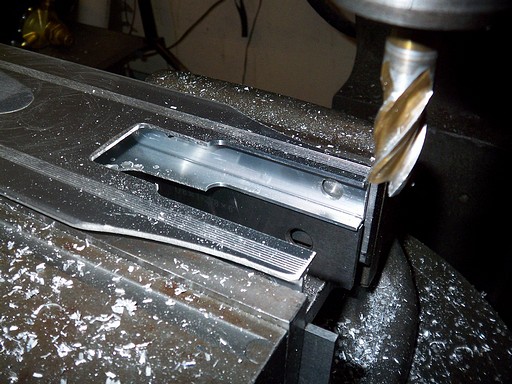 Next, the back end of the chassis extrusion had to be opened up to ~42mm wide, from the 33mm stock. The width of the motor is 40mm, and I did want some play on each side. 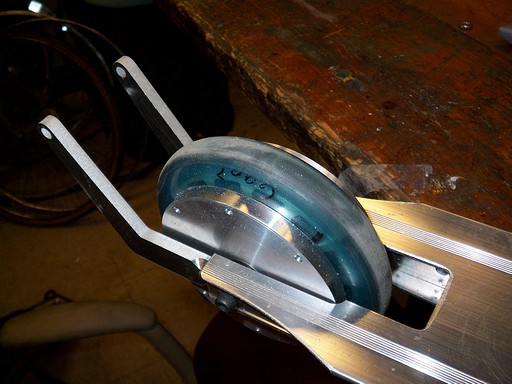 And hey, it’s mounted. I had to shave down the waterjet edge draft on the rails before they fit properly, but that was trivial to do on the mill. The motor slips into place and bolts down with no fuss. Best of all, it’s smooth.

Really smooth. I took the thing for a quick test cruise, unpowered of course, down the hallway. It makes the same obnoxious 3-phase PMDC motor sound, amplified n-fold by the waveguide-shaped chassis.

Here, the brake has been removed along with its retaining bolt, which would normally cross the gap and mate with the latch shape in the frame rails. 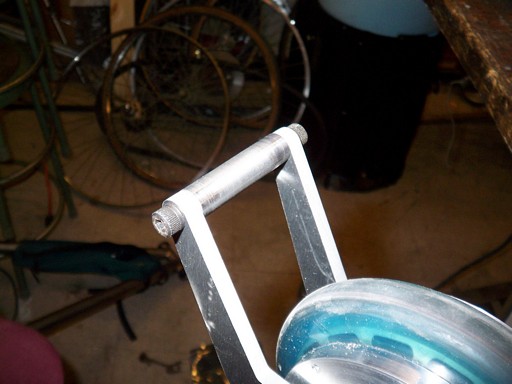 While the machines were warm, I turned a new standoff & wheelie bar for the back end. I could have just shaved down the stock one a bit, but I left it back at my dorm room.

It took about as long to find a piece of 1/2″ aluminum, shave it down to 11.5mm, drill and thread both ends, and throw it on there, as it would have for me to go back to campus, dig it up, and return, only to throw it on the lathe anyway. 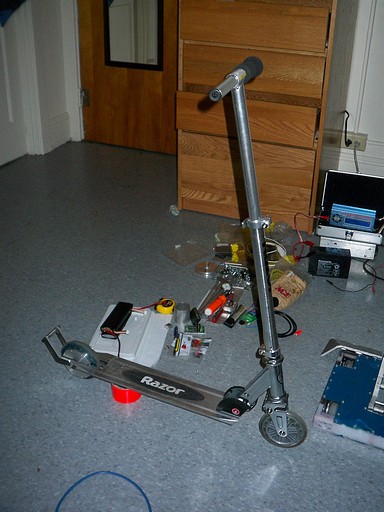 So here it is, sitting amongst my random stuff pile. I need to design and build the electronics bay (internal) and the supplemental battery pack (external), then wire stuff up. Oh, and order two more 4AH cells from Maxamps.

I did ride it the whole way back (yes, with no brake… who needs ’em anyway?), and threw some durability tests at it in the form of bunny hopping off sidewalks, wheelieing, skid-stops, and purposefully riding over stone-paved paths and cracks. Nothing has let loose yet.

At this point, I can make a duct tape test rig similar to what I did with Beta 1. Maybe I should do that just so I don’t have to get my hopes up…