That’s it! The event is over once again. If by my lack-of-enthusiasm-induced time delay is any indication, I didn’t win anything. The robots performed about as much as I would have expected given the effort that I put into them this time around (read: like none). In the antweights, Unmodeled Dynamics…no, that’s not the name of a robot, though it could be… ended up causing Pop Quiz an early loss after winning one match. And in the 30lbers, Überclocker proved to be a little behind the times now in terms of speed, ground clearance, and maneuverability, winning only one match.

I didn’t even get to twirl anyone this time around. That is how bad it was. No con pictures this time either, since I really only stopped in for some of the Robotics and Science talks and otherwise didn’t have a good enough camera to feel like taking pictures of people. Also, without a consistent videographer this time, I don’t have complete video of both robots’ matches. So, no highlights video just yet.

The events, though, were phenomenal. The insect-class event ended up attracting 36 entries – 19 beetleweights and 17 antweights. This makes it the largest insect-class event on the east coast so far, and many of the robots were from new builders. Because of the number of entries, though, the tournament had to be converted to single-elimination (historically has been double-elim) to fit in the given convention time slot.

As the testing session video reveals, Pop Quiz has a slight “sudden unintended takeoff” problem stemming from the frame’s flexibility and the low blade height. I’m interested in seeing this under some serious high speed video equipment because the development takes milliseconds. I’m guessing the combination of robot movement, slight nonplanar mounting of the blade axis (due to floor bumps or varying wheel instantaneous heights) causes gyroscopic forces to flex the motor mounting area, which because of the very low blade clearance causes it to strike the robot corners. The blade then quickly destabilizes and hits the ground due to the bot’s very low height.

Either way, sort of annoying. There’s nothing wrong with Pop Quiz right now. It in fact works just fine, so I’ll probably retain it as a demobot. However, I’m definitely out to build a better antweight – of what style I am unsure of at the moment (but I really, really do want to name it Unmodeled Dynamics)

I have one complete video of Pop Quiz’s second match, which ended in a PopQuizCopter-induced loss.

Oh dear. Where do I even start with this one? Clocker’s now 3-year and 4-tournament record is starting to show – the design flaws of late 2008 are slowly getting worse with time, compounded by my apathy. This year, the stage has pretty much become so damaged (purposefully, since it was historically a good wedge inhibitor) that Clocker was being hung up everywhere. The 2.5″ colsons have worn down alot, so much that I had lots of trouble maneuvering. Additionally, the lack of (functional) chain tensioners resulted in the chain being caught and damaged by the stage surface for the first time. To mend this, I made some quick zip tie tensioners (continuing the tradition of fixing Clocker at an event with zip ties): 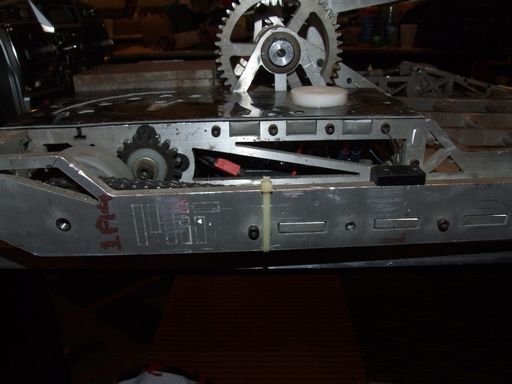 The zip tie wrapped around both sides of the chain and prevented it from sagging and touching the ground. This worked – right up until it caught on the master link retaining clips and ripped them right off. The result was a broken chain in the bot’s third match. By that point, I really had stopped caring and just wanted to continue the show, so I elected to run one-sided (and without the infamous Zip Tie Ratchet even!)

Past that, the robot’s lack of actual forward-pointing sharp things (The ends of the fork are actually fairly blunt) meant that I was easy to get under from the front. Finally, opponents were finally able to take advantage of the bot’s 23 inch long flat broadside.

At least the motors worked this time!

Clocker version 2 (“Remix”) is now retired. I’m going to be rebuilding the bot from the ground up to emphasize manueverability and terrain handling – terrain referring to bumps and inconsistencies in the arena surface of up to 3/4 inch. Yes, this thing is going to have a boatload of ground clearance, will be much faster, and also with more “grabber clearance” so I can latch onto the more irregularly shaped robots. In order to fix the huge broadside problem, the sides of the bot will be rounded like Cold Arbor (it has prove hard to attack from the sides due to its tendency to “roll” into or away from the pushing force).

I haven’t designed out everything yet, but have been making a few “concept sketches”. One of which is below (though it’s unlikely to be used) 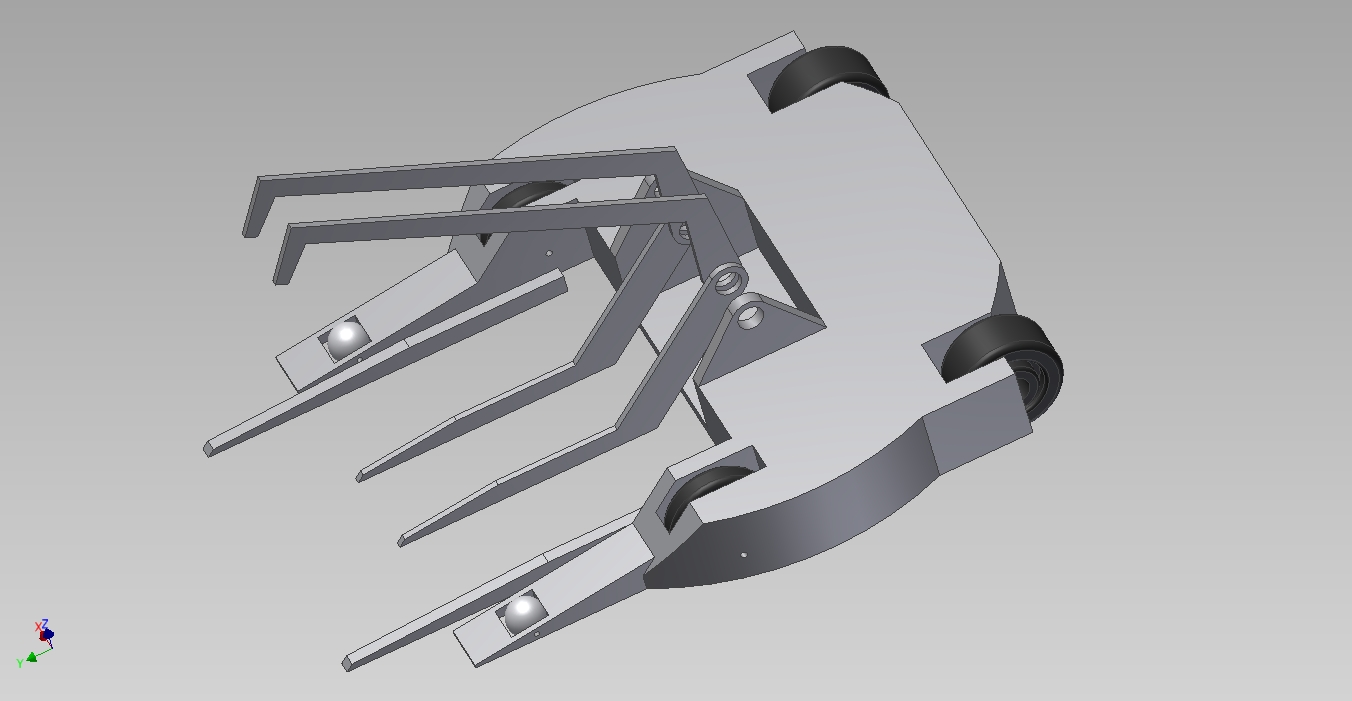 After obtaining 4 set screws, I put PQ2r2 together for the final shakedown test.

Okay, so it turned out to be more of a shakedown than I thought. The blade is just off balance and possibly just tilted in-robot enough to cause the sudden instability and “popping” in the video. To mitigate this, I’d have to spin up just before approaching an opponent.

Because of the missing battery half, the robot only weighs 13 ounces. It’s fairly maneuverable with the four Sanyo style gearmotors and soft wheels, so I hope if it’s too light to be an effective spinner it can still get under people and shove them around.

Microbattles event in about 10 hours!