On Thursday, I finally had to stop freeloading off Amy Qian, and shifted over a subway stop to a less swanky hotel for the last two days. I decided to spend the day roaming the neighborhood and also just taking a break from the last four days of action. I did, however, establish contact with some folks at SZDIY, a makerspace in the western half of the city proper, so I planned on dropping by their weekly meeting on Thursday night.

The first matter of business was getting there. Like many places in Shenzhen (or China as a whole for that matter), it doesn’t have an “address” in the Western sense. Instead, once you get to the neighborhood, you start counting blocks and buildings. They’re located here: 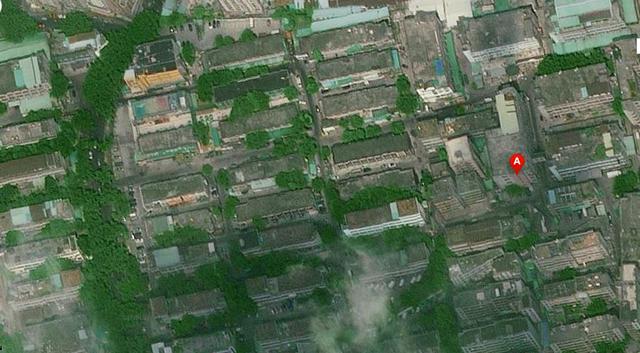 Believe me, those  buildings were hard to tell apart in the dark, and none of the intermediate streets have names or numbers. I just told the taxi driver to drop me off right past the dumpling place on the corner and I’d figure it out. Fortunately, it didn’t take long before our mutual telephone hollering bore fruit. 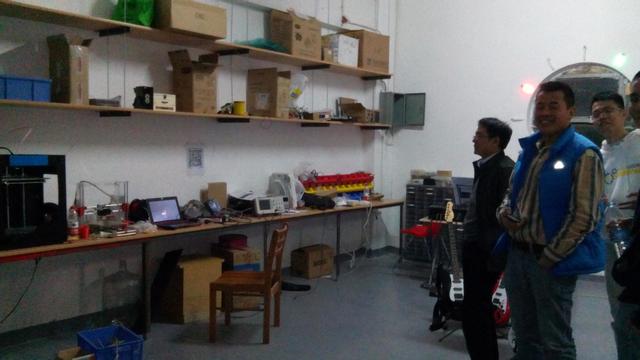 The space is roughly the size of MITERS – about 1500-2000 square feet or thereabouts (what’s that in Cultural Revolution units?), and not packed. Electronics tools and some 3D printers run along one wall, and behind me is a microshop of sorts. About 10-15 members were present for their weekly ‘official’ meetup. 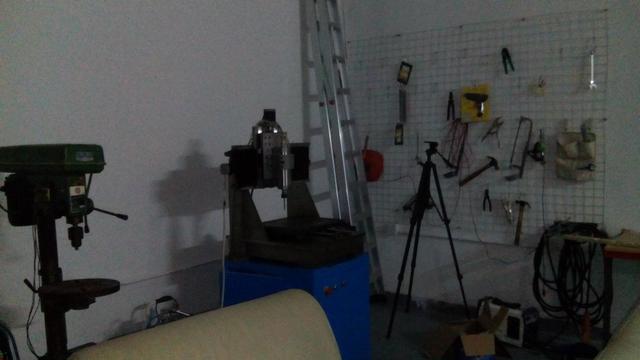 The ‘shop’ portion had some basic hand tools, a drill press, and a little CNC router. Enough to get stuff done, I suppose! On deck in the future they wanted a small lathe (I, of course, became a tinylathe salesman, even though I am not sure if that model in particular is even available domestically). 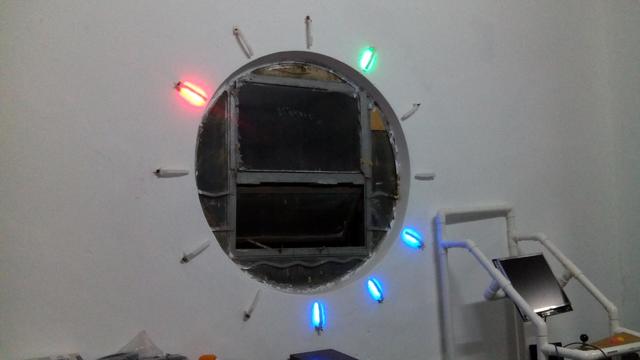 This pretty sweet analog-ish clock made with LED bars adorned one wall. I was immensely curious about that window – the space came that way, so naturally it had to be made the centerpiece of something… 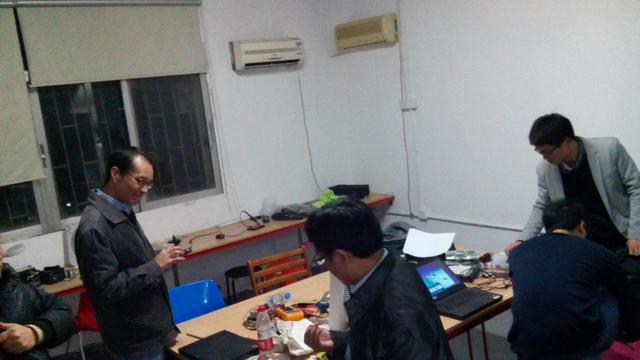 A conference room with additional bench space budded off to one side. 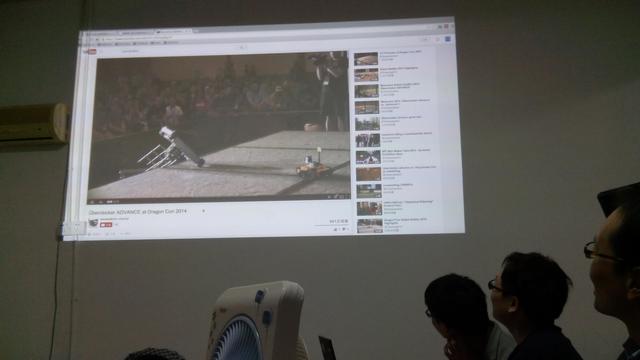 I was apparently made the main attraction of the night, so I gave a very brief presentation/shit-shooting session about the stuff I’ve done and tried to answer questions. This was probably the most Chinglish I’ve ever spoken.

Luckily, the majority of the members had taken English classes in school (kind of like how U.S. students have de-facto taken some Spanish or German classes – you won’t be conversationally fluent, but you get the drift), and many technical words don’t have convenient Chinese equivalents, so I got by on live Google Translating, asking people what some specific term is, or just saying the English and hoping the meaning carried on through context.

I don’t think what I did even qualifies as code-switching. It’s more like crude duct-taping together of two languages, a translator, and wild flailing and gesturing.

Nevertheless, people found it very entertaining – robot fighting videos were a huge hit overall. As usual, I left some links and my contact info should anyone have questions.

On Friday, I was planning on returning to Huaqiangbei for a final sweep-through, but apparently the stir-fried rice enoodles I had from a local street corner eatery in the hotel area was just a little too hardcore, and I spent all of Friday out of commission. So sadly, my shopping adventures ended there. Maybe this actually saved me a substantial amount of money…

Come Saturday, it was time to hit the high-speed rail to Beijing. China’s HSR network is brand new, fraught with corruption charges, forced village demolition and evacuations and questionable workmanship, but they shipped it. It’s a network which is still being expanded. 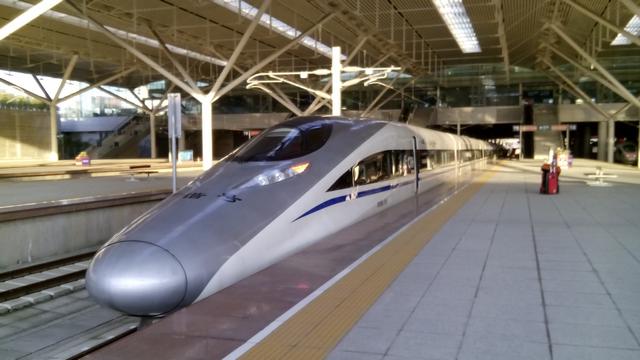 That’s a CRH380A, and since I’m writing this, it did indeed get me to Beijing in 10 hours and didn’t fall off a bridge somewhere. The ride the whole way was very smooth and comfortable, and since the trip was during daytime, I not only got to see the city cores and suburbs the track viaducts passed through, but also a good look at the countryside.

Oh, by the way… On the way out to the train station, I passed through a mall which had these for sale. 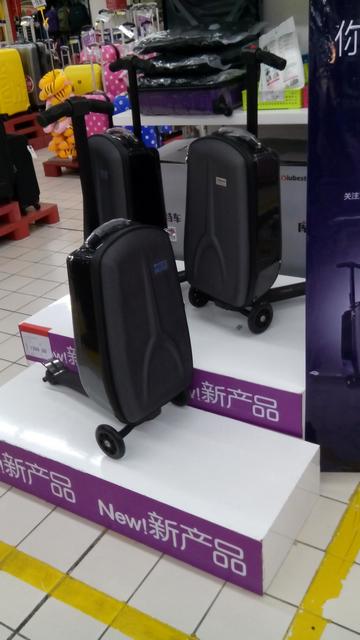 Believe me, the urge to buy one on the spot and trade in my distressingly non-motorized luggage was strong.

I’ll likely not have that much to report in Beijing, but I will make sure to visit the neighborhoods which had strong hardware presence in 2007 to see if they are still around. Many have been the victim of urban core redevelopment in Beijing. I’m also trying to see if I can bust into Tiertime (makers of my favorite small 3D printer, the Up) and trying to poke my contacts in the engineering department of Tsinghua University.

Guys, I found the local Mexican place. I can officially just settle down here now. 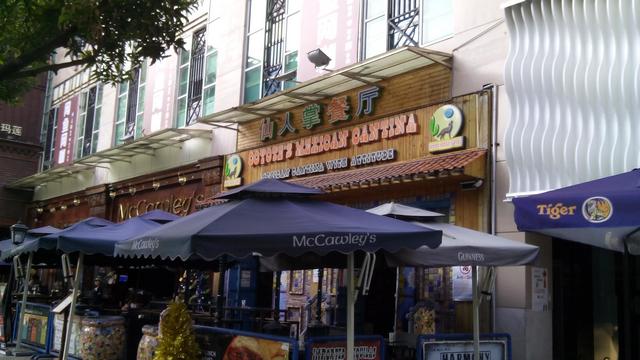 It wasn’t bad – at LEAST Taco Bell grade (and I hold Taco Bell in moderate repute!) but like many Western food options, is much more expensive than a noodle shack – three tacos here cost me about as much (converted back to USD) as if I just hit up Beantown Taqueria back at base.

Tuesday and Wednesday’s adventures involved some sightseeing. Not the touristy kind (is there such a thing as ‘industrial tourism’?), but visiting the facilities of a well known maker-oriented company – Seeed Studio – as well as that of a small vehicle manufacturer. My favorite!