In less than a day, I’ll be setting out for the Detroit Maker Faire on a cross-American vans-on-vans adventure (just like last year!). Detroit tends to be the biggest race in the Power Racing Series, and we’ve even been told that the pits are entirely full due to a spate of late entries. This will be interesting.

Partially contributing to that lack of pit space problem is us. For this time, I’m taking on the role of cargo freighter and transporting all four entries built in-or-near MITERS (which will have their own documentation linked here when they make it… *ahem*, people.).

Something something single point of failure…

Anyways, the four Boston-based entries from us are:

Last time I visited Chibi-Mikuvan, I had already printed some potential steering component candidates on the MarkFrog machine. Recall the explicit goal of trying to 3D print the entire new front steering assembly using the continuous-fiber process pioneered by MarkForged, just because. The biggest print of all is the steering bracket: 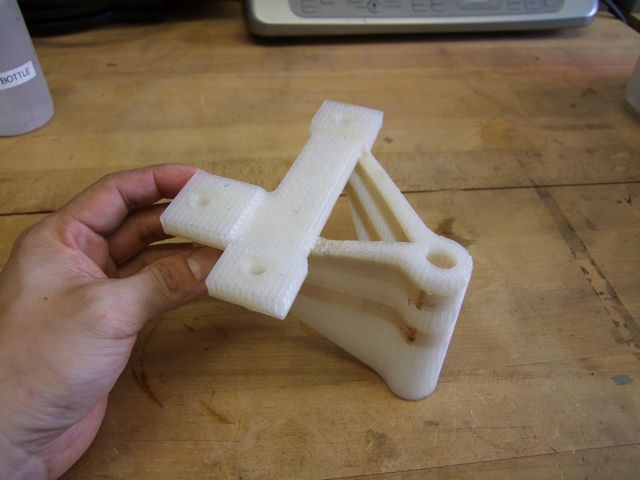 This thing takes a whole 2 days to print, and has two large bands of fiberglass (which is what takes so long – the fiber lays much slower than plastic extrusion). It also has a mirrored version. 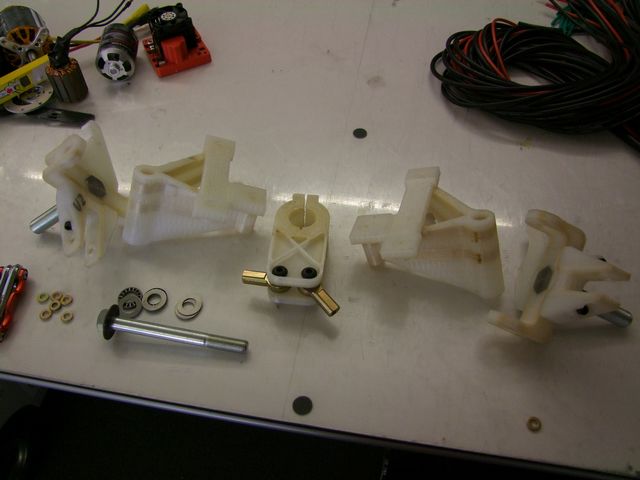 Here’s all of the finished steering components ready for assembly. I’ve already combined the three individual parts that make up each steering knuckle. 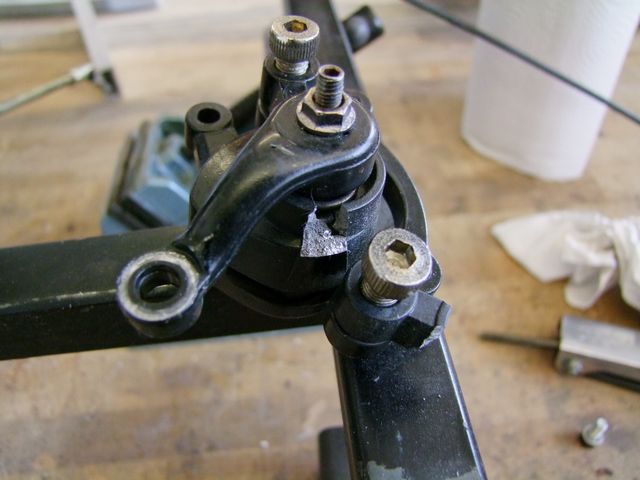 While I was dissecting the old steering setup, one of the brake calipers basically crumbled in my hand.

Well, sure glad I found it now… I’m wondering when it became this way, since I don’t recall hitting anything after New York Maker Faire and I noticed no braking weirdness at that event. 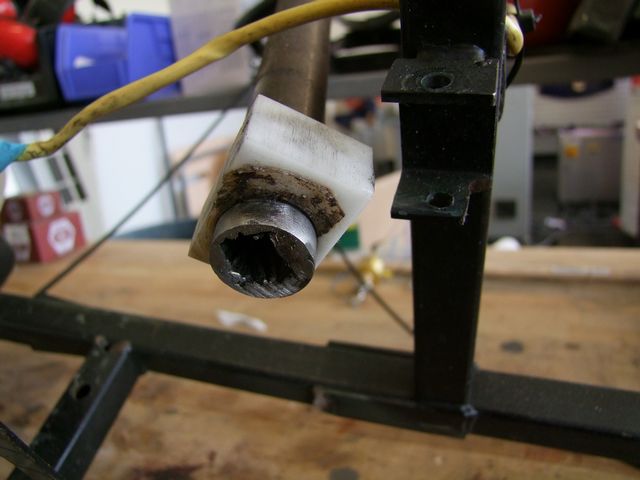 I cut off the crudely splatter-welded Pitman link from NYMF to install the new 3D printed version. The heat of welding caused some melting on the Delrin steering column support, so I flipped it around to expose the other side instead. 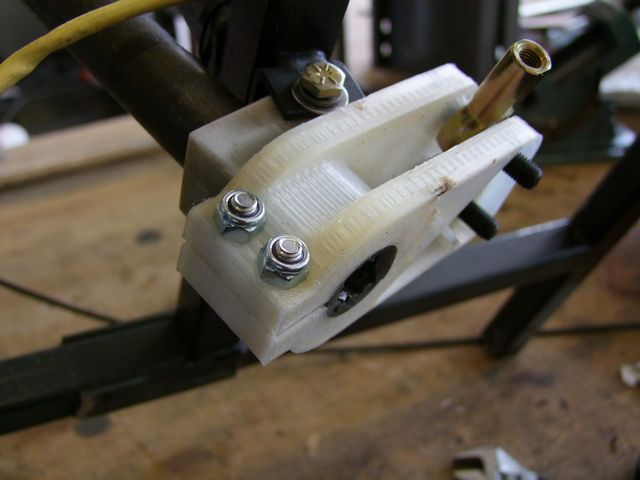 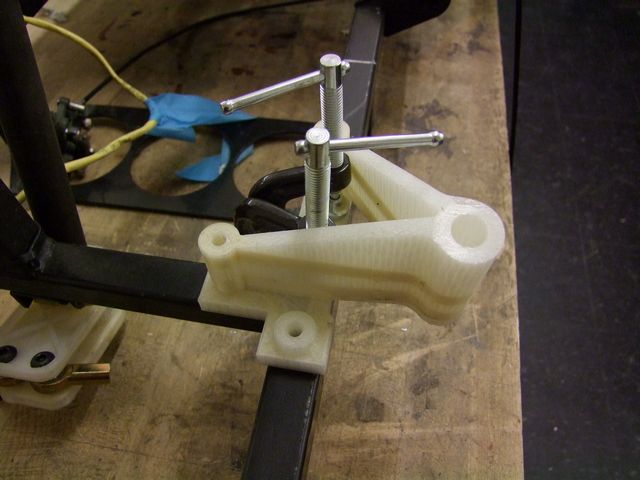 At this point, I had already locked myself to this solution in some way by cutting off the old bracket. 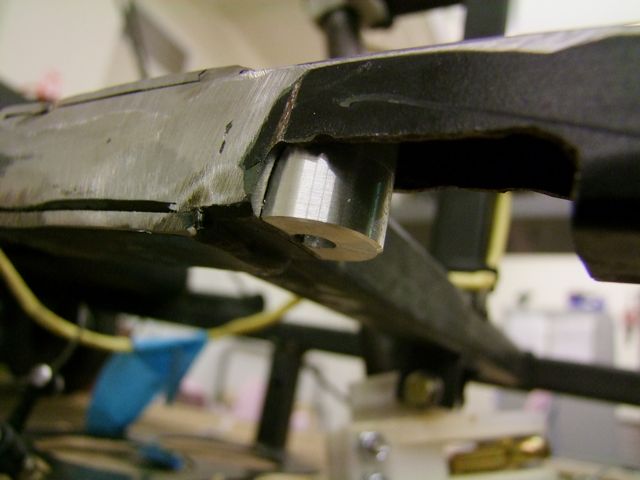 I had to make a quick spacer to bridge this section of the frame, which I had to cut away at the beginning to clear the right tie rod. 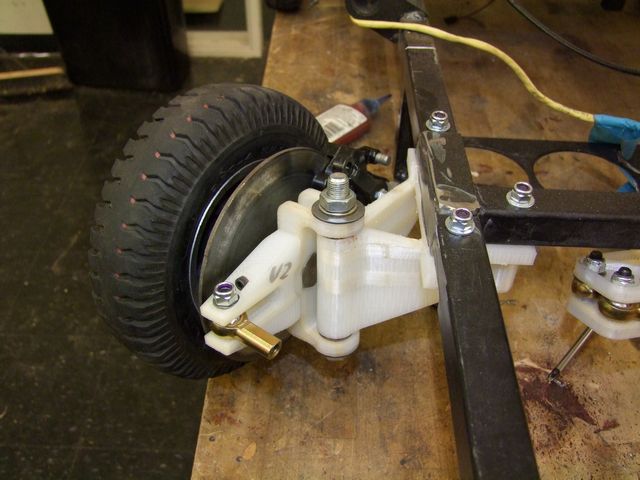 Components installed and tightened down. Because of the flexible nature of the plastic (compared to solid metal), locknuts are used everywhere. Non-lock nuts would eventually work themselves loose from the plastic moving.  The version numbers on the parts indicate which revision they are. 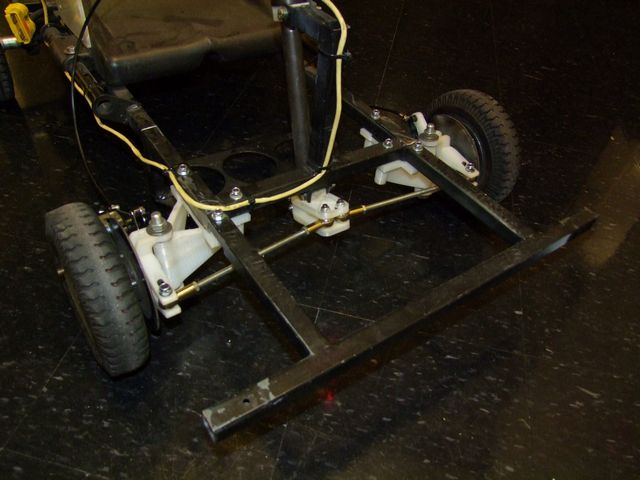 Time for the jump test…

This system of components is…. very flexible. Not that this is inherently bad – plastic will inevitably be more flexy than metal. But what I noticed is that the two fiber bands separated by some plain nylon basically makes an A-arm suspension. A very unintentional one. The maximum camber can be described as “drastic”. 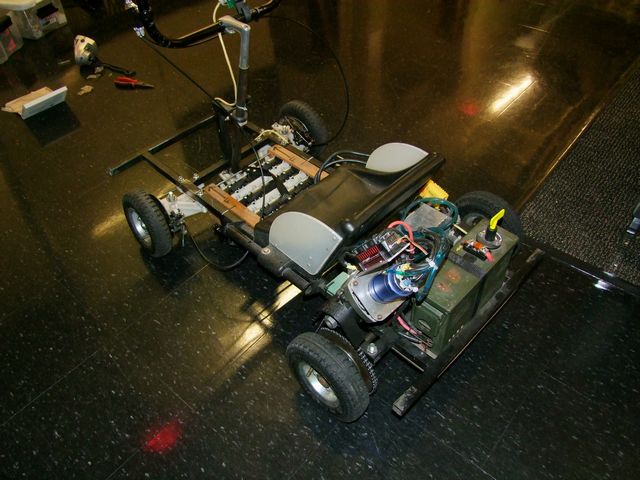 Anyways, it was time to put together the rest of the system again for a dress rehearsal & test. The goal is to run up and down one of the back streets behind the building, trying to hit every pothole and every utility access cover thing on the street, and run up and down the parking lot curb cuts several times.

To get everything back to working order, I had to refill the water cooling loop. I took the opportunity to apply eye-embedding clips (so called because they will aim for your eyes when they inevitably slip off your pliers) to the small fittings, one of which came loose during our winter shenanigans. Basically, making small reliability fixes for known bugs.

I also cycled the battery packs a few times to check the capacity. I intend to build a 3rd battery to ensure completion of the endurance race… we’ll see if that happens. 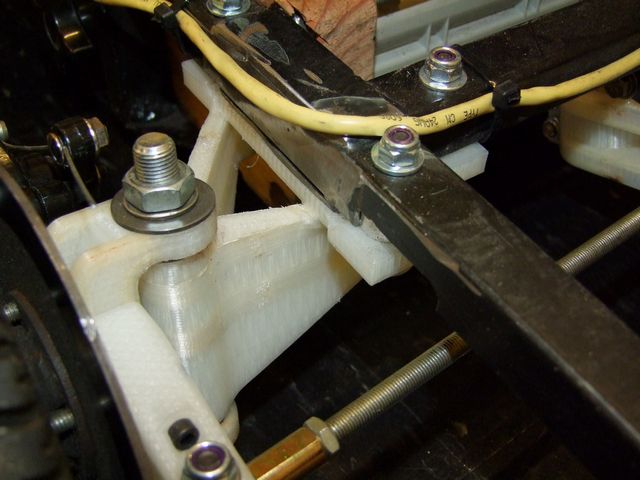 The testing eventually resulted in the right side bracket buckling where the fiber becomes unsupported. It’s a soft fail – it simply manifests as more and more camber. The failure mode is buckling of the internal truss structure. If I had an additional element coming up and bracing against the frame, it would be much more sound. For example…

Like so. Here’s version 2 evolving out of solids. The front arm is much thicker and joined to a riser which braces against the frame to prevent rotation (which would result in moar camber).

The final version 2 with mounting bosses and fillets. Instead of 2 discrete fiber bands, this one will have a single band that is uninterrupted for approx. 35mm

Unfortunately, it was Tuesday. 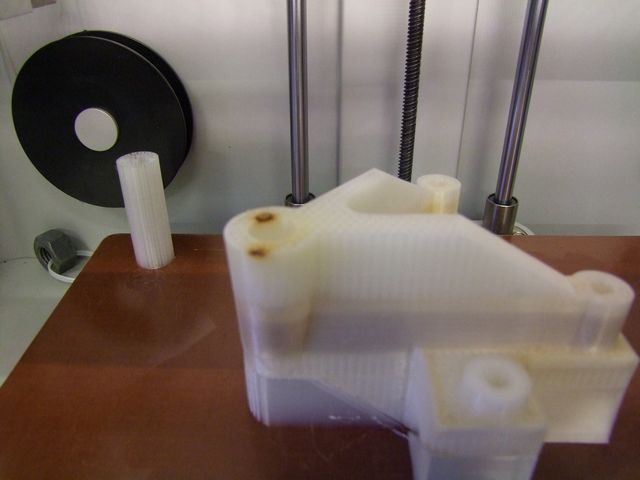 The 3D printing gods did not smile upon me this week, with the Mark One stalling for unknown reasons at 75% completion. Check out the two nozzle burn marks!

Well, with each piece taking 2 days 8 hours to print, there was no chance of being able to get a set of these for Detroit. Nevertheless, I still had the printed steering knuckle parts, so the mission is not lost entirely.

It was time to…. well, un-cut the frame, I suppose? With a big enough metal 3D printer….

I designed “Bailout Bracket” in a couple of hours. It replicates the geometry of the 3D printer bracket, including the 10 degree caster angle, and is designed to be made entirely out of some leftover tube stock and 1/8″ steel plate, tabbed and welded together. 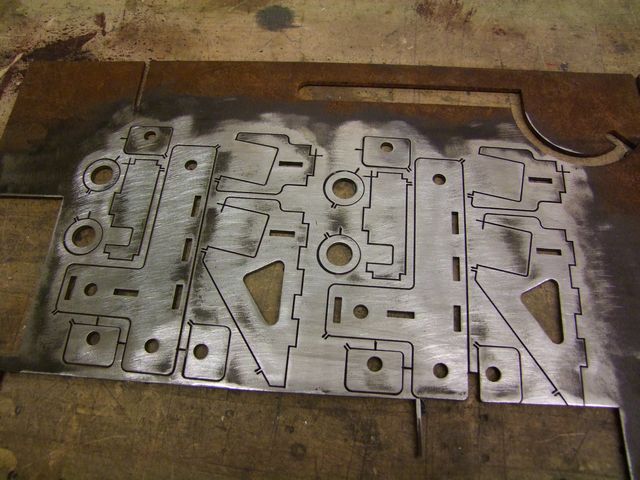 Cleaning up the surface of the whole sheet of cookies at once after waterjet machining the next day. 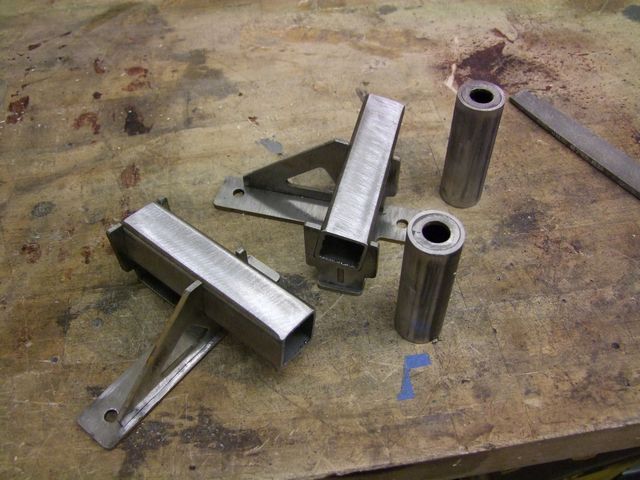 Here’s how the structure goes together. The finger joints fall into place and the materials interlock – really all I need to do is tack everything together along the tabs. 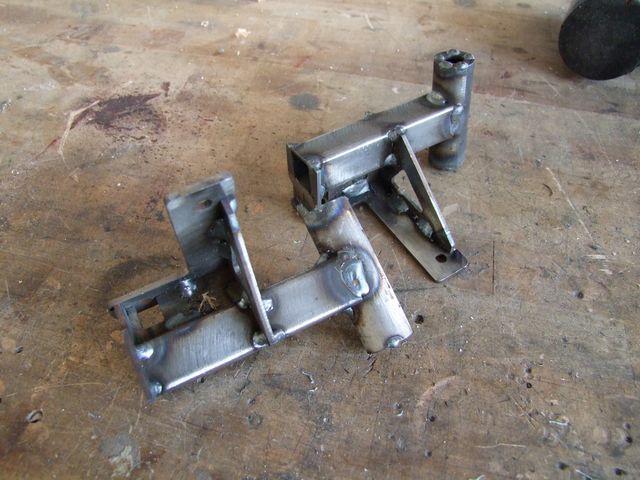 Which is precisely what I did.

Now, looking at this, is it objectively worse to 3D print your go-kart steering parts, or have me weld them? 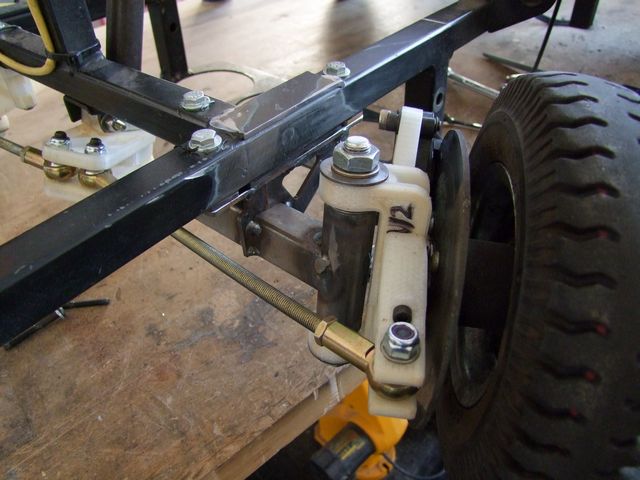 I also took the opportunity to swap the version 1 knuckle to version 2, which reinforces the area around the head of the bolt some more. Not that it was necessary – I’ve been more concerned about the 5/8″ bolts embedded in the steering knuckles slowly deforming that area, but it’s actually been remarkably solid. In this case, having the whole front axle stub as a bolt – tightening everything down – aids in stiffness. The version 1 knuckles will be kept as emergency backups. 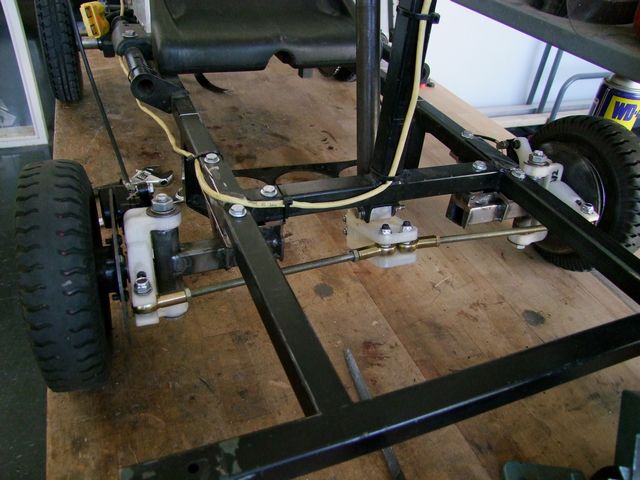 Here is the system reinstalled. This arrangement is of course much stiffer and less prone to #STANCENATION like the nylon bracket. Rest assured that after Detroit, the nylon bracket will make a return.

The last things left to do on CMV are some minor body repair to the curb gouge it suffered at NYMF, and making the 3rd battery pack. Somewhere in there I also intend to upgrade the moxie-getting sound system…

Hopefully the Detroit Maker Faire update will come soon after the event!

In May, I was contacted by Make Magazine for a feature article on Chibi-Mikuvan for their July issue. This is now out and in the wild! Check out the article here.

They sent a real photographer and everything! It made everything seem so…. legitimate.

In a few days, I’ll hopefully be able to post some updates on preparations for the Detroit Maker Faire Power Racing Series race.